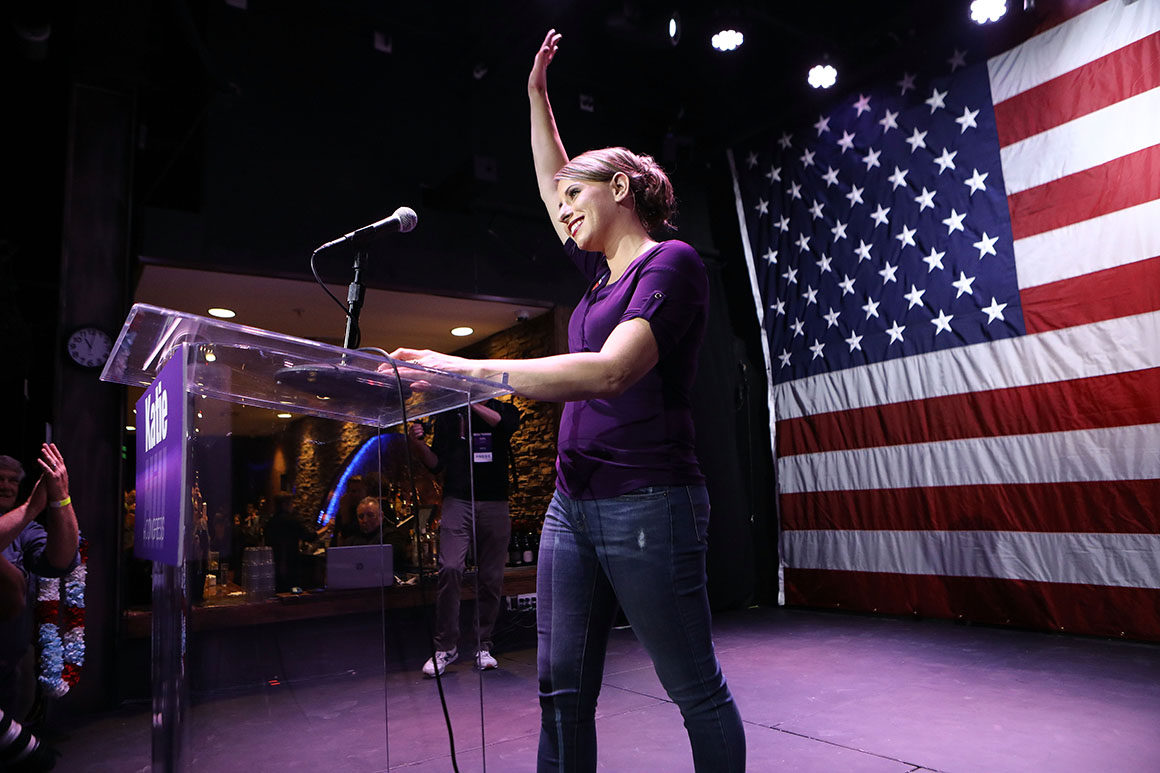 The most vulnerable House Democrats are off to a fast start defending their seats — and their party’s fragile new majority.

Nearly three-dozen Democratic freshmen in battleground districts raised more than $300,000 for their campaigns in the first three months of 2019 — a barometer of early momentum in the seats that could determine control of the chamber in the 2020 election.

Competing with a crowded Democratic presidential field and higher-profile Senate races, the new class of Democrats responsible for flipping control of the House have fought to sustain the torrent of campaign cash, much of it from small donors, that allowed candidates to outspend GOP incumbents in most of the contested House races last year. Now, as incumbents themselves, the eye-popping numbers could help fend off GOP challengers as Democrats attempt to hold their majority while waging war with President Donald Trump on multiple fronts.

Democrats currently hold a 19-seat majority in the chamber, which they won back in last year’s midterm elections after eight years in the minority.

Freshman Rep. Josh Harder (Calif.) pulled in the highest figure among the targeted frontline Democrats, a total of $874,000 — more than triple the average for all House candidates.

“Our supporters and both voters of all kinds realize these aren’t seats that are just going to stay safe,” Hill, who defeated an incumbent Republican in a Southern California district and brought in $608,000 so far this year, said of the first-quarter fundraising blitz. “We all know we’re up for a long fight.”

“That was a question mark for a lot of us — which was, ‘Are we going to be able to keep that energy?’ And I feel like it’s definitely still there,” Hill said of the 2018 blue wave that ushered in her history-making class.

Hill is already facing two challengers, but they declared after the fundraising cutoff and won’t report their contributions until July.

In fact, the first round of fundraising numbers — still early in the cycle — offer more insight about incumbents than the strength of potential challengers. But out of the handful of Republican challengers declared in other seats, three raised notable sums in the first quarter.

Democrats say they aren’t only on defense, and part of their House strategy includes picking off districts Republicans only narrowly held in 2018. Of the 31 GOP incumbents targeted by Democrats, only 15 raised more than $300,000, showing a potential weakness ahead of 2020. And House GOP leaders have sought to fill that gap.

“Republican challengers and incumbents will have the resources necessary to successfully make the case against the socialist policies coming out of Nancy Pelosi’s conference like the Green New Deal and eliminating private health insurance,” said NRCC spokesperson Michael McAdams.

Frontline Democrats can also expect national support. The Democratic Congressional Campaign Committee raised a record amount for a first quarter in an off-year, bringing in $32.5 million — a majority of which came from contributions under $200.

“It’s that first reelect that’s your hardest,” Rep. Cheri Bustos (Ill.), chair of the Democratic Congressional Campaign Committee, said in an interview. “The people who helped get these members here, they’re invested now.”

In a speech to her colleagues at the Democratic retreat in Virginia last week, Bustos told the caucus that they need to control "our energy, our focus and our determination to lockdown our majority."

“We cannot rent these districts for the next two years,” Bustos said. “We have to own them.”

After watching Democrats raise millions through ActBlue, an online small-dollar fundraising platform that’s been around since 2004 but gained new power in 2018, Republicans realized they needed a platform of their own to combat the influx of Democratic cash. The new Patriot Pass platform is still being built.

In addition to the flood of Democratic cash online, Republicans are also wary of mega-donors like former New York City Mayor Michael Bloomberg, who spent more than $100 million in 2018 to help Democrats flip the House, including $11 million in the final two weeks of the election in California alone.

“Michael Bloomberg alone is responsible in many ways for the margin of the Democrats majority,” said Chris Grant, a GOP consultant. “Republicans from [Minority Leader Kevin McCarthy] on down have been laser-focused on that. The leader has taken this on his shoulders.”

By and large, Democratic incumbents are starting to stockpile the cash necessary to defend their seats, though there were some weaker-than-expected showings. Freshman Rep. Jeff Van Drew (D-N.J.) raised only $121,000 in a contested, South Jersey district. Freshman Rep. Dean Phillips (D-Minn.) also raised less than $200,000 in the Twin Cities suburbs, though he supplemented his 2018 campaign with self-funding.

So far, three Republican incumbents have been outraised by Democratic challengers, including two in California, where Democrats are attempting to pick off the state’s final few red districts. Rep. Duncan Hunter, who has been indicted for misusing campaign funds, raised just $93,000. That’s just one-quarter of the $350,00 raised by his opponent, Ammar Campa-Najjar — the most of any Democratic challenger so far.

Rep. Doug LaMalfa (Calif.) — who sits in a more reliable GOP seat — brought in just $87,00 for a rematch against his Democratic opponent from last fall, Audrey Denney, who has already raised $253,000.

The other Republican who has was outraised is Rep. Chris Collins of New York, who pulled in just $5,200 after being indicted on insider trading charges last year. Nearly all of his campaign cash came from GOP-aligned PAC groups, with not one dollar from an individual donor.

Controversial Iowa Rep. Steve King, who was nearly defeated by a Democratic challenger last year, brought in only $62,000 in the first quarter. King’s $18,000 in cash on hand is less than the bankrolls of three of his GOP primary challengers, including state Sen. Randy Feenstra, who had $240,000 in cash on hand.

Two incumbent Democrats have so far been outraised by challengers from their own party, including Rep. Dan Lipinski (Ill.), one of the party’s last anti-abortion representatives. Rep. Stephen Lynch (Mass.), who has spent nearly 20 years in the House, faces a primary challenge in his diverse South Boston district. His opponent, Mohammad Dar, has raised $180,106 — nearly three times more than Lynch’s totals.

In another sign of continued enthusiasm, Democrats hold a substantial fundraising advantage ahead of this year’s closely watched re-do election in North Carolina’s 9th Congressional District.

Dan McCready — the sole Democratic candidate — reported a fundraising haul of $1.6 million, which is more than three times the amount that all of his Republican competitors combined have raised ahead of their GOP primary in May.

House leaders continued to rake in campaign cash in the first quarter, as did some members who have seen their public profiles grow in the Trump era. Minority Whip Steve Scalise (La.) raised more than $4.3 million, while Minority Leader Kevin McCarthy pulled in a total of $3.8 million. And Rep. Devin Nunes (R-Calif.) — the ranking member of the House intelligence committee — raised a stunning $1.2 million on his own, and has nearly $5 million on hand.

That compares to a roughly $4.6 million haul from Speaker Nancy Pelosi (Calif.), and another $1.8 million from the next top-raising Democrat, intelligence committee Chairman Adam Schiff (D-Calif.), a frequent Trump target. Majority Leader Steny Hoyer (Md.) raised $651,000 for his campaign and has raised or contributed $756,000 for other House Democrats.