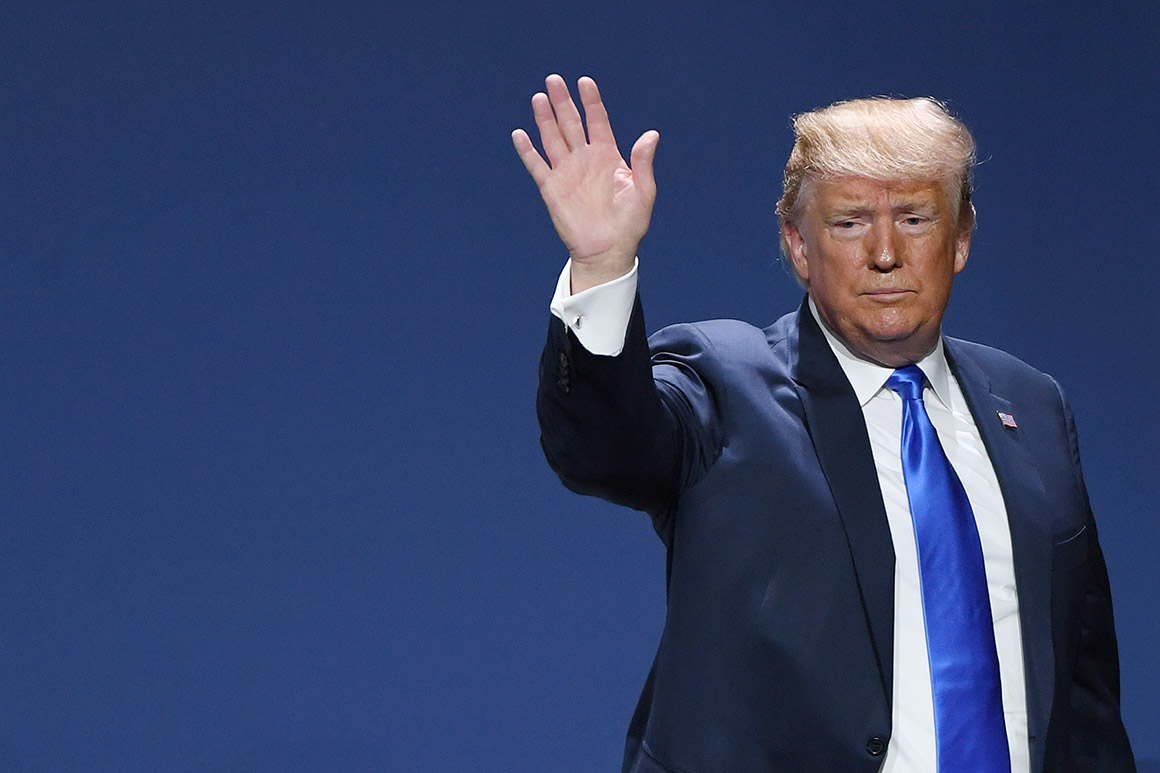 President Donald Trump accused House Democrats of overstepping their bounds by demanding he turn over his tax returns, reposting a tweet from Rep. Jim Jordan declaring that their motives were “purely political.”

It’s one of the first instances of Trump himself indicating hostility to the latest push by House Democrats — even indirectly — rather than his lawyers and aides.

The president immediately dismissed the request for his tax returns but declined to give a full-throated denunciation.

“We are under audit, despite what people said, and working that out,” Trump told reporters. “I’m always under audit, it seems, but I’ve been under audit for many years because the numbers are big, and I guess when you have a name, you’re audited. But until such time as I’m not under audit, I would not be inclined to do it.”

During and after the 2016 presidential campaign, Trump has consistently claimed that he could not release his tax returns — an unspoken but nearly universally respected precedent for presidential nominees — as a consequence of being under audit by the IRS.

He noted last week that the same was still true, as is the agency’s policy for sitting presidents. Trump also told reporters that he would leave the issue up to his lawyers, but said he believed the law would be “100 percent” on his side.

Late last week, a Virginia-based lawyer working for Trump urged Treasury’s general counsel to deny Neal’s request on the basis that there was neither a “legislative purpose” nor a “legitimate committee purpose” for seeking the president’s returns.

“It would be a gross abuse of power for the majority party to use tax returns as a weapon to attack, harass, and intimidate their political opponent,” attorney William Consovoy said.

And on Sunday, acting White House chief of staff Mick Mulvaney and Trump attorney Jay Sekulow also pushed back on the demand.

Mulvaney argued that the question of whether Americans wanted to see Trump’s returns had been “already litigated” during the 2016 campaign. He contended that Democrats would “never” see the president’s returns, adding: “Nor should they.”

Sekulow, meanwhile, asserted that Democrats stood the chance of setting a dangerous precedent of weaponizing the IRS for political purposes.

Jordan, who is a staunch supporter of the president and member of the conservative House Freedom Caucus, wrote in his Saturday tweet reposted by the president that Democrats’ push was “frightening.”

But he added their move “shouldn’t surprise us—same folks used the IRS to target Americans for their political beliefs,” invoking the Obama-era IRS scandal that charged the agency had applied extra scrutiny to conservative groups seeking tax-exempt status.