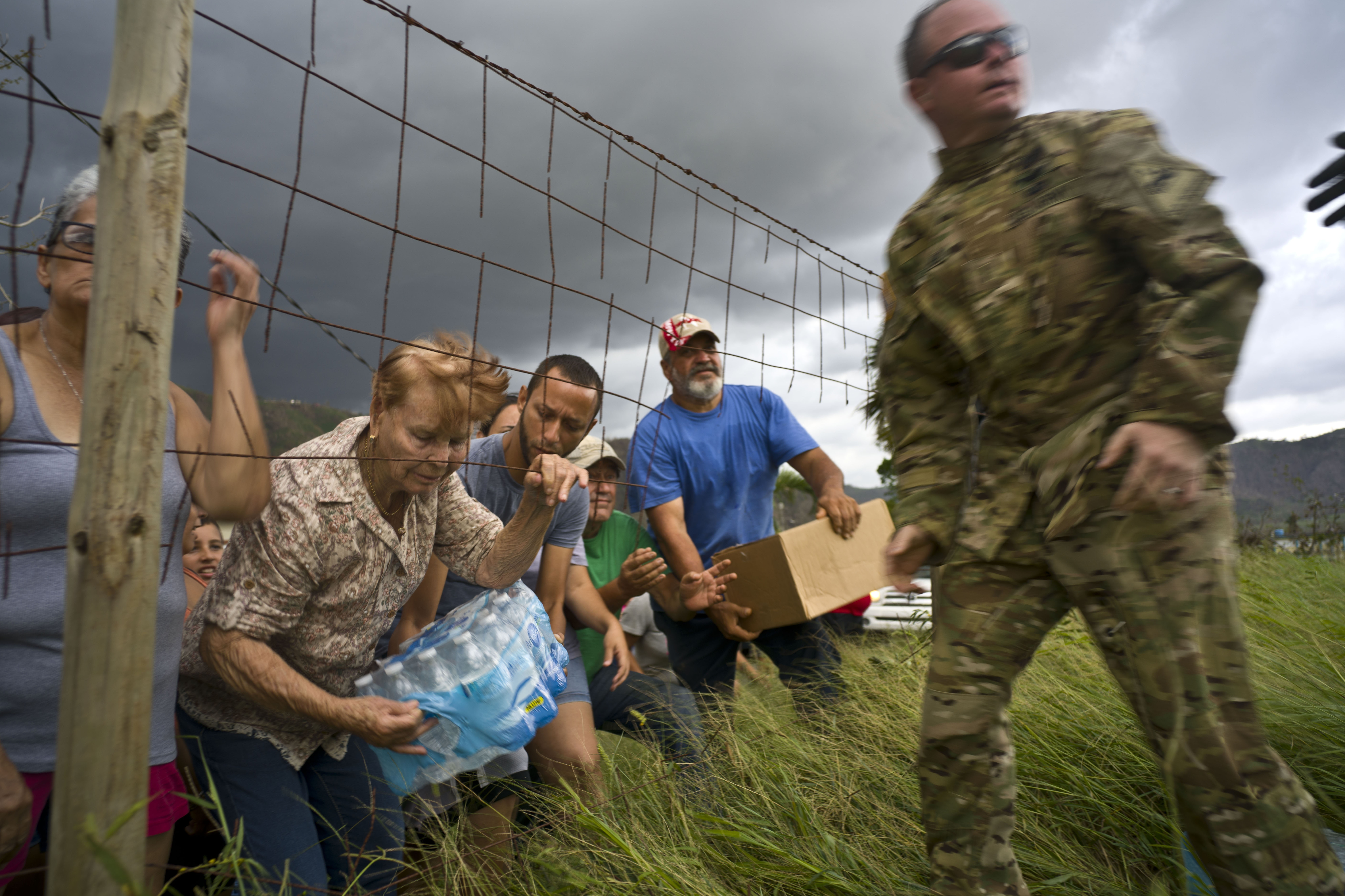 The vulnerable Alabama Democrat urged Trump to accept more money for Puerto Rico as a way to unstick a $13 billion disaster aid bill that’s stalled in the Senate. But Trump so far has been unmoved by pleas from both Democrats and Republicans.

“He doesn’t want to give more money,” Jones said. “I talked about the fact that we need to get more money to get this [package] across the finish line for Puerto Rico … He made his case. And we talked. I think there’s still some leeway there.”

Democrats blocked a GOP plan earlier this week because they wanted millions more for Puerto Rico than the $600 million in nutrition aid that Trump has begrudgingly accepted. Similarly, the GOP stopped a House-passed disaster aid bill.

Meanwhile Puerto Rico is running out of food assistance, the Southeast is reeling from hurricanes and the Midwest is struggling with floods.

In addition to the immediate humanitarian impact, there are broader political and policy implications from the impasse, especially if the massive bill isn’t completed soon. In particular, Senate Democrats campaigning in Iowa for the presidency are almost certain to be pressed on why they haven’t delivered flood relief.

Democrats running for president “need to remember that as they’re swinging through Iowa trying to appeal to Iowa voters, that they voted no in a time of disaster when they really need that aid,” said Sen. Joni Ernst (R-Iowa).

The bogged down disaster aid bill could also be a worrying sign of things to come. Congress will need to cut a big budget deal and raise the debt ceiling — while also facing another border wall and shutdown fight — not long after the August recess.

“If this posture goes on, then it doesn’t bode well for the fall,” said Senate Appropriations Chairman Richard Shelby (R-Ala.).

There was no sign of tangible progress in the Senate on the bill as senators rushed home for the weekend on Thursday afternoon. In public and private, the president has ridiculed the island as a “mess” with “incompetent” leaders and vowed not to support more money after signing off on the nutrition aid. Now senators are working directly on Trump.

Sen. Marco Rubio (R-Fla.) said in an interview he has argued to the president that he could seek Senate confirmation of Puerto Rico’s oversight board to more closely manage the territorial government’s finances.

“That should give the president confidence that any future funding could be done appropriately,” Rubio said. “My best hope is to use the oversight board angle to get the White House in a place where they’ll be comfortable doing more.”

Senate Minority Leader Chuck Schumer (D-N.Y.) has offered a $16.7 billion proposal with more aid for Puerto Rico and the Midwest and urged GOP leaders to simply try to roll the president.

But Republicans have argued that the president will not sign the bill as written and so they won’t support it. In fact, one Republican familiar with the negotiations said Trump may ask for more border security money if the Senate tries to increase funding for Puerto Rico.

The stalemate is casting a pall over a Senate that’s spent the week mired in partisan recriminations after Republicans invoked the “nuclear option” and unilaterally changed Senate rules to brush off Democratic delays of Trump nominees.

Congress leaves for a two-week recess in mid-April, and without a deal, the consequences could be grim.

Rubio said that Puerto Ricans’ food money is now running out and towns in Florida are grappling with budget deficits from hurricane clean-up. He suggested that the Senate should pass the SNAP money for Puerto Rico immediately and work out the larger package right after: “SNAP has to happen. That money has already run out.”

Sen. Robert Menendez (D-N.J.) had been urging his party to stay united and not short Puerto Rico even though they could have voted for the Shelby bill and gone to conference with the Democratic House. With Trump’s increasing attacks on the island, members of his party decided they would push for more relief in solidarity with Puerto Rico. Jones was the only Democrat to support the GOP proposal earlier this week.

“There’s not going to be an ultimate bill if there’s not more money for Puerto Rico,” Menendez said, adding that Democratic presidential contenders would be unlikely to face political consequences for their hardline stance: “I went through this with [Hurricane] Sandy where Republicans wouldn’t cast a vote for us. They paid no consequences.”

Sen. Johnny Isakson (R-Ga.), who has been speaking regularly with the president about disaster aid for his state, said he thought the deal was done with Senate Appropriations ranking member Patrick Leahy (D-Vt.) two weeks ago. Isakson spoke to Trump, who signed off on the nutrition aid and said “I’m over Puerto Rico. Do the deal and get it done,” but warned he would go no further.

But it wasn’t enough for Democrats.

Yet like all things in Washington these days, Trump has become more central to the negotiations than two old bulls like Leahy and Shelby. And his antagonism toward Puerto Rico seems to have emboldened Democrats who in the past have quickly signed off on disaster aid bills.

The muscle memory of Democrats voting for hurricane and wildfire relief was on full display on Monday as Isakson desperately tried to whip votes for the GOP proposal. Sen. Dianne Feinstein (D-Calif.) initially voted for the measure, then after chatting with Schumer, switched her vote to a no in solidarity with other Democrats.

“I’ve never had this much trouble with a bill like this. I don’t know what’s behind it,” Isakson said. “A lot of people will get hurt if we don’t get this done.”