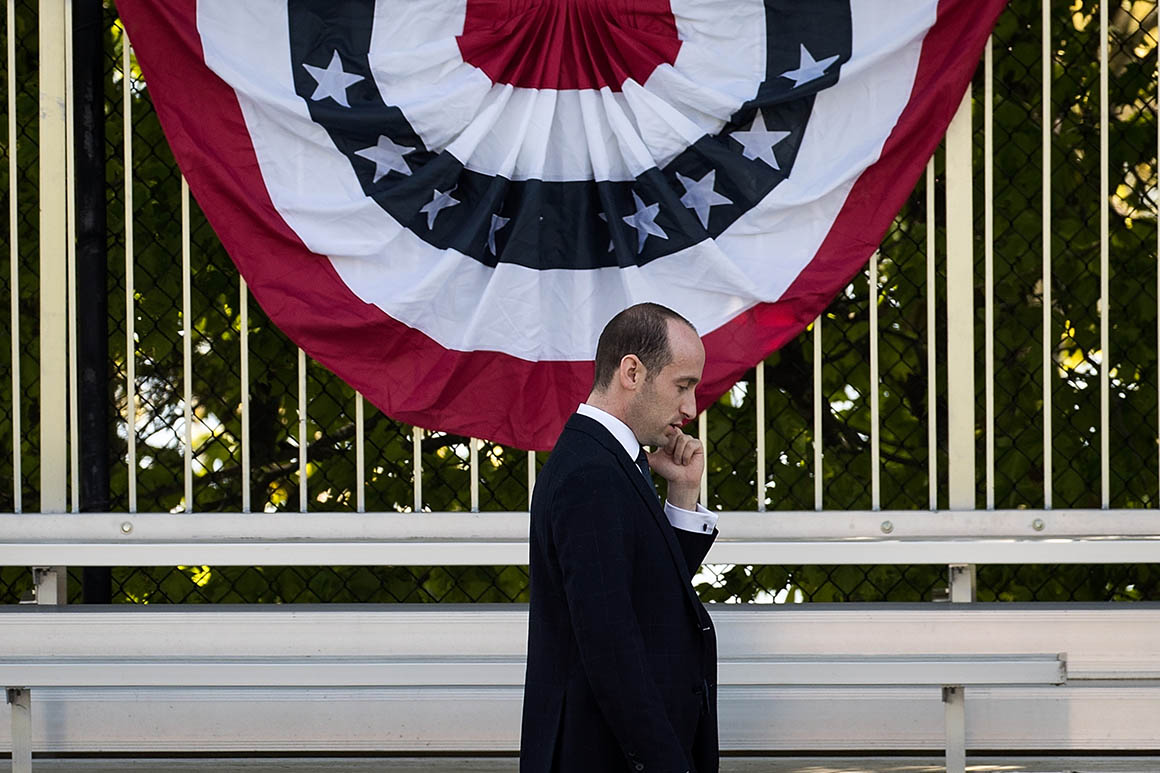 In the summer of 2017, a group of White House aides were in Paris, enjoying some rare downtime during Donald Trump’s first trip to France as president.

As the Trump officials soaked up a July evening along the banks of the Seine, one stepped away to take a phone call from the U.S. It was Stephen Miller, the president’s then 31-year-old chief policy adviser, speechwriter and hardline immigration policy advocate.

As the other officials looked on, Miller spent several minutes loudly pressing administration officials on the other end of the line to deport an individual who had been detained by immigration authorities.

The episode, recounted by two former administration officials with direct knowledge of the matter, struck some of Miller’s colleagues as bizarre. They were familiar by then with Miller’s volatile temper, and of his central role in Trump’s immigration policy. Even so, the effort by a young White House aide to dictate the fate of a single detainee was a startling sign of his deep involvement in the federal government’s immigration system.

The one-time Senate aide is a key architect of Trump’s tough immigration policies — a controversial role affirmed when he helped engineer a recent purge of Department of Homeland Security officials deemed too soft on border security. Miller has helped shape several explosive Trump actions, including an early 2017 executive order banning travel from several Muslim-majority nations and Trump’s crusade for a Mexican border wall. Most recently, he has backed an idea to relocate undocumented immigrants to “sanctuary cities” within the U.S., a scheme that has been described as political retribution by Democratic opponents.

While Miller’s influence over immigration policy is well-known by now, less understood is his granular interest in the people crossing the U.S. border, and the seemingly unprecedented steps he has taken to reveal information about their personal backgrounds.

Soon after Trump took office, for instance, Miller began calling U.S. Immigration and Customs Enforcement (ICE) officials to insist that they include more details — such as full names and pending criminal charges — in press releases about immigrants they had apprehended, detained or planned to deport, according to three current and former DHS officials.

“At one point, he wanted us to be releasing press releases every day about the people we had detained and their criminal status. We were constantly doing a dance just to remain in a legal place,” recalled a former DHS official.

U.S. officials say that such a thing had never been done. Unless the individuals had been convicted or charged, releasing such information could constitute a breach of privacy and possibly deprive them of a fair hearing, according to Leon Fresco, an immigration attorney and senior Justice Department official under President Barack Obama.

But a little-noticed provision in a January 2017 executive order crafted during the presidential transition with Miller’s input gave the administration a potential defense against accusations that the government was violating undocumented immigrants’ privacy rights. The provision required that federal agencies write new rules that “exclude persons who are not United States citizens or lawful permanent residents” from protections under a federal privacy law. DHS subsequentlyupdated its policies in April 2017.

Administration officials largely resisted Miller’s efforts. But there were nonetheless signs that his push to more vividly illustrate what he views as the threat of undocumented immigrants had an impact. In July 2017, for example, DHS and Justice Department officials participated in a White House press briefing in which they displayed images of tattoos belonging to MS-13 gang members, including enough of the face of one alleged gang member to identify him. The officials also discussed specific ongoing criminal cases involving alleged gang-related violence.

Former acting ICE director Tom Homan told POLITICO that he and his colleagues often participated in discussions “at the department level about what we could and could not release about people.”

But Homan, who is in the mix of candidates currently being considered to lead DHS, said he did not recall specific requests for more information from Miller during his previous tenure at the agency.

Others describe a different reality, saying that Miller’s interest in fine-grain elements of immigration policy lead him to pressure mid- and low-level bureaucrats who would not ordinarily be hearing from one of the president’s most senior White House aides.

A former DHS official said Miller was often on the phone with administration officials at all levels. He typically pressures them about changes to immigration rules and regulations, and demands stepped-up enforcement. But he also sometimes takes interest in individual cases.

“We tried to protect as many people from Miller and his requests as possible,” said the former DHS official. “When he started going lower and calling random career officials, we would have to go and say, ‘If Stephen calls you, elevate it immediately and do not answer.’”

Miller has personalized immigration policy in White House debates as well. As POLITICO reported in August, the Trump aide has often launched meetings with specific horror stories about innocent Americans assaulted or murdered by noncitizens. “‘We must save Americans from these immigrant criminals!’” a former NSC official recalled Miller saying in an internal meeting. 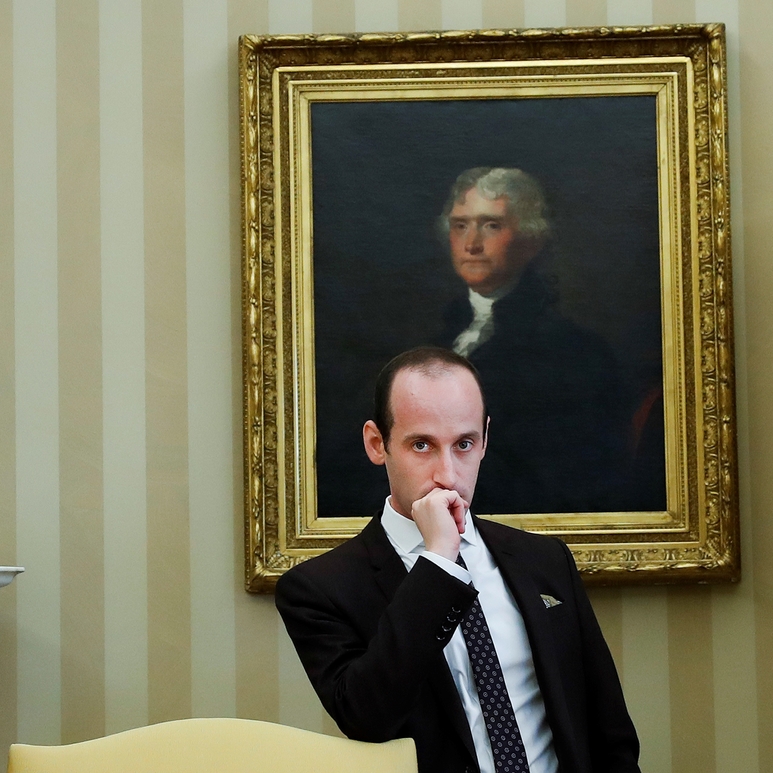 Several officials protested Miller’s efforts, arguing that the office was intended to support victims and their families — not to demonize immigrants by disclosing details about the crimes some committed.

Year-end figures provided by ICE showed that the agency conducted 158,581 arrests during fiscal year 2018, which included 105,140 individuals with criminal convictions and another 32,977 with pending criminal charges. However, the agency does not differentiate between violent and non-violent offenses.

The White House has repeatedly cited arrest figures from ICE in attempts to draw a link between undocumented immigration and violent crime. Trump even claimed during his February State of the Union address that “thousands of Americans have been brutally killed by those who illegally entered our country,” though he offered no data to support the claim.

Some White House allies who support Trump’s immigration agenda say there’s nothing troubling about Miller’s enormous involvement in DHS affairs. His supervision is necessary, they claim, since many career DHS officials appear bent on subverting the president. They add that Miler isn’t freelancing; he’s implementing an agenda outlined by the president himself.

“The only reason this might be unusual for immigration is because prior White Houses didn’t care about it to the extent that Trump’s does,” said Mark Krikorian, executive director of the Center for Immigration Studies.

Krikorian added that “direct pressure from the White House is even more important because so much of the bureaucracy on the immigration issue is attempting to prevent the president’s goals from being carried out.”

The White House and Miller did not respond to requests for comment.

Miller’s defenders at ICE and other parts of the administration say the 2017 executive order changing privacy law made it easier to defend the arrest or deportation of undocumented immigrants with criminal histories.

The new policies can “level the playing field in the media with some of these high-profile cases where ICE can get accused of picking on somebody because they’re an activist,” said a current DHS official, “when if you looked at the criminal history and other derogatory information, there’s certainly another reason that ICE would have interest.”

That effort began almost right away. Internal Trump administration emails obtained by Vanderbilt University Law School students and published by The Intercept in late 2017 reveal how ICE officials around the country were pressured to highlight criminal records of people they had detained: “Please put together a white paper covering the three most egregious cases,” an ICE official wrote in one email to agency offices around the country. “If a location has only one egregious case — then include an extra egregious case from another city.”

Some in DHS are deeply uncomfortable with any effort to use the government’s resources to paint individual migrants as dangerous.

“There has to be some compelling reason for why you’d want to do it and nothing I’ve heard rises even remotely to that level,” a former DHS official said. “You’re talking about the federal government spotlighting a particular individual. There’s something wrong about that.”

A former White House official said Miller has also pushed for the White House press shop to release more regular press releases and statements about the number of migrants who were apprehended at the border — especially those with potential criminal histories.

“Miller very much wanted, by any means possible, to draw public attention to the actions of people who were here illegally,” the former White House official said.

“It’s not an overstatement to say Stephen Miller wakes up every morning thinking about illegal immigration and goes to sleep thinking about it as well,” this person added.