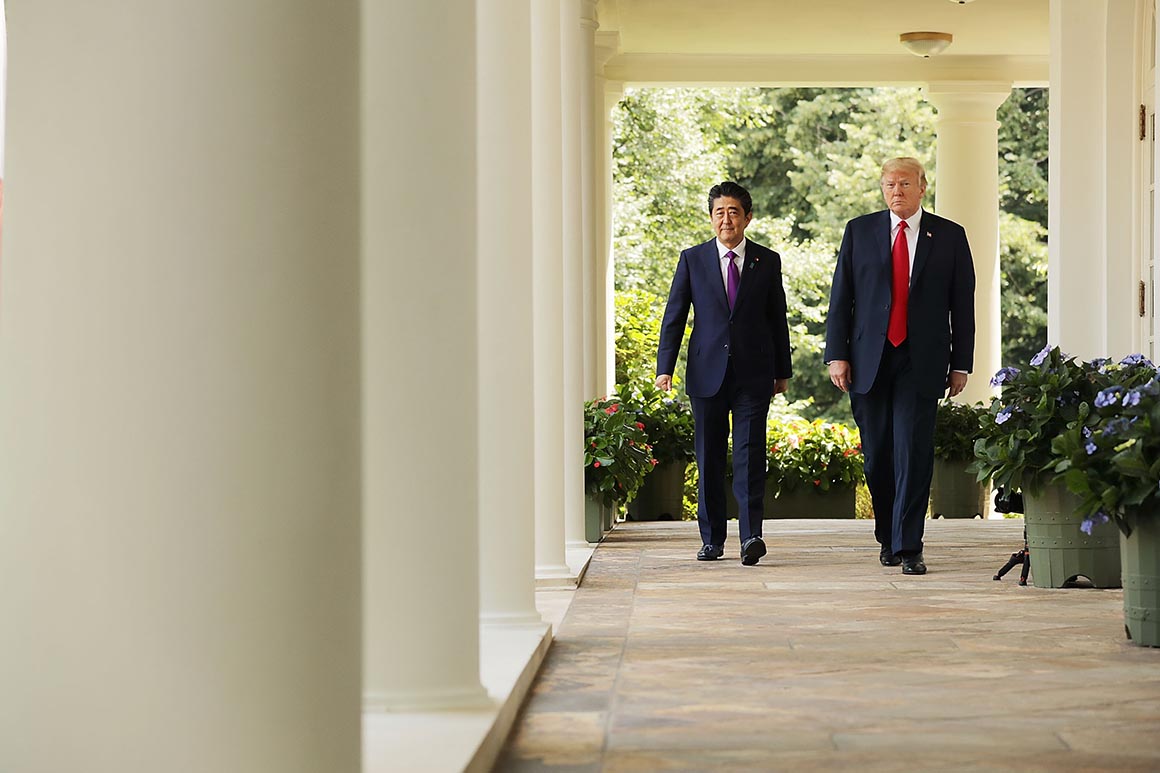 Donald Trump and his team surely figured Japanese Prime Minister Shinzo Abe would be an easy mark in U.S.-Japan trade talks. No world leader, after all, has subjugated himself more to the dealmaker in chief than Abe. Abe has presented Trump with golden gifts; the two have golfed together; most recently, Abe invited Trump to be the first world leader to meet Japan’s new emperor in May. Not to mention Abe’s letter reportedly trying to nominate Trump for the Nobel Peace Prize.

But things didn’t go as planned last week as the leaders of the No. 1 and No. 3 economies in the world met in Washington. There are already signs Trump won’t find Japan the compliant partner he expects—and his own policies might be to blame.

Trump and Abe were discussing a bilateral trade deal intended to narrow the $60 billion U.S trade deficit with Japan, a deal Trump has said will “be something very exciting.” Since the 1980s, Trump has been a vocal critic of Japan’s export industry, particularly cars, and as president, he hopes to swing the trade relationship in America’s favor. According to Japanese media reports, however, Abe quickly balked on some key points: He resisted Trump’s demand at their meeting for quick access to Japan’s agricultural market; he made clear that Tokyo wants currency issues set aside for now; and he said Japan expects concessions from Washington, too.

Trump put on a brave face after the talks. His administration’s efforts, he insisted on Saturday, are “moving along very nicely.” But the reality is that Tokyo’s negotiating position has grown stronger over the past year as Trump has imposed tariffs and upended global supply chains—and the president is learning the hard way just how much his improvised approach to trade could leave him vulnerable to any negotiator who watches carefully.

It might seem as though the Japanese prime minister is suddenly hardening his stance, from Trump lapdog to proud nationalist, but Abe’s obsequiousness has been about tactics. The strategy with this president, as any observer of Trump now knows, is to avoid antagonizing the White House or drawing Trump’s wrath on Twitter. Abe seems to be doing just this so that he can in fact pursue Japan’s economic interests. Abe isn’t girding for a fight so much as trying to keep the peace without appearing to give in too much. And so far, it appears to be working.

Looking back over the past year, Abe’s strategy becomes clear. All along, he has hedged his bets in dealing with Washington. While Trump was slapping tariffs on steel, aluminum and $200 billion-plus of Chinese goods last year, irking allies, Abe was burnishing Japan’s free-trade bona fides. He signed the world’s largest free-trade deal with the European Union. He stuck with the Trans-Pacific Partnership, on which Trump reneged.

As if to amplify the point, Abe flew right to Ottawa on Sunday after his trip to Washington. In Canada, he and Prime Minister Justin Trudeau toasted their economies having “benefited tremendously” from the renamed TPP, the Comprehensive and Progressive Agreement for Trans-Pacific Partnership, which comprises 11 Asia-Pacific countries representing 500 million consumers. Trudeau didn’t mention Trump when stressing the “benefits of countries working together and not falling back on protectionism as a way of growing our economy.” But the point was clear. Abe similarly said the deal “should be a model going forward” for developed nations.

Abe’s economic minister and lead trade negotiator, Toshimitsu Motegi, has little choice but to go through the motions with Trump’s point man, U.S. Trade Representative Robert Lighthizer; Trump is threatening to impose 25 percent levies on imports of cars and auto parts, a move that would slam Japan’s key industry. Yet Japan’s top trading partner is now China, not the United States. Add in Abe’s deal with the European Union and efforts to strengthen trade links with Southeast Asia and India, and Japan is more diversified than ever. That gives Tokyo leverage to ask Trump for bigger concessions, such as scrapping existing levies on light trucks and cars. Or, Japan could drag its feet on a bilateral U.S. deal, in the hopes that American voters elect a more trade-friendly leader in 2020.

Abe is also well aware of Trump’s political vulnerabilities, and apt to exploit them to force Trump to accept a less sweeping deal. The U.S. president’s approval rating dropped by 5 points after the release of special counsel Robert Mueller’s report in April, and talk of impeachment is still in the air. This suggests Trump is eager for a win on the international stage. Meanwhile, Abe’s team knows American voters in the agricultural sector are hurting amid the trade war. “There’s significant concern among the U.S. agriculture industry that its market share in Japan will be taken,” says Ichiro Fujisaki, a former Japanese ambassador to Washington. So far this year, U.S. pork shipments to Japan are down 35 percent. Barley farmers also are losing contracts to Japan. These dynamics are likely to increase Abe’s ability to play hardball. One likely ask: that Washington phase out the current 25 percent levies on imports of light trucks and 2.5 percent tax on Japanese car imports.

Abe has also wisely reminded Trump that since he moved into the White House, Japanese companies have invested $23 billion in the U.S. economy. The 43,000 jobs Abe says that money is creating could always go elsewhere. According to the Nikkei Asian Review, a disproportionate amount of that $23 billion has been targeted at Trump country: Indiana, Michigan, Ohio, Pennsylvania, Tennessee and West Virginia. Push Abe too hard, and those investments could always be rerouted to Mexico and Canada.

Finally, Abe has been strategic in studying how China has played Trump. For all the Art of the Deal bluster, details aren’t a Trumpian hallmark. Nor is strategy. Chinese officials, President Xi Jinping included, plan in terms of decades. Trump is all about the next tweet. Xi’s team has exploited Trump’s short-termism and seems to be waiting out the clock for a watered-down trade deal between the two countries. Trump’s team is backing away from demands that Beijing stop subsidizing state enterprises, for instance. And Xi’s negotiators have whittled Trump’s “enforcement mechanisms”—such as forcing Beijing to grant the Trump administration broad monitoring capabilities—to mere talking points. The final deal with China probably won’t include strong protections against intellectual property theft, either.

China will probably promise to buy more U.S. goods and agree in principle not to manipulate its currency to boost exports. Both are low cost ways for Xi to get the “America First” crowd off his back. Yet they’re high-cost reality checks for those favoring wholesale changes to China’s illiberal capitalism model in order to level the playing field internationally. Xi will have a free hand to pursue his “Made in China 2025” vision, a state-sponsored plan for China to modernize its tech manufacturing. As Trump attempts to pull America back to the 1980s, when the United States wielded vast industrial power around the globe, China is investing hundreds of billions of dollars in dominating industries including energy innovation, software, semiconductors, aerospace, self-driving vehicles, biotechnology and artificial intelligence by 2025.

Whatever happens with China, Trump will declare a big victory and pivot to Japan. On the one hand, Abe has positioned Japan as an ally in Trump’s efforts to contain China’s influence. The idea, says Scott Seaman of the Eurasia Group, is to “showcase the work Japan is doing to support the efforts of the U.S. and other countries to address problematic Chinese commercial and trade practices.” On the other hand, Trump’s climbdown on China won’t be lost on Abe. “Team Trump has lurched from concession to capitulation in trade talks with China,” Temple University’s Kingston says. “This fiasco has to hearten Team Abe as it fends off Trump’s ’80s-era trade nostalgia.”

In other words: Trump might be surprised to find Abe is more willing to push back than roll over.