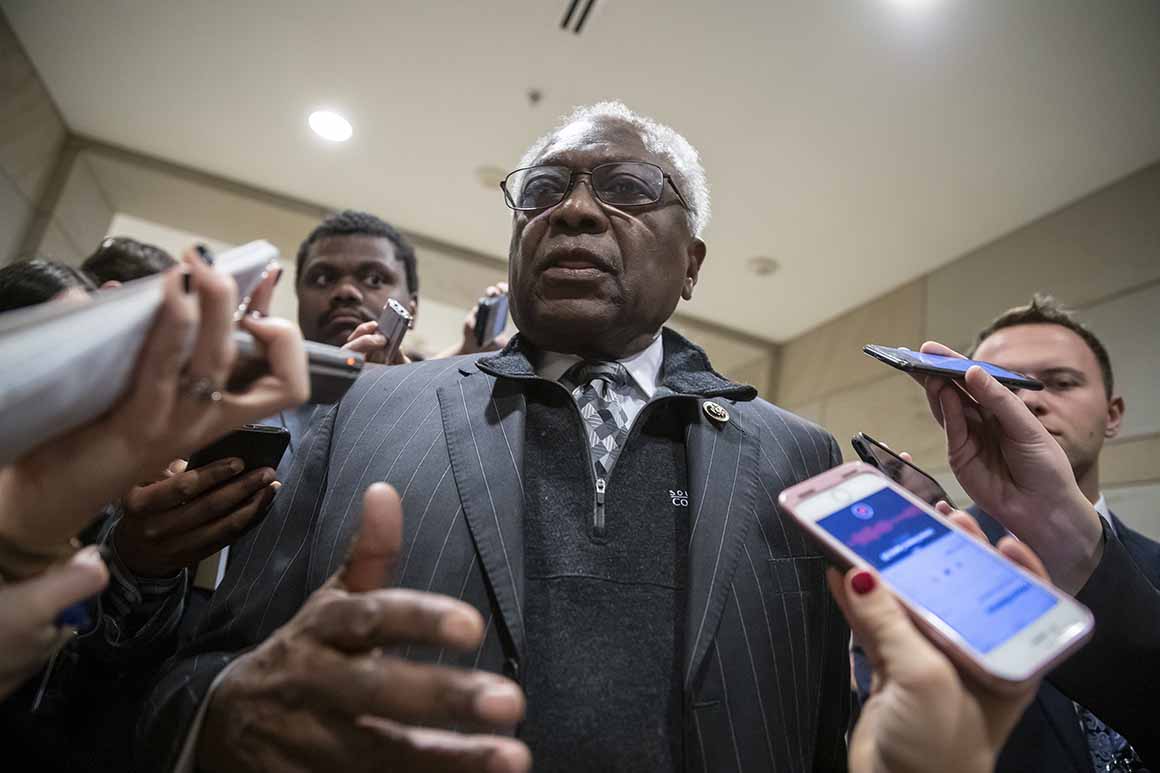 House Democrats have shelved plans to advance legislation protecting “Dreamers” next week, delivering a setback to the caucus on a top legislative priority.

The bill is stalled because of an intraparty fight over providing citizenship to undocumented immigrants with criminal records, multiple lawmakers and aides said Thursday, and a likely committee vote is now delayed.

“Always issues when it comes to immigration, but we’ll get through it,” House Majority Whip Jim Clyburn (D-S.C.) said in a brief interview after attending a meeting with the Congressional Hispanic Caucus on Thursday. “I hope it’ll get to the floor.”

The legislation, known as the Dream Act, is now on hold, with Democrats scrambling to draft language that can secure enough votes in committee and on the floor without exposing further divides within the caucus on the thorny issue.

“Within the party there are moderates and progressives and we all have different opinions. I’ll just leave it like that,” said Rep. Henry Cuellar, a moderate Democrat who represents a district along the U.S.-Mexico border. “We intend to put something on the floor so I’m definitely supportive of that. But if we have to work any language out, we’ll work that language out.”

House Majority Leader Steny Hoyer (D-Md.) said earlier this week that it’s possible the Dream Act could hit the floor this month. But that timeline is influx amid ongoing issues with the bill, which would provide a path to citizenship for more than 2 million undocumented immigrants who came to the country as children.

Hoyer said Thursday there are some “obvious differences of opinion” but believes it will ultimately pass the House.

“I think this is getting a lot of consideration, a lot of discussion,” Hoyer said in an interview. “The objective, obviously, will be to report a bill favorably out of committee, and then on the House floor.”

The House Judiciary Committee had not formally announced that it would be voting on the bill next week, and it could still consider it, if immigrant-rights advocates indicate their support for changes to the legislation.

Some Democratic sources downplayed the delayed Judiciary markup, pointing out that the committee has had a busy schedule as it handles the fallout from special counsel Robert Mueller’s Russia investigation.

But senior Democrats are also worried that Republicans could weaponize the Dreamers bill on the floor and force immigration votes on amendments that could be tough for swing-district Democrats to oppose.

Those GOP amendments, known as motions to recommit, have plagued Democrats since they took back the House in January. Democratic leaders are particularly sensitive to the possibility of Republicans scoring a procedural win — and sowing further conflict within the Democratic Caucus — on one of their marquee pieces of legislation.

“We want to see the bill go through as written, and not get distracted by sideshows,” said Rep. Mark Pocan (D-Wash.), co-chair of the Congressional Progressive Caucus. “We’re just trying to get people to understand what the MTR is and not have us get lost in the details.”

Republicans took a similar approach in February on a gun control bill that succeeded in dramatic fashion. GOP leaders forced Democrats to vote on an amendment that would have notified Immigration and Customs Enforcement if an undocumented immigrant tried to purchase a firearm.

Twenty-six Democrats broke rank to support the GOP’s language, depriving the party of a total political victory on the day that they passed universal background checks.

“You know you’re going to lose members on immigration right now but who and how you do it is important,” said a Democratic aide.

But some Democrats worry the language in the bill is too broad and want to consider changes so that committing only certain misdemeanors would allow people to remain on the path to citizenship.

The prospect of further narrowing access to citizenship, however, has inflamed immigrant-rights supporters and some liberal lawmakers.

This issue came to a head at a meeting of Judiciary Democrats Tuesday where Rep. Pramila Jayapal said it would be hard for her to back the bill if changes are made that are opposed by immigrant-rights groups, according to multiple sources.

Jayapal’s office disputed that, with an aide saying, “She is not publicly or privately threatening to pull any kind of support.”

Now lawmakers are waiting to hear from prominent advocacy groups, including United We Dream, on what tweaks they could support to allow the bill to move forward.

Bruna Bouhid-Sollod, a spokesperson for United We Dream, said the group “wholeheartedly” supports passage of the bill but did not comment on whether the group would support potential tweaks to the current bill to make it more palatable to moderate Democrats.

Roybal-Allard also declined to comment on potential amendments under discussion, but said in a statement she was committed to bringing the bill to the floor.

“I am looking forward to the Judiciary Committee’s consideration of my bill, when every committee member will have the opportunity to express their views about the bill and suggest revisions,” Roybal-Allard wrote in a statement, adding that her bill would be “a historic victory” for Dreamers and for Democrats.