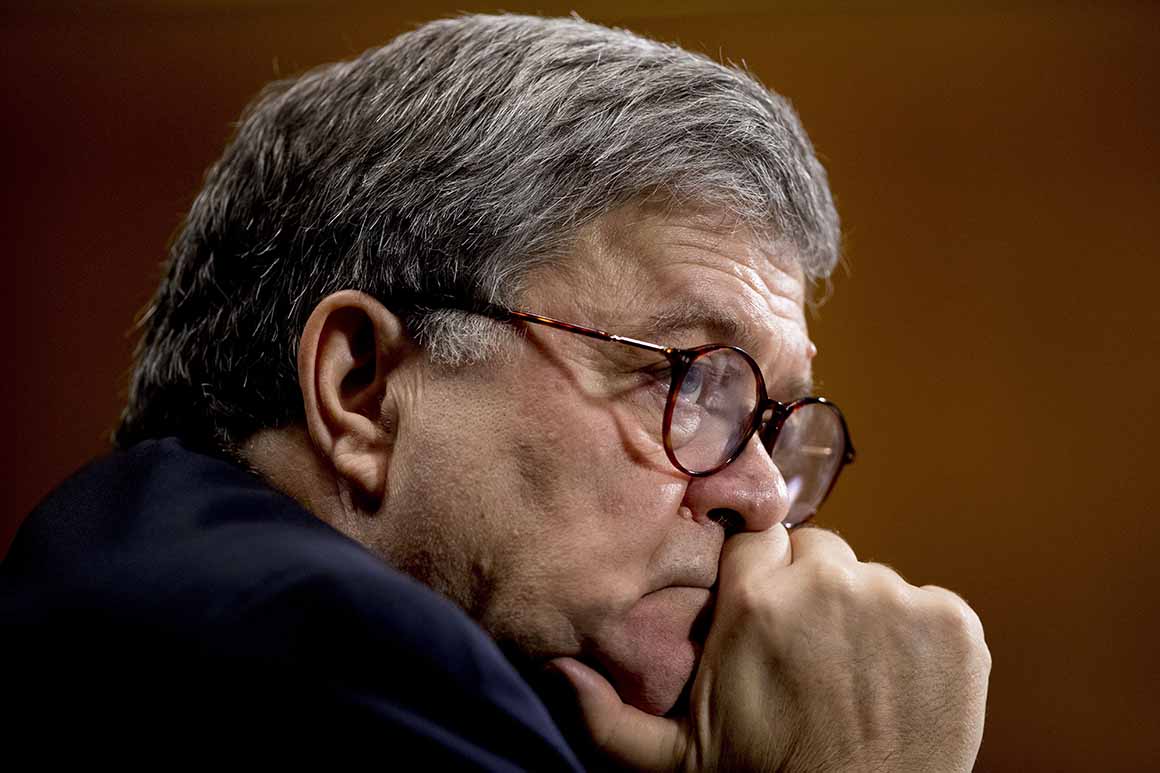 Democrats are unwilling to impeach President Donald Trump for now, so they’re throwing all their pent-up fury at the next best target: Attorney General William Barr.

House Democrats have transformed the conservative GOP legal fixture into their all-purpose political foil. They’ve subpoenaed Barr, are preparing to hold him in contempt of Congress, want to battle him in court, have called for his resignation or impeachment, suggested fining him and are even musing about criminally referring him to his own Justice Department.

“All options are on the table,” said Rep. Ted Lieu (D-Calif.), who noted the irony of referring the attorney general, effectively, to himself for criminal proceedings.

The all-of-the-above attack on Barr is an outlet for Democrats who are furious with Trump but unprepared to impeach the president himself. Their anger with the attorney general is mostly rooted in Barr’s handling of special counsel Robert Mueller’s report on Russian interference in the 2016 election, which laid out a methodical case that Trump attempted to obstruct his investigation repeatedly.

Speaker Nancy Pelosi, who has worked to contain impeachment fervor, told colleagues Thursday she believes Barr committed “a crime” when he testified to a House committee last month, opening a new line of attack that House Democrats eagerly embraced. Pelosi intends to defer to committee leaders about how to handle Barr, aides say. But the allegation has rank-and-file Democrats increasingly saying Barr should face criminal sanctions for his behavior.

The allegation prompted a sharp retort from a Justice Department spokeswoman, who called Pelosi’s comment “reckless, irresponsible and false.” Barr’s predecessor, Jeff Sessions, was investigated by Mueller for potential perjury to Congress during his confirmation hearing, though the special counsel concluded he couldn’t prove Trump’s first attorney general was “willfully untruthful.”

House Judiciary Committee Chairman Jerry Nadler (D-N.Y.) has indicated he intends to give Barr "one or two" days to consider complying with Democratic demands — a proposition the Justice Department all but ruled out in a harsh rebuke of the committee on Wednesday. A contempt citation could be considered by the committee as soon as May 8.

"We must do all we can in the name of the American people to ensure that when the Trump administration ends we have as robust a democracy to hand to our children as was handed to us," Nadler said.

House Democrats say Barr has led what amounts to a cover-up, publicly ruling that Trump did not obstruct justice while keeping Mueller’s detailed evidence secret for nearly a month. On Wednesday, Barr snubbed a Democratic subpoena for Mueller’s unredacted findings and underlying evidence, and he skipped a Thursday hearing meant to discuss those findings, complaining about Democrats’ plan to use committee counsel to question him.

“What we are witnessing is the slow loss of our democratic republic and we can either allow it to happen or we can stand up against it,” said Rep. Hakeem Jeffries (D-N.Y.), the chairman of the House Democratic Caucus, of Barr. “We are not going to allow the notion of a presidential dictatorship to take hold.”

The White House has mounted a campaign to aggressively combat House Democrats — both by defending Barr and repeating calls for Nadler and House Intelligence Committee Chairman Adam Schiff to resign.

Steven Groves, a deputy press secretary handling oversight issues for the White House, held a conference call with Trump surrogates after Barr finished testifying before the Senate Judiciary Committee Wednesday, claiming that no Democrats managed to “lay a glove on him,” according to a person familiar with the call.

Legal experts — even those who are no fans of Barr — cast doubt on the notion that he could be nailed for perjuring himself to the House.

“The Attorney General’s testimony yesterday, with his flagrant obfuscations and open contempt for his questioners, shamed the office he holds,” said Sam Buell, a former federal prosecutor and law professor at Duke University. “However, as a legal matter, it can be miles from obfuscation to provable perjury, and from displaying contempt for one’s questioners to being held in contempt.”

“It is going to take more to dislodge him, if that is what the Democrats in the House are after,” added Buell, who worked with Mueller prosecutor Andrew Weissmann on the case against Enron executives.

Sol Wisenberg, a former deputy on Kenneth Starr’s independent counsel investigation into President Bill Clinton, called it “suicidal” for Democrats to consider impeaching Barr and said there’s no conceivable way his remarks to the House could be construed as perjury.

Still, Democrats are scouring their history books in search of ways to hold Barr accountable. Some have even floated the notion that they could dust off a little-used congressional power known as “inherent contempt," the ability of lawmakers to fine and even jail officials deemed to be in contempt of Congress.

“We haven’t used it since Teapot Dome, doesn’t mean we can’t. I’m all for reviving it," said Rep. Gerry Connolly (D-Va.), a member of the House Oversight Committee, referring to the Warren Harding administration bribery scandal from the early 1920s. "We have, as you know, jurisdiction over the District of Columbia, and they have a beautiful jail with plenty of room. So I think that would be just perfect for some of these people to contemplate their actions.”

Anita Kumar contributed to this story.