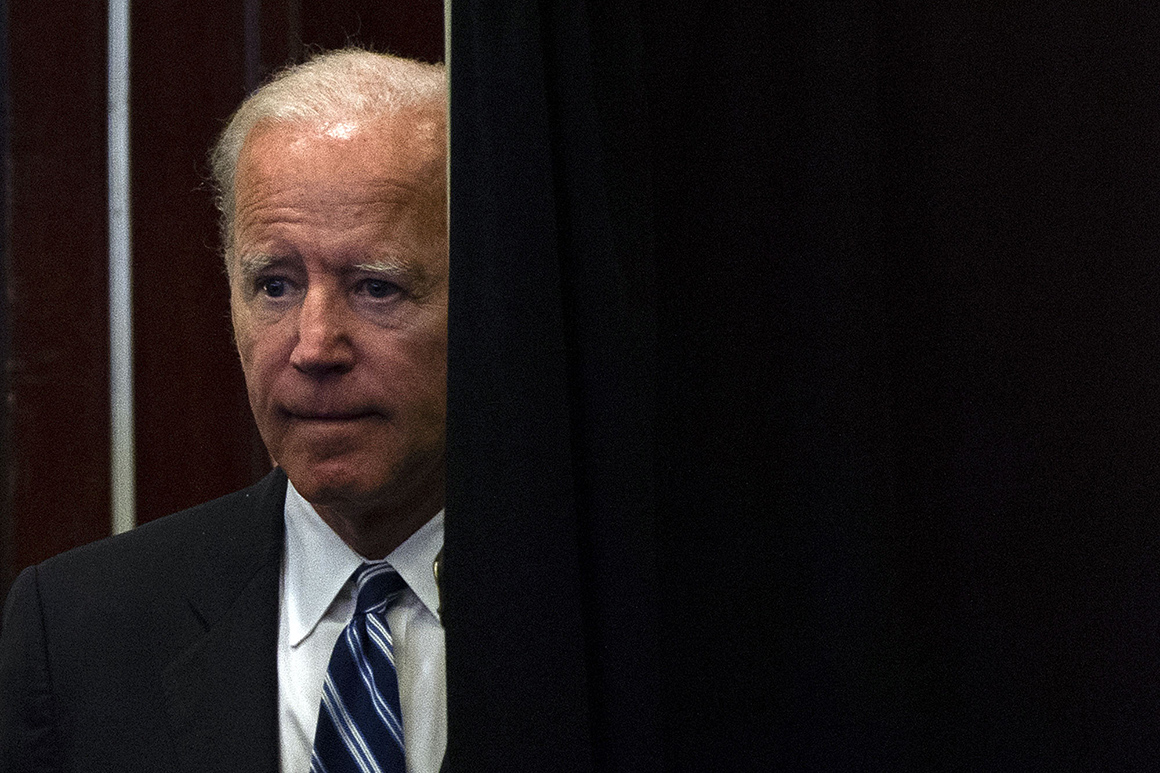 Joe Biden’s campaign kickoff was designed to showcase his blue-collar appeal: A rally at a Teamsters hall in Pittsburgh where he railed against Wall Street and demanded that a local employer "stop the union-busting."

But one staple of Democratic stump speeches heard across the Rust Belt was missing: “Middle-Class Joe,” as he’s dubbed himself, didn’t once mention trade.

There’s probably a reason for that. In the Senate, Biden voted for the North American Free Trade Agreement and permanent normal trade relations with China. As then-President Barack Obama’s No. 2, he also supported the Trans-Pacific Partnership.

President Donald Trump’s team, rival Democratic campaigns, and progressive activists believe that record is a major vulnerability — particularly with a protectionist in the White House — and they plan on making sure voters know about it.

“Biden’s advocacy for NAFTA and the TPP would suggest that the Washington-driven conventional wisdom that he has solid support among union households in the Midwest and elsewhere might be more complicated than the media is currently presenting," says Waleed Shahid, communications director for the left-wing Justice Democrats. "Biden hasn’t been held accountable for his policy record and he’ll increasingly be exposed for not really being the populist hero he likes to present himself as.”

Many old-school Democratic voters believe free trade deals have been disastrous, closing down factories and shrinking American wages. Trump turned that opposition to his advantage, winning over some Democrats by bashing NAFTA and TPP.

As the politics of trade have been upended, Biden has a history of often voting like a Bill Clinton-, ’90s-style Democrat on the high-profile trade agreements, though he has also opposed other deals. And as vice president, Biden backed the Obama administration’s pro-free trade agenda.

Bernie Sanders is already jabbing Biden on trade. Hours after Biden delivered his first official campaign speech, Sanders went on CNN and contrasted their positions on the issue.

Sanders, polling second behind Biden in most national and early-state polls, didn’t stop there: He released a video on the topic, and issued a press release calling on Trump and other Democratic candidates to support his trade agenda.

It’s no surprise that Biden has ignored the provocations given his early frontrunner status. Questioned about Sanders’ broadsides during a trip to Iowa, Biden said, “We got plenty of time to respond. I’m not going to get in a debate with my colleagues here.” When he was asked whether he’s a “free trader,” Biden replied, “I’m a fair trader. That’s why I’ve been arguing for a long time that we should treat other countries the way in which they treat us which is, particularly as it relates to China: If they want to trade here they’re going to be under the same rules.”

Biden’s allies, meanwhile, have pushed back on the notion that he’s insufficiently pro-worker. Harold Schaitberger, president of the International Association of Firefighters, said Biden “has a clear, 40-year track record of supporting workers, working families, union families every step of the way, from prevailing wage to living wage to protection of their retirement plan.” He added that he expects a “majority of the labor movement” will eventually back Biden.

Republicans have also spotted an opening in Biden’s record. America Rising, a GOP opposition research firm, posted a video on YouTube titled “Joe Biden Nostalgic About His Work On Controversial Trans-Pacific Partnership.” The clip captures Biden lamenting at the University of Pennsylvania this year that the “extreme left and extreme right” has moved away from globalization, and said Chinese President Xi Jinping asked him, “If you get [TPP] done, can we join?”

Bryan Lanza, an aide on Trump’s 2016 campaign, said voters “feel trade left them behind” in key states such as Pennsylvania, Ohio and Wisconsin. He likened Biden’s past positions on trade and other issues to Hillary Clinton’s financial support from Wall Street, which her opponents seized on to portray her as beholden to the financial elite.

“It used to be that Republicans were the Wall Street candidates. With Hillary, she had these strong Wall Street relationships, and President Trump sort of flipped that dynamic, where he was embraced more by blue-collar workers,” Lanza said. “Biden is no different. Delaware is a corporation haven, and Biden has been carrying the weight for those people his entire career.”

Biden’s supporters say his connection with working-class white voters in the Midwest makes him the best Democratic candidate to take on Trump. But progressive activists are wasting no time trying to poke holes in that argument — starting with trade.

“There are many reasons Joe Biden is the least electable Democrat our side could possibly nominate,” said Adam Green, the co-founder of Progressive Change Campaign Committee, which supports Elizabeth Warren. “Being seen as cozy with big corporations and loving to cut backroom deals with political insiders are two of those reasons — and they are exactly what trade deals like the TPP represent. That’s the opposite of the outsider zeitgeist Trump tapped into in 2016 and will try to repeat in 2020.”

Biden isn’t apologizing for his pro-trade past, at least so far. Asked in Iowa if it was a mistake to support NAFTA, he said, “No, it wasn’t.”

In a brief writeup on his website, Biden’s campaign seems to strike more of a balance on the issue, saying that trade agreements must protect workers and the environment, but that “other countries will write the rules for us” if the United States does not. Biden’s team is expected to release more details on his policies in the coming weeks.

Trade could be a major fissure among primary candidates in 2020. Along with Warren, who fought against the TPP, Sens. Cory Booker and Amy Klobuchar have often opposed free trade agreements, while former U.S. Rep. Beto O’Rourke and Housing and Urban Development Secretary Julian Castro are viewed as more trade-friendly.

It’s unclear how much of a factor the issue will be in the Midwest. Polls in 2016 showed that Trump’s anti-trade stance was almost a certainly a boon to him in states like Pennsylvania, Wisconsin and Michigan. In August and September of that year, 53 percent of adults in the Midwest said free trade deals harmed their communities, more than people in any other region, according to a survey by POLITICO and the Harvard T.H. Chan School of Public Health.

But in 2018, Trump’s job rating fell below 40 percent in Michigan, Wisconsin and Minnesota — states where companies and workers were directly affected by Trump’s tariffs.

“I think the independent senator from Vermont sees this as an opportunity to chip away at Biden’s favorability,” said Antjuan Seawright, a South Carolina-based Democratic strategist who advised Clinton’s 2016 campaign in the state, adding, "Part of this is because Biden is a frontrunner, and Bernie is the No.1 contender.”