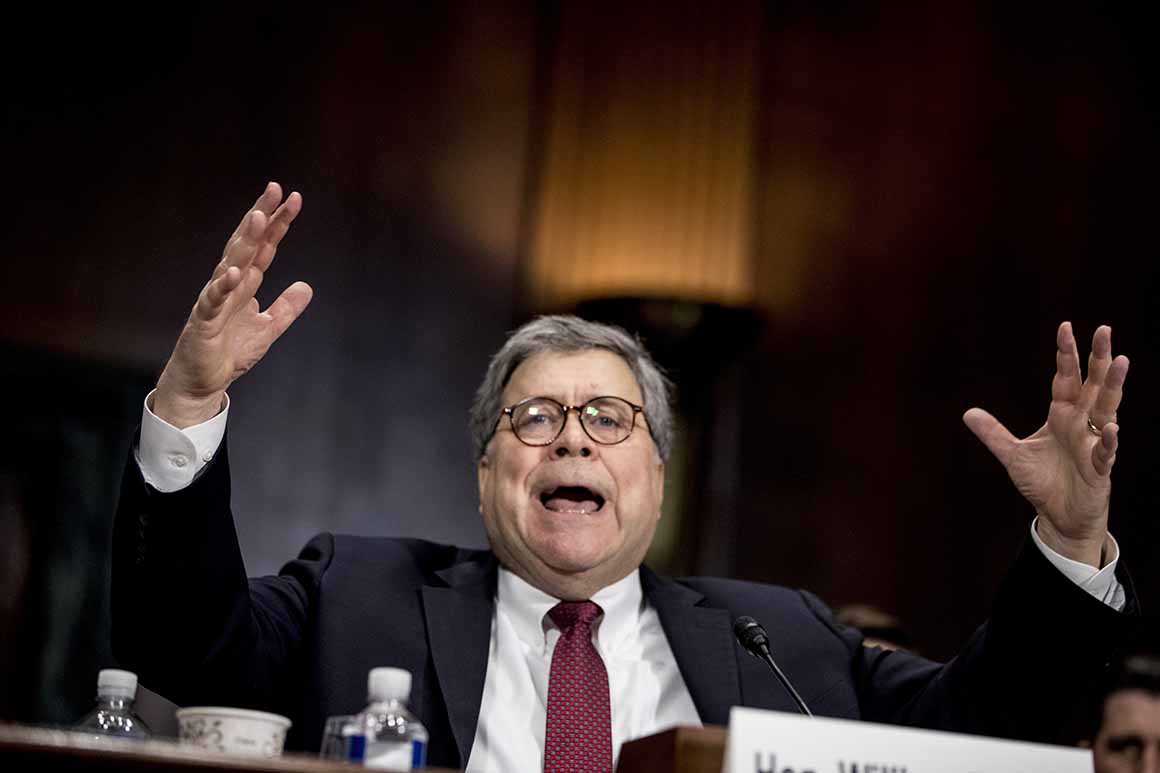 Democrats repeatedly admonished Attorney General William Barr at a contentious Senate hearing Wednesday, accusing him of bias and lying, and even calling for his resignation.

Barr’s response to many of those salvos? Throw others under the bus.

The pass-the-buck approach spared few over four-plus hours of questioning about Barr’s handling of special counsel Robert Mueller’s Russia investigation. A POLITICO tally of the transcript counted more than 30 times where the attorney general redirected the criticism, with a number of figures ending up as collateral casualties.

Here’s a breakdown of who took the brunt of Barr’s blame:

Barr and Mueller have been friends for more than three decades, but that relationship mattered little from the very start of the Senate Judiciary Committee hearing.

In his opening statement, the attorney general shredded Mueller over the sheer volume of material the special counsel turned in last month at the conclusion of his investigation, creating a predicament that Barr said forced him to buy time with his controversial release of top-line findings while the Justice Department and special counsel lawyers reviewed all the potential redactions.

“The body politic,” Barr explained, “was in a high state of agitation.”

Barr also faulted Mueller for handing in executive summaries that weren’t ready for prime time because they still contained sensitive material dealing with intelligence issues. “I made it clear to him I was not in the business of putting out periodic summaries because a summary would start a whole public debate” about its accuracy, Barr said.

The attorney general second-guessed several other Mueller decisions, explaining that he was, “frankly, surprised” with the special counsel’s punt on the pivotal question of whether President Donald Trump should be charged for obstruction of justice. He also scoffed at Mueller’s declaration that the president was not cleared of charges.

“We’re not in the business of exoneration,” the attorney general said.

There was more, too. Barr questioned why Mueller dug into “additional episodes” of Trump’s possible obstruction given the special counsel’s lack of prosecutorial firepower when it comes to the president.

“I think that if he felt that he shouldn’t go down the path of making a traditional prosecutive decision, he shouldn’t have investigated it,” Barr said. “That was the time to pull up.”

Barr didn’t criticize just Mueller. He also pilloried the special counsel’s prosecutors — aka the “Angry Democrats” who have frequently been on the receiving end of Trump’s wrath.

Addressing Mueller’s complaint that the attorney general in his initial March 24 letter to Congress “did not fully capture the context, nature, and substance” of the special counsel’s work, Barr told senators he thought Mueller’s missive was “a bit snitty and I think it was probably written by one of his staff people.”

The attorney general also threw shade at Team Mueller during an exchange with Sen. Marsha Blackburn (R-Tenn.) in which he was asked to assess a squad that included Justice Department veterans who prosecuted President Richard Nixon, the mafia, Islamic State terrorists and Enron executives. “Do you consider these lawyers to be the best and the brightest in the field?” Blackburn asked. “Not necessarily,” the attorney general replied.

In a follow-up, Blackburn asked, “Are they the warriors you would want on your side?” Again, Barr demurred: “I mean, I — there are a lot of great lawyers in the Department of Justice. He assembled a very competent team.”

Since stepping into his new job in February, Barr has repeatedly hugged close the departing deputy attorney general, Rod Rosenstein — particularly when dealing with the tricky wrap-up of Mueller’s investigation.

Each step of the way, Barr has stressed that the decisions he’s made regarding the Trump-Russia investigation were made jointly with Rosenstein or, at least, endorsed by him. The attorney general’s first letter to Congress announcing the end of the Mueller report, for example, declared that Rosenstein never rejected any significant step the special counsel wanted to take.

“I haven’t been the only decision-maker here. … He has 30 years experience,” Barr emphasized Wednesday.

In all, Barr mentioned Rosenstein more than a dozen times during the Senate hearing, underscoring how the two were in full agreement.

But at least some of the attorney general’s complaints about how Mueller carried out his task also seemed to amount to criticism of Rosenstein, with the attorney general stressing on numerous occasions just how closely the Justice Department’s No. 2 was overseeing the special counsel’s work during the past two years.

Despite Rosenstein’s supervision — “I know what he’s doing,” the deputy attorney general said of the special counsel in a House hearing in December 2017 — Barr suggested that Mueller essentially went rogue by refusing to make a decision about whether Trump obstructed justice.

“We don’t conduct criminal investigations to collect information and put it out to the public,” the attorney general said.

While Barr said he and Rosenstein were surprised by Mueller’s decision not to reach a conclusion on potential obstruction of justice by the president, the attorney general never explained how Rosenstein could have been keeping close tabs on the inquiry and still be blindsided by the special counsel’s decision to “pull up” without resolving such a critical question.

The FBI, the intelligence community and the Steele dossier

Barr went after the FBI, starting at the very top, acknowledging that he’d had a problem with how then-Director James Comey handled the conclusion of the Hillary Clinton email investigation. “ I said so at the time,” the attorney general said.

Unidentified FBI officials also took it on the chin from Barr for failing to warn the Trump campaign about suspicions of Russian efforts to infiltrate its inner circle.

“Under these circumstances, one of the things that I can’t fathom is why it didn’t happen,” Barr said. “If you’re concerned about interference in the election and have substantial people involved in the campaign — you had three former U.S. attorneys there in the campaign — I don’t understand why the bureau would not have gone and given a defensive briefing,” Barr said.

However, after a lunch break while senators voted on the floor, Barr revised his comments a bit to note that soon after Trump secured the Republican nomination in the summer of 2016, his campaign received an FBI briefing about generic counterintelligence threats. But Barr said Trump’s camp should have been warned about the specific concerns regarding Russia’s outreach to people connected to his presidential bid.

But having gotten in hot water a few weeks ago for his assertion that “spying did occur” on Trump’s campaign by the FBI, Barr was careful to make clear on Wednesday that he was not tarring the entire law enforcement agency.

Instead, Barr blamed “a few people at the top getting it into their heads that they know better than the American people,” and said FBI Director Chris Wray had “changed out” previous leaders who needed to go. “I don’t think … there is a bad culture in the FBI,” the attorney general said.

While Barr said he didn’t want to reach any conclusions on the FBI’s handling of the 2016 election investigation, under questioning from Sen. Josh Hawley (R-Mo.), the attorney general also seemed to endorse the idea that the FBI hid from the Justice Department the fact that it put Trump under investigation as a potential Russian asset or dupe.

“Would it be unusual to your knowledge to hide existence and results from their superiors?” Hawley asked

“Very unusual,” Barr said, agreeing with the freshman Republican that concealing such an investigation would lead to “no accountability” for the FBI’s actions.

Barr also said he harbored significant doubts about the accuracy of the so-called Steele dossier, the Democratic-funded private-investigation file that was part of what the FBI used to get surveillance warrants against Carter Page, a former Trump campaign adviser.

Sen. John Cornyn (R-Texas) asked Barr whether he had confidence that the document was not Russian propaganda.

“No, I can’t state that,” Barr said. “That is one of the areas that I am reviewing. I’m concerned about it. And I don’t think it’s entirely speculative.”

Barr was quick to pick up on Cornyn’s suggestion that the Obama administration allowed Russia’s malicious activities to flourish in the 2016 campaign by failing to act against Moscow.

“We need to ask the question: Why didn’t the Obama administration do more as early as 2014 in investigating Russian efforts to prepare to undermine and sow dissension in the 2016 U.S. election?” the Texas Republican said.

Barr used the opportunity to offer some praise for Mueller for the criminal indictments he brought against Russian military intelligence and the alleged online troll farm known as the Internet Research Agency.

“It is very impressive work that they did,” the attorney general said of the special counsel’s crew. “I was thinking to myself, if that had been done in the beginning of 2016, we would have been a lot further along.”

The attorney general even fingered his own Justice Department for some of the decisions he’s come under fire for making.

Barr said he “assume[d]” the Justice Department released to The Washington Post a copy of Mueller’s letter asking that the attorney general speed up the public release of his report’s summaries and introductions.

He also singled out the department’s criminal division for asking him to obtain a waiver allowing him to participate in an investigation into a Malaysian development company being scrutinized for money laundering and an allegedly illegal $100,000 donation it made to a Trump-aligned political action committee.

“I didn’t seek it,” the attorney general said of the waiver, which allowed him to participate in a case that involves a senior partner from his former law firm representing Goldman Sachs in the investigation.

The New York Times, the media, the internet and the impatient public

Barr also took some swings at modern technology and the press, as well as the pressures created by the public fascination with Mueller’s investigation.

The attorney general said the world wide web had magnified the threat posed by Russians looking to make mischief in the U.S. political system. “I think the internet creates a lot more opportunities to have that kind of covert effect on the American body politic, so, it’s getting more and more dangerous,” Barr said.

The attorney general also suggested that it was urgent for him to release the bottom-line findings of Mueller’s report without further details because Americans were too spun up about the investigation and simply could not wait.

To wait even briefly to release the executive summaries Mueller wanted to put out would have been like holding back the floodwaters.

“When the report came in on [March] 22nd and we saw it would take a great deal of time to get it out to the public, I made the determination that we had to put out some information about the bottom line,” Barr said. “There was massive interest in learning what the bottom-line results of Bob Mueller’s investigation was, particularly as to collusion.”

Another Barr target Wednesday was The New York Times. Answering a question about Trump’s alleged attempt to get White House counsel Don McGahn to fire Mueller, Barr argued that The Times got it wrong. He said that while McGahn and Trump disagreed about what Trump had asked for, there was no indication that he explicitly told McGahn to have Mueller fired.

While the Times article did say flatly that Trump had ordered Mueller’s firing, it also described the various conflicts that Trump was alleging should disqualify Mueller.