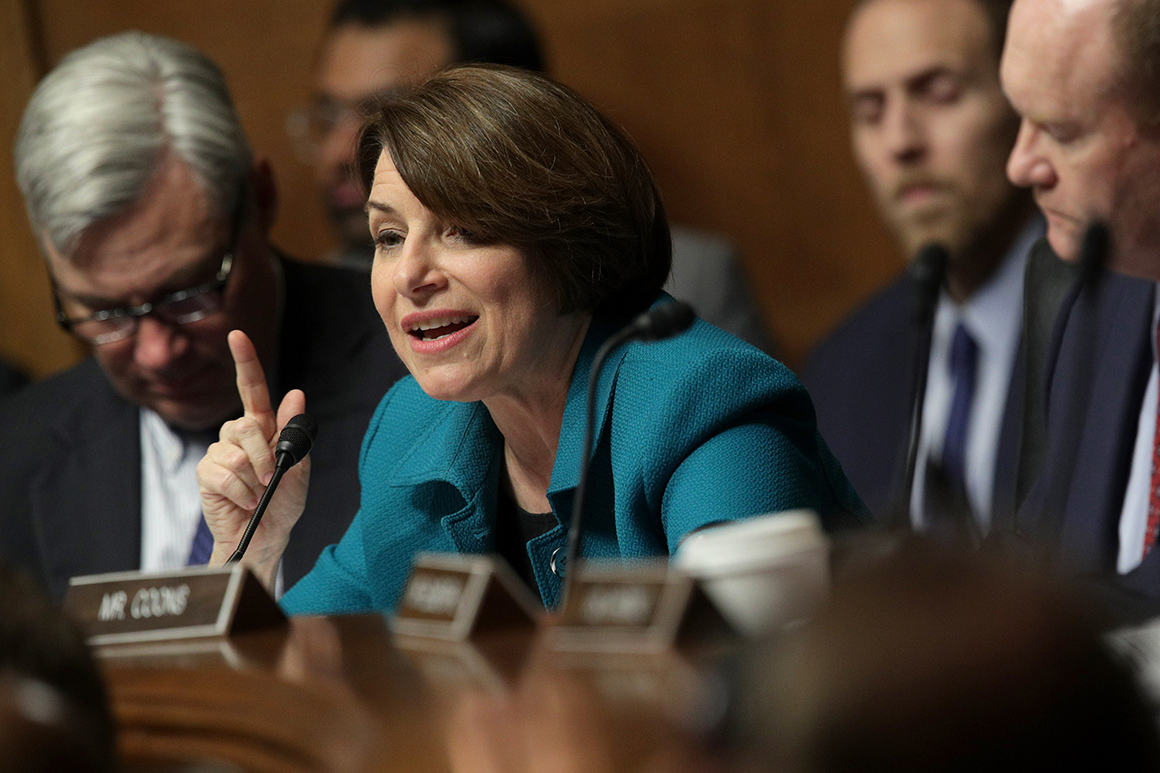 Senate Democrats and Republicans can agree on perhaps just one thing about special counsel Robert Mueller’s investigation — that Russia interfered in the 2016 election.

But bipartisan legislation to address foreign intrusions is all but dead amid a distinct lack of enthusiasm from Senate GOP leadership and the Trump White House.

And in an interview, Klobuchar put the blame for the impasse squarely on President Donald Trump’s former White House Counsel Don McGahn as well as Senate Majority Leader Mitch McConnell.

“It was Don McGahn,” Klobuchar said Wednesday. “He called Republicans about the bill, didn’t want them to do it. And McConnell also didn’t want the bill to move forward. So it was a double-edged thing.”

Klobuchar added that McGahn, who was previously chair of the Federal Election Commission “had a personal interest in it” and that with him no longer at the White House, “maybe they can look at it fresh.”

McGahn did not respond to a request for comment.

Klobuchar and Lankford’s bill would establish an Election Assistance Commission grant program and would codify existing Department of Homeland Security election security roles. It would also emphasize threat information sharing with election officials and require back up paper ballots and audits.

When asked about Klobuchar’s charges, Senate Rules Committee Chairman Roy Blunt replied, “I think that’s true” and added that neither her bill with Lankford nor other election security legislation is likely to pass in the sharply divided Congress.

The Missouri Republican said that the federal government was of greater assistance in protecting elections during the 2018 midterms. He also blamed the House Democrats election reform bill, HR 1, for contributing to the conflict.

“I think Sen. McConnell thinks this is a bad direction for us to head in… that won’t lead to any positive conclusions, so he is not going to put that bill on the floor,” Blunt said. “I think that’s even been further complicated by the excessive direction that the House has taken with their election legislation.”

The White House did not respond to a request for comment.

The Rules Committee planned to advance the legislation last August but postponed it after criticism from the White House and some state officials.

White House spokesperson Lindsay Walters said at the time that if Congress wished to continue pursuing the Secure Elections Act, it should not “violate the principles of federalism.”

“We cannot support legislation with inappropriate mandates or that moves power or funding from the states to Washington for the planning and operation of elections,” she said.

Lankford said Wednesday that he and Klobuchar are working to update their proposal in an attempt to move forward.

When asked whether the White House had lobbied against the bill, Lankford said that the White House’s legislative shop was “very clear” with him that they were not opposing the bill. He said the White House wanted “to make sure the final product does not have any issues where it’s trying to federalize elections in the states.”

The latest push comes as Senate Minority Leader Chuck Schumer and other lawmakers call for action on election security measures after Mueller laid bare the Russian meddling in 2016.

Both Senate Intelligence Committee Chairman Richard Burr (R-N.C.) and Mark Warner (D-Va.) support the Klobuchar-Lankford legislation, though Burr said the bill should have nothing to do with the Mueller report and is just “the right thing to do for election security.”

“I think we’re still vulnerable,” Warner said. “You had the FBI director as recently as last Friday say that this is an ongoing threat. I hope that the bipartisan supporters who supported it last Congress will support it again this Congress.”

Among those previous supporters is Senate Judiciary Chairman Lindsey Graham (R-S.C.). Graham said earlier this week that he wasn’t sure he’d back Lankford and Klobuchar’s bill this Congress but that something is needed to be done to address Russian interference.

At the Senate Judiciary Committee hearing Wednesday with Barr, Graham reiterated that he wanted to work across the aisle on election security legislation.

“I would like to do more to harden our infrastructure because the Russians did it,” Graham said. “It wasn’t some 400-pound guy sitting on a bed somewhere. It was the Russians. And they’re still doing [it]… My take away from this report is that we’ve got a lot of work to do to defend democracy against the Russians and other bad actors, and I promise the committee we will get on with that work.”

When Graham asked Barr whether he’d support such an effort, Barr replied: “Absolutely.”

Burgess Everett and Darren Samuelsohn contributed to this report.