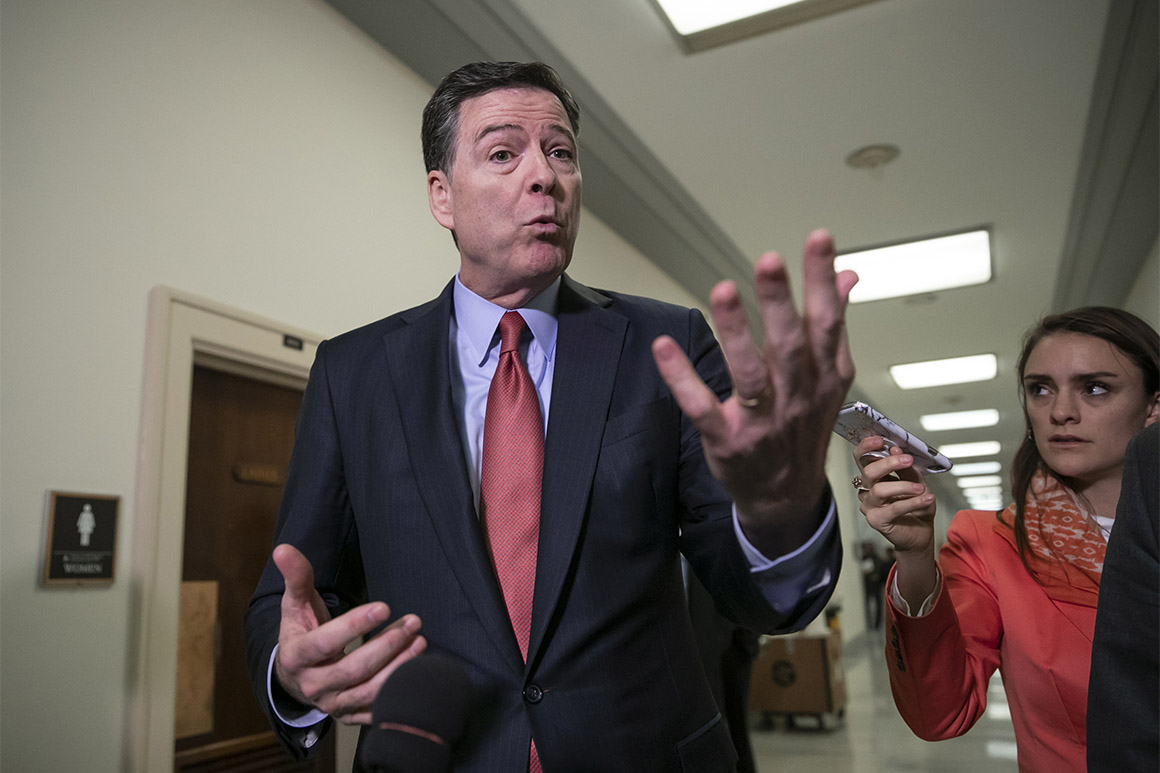 Comey, whom Trump fired nearly two years ago, described a process by which he think the president pulls his advisers and associates into “a web of alternate reality,” where they are forced to — at least publicly — appear to support Trump’s every move.

He contrasted Barr and Rosenstein to former Defense Secretary James Mattis, who he lauded for resigning “over principle.” Mattis stepped down from his cabinet role in December, citing his differences with the president on a number of issues.

“Accomplished people lacking inner strength can’t resist the compromises necessary to survive Mr. Trump and that adds up to something they will never recover from,” Comey wrote. “It takes character like Mr. Mattis’s to avoid the damage, because Mr. Trump eats your soul in small bites.”

The former FBI director’s op-ed comes a day after it was revealed that special counsel Robert Mueller wrote a letter to Barr expressing frustration over how the attorney general presented the findings of his 22-month investigation in a four-page memo to Congress.

Mueller’s probe was launched in the wake of Comey’s dismissal, when Rosenstein appointed the special counsel to investigate Russian interference in the 2016 election. Comey’s firing later became part of the probe into whether the president obstructed justice by attempting to interfere with the special counsel investigation.

Barr and Rosenstein received backlash for the letter sent to Congress on March 24 — almost a month before a redacted version of Mueller’s full report became available to the public — for saying the Justice Department would not pursue charges against the president, despite the special counsel’s inconclusive findings on whether the president obstructed justice.

Now, Barr is also being criticized for denying he was aware of frustrations from the special counsel’s team about his portrayal of their findings during a congressional hearing in April, despite the fact that he’d been in contact with Mueller about the matter.

Comey also implied Barr’s use of words like “no collusion” and “spying” during congressional hearings was an attempt to protect the president.

It’s a process that he saw first hand, the former FBI director wrote in the op-ed. The president’s speaking style — layered with “bold assertations, and “he rarely stops talking” — is what Comey says pulls those serving Trump “into a silent circle of assent.”

“Speaking rapid-fire with no spot for others to jump into the conversation, Mr. Trump makes everyone a co-conspirator to his preferred set of facts, or delusions,” he wrote. “I have felt it — this president building with his words a web of alternative reality and busily wrapping it around all of us in the room.”

This phenomenon escalates to the point that Trump attacks “institutions and values you hold close,” Comey wrote. Still, those serving the president do not speak out, Comey says, because they feel a sense of duty to protect the American people through their service.

“Of course,” Comey writes, “to stay, you must be seen as on his team, so you make further compromises. You use his language, praise his leadership, tout his commitment to values.”