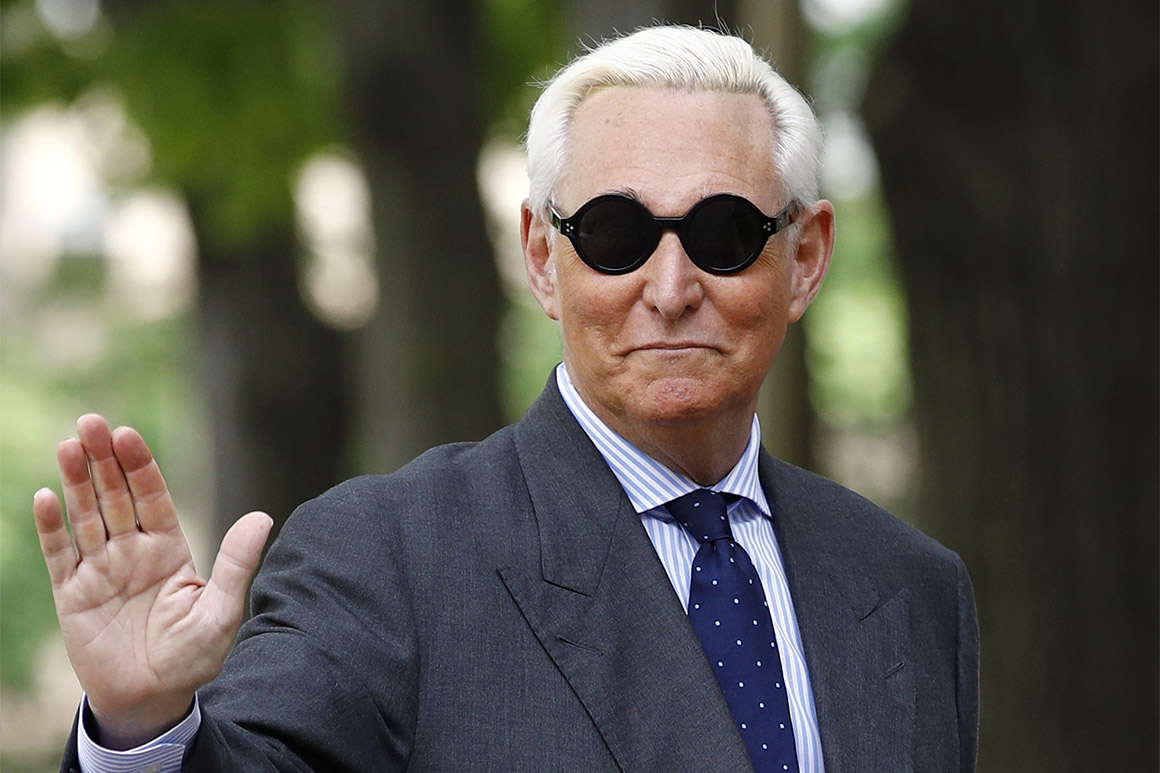 Prosecutors are already subpoenaing witnesses to testify against Roger Stone, the Trump associate whose trial for allegedly lying to Congress and obstructing lawmakers’ Russia probes won’t begin for another six-and-a-half months.

Randy Credico, a colorful New York radio host and Stone acquaintance, was recently subpoenaed by the Washington, D.C., U.S. Attorney’s office on April 18 to testify in Stone’s case. The subpoena, obtained by POLITICO, orders Credico to appear in court on Nov. 5, the day the trial opens.

Credico’s lawyer Martin Stolar told POLITICO that “there is no reason to expect that we will not comply” with the subpoena, which is signed by the lead prosecutor on the Stone case, Michael Marando.

The subpoena is the first sign that the government considers Credico, who Mueller’s team interviewed several times in 2018 and who testified before the grand jury, to be a credible and potentially damaging witness against Stone. It also offers a glimpse into the prosecution’s strategy — Credico is expected to shed light not only on Stone’s efforts to connect with WikiLeaks during the 2016 election as he sought Hillary Clinton’s emails, but also on Stone’s alleged attempts to intimidate Credico into parroting his version of events.

Eager for any and all information that could affect the witnesses’ credibility, Stone’s lawyers have asked U.S. District Court Judge Amy Berman Jackson, who is overseeing Stone’s case, to order the government to hand over an unredacted version of special counsel Robert Mueller’s full report on his nearly two-year-long investigation of Russian election interference. Sections of the report dealing with ongoing investigations, including Stone’s, are blacked out of the 448-page document.

In a status hearing on Tuesday, Jackson didn’t make a decision on Stone’s request, but told his lawyers that their written arguments, due Friday, “really need to home in” on why the defense needs information it has presumably already obtained via the discovery process — including FBI 302’s, or interview summaries, and grand jury material. Stone’s lawyers have also been given roughly nine terabytes of data that the government obtained and gave the defense during discovery.

“We can pile it as high as the Washington Monument twice,” Robert Buschel, an attorney for the defendant, said in court last month.

Stone’s lawyers, meanwhile, hope to put Assange on the stand, POLITICO reported previously. Assange was arrested in London earlier this month and his lawyers are fighting his extradition to the U.S.

Mueller indicted Stone in January, and his case was later handed off to D.C. prosecutors when the special counsel closed up shop in March. Investigators had been examining Stone to determine whether the longtime GOP operative coordinated with WikiLeaks founder Julian Assange during the election. Stone made several uncanny predictions throughout 2016 about WikiLeaks that lead some to believe he may have inside knowledge of the activist group’s plan.

Stone told lawmakers in September 2017 that he had no direct line to Assange and that Credico, a liberal activist and regular stunt political candidate, was his backchannel.

Credico has long denied that story, though. And when he told Stone in early 2018 that he wouldn’t go along with Stone’s story, Stone allegedly threatened to take away Credico’s therapy dog, which has traveled with Credico to previous court appearances. Stone also told Credico to “prepare to die,” according to prosecutors.

Because of his interactions with Stone in 2016, Credico appeared before Mueller’s grand jury and sat for several interviews with the special counsel’s team. During the election, Credico claimed that Assange had “kryptonite on Hillary” and also predicted damaging email dumps about Clinton in October 2016.

But no evidence emerged that he had actually served as a backchannel between Stone and WikiLeaks. In their indictment, prosecutors instead homed in on the right-wing author Jerome Corsi, who told Stone in July 2016 — prior to Stone’s outreach to Credico — that “word is friend in Embassy plans 2 more dumps. One shortly after I’m back. 2nd in Oct. Impact planned to be very damaging.”

With regard to Credico’s appearance in court in November, his lawyer said he “will tell the truth” and that his testimony “will be what it always has been — that he was not Stone’s backchannel to Assange.”