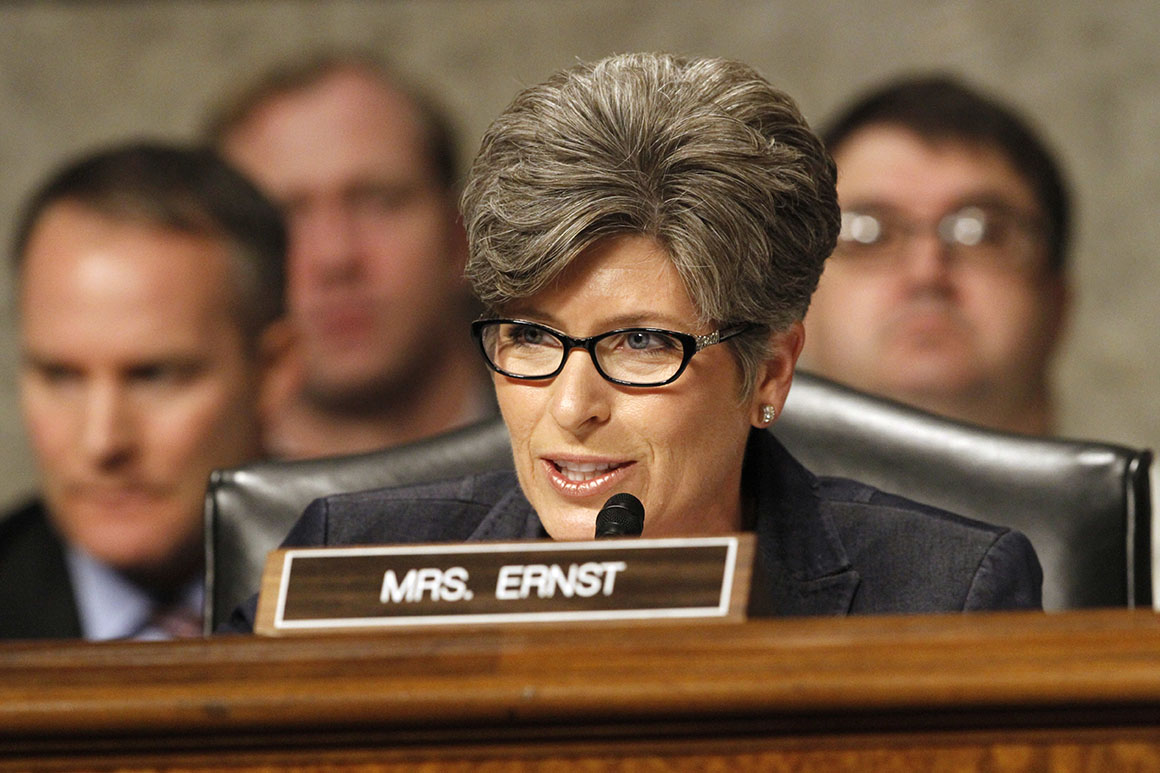 The tide in the Senate is showing signs of turning against Stephen Moore, President Donald Trump’s pick for a seat on the Federal Reserve, with one member of Republican leadership voicing strong concern over his disparaging comments about women.

“His past writings are ridiculous,” Sen. Joni Ernst (R-Iowa) told reporters Monday evening. “I’m not enthused about supporting him, let’s put it that way.”

Pressed for her specific objections, Ernst added: “Look at his writings … I’m a woman.”

Moore, who has not yet officially been nominated, in a 2002 column decried the fact that the NCAA had allowed female referees. “Is there no area in life where men can take vacation from women?” he wrote.

He said woman should participate in sporting events “if and only if, they look like [sports journalist] Bonnie Bernstein,” adding that Bernstein should wear halter tops.

He also wrote in 2014 that women earning more than men could be “disruptive to family stability.” On Sunday, he apologized for some of the things he has written about women but wasn’t specific.

Trump’s selection of Moore had already sparked a backlash because he is an overt political ally of the president and has called for Fed Chairman Jerome Powell to be fired for supporting interest rate hikes last year.
But his demeaning comments about women have added yet another obstacle to his path to a potential confirmation.

While administration officials have said they still back Moore for the Fed, White House press secretary Sarah Sanders said on Monday morning that they were reviewing his past comments.

Sen. Richard Shelby (R-Ala.) said he thought Moore would be an interesting pick for the Fed but added that he too has qualms about what he has said about women.

“I think everybody does,” he told reporters. “My wife is a professor, you know? She broke through a lot of ceilings and everything,” adding that he has a granddaughter who “thinks she can do anything.”

“I know him, but a lot of these things have come up about his taxes, about his child support and alimony, about things he’s written about women,” he said. He said those things would all be considered if he’s nominated. Shelby is a senior member of the Banking Committee, which would have jurisdiction over Moore’s nomination.

Sen. Martha McSally (R-Ariz.), the lone female Republican on the committee, offered no indication as to her opinion.

“We will have a thoughtful process like every confirmation,” said McSally, a veteran of the U.S. Air Force.

Notably, Moore also criticized the concept of women in combat in his column about a woman refereeing a men’s game. “What’s next? Women invited to bachelor parties? Women in combat? (Oh yeah, they’ve done that already.)”

Sen. Lisa Murkowski (R-Alaska) said she has been focused on other things but would do her homework on Moore. Asked if she had reservations, she told reporters: “Just the reservations that you guys have come up with. I’ll have to figure out how much is there.”

On ABC’s “This Week,” Moore said he wished the focus would be on his economic ideas.

“These articles that you’re talking about were 17, 18 years ago,” he said. “Frankly, I didn’t even remember writing some of these they were so long ago.”

He also addressed another comment — that Cincinnati and Cleveland are the “armpits of America,” as he said in 2014 — saying he no longer thinks that.

“I am a Chicago boy,” he said Sunday. “Cincinnati and Cleveland have been our rivals. But, you know, the irony of that statement which was made five years ago is today the Ohio economy is booming. I just wrote a column saying, you know, look Cincinnati and Cleveland aren’t the armpits of America, they’ve become the economic arsenal, Ohio is booming. And unfortunately my home city of Chicago, my home state of Illinois is in the pits.”

“Ohio’s doing all the right things,” he said. “No, I do not believe Ohio is the armpit anymore.”