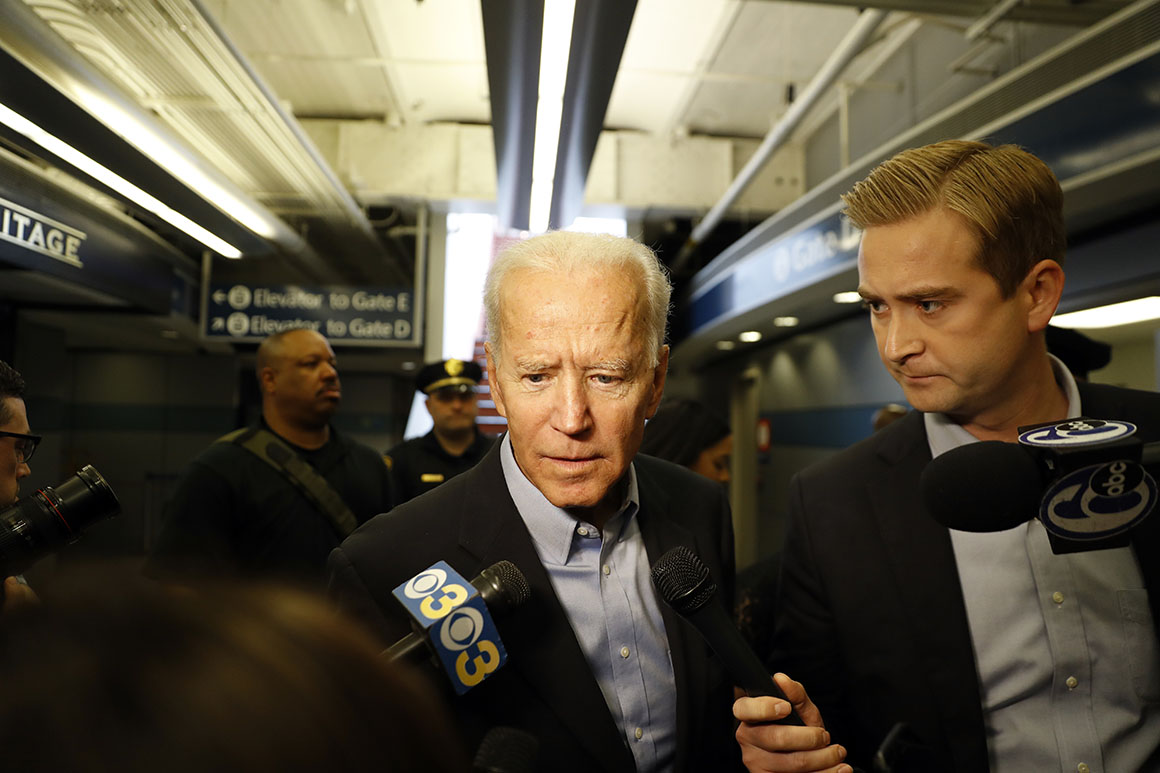 In another election, at another time, the late entrance of a well-funded candidate leading in the polls might send convulsions through the primary field.

But Joe Biden’s arrival into the 2020 race has not had that effect. No Democratic rival appears doomed. No one’s fundraising seems in danger of drying up. Instead, in joining the race, the former vice president has laid bare how unsettled the entire 20-candidate contest remains — and how many in the party don’t believe the 76-year-old Biden is prepared for the rigors of a modern campaign, or the demands of a party transformed.

“He’s been a corporate Democrat for years, and I think the Democratic Party is recognizing that our nominee and our party moving forward really has to be prepared to challenge the D.C. power structure,” said Democracy for America Chairman Charles Chamberlain, whose group has supported Warren and Sen. Bernie Sanders in the past.

For Biden, he said, “The wheels are going to come off the cart.”

Following a relatively placid start to the primary election, Biden’s entrance into the race has had one immediate consequence: the edges of the debate have been sharpened, opening a more confrontational phase of the campaign.

Within hours of Biden’s announcement, Sen. Elizabeth Warren (D-Mass.) was needling him for his past positions supportive of Wall Street, while she and other Democratic contenders chided his high-dollar fundraising in appeals to their own small donor bases.

But the overarching narrative continues to be the primary field’s lack of definition. Even with Biden in the race, several more prospects — among them, Sen. Michael Bennet (D-Colo.) and Gov. Steve Bullock (D-Mont.) — are still looking to get in. And while Biden begins from a commanding position in the polls, it’s unclear how much of that support will remain adhered to him. Rival campaigns expect it to erode.

TV crews still follow the hordes of candidates running under 10 percent in the polls, any number of whom have good reason to believe that with far lower name recognition than Biden and the other behemoth in the race, Sen. Bernie Sanders (I-Vt.), their own campaigns have time to grow.

The key milepost, nearly every campaign agrees, is the first official debate in June.

Predicting the Democratic field would not narrow to a “true top 5” until the fall, Wolf said, “In 2007-2008 it was really a choice between Obama, Edwards and Clinton. In 2016, it was a choice between Bernie and Hillary … Today, you could argue no one’s north of 25 percent, and you know, it doesn’t feel like that many people are picking one [candidate] versus the other.”

Biden’s rivals had been expecting his announcement for months. But his surprising ability to raise money — $6.3 million in one day — suggested a measure of enthusiasm supporting his persistent standing atop public opinion polls.

Randi Weingarten, president of the American Federation of Teachers, said that “if the polls mean anything, there is a great reservoir of goodwill for him.”

“I think Biden, by who he is and what he represents and what he has fought for his entire life, makes a very important contrast to Donald Trump,” Weingarten said. “And what his entry in the race gives Democrats is a real choice between someone new and someone who has been in the trenches in this fight, including in the White House, for decades.”

“I think [Biden] primarily he takes from the white men, so I think that the candidates of color in particular are going to be better able to withstand another white guy getting in the race,” said Colin Strother, a Texas Democratic strategist who once advised Julián Castro, the former San Antonio mayor running for president.

Yet if Biden’s announcement put Democrats on notice that Biden is “the biggest, baddest guy in this race,” Strother said, “I think the frost melts off this pumpkin pretty quickly here.”

Despite his impressive haul of initial donations, Biden must still demonstrate that he can maintain a high pace of fundraising while relying on a flood of traditional high-dollar fundraisers. He also must show he can run a modern campaign that appeals, or at least mollifies, the base of the Democratic Party.

The first days of Biden’s campaign brought signs of how difficult a task that may be. In a Friday appearance on “The View,” Biden again refused to directly apologize to Anita Hill for how he handled the 1991 Clarence Thomas Supreme Court hearings. 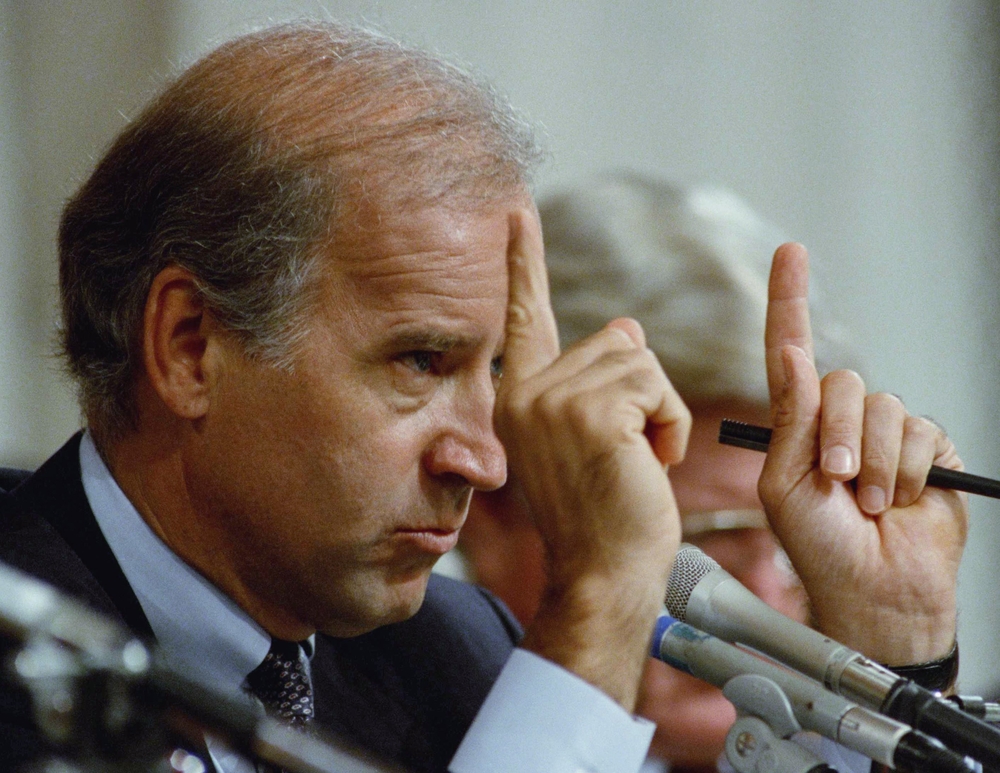 “I see the communications decision to say, ‘Let’s get everything out of the way early,’” said Rebecca Katz, a progressive consultant who advised Cynthia Nixon’s run from the left against New York Gov. Andrew Cuomo. “But there seems to be a disconnect between what the plan is and what he will actually say when he’s asked the question” about Hill.

Rep. Seth Moulton (D-Mass.), a longshot candidate for president, urged Biden on Sunday to apologize to Hill, while Sen. Amy Klobuchar (D-Minn.), said on NBC’s “Meet the Press,” “I’m sure he’s going to have to continue to address this issue as we go through the campaign.”

For months, most Democrats had been careful to avoid directly criticizing Biden, a beloved figure to a generation of Democrats. Sen. Kamala Harris (D-Calif.) went so far to say she adores Biden. "Come on in, the water is warm, Joe,” she said.

And even after his announcement, most were cautious to criticize him.

O’Rourke, who is scheduled to hold his first high-dollar fundraiser in New York City next month, has abstained from criticizing any of his Democratic rivals, often praising them effusively. Democrats, he has said, are not itching for negativity.

But it is unclear how long such comity can last. Biden’s entry into the race immediately resurfaced fissures between the party’s progressive and moderate factions, divisions that had quieted following billionaire former New York Mayor Mike Bloomberg exit from scene earlier this year. Biden is in many respects a symbol of Washington, allowing Democrats to hold him up as an establishment foil.

“They are all taking that as a sign that the field is more or less set, but we also have an establishment big fish in the pod, and they have to do more to start separating themselves from the pack,” said Mike McCauley, a South Carolina strategist and veteran of Barack Obama’s presidential campaign.

Warren — riding new momentum after an energetic CNN town hall and well-received appearance at a forum focused on women of color — jabbed at Biden for his support of Wall Street in bankruptcy disputes.

“I got in that fight because (families) just didn’t have anyone — and Joe Biden was on the side of the credit card companies,” Warren said in response to a question in Iowa on Thursday.

On Friday, after Biden announced his record 24-hour finance haul — besting the entire field despite starting with a thin small-dollar online operation — Warren lit into him in an email to supporters: “How did Joe Biden raise so much money in one day? Well, it helps that he hosted a swanky private fundraiser for wealthy donors at the home of the guy who runs Comcast’s lobbying shop.”

In a fundraising email of his own timed to Biden’s launch, Sanders’ also campaign took aim at Biden’s ties to deep-pocketed, corporate-world donors: “It’s a big day in the Democratic primary and we’re hoping to end it strong. Not with a fundraiser in the home of a corporate lobbyist, but with an overwhelming number of individual donations in response to today’s news. Contribute before midnight. It would mean A LOT to our campaign.”

Nancy Patton Mills, chairwoman of the Pennsylvania Democratic Party, cast the glancing blows by the progressive Democrats as unsurprising — and even healthy for a party in search of its strongest standard-bearer, someone who could forcefully compete with the smack-talking president.

“I do believe that we’re going to have a real, strong honest debate,” said Mills, adding she was pleased to see Biden join the ideologically diverse field of Democratic contenders.

“We’re not going to soft-peddle this,” she said. “There is going to be a debate on our major issues.”

Or as the DFA’s Chamberlain put it, “It’s going to be a brutal general election, and Democrats need to not be afraid of a brutal primary campaign.”

He said, “The only way we’re going to get that is if we take the gloves off and actually get in the ring.”