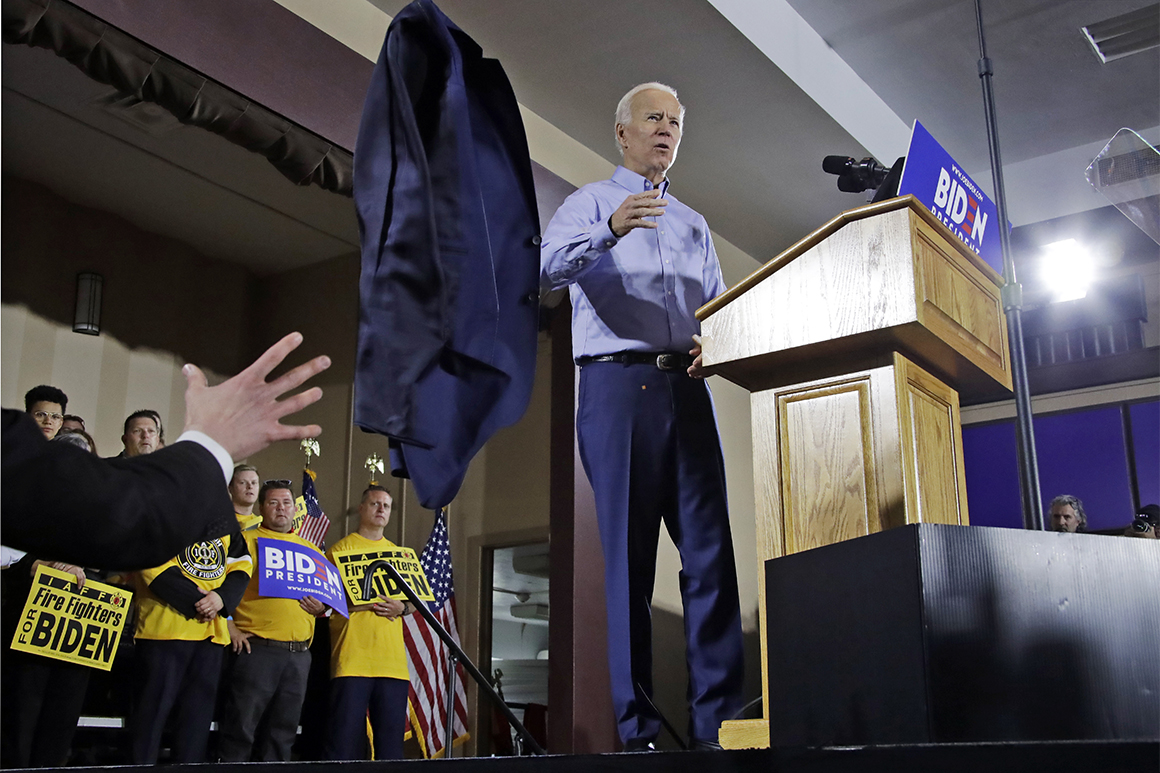 PITTSBURGH — With a Pittsburgh union hall as a backdrop, Joe Biden made his first official speech as a 2020 presidential candidate Monday.

From the event’s atmospherics to the substance of his remarks, the address was carefully calibrated to send a message: while his rivals are pursuing the Democratic nomination, the former vice president plans to run a general election campaign focused on Donald Trump.

“If I’m going to be able to beat Donald Trump in 2020, it’s going to happen here,” Biden told a packed crowd at the Teamsters Local 249 banquet hall here.

Biden stuck to an economic message tailored for Pittsburgh, where he praised organized labor and denigrated Wall Street CEOs and companies that used the Trump tax cuts to buy back stocks while laying off workers.

While other Democratic contenders criticize the president to varying degree, few have been so explicit in focusing their attention squarely on him. Biden announced his candidacy last week via an unorthodox video announcement that directly aimed at Trump’s response to violent demonstrations in Charlottesville in 2017. And his decision to headquarter his campaign in Philadelphia — and kick it off with a rally at the other end of the state in Pittsburgh — underscore his connection to Pennsylvania, a key industrial swing state Trump unexpectedly captured in 2016.

On Monday, Biden sought to remind those who filled the hall of his unique qualifications to wrest back working-class voters in states like Pennsylvania, Michigan and Wisconsin — two other Midwestern states Trump won in 2016 after decades in the Democratic fold in presidential elections.

“If you worry about Donald Trump being elected and he won Pennsylvania, Ohio, Michigan and Wisconsin, I don’t think it’s bad at all for Biden to announce his candidacy in Pennsylvania and say, ‘I can beat him here and in those places,’” said Joe Trippi, a veteran of multiple Democratic presidential campaigns.

“Electability is important,” he said. “And it’s probably more important than, say, our differences on healthcare. The Democrats all want to get to the same place on healthcare. But you have to win to do that.”

The strategic focus on the general election is to some degree a luxury granted by Biden’s status as a front-runner and former vice president. There’s no need to establish his name recognition or attempt to differentiate himself from the 19 other candidates — the party is already well-acquainted with him, for better and for worse.

And by positioning against Trump, Biden highlights one of his strengths as a candidate — the perception of electability that surrounds him. A Morning Consult/POLITICO poll earlier this month showed Biden with an 8 percentage point lead over Trump in the general election.

“Biden is not a nuanced policy guy and he’s not a ‘blow up the world and create a new system’ candidate. He’s an institutionalist. That’s his bread and butter,” said Aren Platt, a veteran Pennsylvania Democratic consultant. “A top concern for Democrats is they want someone who can win in November and Biden can make that case and I think that’s why, for the moment, he’s not so interested in bridging the gap between old and new Democrats.”

The general election positioning is already providing some dividends. Biden’s Charlottesville announcement video was panned by many Democrats, but it proved effective in provoking Trump to comment on the controversy and engage in an ongoing verbal tussle that only bolsters Biden’s case that he’s well-suited to take on the president.

Platt and others caution, however, that basing a primary campaign on November electability can be risky — falter in an early state after being the front-runner, and the electability argument starts to evaporate.

After his Pittsburgh event, Biden makes four stops in Iowa on Tuesday and Wednesday, travels to South Carolina over the weekend and then heads to Nevada and California before returning to Philadelphia.

Joel Benenson, a top advisor to Hillary Clinton’s 2016 presidential campaign and President Obama’s 2008 and 2012 campaigns, said it was clear why Biden went right after Trump in his announcement video — because no one else had.

But, Benenson noted, since Trump has been the first president in the history of the Gallup Poll to not reach 50 percent approval at this point in his term, Democrats might consider most of their candidates as good match-ups against the president.

“Running as the guy to beat Trump makes sense, but on the other hand, if [Trump is] that weakened, is that really the best argument to make in a field of more than a dozen largely, very talented people?” Benenson asked. “Elections are about big things, not small things. They’re about the future and not the past.”

Benenson said he loves Biden and the help he gave Obama in the White House and on the ticket in 2008 and 2012, but whether he has a clear appeal to white working-class or other voters in 2020 is yet to be determined.

Biden’s blue-collar bona fides aren’t all that he is relying on. As the other campaigns move more to the left, Biden insiders say it creates a space for him to win the forgotten, moderate voters who have a significant voice in Democratic primaries.

“The Democratic Party and the primary isn’t progressive Twitter,” said one Democrat helping Biden’s campaign. “What you see on social media is distorted.”

Howard Schaitberger, general president of the International Association of Fire Fighters, said his union decided to endorse Biden as soon as he got out of the starting gate because they believe he can win and that he reflects the sensibilities of their working-class membership.

“Joe Biden is the candidate in our view that has the voice and the connection with the workers in middle America that abandoned the Democratic candidate in 2016,” Schaitberger said. “I’m very concerned about a Democratic party lurching too far to the left. They might have high-minded ideals that sound good. But in our view, he’s someone who has the skill set to stay on that middle lane or middle road. He can win. That’s the real bottom line. Who can win?”