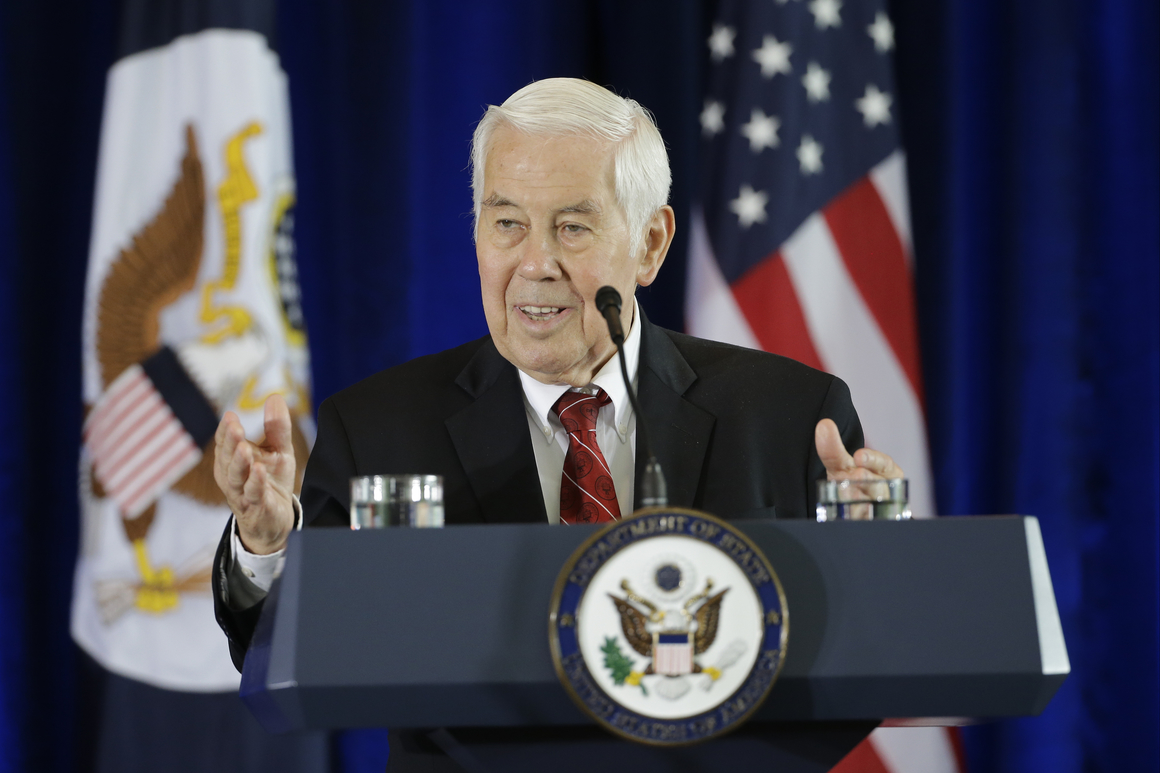 Richard Lugar, the longest-serving U.S. senator in the history of Indiana and an ardent foe of nuclear proliferation, has died. He was 87.

The Lugar Center reported he “died peacefully on Sunday April 28 at 1:44 am. at the Inova Fairfax Heart and Vascular Institute in Virginia. The cause of death was complications from CIDP.“

A six-term Republican, Lugar made his name with his work on agricultural issues and later, along with Georgia Sen. Sam Nunn, on the control of nuclear, chemical and biological weapons. He sought the presidency in 1996, but despite being what the New York Times called "among the most qualified candidates ever to run for President of the United States," his bid ended quickly and quietly.

"An internationally respected statesman," said President Barack Obama in awarding him the Presidential Medal of Freedom in 2013, "he is best-known for his bipartisan leadership and decades-long commitment to reducing the threats of nuclear weapons."

Dependably well-informed, Lugar spent eight years as mayor of Indianapolis, followed by 36 as a U.S. senator. After four straight elections in which he won reelection by margins of at least 2-to-1, his elected career came to an end in 2012 when he was defeated by tea party challenger Richard Mourdock in the primary.

"All who work in his chamber," fellow Indiana Sen. Dan Coats said in 2012, "can learn from his passion for public service, sincere desire to reach out across the aisle to find common ground, and unique talent for forging coalitions and bringing people together to accomplish big things."

After his loss to Mourdock, Indianapolis Monthly surveyed his career and listed some of his achievements "by the numbers," including 13,008 (votes cast in the Senate), $5.2 million (unspent office funds he returned to the Senate during his tenure) and, perhaps most notably, 7,5000 (nuclear warheads deactivated as a result of the efforts of the Nunn-Lugar Act).

"There is nobody who’s spent more energy in more worthy ways to try to make the world safer than Dick Lugar,” Secretary of State John Kerry said.

Richard Green Lugar was born in Indianapolis on April 4, 1932, to a farm family. His early years were filled with achievement: He was an Eagle Scout, first in his class in his high school, Phi Beta Kappa at Denison College in Ohio and a Rhodes Scholar, an honor he would share in 1954 with fellow future Sen. Paul Sarbanes.

Next for him was a stint in the Navy, working at one point as an intelligence briefer for Chief of Naval Operations Arleigh Burke. In 1956, he married Charlene Smeltzer.

After the Navy, he returned to the family business, then was elected to the Indianapolis School Board in 1964. Three years later, he was elected the city’s mayor and was responsible for Unigov, the consolidation of the city’s functions with that of neighboring communities in 1970.

In 1974, Lugar challenged Democratic Sen. Birch Bayh but was defeated. Two years later, he tried again and routed three-term Democrat Vance Hartke. It was a year of change, as nine incumbent senators were ousted. CQ Almanac noted Lugar had run against "the evils of federal bureaucracy" despite having "a relatively progressive reputation as mayor."

As a senator, he worked on a range of issues; in 1979, for instance he helped design the bailout of Chrysler. Through the years, though, he had two great interests, agriculture and foreign policy. He would come to chair Senate panels devoted to both.

Lugar was credited with helping to fashion landmark 1990 and 1996 farm bills, efforts to modernize a system that had not changed much since the New Deal, Agriculture was a business he knew well from his family, and he was eager to limit government controls. For years, he fought an uphill battle to reduce subsidies. "Direct payments this year were made to people who are dead, gone," he said in 2007. "Why? Because they were made the year before and the year before that." 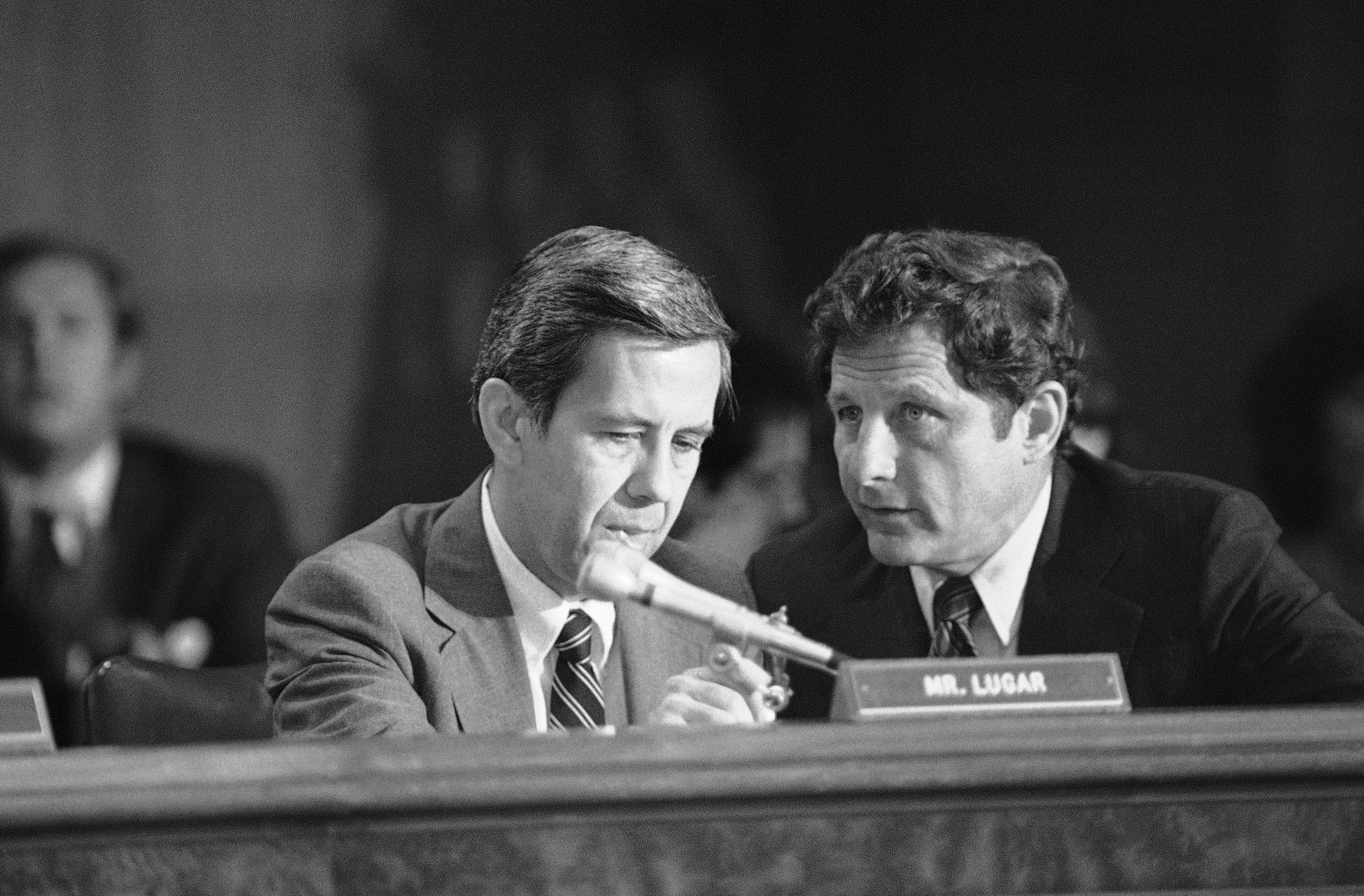 In terms of foreign policy, Lugar was heavily involved in Washington policy debates over conflicts throughout the world, from Nicaragua to Iraq to the Philippines. He developed a particular interest in preventing the spread of nuclear, chemical and biological weapons, fighting for arms control treaties and other international efforts.

With the end of the Cold War, he paired with Nunn, a centrist Democrat from Georgia, to create the Nunn-Lugar Cooperative Threat Reduction program. The program paid the former states of the Soviet Union to get rid of their nuclear weapons rather than risk having them fall into the hands of terrorists and rogue states. It also led to upgraded security at weapons sites and money to find alternate employment for Soviet nuclear scientists.

After 9/11, a similar program was designed for chemical and biological weapons. In 2012, a biological research facility in the former Soviet Georgia would be renamed the Richard G. Lugar Center for Public Health Research.

"Because of this record and deep interest in international affairs," John T. Shaw wrote in Atlantic Monthly, "Lugar has often served as Congress’s de facto foreign minister. He is usually one of the first American lawmakers diplomats wish to meet when they visit the United States."

Lugar was usually a dependable Republican vote, though he did chart his own course on some issues, such as gun control.

"Throughout his public life," The Almanac of American Politics observed in its 2012 edition, "Lugar’s strength has been following his stubborn convictions and letting his considerable intellect guide him, regardless of political risk or reward. Over his long career, he has plenty of accomplishments but also some disappointments."

One disappointment: His 1996 bid for the presidency. That went wrong from day one.

It wasn’t that there was anything inherently wrong with his announcement on April 19, 1995, in Indianapolis but the timing was dreadful — it was the same day as the Oklahoma City bombing that left 168 people dead. At a time of national shock and grief, Lugar’s newly launched candidacy was just about invisible.

Building a bid on "nuclear safety and fiscal sanity," he had some unique plans, such as replacing the income tax with a national sales tax. But Lugar couldn’t connect with voters nationally. "Despite his credentials, the brainy and statesemanlike Mr. Lugar remains virtually unknown outside his home state," the New York Times wrote in December 1995. "Polite, wordy and bland, he also remains far back in the Republican presidential pack." 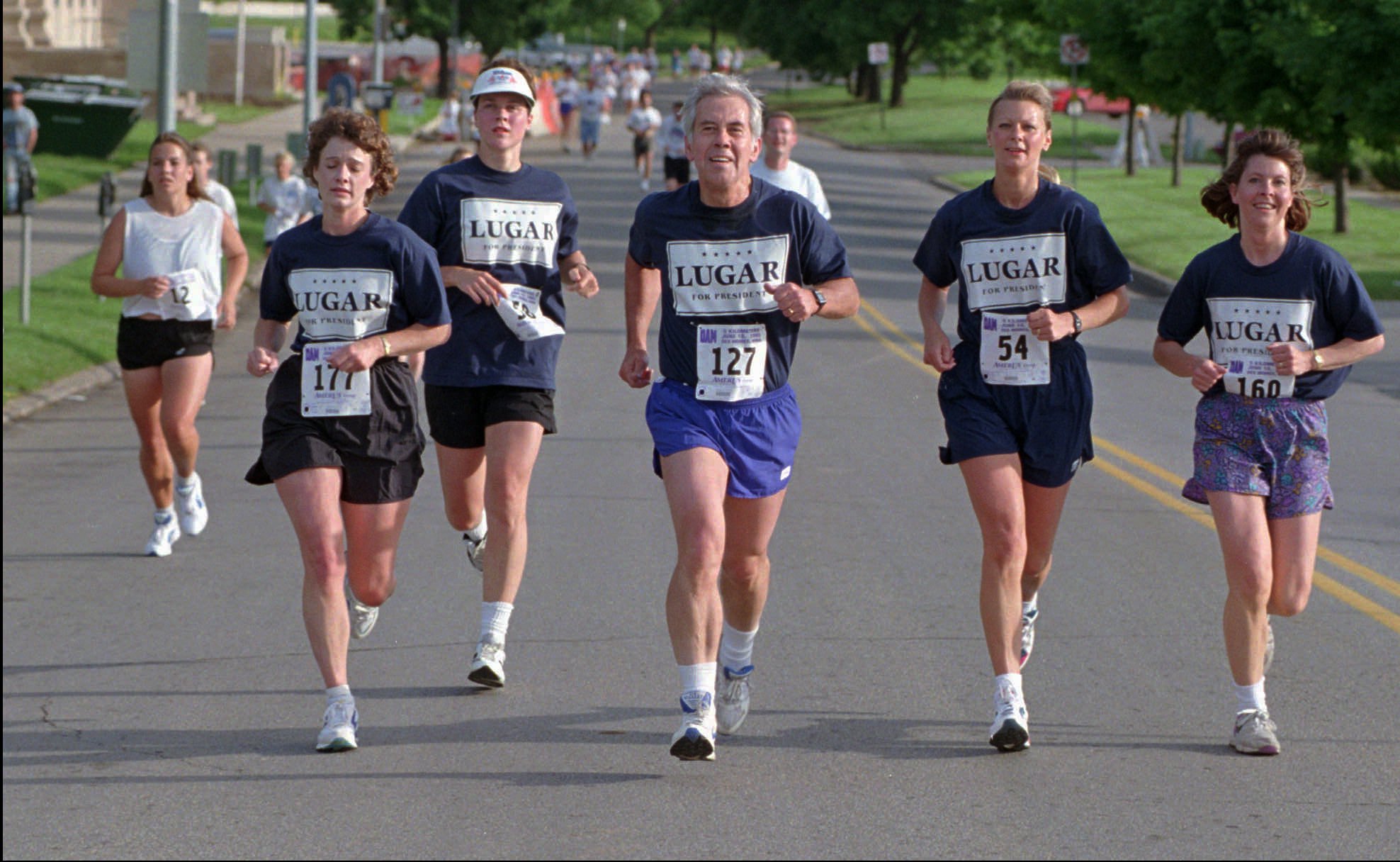 He himself acknowledged his quiet nature: "I know that people say I’m far too low-key, even that I’m dull," he told Time in 1995.

Unable to gain momentum, Lugar finished seventh in Iowa and fifth in New Hampshire; his best showing was a fourth-place finish (14 percent) on March 5 in Vermont. After that, he exited the race and endorsed eventual nominee Bob Dole.

Back in the Senate, he remained a symbol of what a grown-up could accomplish on the Hill. “He’s a class act and a gentleman,” Kerry said in 2012.

In 2008, when candidate Barack Obama wanted to demonstrate he could work across the aisle, he cited Lugar in an ad. "The single most important national security threat that we face is nuclear weapons falling into the hands of terrorists," Obama said in a campaign ad. "What I did was reach out to Sen. Dick Lugar, a Republican, to help lock down loose nuclear weapons."

But when Mourdock, the state treasurer, challenged him in 2012, Lugar was caught napping. With Obama in the White House, Indiana’s Republicans wanted someone who was more reliably conservative. Bolstered by tea party support, Mourdock ousted Lugar in the primary.

The defeated senator saw dangerous forces at work. "A large part of the Republican Party of Indiana believed, apparently, in the idea of individualism as opposed to community, a sense of no compromise as opposed to talking across the aisle," Lugar said.

His shocking defeat became a symbol for Beltway insiders of what could go wrong in the face of grassroots opposition. Lugar’s name, by the 2014 cycle, was a verb. "I think," commentator Ana Navarro said of Republican incumbents in 2013, "you’re going to see them win their primaries because they’re taking it seriously, they’re campaigning hard, they’re raising the money and they’re doing what they have to do. They’re not about to get Richard Lugared."

After leaving office, he established the Lugar Center, a public policy institution in Washington. Meanwhile, he and Nunn remained committed to the cause of curbing nuclear weapons and other weapons of mass destruction. In April 2015, the two of them wrote a column for POLITICO Magazine in favor of the nuclear arms deal with Iran. "Holding out for the impossible is a recipe for no progress at all. Congress should take the same approach today to the Iran nuclear deal."

In making their case, they cited their joint expertise.

"During our combined 60 years in the U.S. Senate, we participated in countless meetings, hearings and trips around the globe focused on reducing the threats posed by weapons of mass destruction," they wrote.

Lugar was the second longtime Indiana senator to pass away this year. Bayh died March 14.