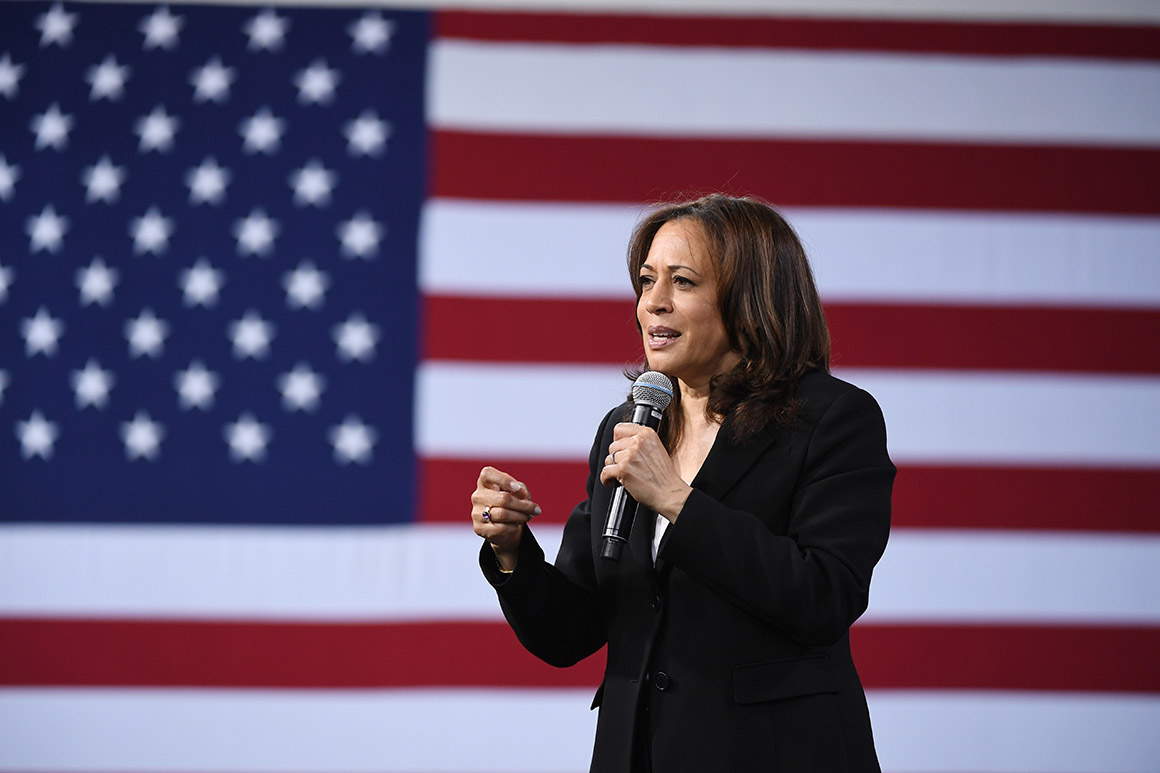 LAS VEGAS — Republicans have long believed that if only the economy held up, President Donald Trump could win a second term.

Following another spate of positive economic news — and without a cohesive economic message of their own — many Democrats are starting to fear he might.

Anxiety on the left reached new heights last week, with the government reporting that the nation’s economy had grown at an unexpectedly fast pace in the first quarter of the year. While Trump took credit for the surging economy, Democratic presidential contenders were immersing themselves in the Mueller report and debating whether incarcerated felons should be allowed to vote.

By Thursday, prodded by former Vice President Joe Biden, they were revisiting the violence at a white supremacist rally in 2017 in Charlottesville, Virginia. In his own campaign announcement video, Biden did not explicitly mention jobs or the economy once.

“We don’t really have a robust national message right now” on the economy, said Celinda Lake, a leading Democratic strategist and pollster. “We will tend to talk about things like paid leave and equal pay — and those things are all very popular policies. But they don’t add up to an economic message that is robust enough to win the presidency and beat Donald Trump, who talks about a very robust economic policy.”

She said, “You may agree or not with it, but you know what [his message] is. And Democrats, you don’t know what it is. And that’s a recipe for disaster in 2020.”

Before a forum on wages and working people here Saturday, Mary Kay Henry, president of the Service Employees International Union, said that despite “good, specific ideas for certain sectors of the economy that have been put forward,” labor organizers still “are looking for a comprehensive response” from Democrats on the economy.

In part, Democrats’ inability to advance a focused message on the issue is a function of the breadth of the primary field — a presumably curable condition once the party selects a nominee. Every top tier Democratic candidate speaks frequently about significant parts of the economy, from income inequality to the cost of health care and higher education. And most progressive Democrats advance those concerns as part of a broader call for a fairer economy. But with its diffuse voices, the party has not yet tied it all together in a disciplined and specific economic argument designed to counter Trump.

“We have an economy in this country that is not working for working people,” Sen. Kamala Harris (D-Calif.) said at the labor forum in Las Vegas. Or as Sen. Elizabeth Warren (D-Mass.), put it, “Let’s make the zillionaires pay a fair share.”

It is unclear what variation of that message will stick — or what policies supporting it might break through with voters. During the daylong forum organized by SEIU and the Center for American Progress Action Fund, Warren, Harris and four other presidential contenders took turns lamenting inequities in the nation’s economic system and the challenges facing low-wage workers and the middle class. Sen. Amy Klobuchar (D-Minn.), cast her infrastructure spending plan as an economic measure, while Harris called for banning “right-to-work” laws and touted a $6,000 tax break that she has proposed for families earning up to $100,000 annually.

Former Colorado Gov. John Hickenlooper outlined a plan for a nationwide minimum wage of $15, with the wage raised incrementally and indexed to an area’s cost of living to provide for higher minimums in high-cost areas of the country. Former Rep. Beto O’Rourke of Texas promised to undo the “worst excesses” of Republican-passed tax cuts, and his fellow Texan, former San Antonio Mayor Julián Castro, called for an expansion of the earned income tax credit and investments in affordable housing.

In his own campaign, Castro said to applause, he is paying even his interns $15 an hour.

“We need to get back to an America where everybody counts in this country,” Castro said. “We need to change presidents, and then we’ll be on a better path.” 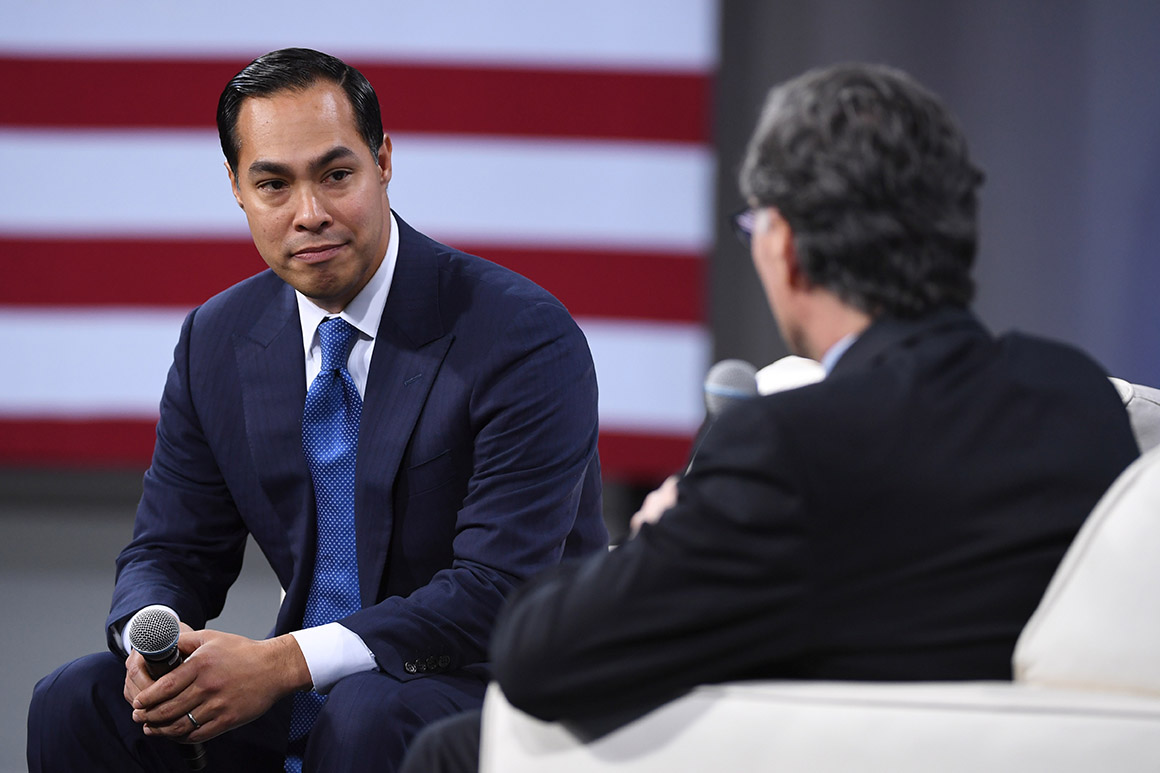 The challenge for Democrats, Henry said, is to “unpack that the economy is working for the few,” while “the overwhelming majority of Americans, they’re working two and three jobs and can’t make ends meet.”

In the absence of an economic slowdown, however, Trump is still benefiting from top-line numbers that Democrats are having difficulty undermining. Unemployment remains low, the economy is expanding and, on Friday, the S&P 500 and Nasdaq stock indices both reached record highs.

According to a recent CNN poll, 71 percent of Americans rate the nation’s economic conditions favorably. On an issue that voters reliably say they care deeply about, Trump’s otherwise dismal public approval ratings are holding above 50 percent.

“Our view is that Democrats would be very wise to recognize how steep the mountain is on the economy,” said Matt Bennett of the center-left group Third Way. “There are things about this economy that are very popular — low unemployment, a lot of jobs, there’s been some real wage increase. We attribute zero, zero percent of that to good Trump policy … But he will claim credit, as he does for the sun rising and everything else, and we have to be aware that that could be potent.”

He said, “What that means is that we need a very clear economic narrative that resonates deeply with the voters that we have to win, and we better not be caught up in our own blue bubble world.”

In some ways, Democrats find themselves today in exactly the same rhetorical position Trump occupied in 2016. During the presidential election that year, it was Hillary Clinton pointing to unemployment and wage growth as proof of the economy’s strength with a Democrat, Barack Obama, in the White House — and Trump discounting favorable economic data.

Experts disagree about the effect that economic anxiety — as opposed to racial or cultural unrest — had on the 2016 election. But on the economy, Trump effectively painted at the margins, arguing that despite its overall health, the nation’s economic system was not working for those he persuaded to vote for him.

Now it is Trump citing the statistics he once derided as fraudulent, while Democrats argue economic indicators fail to fully depict the state of the economy.

Following the Commerce Department’s growth report Friday, Trump reveled in what he called an “incredible number” and an economy that he said is “doing great.” Meanwhile, former Senate Democratic Leader Harry Reid of Nevada was arguing in a conference call with reporters, “It’s stunning that we have the lowest unemployment since the 1960s, but yet we have people who can’t find jobs.”

Sara Nelson, international president of the Association of Flight Attendants-CWA, said the challenge for Democrats ahead of 2020 is to focus on “what people are actually experiencing.”

If Democrats can do that, she said, “then people are going to change their mind about how they connect Trump to this economy.”

Nelson is optimistic that the party’s presidential candidates can craft a winning message on the issue.

However, she said, “I don’t think we’re there yet.”