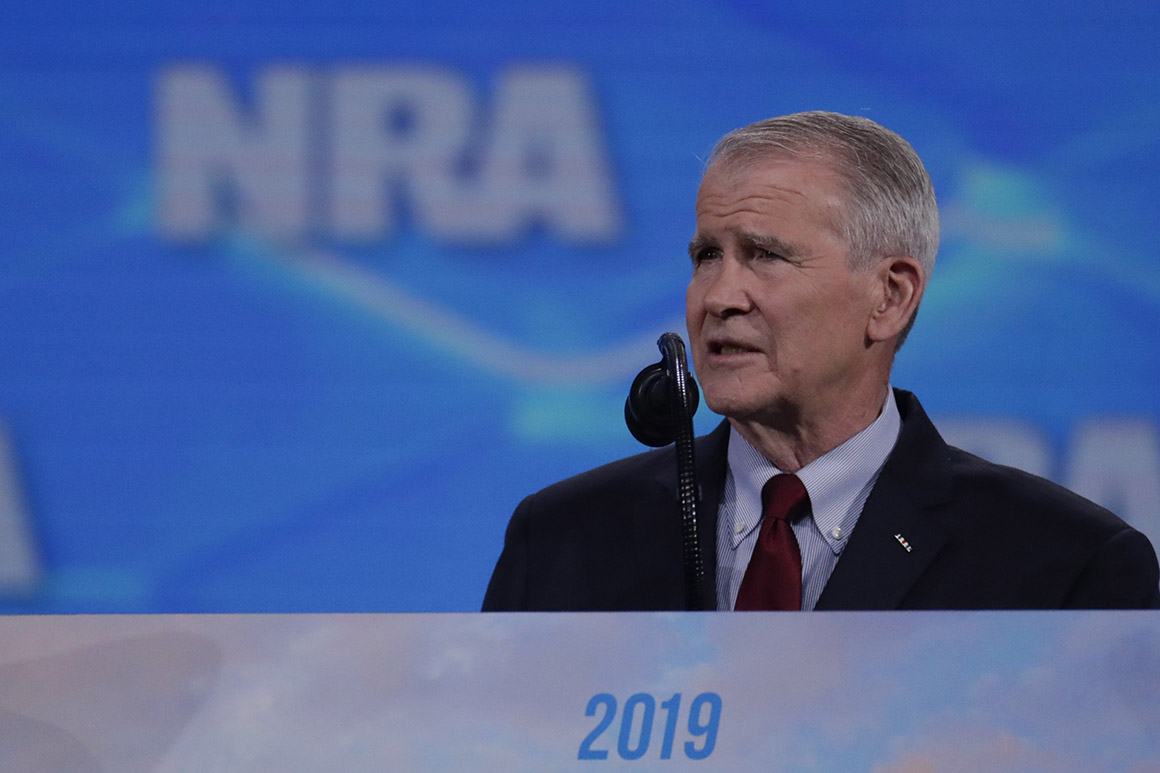 National Rifle Association officials announced Saturday that Oliver North has stepped down as president of the influential gun rights group — a move that came amid what North described as “a clear crisis” in his resignation letter.

The dramatic announcement kicked off the third day of the organization’s annual conference in Indianapolis, which has included appearances by several Republican lawmakers and President Donald Trump. Despite its large crowds and high-profile guests, the conference this week has been overshadowed by a rift inside the group over allegations of financial misconduct.

“After resuming office as NRA president in September of 2018, I was confronted by NRA members and board members who expressed concern about the amount of money the NRA was paying to the Brewer law firm,” North wrote, adding that the matter “needs to be dealt with immediately and responsibly so the NRA can continue to focus on protecting our Second Amendment.”

Just days earlier, LaPierre claimed in a letter to board members that he was being both pressured to give up his post and extorted by North, 75, a former Marine Corps lieutenant colonel who was named president of the NRA last May. LaPierre’s letter was first reported on by the Wall Street Journal.

According to the Journal, LaPierre warned in his own letter that Ackerman McQueen, the NRA’s largest outside advertising firm, was prepared to send a document to the group’s board at the direction of North that contained “a devastating account of our financial status, sexual harassment charges against a staff member, accusations of wardrobe expenses and excessive staff travel expenses.”

“I believe the purpose of the letter was to humiliate me, discredit our Association, and raise appearances of impropriety that hurt our members and the Second Amendment,” LaPierre reportedly wrote, adding that it would be “bad for me” and “two other members” of the group’s executive team.

A spokesman for Ackerman McQueen did not immediately respond to a request for comment. The Oklahoma-based firm was sued by the NRA earlier this month over allegations that it was deliberately concealing details about how it was spending millions of dollars received by the group.

The dispute between North and LaPierre roughly began when the lawsuit against Ackerman McQueen was first filed, a move that put the fate of NRATV in question. The subscriber-based streaming service has often stirred controversy in the wake of mass shootings for its commentary about stricter gun laws. North was hired by Ackerman McQueen last year to host a documentary series for NRATV and his contract with the agency was mentioned in the lawsuit.

LaPierre, who previously claimed that North sought to make NRA president a paid position, earned “millions of dollars annually” through his contract with the ad agency.

The NRA’s 76-member board is scheduled to convene Monday for a pre-planned meeting, during which the issues plaguing the group are expected to come up for discussion.