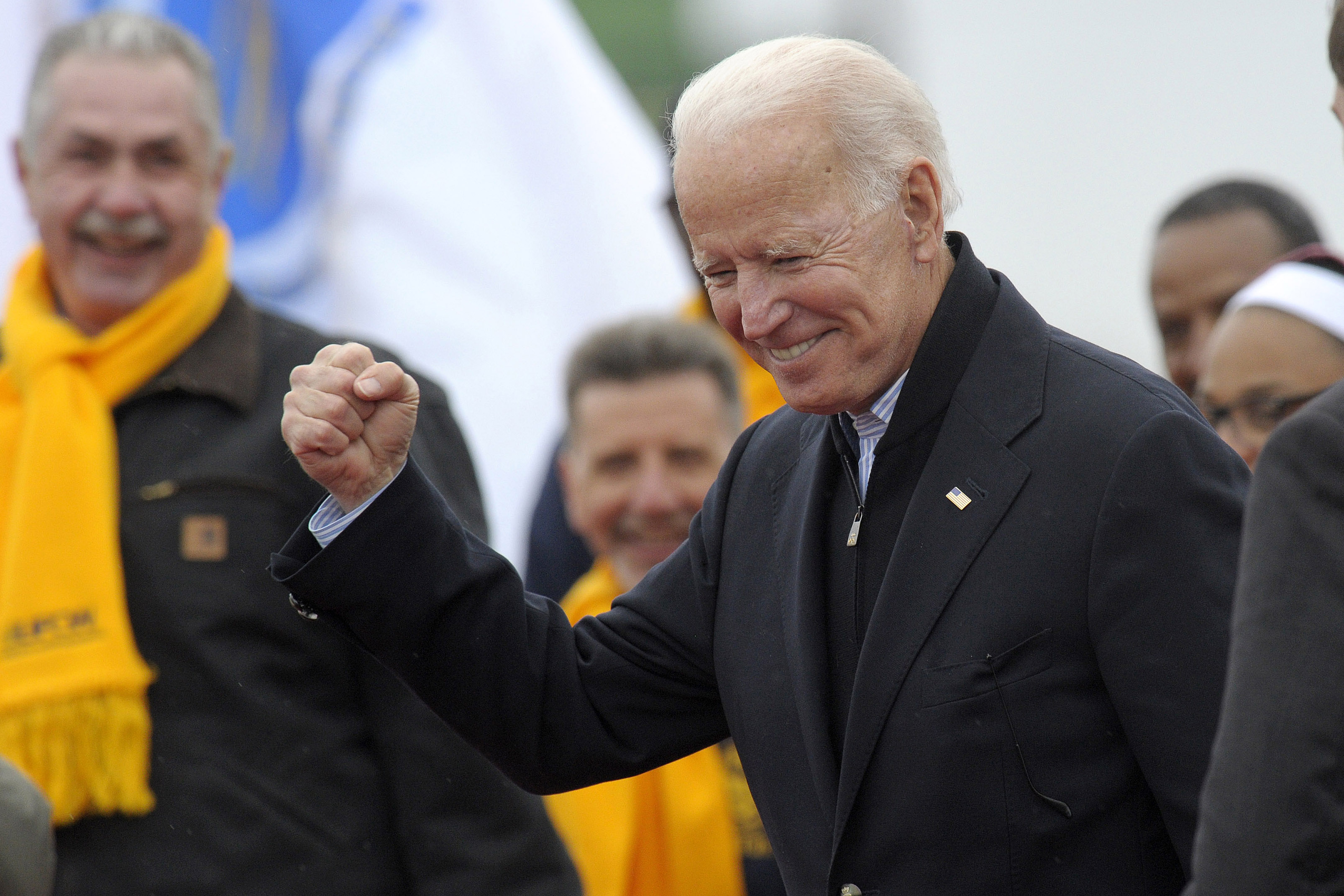 His political operation is still taking shape. There are concerns about whether he’ll be able to raise enough money to compete. He hasn’t run his own campaign in over a decade.

What Joe Biden does have, however, are strong ties to organized labor. And on the eve of his expected entry into a primary where 19 other Democrats have a head start, the former vice president is counting on his longtime union allies for a show of force.

It’s a powerful reminder that whatever hurdles lie ahead for Biden on the campaign trail, he enters the race with a reservoir of goodwill from a key Democratic constituency. But it also emphasizes the traditional nature of his candidacy in a diverse and crowded primary where that may not be an asset.

After announcing his 2020 bid in a video to be released Thursday, Biden is expected to formally kick off his campaign with a Monday rally at a Pittsburgh union hall. United Steelworkers President Leo Gerard said Biden can count on steelworkers to turn out on Monday, including many “wearing their USW gear.” The same holds true for the International Association of Fire Fighters, according to an IAFF spokesman.

For Biden, labor’s heavy presence would serve to underscore an argument central to his case for the Democratic nomination: that he continues to be serve as the party’s best-known emissary to working-class whites, the precise demographic that Donald Trump picked off in key industrial states like Pennsylvania in 2016.

“Clearly many of us in the labor movement and in our union are friends with Vice President Biden. He’s been a true supporter of working people and their agenda. He’s someone who we’ve worked with a lot and we all admire tremendously,” Gerard told POLITICO, though he cautioned that a formal primary endorsement hasn’t yet occurred and must go through internal processes. “I can say that it would be an understatement to say that our members admire and look forward to working with Vice President Biden. He’s been strong in particular on infrastructure and jobs.”

In the run-up to his announcement, Biden has put in his time in front of labor groups, including recent speeches before the International Brotherhood of Electrical Workers and the IAFF. Last week, Biden appeared at the Stop & Shop supermarket strike in Dorchester, Mass., with Boston Mayor Marty Walsh, himself a strong labor supporter and Biden ally.

“I think there is one thing that is inarguable: the Democrats as a party and the presidential candidates, have had problems with union members defecting to Republicans since the Reagan era,” said Larry Rasky, a Boston-based consultant who worked on both of Biden’s previous presidential campaigns. “Everybody knows that the candidate with the best chance of bringing union members — not necessarily the leadership but the rank and file — back into the Democratic fold is Biden.” 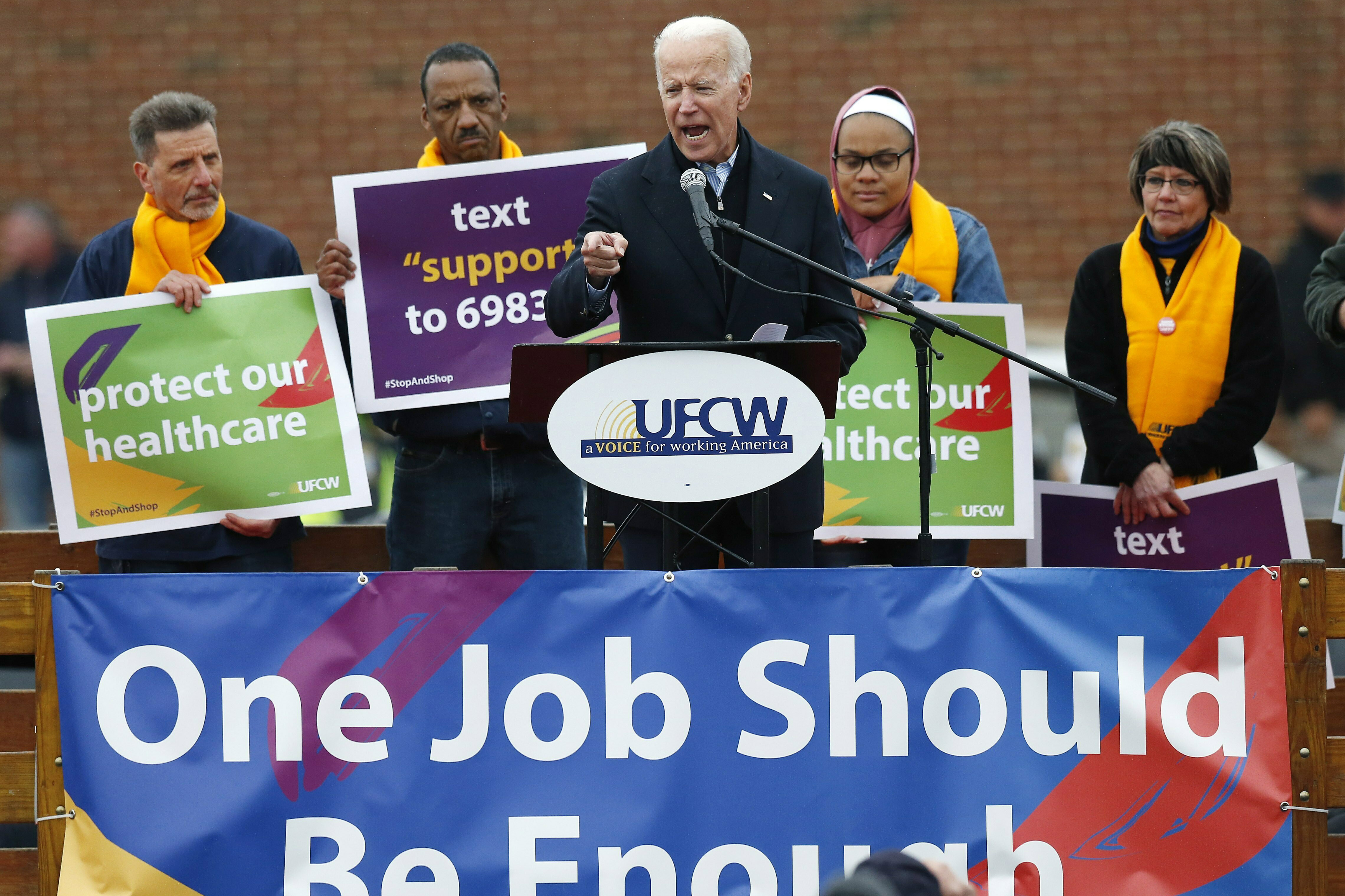 Hosting a kick off in a Western Pennsylvania union hall, places Biden in his element. Last year, Biden joined Pennsylvania Sen. Bob Casey at the IBEW Local 5 in Pittsburgh and made a deep impression on a Pennsylvania Democratic operative who noted that Biden “was electric. He has a real connection. There was a cross-section: old-school union guys, young biker folks covered in tattoos and moms with babies. And Biden didn’t have any staff. He just showed up and worked the room, and people loved him.”

Labor’s prominent role isn’t merely limited to the campaign launch. Earlier this week, International Association of Fire Fighters president Harold Schaitberger told POLITICO a Biden endorsement was all but certain, and part of that support would translate into foot soldiers in early presidential states.

“We’ll be focused on the early caucus in Iowa. In South Carolina, we have a fairly sophisticated political operation, a pretty large cadre of very experienced, capable, skilled leaders that really know how to operate within a political environment,” Schaitberger said. “We have a very good footprint in New Hampshire and understand the primary process there. We’ll be able to do our part. It’s not just a paper endorsements.”

An early state organizer with knowledge of Biden’s strategy, said the campaign-in-waiting has for weeks began laying the groundwork to lure rank-and-file union members to his camp — even if their own union doesn’t formally endorse Biden in the primary.

“When you look at Secretary Clinton, the union leadership in the primary got behind her but at the average member level, there was not much excitement,” the organizer said. “In this case, I think the average member of the labor union is interested in supporting Joe Biden … looking at both for the primary and general, there’s going to be a lot of focus on getting support from both labor leadership and average labor members.”

Though Biden’s event is planned at the Teamsters Local 249 in Pittsburgh, according to the national group, though a local union representative said the venue “isn’t confirmed” and the chapter’s president didn’t return calls for comment. A spokesman for the national Teamsters said Biden is not being endorsed — at least not yet — by the union.

“The campaign reached out to the local chapter to host the union hall and, as with any pro-labor candidate, they were afforded that courtesy. Just because you have an event at the hall, it doesn’t mean there’s an endorsement,” said a national spokesman, who wanted to speak anonymously to avoid giving an official position.

The Teamsters, along with the International Brotherhood of Electrical Workers, say they’re going through the process now of vetting candidates and preparing to poll members to issue endorsements.

“There were three reasons Barack Obama chose Biden as a running mate: his foreign policy chops, his debating skills and the third was his appeal to working class voters, particularly in the Midwest,” Rasky said. “He delivered on all three of those accounts. Those ethnic, blue collar voters, what we refer to as ‘Reagan Democrats,’ they are the people we need to turn the electoral college on Trump. I think it’s apparent to the leadership for a lot of unions that Joe is the guy who can deliver.”