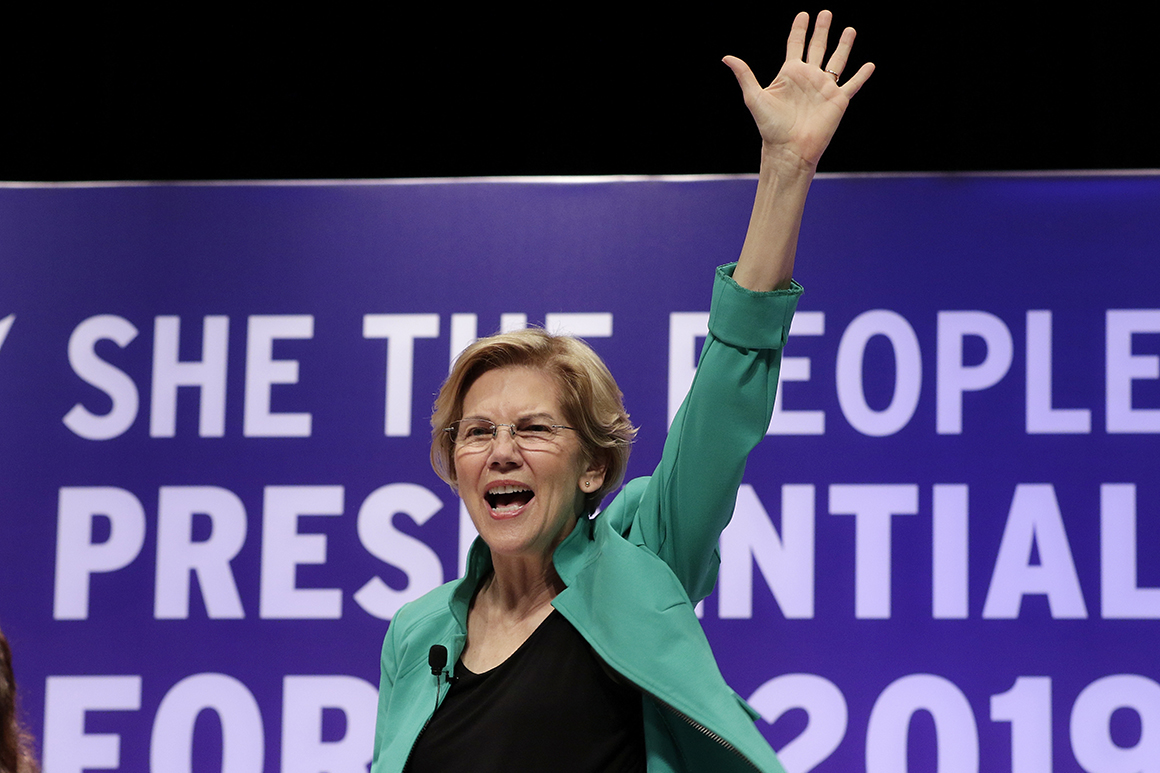 HOUSTON — The women of color who packed into a university auditorium here Wednesday for a first-of-its-kind presidential forum delighted in the rhetoric of candidates who vowed to make Donald Trump a one-term president.

But their frustration was just as palpable — over the heavy media attention being paid to white male candidates in the early days of the Democratic primary, and over polling they contended is feeding a misleading narrative that only a white man can defeat Trump.

“With all due respect to the vice president, he hasn’t even announced yet but he’s the frontrunner?” Leah Daughtry, a political operative and former Democratic National Committee official who helped organize the “She the People” event, said of Joe Biden. “Racism and sexism are part of the fabric and the fiber and the founding of our country, she added, “and the way that the [Democratic] candidates are being treated, it just reminds you of that. We’re not past it.”

A procession of Democratic hopefuls took the stage, including Bernie Sanders, Elizabeth Warren, Kamala Harris, Beto O’Rourke and Cory Booker, and were all asked why women of color should vote for them. Warren won the crowd with her detailed ideas, garnering cheers whenever she said dropped the line, “I have a plan.” Sanders got a less enthusiastic reception, though he was praised for showing up. And Harris revved up the crowd when she mocked politicians who’ve “evolved” on the opioid crisis: “Where were they when they had what was called the crack epidemic?”

The four-hour forum provided a snapshot of bubbling tensions among many Democratic women who are annoyed that the race looks like it could just as easily be unfolding in 1979 as 2019 — despite an historically diverse field.

Much of the discontent focused on Biden. He, along with another white man, Sanders, has dominated early polling even though he’s not even officially been a candidate. After weeks of deliberation and delay, Biden is set to announce on Thursday.

Aimee Allison, who co-founded She the People, said she thinks the polling is premature and has distorted the public’s perceptions about which candidates are viable or not. She said it’s an “open question” whether the former vice president can win over women of color in large numbers.

“He’s going to enter a really different world,” said Allison. “It’s a world in which we’ve woken up as women of color and we’re not just going along to get along for a Democratic Party insider.”

Others like LaTosha Brown said the media is “complicit” in boosting white male candidates.

“When you got a media that’s constantly saying Biden and Beto and Bernie and literally elevating the male candidates, I think that’s going to be reflected in the polls,” said Brown, who co-founded Black Voters Matter, a group that works on mobilizing the black community.

A’shanti Gholar, political director of Emerge America, which recruits and trains women to run for office, lamented that when Warren rolled out an ambitious public lands policy earlier this month, "the media was focusing on Pete Buttigeig expressing his sadness about Notre Dame in French."

Then there’s the “electability” question that candidates like Harris and Warren are required to answer, said several of the women in attendance, but others like Buttigeig are not.

“Electable is code word for the type of leader [people are] used to seeing, the type of leader [they’re] comfortable with,” said Sayu Bhojwani, president of New American Leaders Action Fund, which helps immigrant candidates run for office. “And that is absent any understanding of the systemic issues that prop up white men.”

Wednesday’s forum — packed with vendors, operatives, voters, organizers and longtime Democratic Party leaders — told a different story than the one reflected in early polls. Warren and Harris received the warmest responses from the crowd of roughly 1,5000 black, Latino, Asian, Native American, and Arab women — not Sanders or O’Rourke.

Sanders received notable groans and grumbles from the audience when he gave a roundabout answer to a question on what he would do to curtail white supremacist terrorism. When pressed on what he would do for black women or why women of color should vote for him, Sanders repeatedly pointed to his history of joining the 1963 March on Washington, being “one of the few white elected officials” to support Jesse Jackson’s presidential campaign and his civil rights record.

Afterward, Allison said that Warren "stole the show.” She plans to organize "She the People" town halls across the country to educate and mobilize women of color ahead of the election next year.

“You have to really point out Elizabeth Warren’s performance here today,” added Maria Urbina, political director for the progressive group Indivisible. “She was specific, she didn’t just rely on her record.”

At one point on stage, Warren, who has made inroads with black voters lately, was asked how she’ll address people who after 2016 feel they may need to “flee to the safety of a white male candidate.”