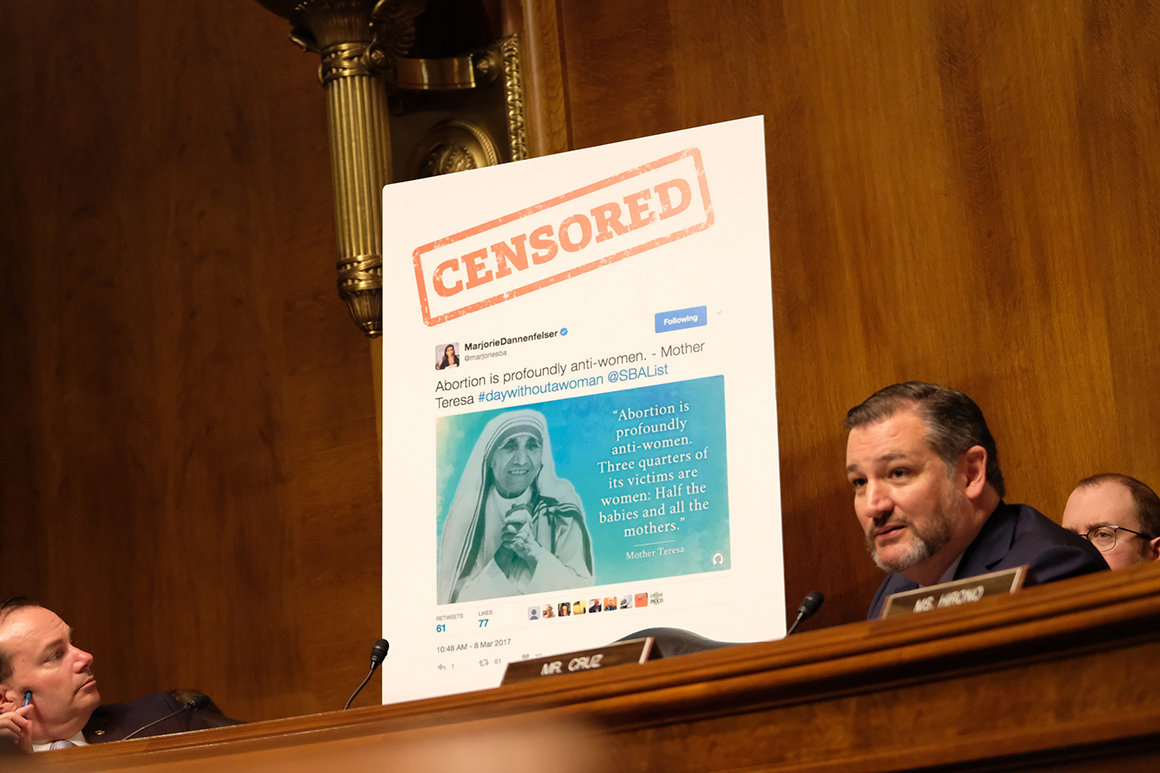 Ted Cruz and Elizabeth Warren have bonded over ripping Facebook. Massachusetts liberal Ed Markey has teamed up with Missouri conservative Josh Hawley to sponsor an online privacy bill. Even Nancy Pelosi and Donald Trump have found a common target in tech, each jabbing the industry over a series of perceived misdeeds.

From the most conservative free market Republicans to staunchly progressive Democrats, the desire to rein in the tech sector has created surprising new partnerships among political enemies.

Democrats have long counted Silicon Valley as part of their political base, while Republicans have pushed for a hands-off approach to tech innovation. But in Washington, the distrust from both parties regarding how the tech industry has handled itself on everything from privacy to political discourse makes it clear that Congress is hungry to bring about a tougher era of government regulation.

“I think we’ve reached a tipping point. I think it’s a sign there’s really no going back from here," said Michelle Richardson, director of the Center for Democracy and Technology’s Privacy and Data Project. "The interest here is deep and will be long-term and there’s no way we’re going to get out of having some federal regulation on some of these issues.”

Specific issues that have already drawn cross-party buy-in run the gamut from antitrust enforcement to bolstering publishers’ power against tech platforms to the protection of children’s data. Nearly all, however boil down to a central concern over tech giants’ market power as well as the outside command that power gives them over both the terms of online conversation and the handling of Americans’ most private information.

That shared concern could seriously boost the prospects of not just the targeted bills that odd couples have produced so far, but also more sweeping legislation aimed at reining in tech titans like Facebook, Google and Amazon, particularly with respect to their vast scale and power and their data practices. And it lends heft to 2020 presidential aspirants’ pledges to crack down on Silicon Valley, as Democratic candidates like Sens. Warren (Mass.) and Amy Klobuchar (Minn.) already find themselves developing common cause across the aisle on tech issues.

“I think all of these issues relate to getting the economy to work for the American people, respond to these tremendous concentrations of economic power and the enormous dominance of certain technology platforms,” Rep. David Cicilline (D-R.I.), who’s sought to work on tech policy with conservative Republicans including Reps. Matt Gaetz (Fla.) and Doug Collins (Ga.), told POLITICO. “It’s not just one group, Republican or Democrat or independent; it’s being felt by the American people.”

The point of unity between Warren and Cruz (R-Texas) was more a one-off than a concerted legislative effort. But it still proved striking given the participants, as a leading figure of the Democratic left and a famously prickly, firmly conservative Republican found major rhetorical overlap in their views of social media. Warren last month took issue with a POLITICO report that Facebook briefly took down a few of her campaign ads calling for the breakup of the company, saying it showed the social network “has too much power.” Cruz found himself leaping to her defense.

“First time I’ve ever retweeted @ewarren But she’s right—Big Tech has way too much power to silence Free Speech,” Cruz tweeted in response to the post, adding that the company posed “a serious threat to our democracy.” Weeks later the Texas Republican quoted Warren’s tweet at a Senate Judiciary hearing on allegations of an anti-conservative bias in tech — another first for the pair of lawmakers.

The trend encompasses both houses of Congress, and the Senate in particular has seen a number of unexpected partnerships form as part of a push to craft new rules for how companies handle consumer data.

One such odd pairing: Markey (D-Mass.), a liberal privacy hawk who has embraced the Democratic Party’s rising progressive flank, and Hawley (R-Mo.), a prominent GOP tech critic who fashions himself a libertarian-leaning conservative.

Despite their other policy differences, the lawmakers recently joined to unveil a broad-reaching bipartisan measure to expand children’s privacy protections. In rolling out their bill, Markey framed the topic as a rare area of consensus for lawmakers on Capitol Hill. “If we can agree on anything, it should be that children deserve strong and effective protections online,” he said in a statement.

Meanwhile, a number of other cross-party Senate pairings — including Sens. Klobuchar and John Neely Kennedy (R-La.) and Sens. Brian Schatz (D-Hawaii) and Roy Blunt (R-Mo.). — have teamed up to unveil their own bipartisan data privacy bills, as lawmakers in both houses talk up plans to address the issue.

In the House, Cicilline has been one of the more vocal lawmakers in highlighting the opportunity for meaningful bipartisan cooperation on tech. He recently teamed up with Collins, the House Judiciary Committee’s top Republican, to reintroduce a bill that would give news publishers greater leverage to negotiate how online platforms distribute their content. The measure would amend existing antitrust statutes to grant publishers safe harbor to negotiate collectively with large platforms like Facebook and Google.

And Cicilline has even found common ground with Gaetz, a Trump surrogate who’s made his name on winding up liberals, despite the two lawmakers trading blows on Twitter over other issues on which they’re diametrically opposed. Cicilline is primarily concerned about anti-competitive practices by Google and Facebook, while Gaetz has spearheaded allegations that the internet giants suppress conservative views. But they’ve quietly discussed working together on tech issues, including, Gaetz says, in a series of one-on-one huddles on the House floor.

“Mr. Cicilline and I disagree on some issues. We agree on others. This is one where I think we will find agreement,” Gaetz told POLITICO.

A Cicilline spokesperson confirmed the lawmaker has "discussed tech-related issues with Gaetz directly," and Cicilline said he and his staff are in “constant communication” with House Judiciary Republicans and their teams, including Gaetz’s, on tech issues.

The charge of anti-conservative bias in tech championed by Gaetz in recent years has risen from a fringe right-wing talking point to the highest levels of the Republican Party, with Trump emerging as a consistent critic.

“They don’t treat me well as a Republican. Very discriminatory, hard for people to sign on. Constantly taking people off list,” Trump said in a pair of tweets, adding: “No wonder Congress wants to get involved — and they should. Must be more, and fairer, companies to get out the WORD!”

To be sure, given the broader partisan division that’s gripped Washington, some are cautious in considering whether the curious alliances will actually succeed in delivering meaningful regulation for the tech industry.

"They’re bedfellows, maybe, but it’s like a king-sized bed. I think there’s still a fair of room between them on a fair amount of issues," said Justin Brookman, director of consumer privacy and technology policy Consumer Reports. "Certainly you’re seeing the rhetoric align a little more, and that’s important. But whether we’ll see action? We’ll see."

But Brookman added that "common rhetoric and acknowledgment of the problem is a really important first step" toward concrete legislation. "The first step is a common understanding that there’s a problem, and we’re definitely seeing a lot more of that," he said.