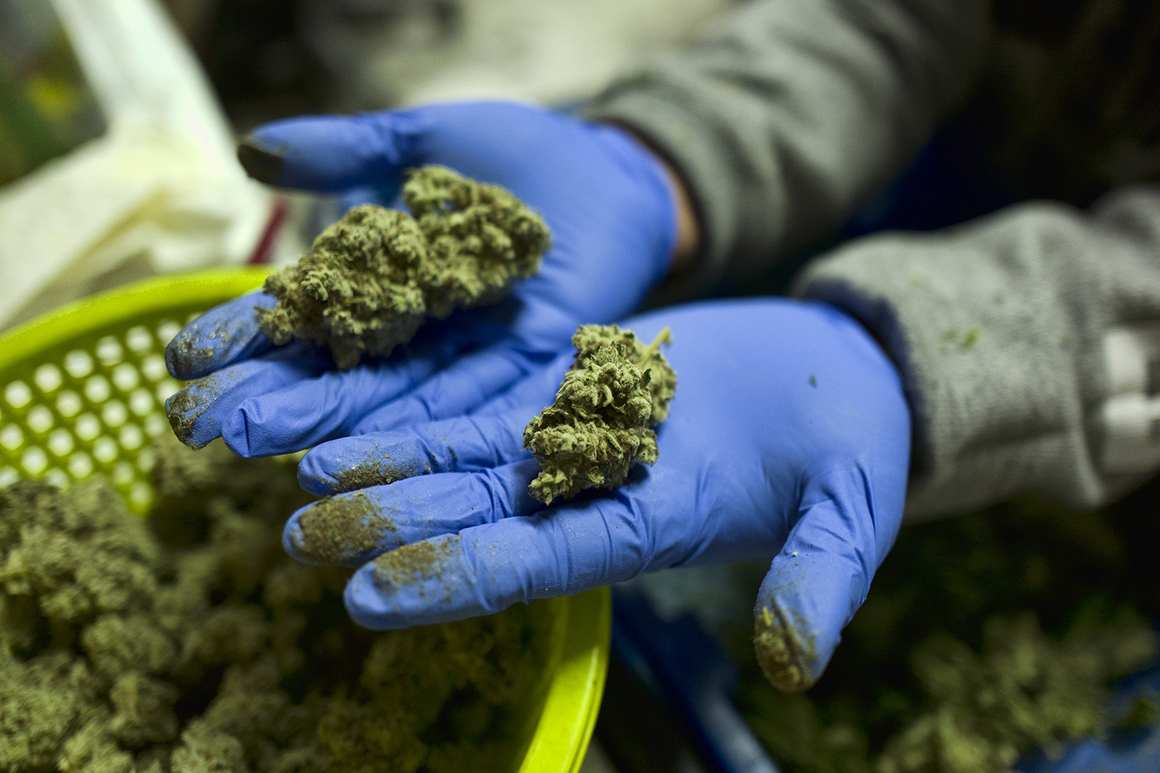 The arrival of corporate giants and K Street firms represents a tipping point for the mainstreaming of marijuana legalization in Washington, even while marijuana remains illegal at the federal level. And while there’s a long way to go before Congress goes the way of 30-plus states and legalizes medical or recreational sales, it’s clear that special interests think there’s money to be made trying to change federal drug policies.

There are already signs of progress — one bill loosening banking rules has already advanced out of a House committee — and the action is expected to heat up with Democrats in control of the House and Democratic presidential candidates backing marijuana legalization.

Cannabis companies spent $2.7 million on lobbying last year — a sixfold increase over just two years ago, according to the Center for Responsive Politics — and advocates believe the latest efforts could be enough to cement the burgeoning industry’s legal status, more than six years after Colorado and Washington launched the modern legalization movement by approving ballot initiatives authorizing recreational use.

“For the first time in my six years of doing this, you actually have a chamber of Congress that’s willing to have an adult conversation about this,” said Michael Correia, director of government relations at the National Cannabis Industry Association, the most established pot business lobby. “That is definitely a sea change.”

There are now five different industry groups working to liberalize cannabis laws, including three formed within the last year. One of those fledgling groups — the Cannabis Trade Federation — boasts that it’s capable of mobilizing two dozen lobbyists to twist arms on Capitol Hill if needed.

Their work is starting to reap dividends in the Democratic-controlled House. Last month, the Financial Services Committee overwhelmingly passed legislation that would shield banks and credit unions from federal regulatory penalties if they do business with cannabis companies legalized at the state level, with 11 Republicans joining all of the Democrats present in backing the bill.

“It’s definitely better than it was last year, it’s better than two years ago, and I think we’re going to be even stronger next year,” said Andrew Smith, senior vice president of external affairs for Surterra Wellness, which operates 23 medical marijuana dispensaries in Florida.

Cannabis companies argue that legalization bolsters economic growth through tax collections and the creation of tens of thousands of jobs. Cowen analysts project sales could hit $80 billion by 2030. Cannabis interests further emphasize that the potential therapeutic benefits of their products have been suppressed by federal restrictions that hinder medical research.

But major hurdles remain, starting in the Republican-controlled Senate, where Majority Leader Mitch McConnell has shown no signs of warming to the legalization push and powerful chairmen like Judiciary’s Lindsey Graham (R-S.C.) and Finance’s Chuck Grassley (R-Iowa) aren’t seen as allies of the industry.

“It makes it hard to see the path forward for cannabis legislation in this Congress,” said John Hudak, a senior fellow at the Brookings Institution and author of "Marijuana: A Short History."

The legalization debate also is freighted with racial and economic justice issues stemming from the decades-long war on drugs. Advocates for overhauling drug laws want any legalization plan to clear the records of individuals with past convictions for marijuana possession and help minority groups that bore a disproportionate share of such convictions access funding to launch marijuana businesses.

“We can’t trust that if we just push things through that at some point in the future we’ll come back and do all this equity stuff,” said Shanita Penny, president of the Minority Cannabis Business Association. “It ain’t happening. The people in power aren’t going to let it happen.”

Despite the burst of activity, the cannabis industry remains a tiny K Street presence compared to powerhouses like the pharmaceutical and defense industries. In the first quarter of this year, cannabis companies spent just over $1 million on lobbying efforts, according to disclosure reports.

But that doesn’t include moneyed interests from other industries that have a growing stake in cannabis issues. Among the 84 entities that listed cannabis or marijuana on lobbying disclosure reports for the first quarter are Constellation Brands, Mastercard and the National Association of Federally-Insured Credit Unions.

“The millions of dollars these companies are dumping into an army of tobacco-style lobbyists on Capitol Hill is a fraction of the billions these companies will rake in if marijuana is fully commercialized,” said Kevin Sabet, president of anti-legalization group Smart Approaches to Marijuana, in a statement to POLITICO.

That rapidly changing landscape could sway holdout lawmakers. Ten states now legalize recreational and medical marijuana use, with voters in Michigan most recently backing recreational sales last November. In addition, 23 states have legalized medical marijuana, according to the National Council of State Legislatures, including deep-red states like Missouri and Utah.

Polling data indicates steadily climbing public support for medical and recreational sales. More than six in ten Americans now back marijuana legalization, according to the Pew Research Center, double the level in 2000.

“In the past, there was concern that if they took on a cannabis client it could undermine other larger clients,” said Galoob, who is a senior adviser to the National Cannabis Roundtable, another industry group. “And so they were very skittish about having a cannabis client as a part of their portfolio.”

Cannabis advocates point to last year’s passage of the First Step Act, which aims to help prisoners successfully transition to post-incarceration life, as evidence that the Senate could yet come around on marijuana legislation. The criminal justice overhaul — which was strongly backed by the White House — passed with overwhelming bipartisan support after McConnell agreed to let it come up for a vote.

“Sen. McConnell is nothing if not attuned to political forces,” Rep. Earl Blumenauer (D-Ore.), the dean of marijuana legalization backers on Capitol Hill, told reporters last week. “Candidly, if I were in his shoes, and wanted to minimize my losses in the 2020 election, I wouldn’t make cannabis a target.”

The 2020 presidential contest could further shake up the dynamic. Almost all Democratic presidential contenders have not only embraced legalization, but are framing it as a criminal and economic justice issue.

The Trump administration has given mixed signals about where it stands. Former Attorney General Jeff Sessions sent tremors through the industry by rescinding a memo stating that federal authorities wouldn’t crack down on states with legal cannabis markets. But his successor, William Barr, suggested during congressional testimony earlier this month that he would support legislation like the STATES Act, which sanctions medical and recreational sales in states where they’ve been authorized.

Sen. Cory Gardner, an embattled Republican incumbent from pot-loving Colorado, said Trump told him he would sign the STATES Act if it got to him.

Justin Strekal, political director for the veteran legalization advocacy group NORML, says the issue has appeal across the ideological spectrum. But he and other advocates argue that it’s not enough for lawmakers to simply address the concerns of industry. They must also tackle the thornier issues around racial and economic justice.

“When we lean in on framing this as a right of individual liberty, individual freedom and individual justice, that’s where we have space to grow in support,” Strekal said.