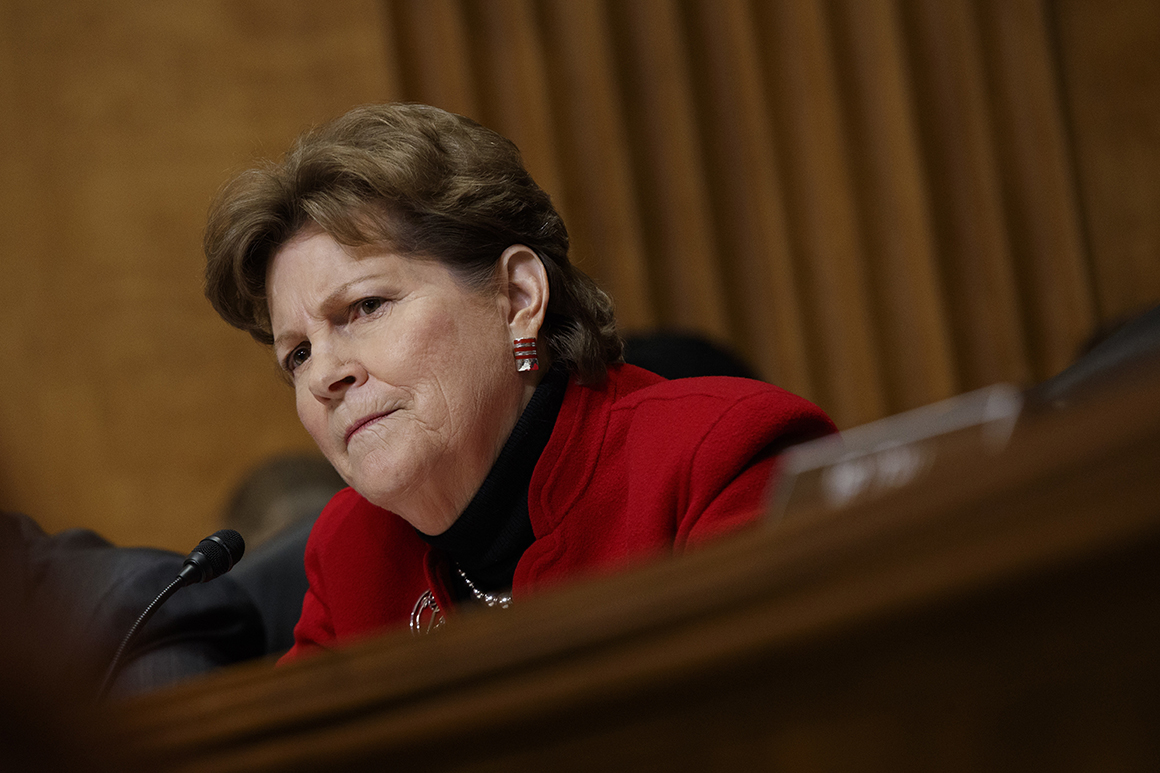 Jeanne Shaheen was facing down Secretary of State Mike Pompeo — and not too pleased about it.

The senator asked Pompeo to push the Afghan government and the Taliban to include Afghan women in peace talks. But he wouldn’t fully commit to doing so.

“Senator, there are lots of issues that we’re working our way through,” Pompeo told her during the exchange in a Senate Foreign Relations Committee hearing last week.

“I understand that, but this is half of the population in the country,” Shaheen shot back.

“Yes, ma’am, and I hope they will make their voices heard,” Pompeo said.

Shaheen, a New Hampshire Democrat and the only woman on the committee, was not reassured.

The Trump administration says it cares about the future of women in an Afghanistan where the Taliban — who have a history of repressing women — may again have political power. State Department officials even hint that the country could lose out on aid funds if women’s rights aren’t protected.

But asked this week if she believes President Donald Trump and his top aides are genuinely serious about the issue, Shaheen was quiet for several seconds, then finally said: “We don’t know the answer to that yet.”

As the peace talks move forward, Shaheen is determined to keep pressing the issue of women. She visited the country last weekend, where she assured worried Afghan women that she’s not giving up on them.

In many ways, though, Shaheen cuts a lonely figure in Washington.

Protecting Afghan women once had vocal bipartisan support in D.C. — it was, after all, a cause célèbre among people ranging from former first lady Laura Bush to feminist heroine Gloria Steinem. But such public declarations have been notably sparse in recent months as the ongoing peace talks offer a shot at a U.S. exit from a war many Americans are eager to end after nearly 18 years.

The relative dearth of U.S. politicians speaking out has some activists fearing that Trump will compromise with the Taliban in ways that will threaten the gains Afghan women have made since 2001, including being allowed to attend school and work outside the home.

“The very fact that we have to say ‘Where are the women? Will women’s rights be protected?’ instead of understanding that all of that is integral to the future of Afghanistan highlights the problem,” said Andrea Prasow of Human Rights Watch.

“It’s Afghanistan fatigue,” she added. “Everyone wants to be done in one way or another.”

One telling moment came in late January, when Senate Majority Leader Mitch McConnell, a Republican, proposed a measure that warned Trump against a “precipitous withdrawal” from Syria or Afghanistan.

The Republican president, who has an isolationist streak, has made it clear he wants to withdraw U.S. troops from both countries as soon as feasible.

McConnell’s measure passed the Senate, but nearly every Democrat considering running for president in 2020 voted against it. Some accused McConnell of wanting to perpetuate a “forever war.”

The 2020 Democrats’ dissent was a reflection of the exhaustion with the Afghan war even among liberals who see themselves as champions of women’s rights.

Shaheen, who voted in favor of the McConnell measure and is up for re-election in 2020, acknowledged the political realities. On the women’s issue, “I think we need more support. It needs to be bipartisan,” she told POLITICO in a phone interview after her visit to Afghanistan.

As part of her campaign to keep the issue in the spotlight, Shaheen in early February wrote a letter, cosigned by fellow Democratic senators Bob Menendez and Patrick Leahy, that urged Pompeo to include and prioritize Afghan women in the peace talks.

In early April, Shaheen invited Roya Rahmani, Afghanistan’s ambassador to the U.S. — the first woman in that role — as her guest for NATO Secretary General Jens Stoltenberg’s speech to Congress.

Shaheen keeps reminding the administration that Trump in 2017 signed a bill, which she spearheaded, that commits the U.S. to bolstering women’s roles in resolving global conflicts. She further points to research that shows peace deals are more likely to succeed when women are involved in crafting them.

Shaheen, 72, told POLITICO that she plans to ask other lawmakers heading to Afghanistan in the coming months to make sure to meet with women while there to understand the progress they’ve made thanks in part to the U.S. presence.

“The culture in Afghanistan has changed in some ways, certainly in the cities,” she said.

Inside Afghanistan, women have mobilized to the extent that they can in a country where men still dominate the power structure. They have held conferences and protests demanding they get a seat at the table.

And there are some signs that their voices are being heard.

On Monday, some news organizations quoted a Taliban spokesman as saying the group’s delegation to “intra-Afghan” peace talks originally planned for this weekend would include women. But soon afterward the Taliban walked that back.

The Taliban representatives had been due to meet in Doha, Qatar, with a delegation of prominent Afghans, many of whom were expected to be women. The talks were scuttled at the last minute over several issues.

Such discussions, while important, nonetheless carry less weight than the direct talks that have taken place between the U.S. and the Taliban. The U.S. delegation is led by Zalmay Khalilzad, the Afghan-born former U.S. ambassador to Afghanistan.

In his talks with the Taliban, Khalilzad has focused primarily on security issues, including paving the way for an eventual U.S. troop withdrawal while convincing the Taliban to agree not to shelter terrorist groups.

But Khalilzad has insisted that no peace deal is final until the “intra-Afghan” portion is inked. That potentially could include a power-sharing deal between the Taliban and the current Afghan government, or at least pave the way for the Taliban to formally enter the political realm.

Khalilzad did not respond to a request for comment, but a State Department spokesperson noted that his team includes women, and that his deputy, Ambassador Molly Phee, has “led portions of the talks with the Taliban.”

The spokesperson also alluded to some leverage that the U.S. can wield down the line if the Taliban take political power in impoverished Afghanistan: international aid dollars. 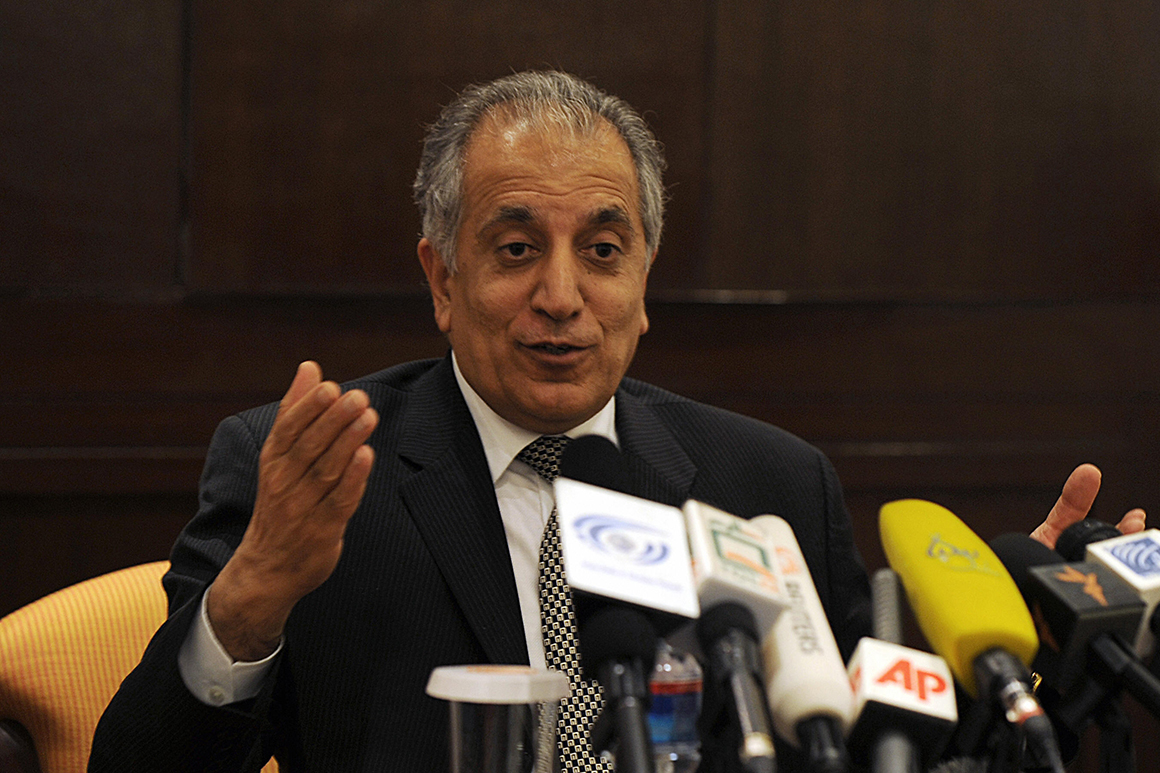 “We have made clear to Afghans that the success of our future bilateral relationship and Afghanistan’s relationship with the international community will rest in part on what it does to maintain civil rights of women,” the spokesperson said in a statement.

Khalilzad himself has assured women’s groups of his sympathies: “While #Afghans alone will decide the composition of their delegation for talks, #women must be at the table during all negotiations about #peace & #Afghanistan’s future,” he tweeted on April 1.

But Khalilzad and other U.S. officials have said little to suggest that Afghan women’s participation in the talks, or the safeguarding of their rights in the long-run, is of such importance that the U.S. would be willing to abandon a deal because of it.

Activists worry that non-committal statements from Khalilzad, Pompeo and others Trump aides will open the door to a deal in which women’s rights are embraced in words but not in reality. That’s all the more likely if Taliban leaders gain substantial political power and interpret Islamic law more severely than the current Afghan leadership.

When the Taliban ruled Afghanistan, before being ousted by the U.S. invasion in 2001, they forbid girls from going to school, barred women from working, and forced women to wear all-encompassing burqas outside the home. Women who disobeyed were severely punished.

In the years since the U.S. invasion, millions of Afghan girls have enrolled in school and many Afghan women have joined the workforce, especially in cities.

The debate over the peace talks today somewhat echoes concerns voiced during President Barack Obama’s tenure as he, too, tried with little success to engage in negotiations with the Taliban and get the U.S. out of Afghanistan.

At the time, Obama aides downplayed the issue of women’s rights, casting America’s primary geostrategic interest in the country as one of security and stability, not human rights.

That’s not unusual for any presidential administration’s view of any conflict. The U.S., after all, didn’t initially invade Afghanistan because of the Taliban’s brutality toward women. It invaded because the Taliban were sheltering 9/11 mastermind Osama bin Laden and his al-Qaida followers.

And if a peace deal fails, “we are not going to re-invade Afghanistan because of girls’ education,” said Jarrett Blanc, a former State Department official under Obama now with the Carnegie Endowment for International Peace.

Despite the lack of Afghan female voices at the negotiating table under Trump so far, many Afghan woman are hopeful about the overall arc of the talks.

They, too, are tired of the war that has threatened every Afghan, regardless of gender, and would rather there be some sort of a peace deal instead of a sudden U.S. withdrawal that could plunge the country into further chaos.

There also are signs that the Taliban are not monolithic in their views toward women. In some Taliban-controlled parts of Afghanistan now, girls are allowed to go to school.

That the Taliban even considered including women in their delegation in Doha may suggest the group, or at least some of its members, realizes how much the country has changed since the 1990s, according to some who track the subject.

“I think that this means the Taliban realize that they have to engage on the women’s issue, and more engagement is better than less engagement,” said Masuda Sultan, an Afghan-American board member of the group Women for Afghan Women.

Shaheen, too, noted that the Taliban, or at least some elements of the group, are more progressive than others.

But she still doesn’t trust them.

“That’s why any negotiation needs to be a conditions-based negotiation, where we don’t take them at their word,” she said.

Shaheen, who also serves on the Senate Armed Services Committee, further dismissed the idea of a complete U.S. troop withdrawal, especially if al-Qaida and the Islamic State terrorist groups continue to have a presence in Afghanistan.

“Any suggestion that we’re gonna totally move out without leaving any kind of a counterterrorism mission there from my perspective is not realistic,” she said.