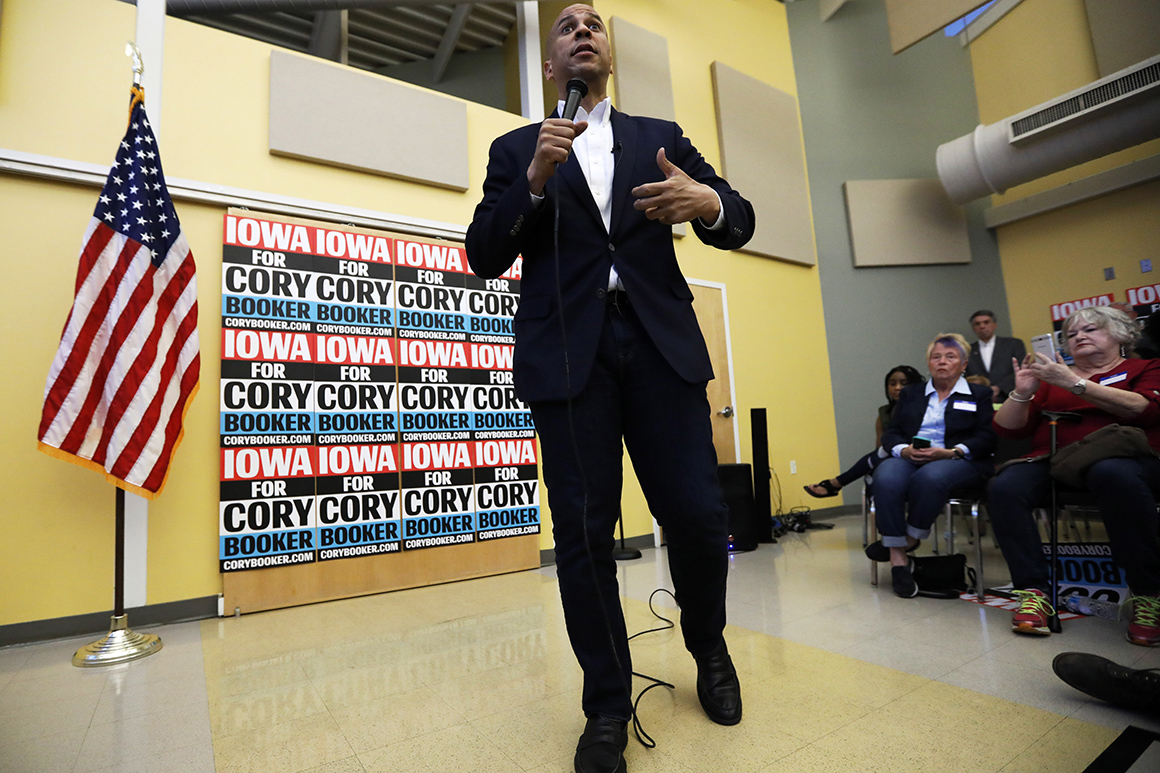 SIOUX CITY, IOWA — Sen. Cory Booker launched a bid for the White House in February on a message of love and unity, painting himself as an inspirational leader who would help a polarized America find common ground.

Polling in the single digits and lagging top-tier competitors in fundraising, Booker this week sought to reboot his campaign, launching a “Justice For All” two-week, national tour heavy on economic policy proposals and social justice messaging. In Iowa, he rolled out an expansive proposal for a new income tax credit and talked about the need for rural infrastructure investment. In Georgia, he unveiled a voting rights plan, vowing to make Election Day a national holiday and talked about restoring voting rights to ex-felons.

The recent steps aim to invigorate a presidential bid that has underwhelmed some Democrats who are questioning whether Booker’s message is one that resonates in the Trump era.

Booker kicked off his presidential bid on Feb. 1 framing his run on the proposition that the nation’s next leader needed to tap into ways to reunite an ever-divided country. Booker, who often references Martin Luther King Jr., is shaping his candidacy as one that seeks to bring back civic grace and discourse, saying that political tribalism in America runs so deep “we can’t even do the things that we agree on.”

“Right now what this country needs is not people having a race to the gutter, not a party that’s going to show the worst of who they are, not when they go low we go lower, not fighting fire with fire,” he said at a recent Iowa campaign stop.

It’s a tricky platform to execute, said Sean Bagniewski, chair of the Polk County Democrats. While he said Booker’s messaging is “compelling,” it comes at a political moment when the party is hungry for candidates to offer up evidence that they can defeat President Donald Trump.

“The Democratic base is angry as hell and we’re fighting for our lives,” Bagniewski said. “That’s how it feels every day. The primary voters are angry and they want to fight.”

At an Iowa town hall this week, one potential caucus-goer commented on Booker’s approach, telling him that “while we love your love message,” tackling issues like climate change “has to be our first priority.”

Even the senator acknowledged he’s been second-guessed on his messaging.

“‘That’s not a strategy to win, Cory. You’re fighting against Donald Trump. How you gonna to win?’” Booker said people will ask him. “And I say, ‘please, I’m the guy who beat this machine in Newark, New Jersey.’”

Booker told that Iowa crowd he believes the election has to be about something more than just ousting Trump from the White House.

“We have a choice in this election. To make it about one guy and one election and just get rid of him? I understand that call, but it’s got to be about something bigger than that,” Booker said. “We Democrats in this room, it can’t just be about beating Republicans, no. This is a moral moment in our country where it’s got to be about uniting Americans.”

A March Focus on Rural America poll in Iowa backs up Booker’s premise: 50 percent of those surveyed said it was “absolutely critical” that a 2020 candidate is “someone who can heal the racial, ethnic and partisan divide in our country.”

Still, as he moves into the second quarter of the most crowded and diverse Democratic presidential primary in history, Booker is finding that the skills he’s long tapped as an orator with a mayor’s flair for finding human connection so far hasn’t been enough to break through. On top of a slew of other U.S. senators in the race, fresh faces like former Texas Rep. Beto O’Rourke and South Bend Mayor Pete Buttigieg are deploying similar retail traits to dazzle prospective voters.

So far, according to polls, O’Rourke and Buttigieg have ranked above Booker, who also trails top tier candidates in the race including former Vice President Joe Biden, Sens. Bernie Sanders, Elizabeth Warren and Kamala Harris.

Booker’s first-quarter $5 million fundraising haul came in toward the low end of the expansive Democratic field and while his campaign says his polling numbers qualified him for the national debate stage, he’s trailing in the small-dollar fundraising contest that’s reflecting strength in many of his competitors’ campaigns.

With that in mind, Booker has shifted toward a more policy-heavy agenda in his two-week tour across the country that will take him to early presidential states and the South.

“We should be having the biggest increase in the Earned Income Tax Credit and that’s what I’m proposing, by making sure that anybody who works gets back from the government – if you’re earning more than $50,000 a year, or if you’re a couple, $90,000 a year — you will get a tax credit in this country,” he said. Then he gently jabbed at the crowd for failing to react. “And by the way, before you even applaud, let me tell you,” he said to laughter.

Even as Booker sought a recharge in Iowa, he was overshadowed by Buttigieg, whose unexpected surge drew among the biggest crowds for Democratic 2020 candidates touring the first-in-the-nation primary state.

“I think part of it is the newness factor. We have a lot of great candidates in the field who are pretty well known. Pete’s bubbled up because he’s new and different. But also his demeanor, he’s very chill, has a great sense of humor but he’s very knowledgeable,” said Vanessa Phelan, chair of Northwest Des Moines Democrats.

Phelan noted that while Buttigieg’s crowd was unexpectedly large, she’s seen many of the same people attending events for 2020 candidates as they’re still shopping around. Asked if Democrats wanted to hear Booker’s message of love and unity, she said they do – but that they want more.

“What we all just really want is for the presidency to change hands,” she said. “I think there is a space for that message but I just don’t know if it’s resonating.”