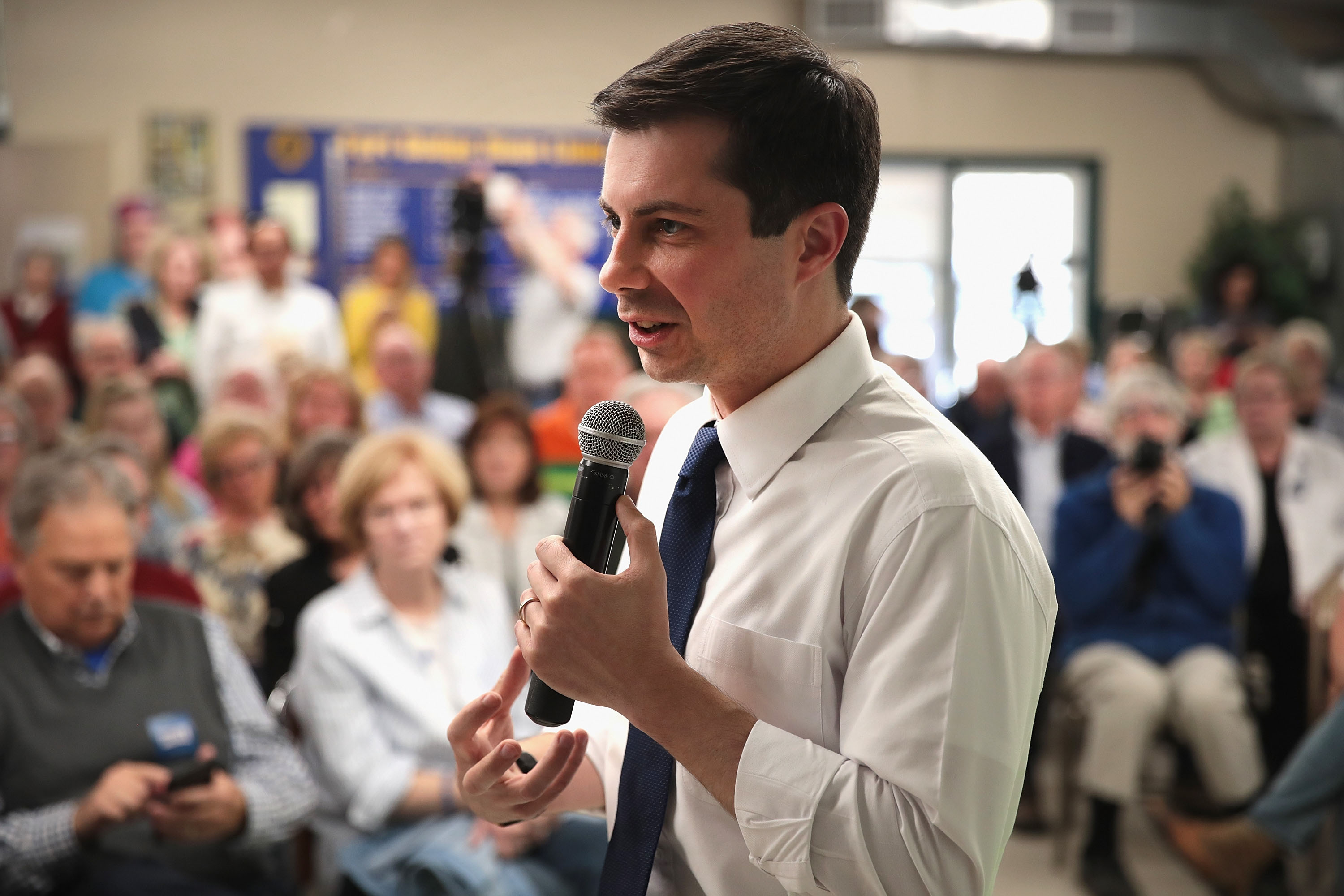 Burning with the velocity of a prairie fire on a gusty Indiana day, Pete Buttigieg scorched the airwaves, seared the podcasts, and charred the press this week as he ignited his presidential campaign, temporarily torching his Democratic competition in the process.

The secret to Buttigieg’s publicity run was no secret, wrote Matthew Yglesias in Vox. Like Molly Bloom in his favorite novel, Ulysses, he can’t stop saying “yes”—to media invitations. In recent weeks he’s appeared on a CNN town hall, Ellen, A list podcasts, and Morning Joe, and been featured in New York, Politico Magazine, the Atlantic, and much more. But saying yes is never enough to hold the press spellbound. Buttigieg has satisfied the ravenous press corps’ appetite by offering them an entire menu of newish things—no, make that entire food court of newish things—to write about. He’s the youngest candidate in the field (at 37 he’s the only millennial except Tulsi Gabbard), he’s gay and now married, he’s an Afghan war veteran, he’s a Rhodes scholar (as is Cory Booker, but never mind), he plays a decent piano, he’s a church-goer, he’s the mayor of the fourth largest city in Indiana, he once gave of a TEDx talk, he worked as a McKinsey consultant, he’s a polymath, he’s as earnest as a preacher, he’s an old person’s idea of what a young person should be like, and he’s figured out how to package progressive ideas as moderate.

The Buttigieg boom has also benefited from the stumbles of our previous political shooting star, Beto O’Rourke. Was it was only weeks ago that the press began swooning for O’Rourke like a drunken conventioneer, writing about him with the same frequency they do for Buttigieg today? The things that once seemed so appealing about O’Rourke to the press—the generalities, the platitudes, the off-handed charisma, the rolled up sleeves—seem off-putting now. The clearest sign of the press corps’ O’Rourke infatuation was their routine reference to him by his first name in their stories—something they’ve moved on to doing with Buttigieg. Such shameful and transparent familiarity.

Having stripped the Kennedyesque Texan of his novelty, the press corps has dumped him for the Kennedyesque Hoosier like a speed-dater on the rebound from a Tinder-relationship gone bad. Their transition to Buttigieg has been seamless, finding in him another candidate who speaks complete sentences, who likes the camera almost as much as it likes him, who subscribes to the usual Democratic articles of faith, and scans like a lost episode of The West Wing.

The fear of boredom plagues political reporters. Assigned to a well-known candidate, their first question is, “Haven’t we read this all before?” They crave novelty and newness, for the underexposed over the overexposed, and that prejudice gives relatively unknown candidates a leg up on established ones, especially in the early months of the campaign. Cory Booker and Elizabeth Warren, whom the press once treated as fresh, almost delectable personages a couple of years ago, are now dismissed as known, lackluster quantities.

A budding candidate like Buttigieg, on the other hand, gives reporters and editors a sense of discovery as they unearth the details from old lawsuits and busted business deals, gaffes preserved by C-SPAN, and tales from schoolmates. If a candidate’s personal history is ordinary, reporters can burn through it in a couple of weeks. But an extraordinary personal history like Buttigieg’s makes for an endlessly writeable event. Think of Buttigieg as a newborn just delivered to his newsroom parents, his every grin and wink and grimace worthy of endless analysis and discussion, and you begin to fathom the press corps’ fascination with him.

Candidates benefit from having some triumph over adversity in their resume. It can be as simple as getting shot down in enemy skies, suffering the premature loss of a loved one, or rising up from poverty. On this score, Buttigieg seems to have let the press corps down. He did come out of the closet at 33 on the op-ed page of the South Bend Tribune, but today deliberately soft-pedaled the event. Smoothed of the standard rough edges, Buttigieg’s life has a soft radiance to it, making him a bit of a walking miracle for journalists who’ve never encountered such a person.

The second and more cautionary problem is that after all these years we’ve failed to learn that media infatuations are rarely a good proxy for voter enthusiasm. National political reporters live in a bubble that extends from New York to Washington, which makes them better at taking a colleague’s pulse than a standard-issue voter’s. (Remember how the press went gaga for John McCain?) Reporters get stampeded into over-covering a new candidate because they don’t want to miss the boat. Voters, on the other hand, move more cautiously, often taking months or a year to sort out the candidates. Reporters are fickle. Voters are loyal.

Finally, whenever a national political reporter looks at the ambitious, conspicuously educated, ticket-punching, aggressively tame candidate Buttigieg, he can’t help but see himself. Think of their coverage as modest self-assessments.

Swoon for me via email to Shafer.Politico@gmail.com. My email alerts are offended by this column. My Twitter feed is waiting for Joe Biden. My RSS feed predicts that Buttigieg will become the Harold Stassen of modern politics.