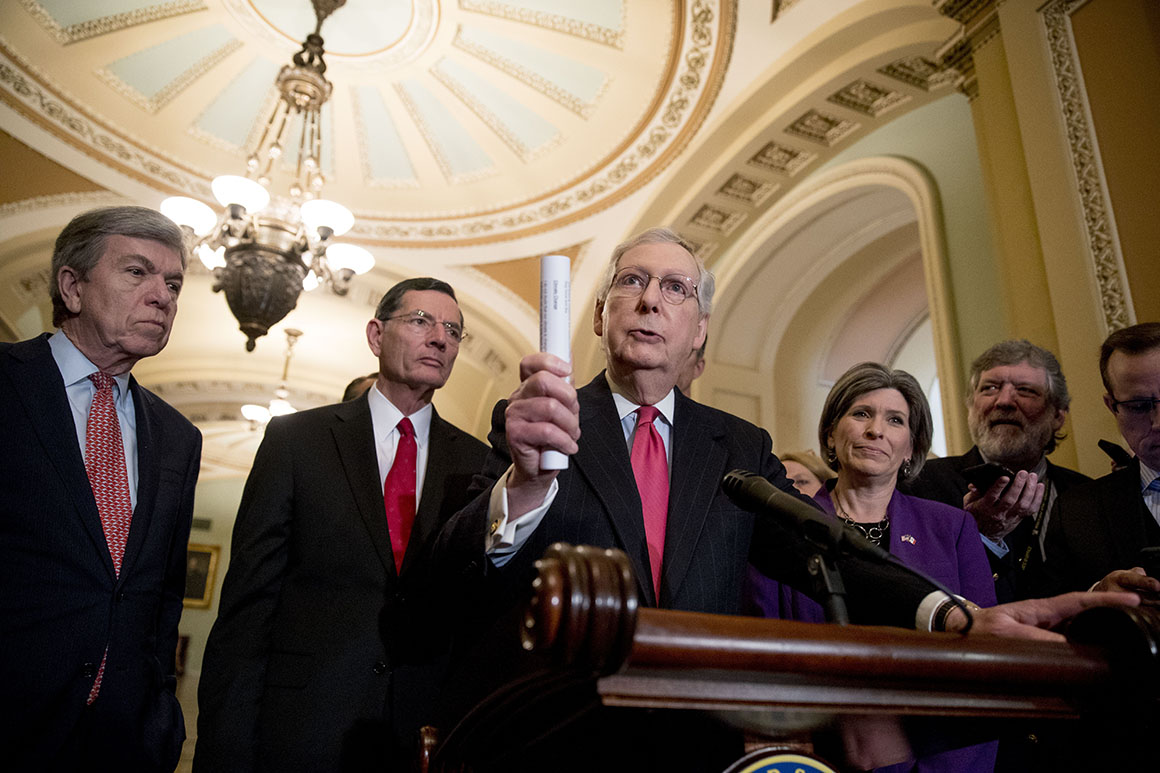 Senate Republicans — faced with a much tougher map than two years ago and an unpredictable political environment in a presidential year with Donald Trump at the top of their ticket — are stockpiling cash early to guard against losing their majority next year.

While the GOP is mostly on defense, the playing field is significantly narrower than it has been in previous cycles. Republicans are defending 22 seats, compared to just 12 for Democrats. But only two GOP seats are in states Trump lost in the last presidential election, and only a half-dozen GOP senators appear vulnerable at the outset of the cycle. Democrats need to net at least three seats to retake the majority — four if they lose the presidency again — leaving them clear paths to retake the chamber but little margin for error.

Every Senate Republican incumbent in a battleground race raised more than $1 million in the first quarter of the year, a benchmark number puts them in strong position at the outset of the cycle. Five incumbents up for reelection — Sens. John Cornyn of Texas, Cory Gardner of Colorado, Martha McSally of Arizona, Lindsey Graham of South Carolina and Majority Leader Mitch McConnell of Kentucky — topped $2 million in the first quarter.

After winning back control of the House last year, Democrats are turning toward the White House and Senate in 2020. Republicans, meanwhile, are stressing the importance of holding the chamber, which has driven Trump’s remaking of the federal judiciary over the past two years, including confirming two new Supreme Court justices.

Democrats acknowledge the strong fundraising quarter but see gaps they can exploit. They expected Gardner, who previously chaired Republicans’ campaign committee, and Sen. Thom Tillis of North Carolina, whose 2014 race was the most expensive in the country, to post higher totals. Gardner raised $2 million, and Tillis pulled in $1.2 million. Democrats expect to be competitive in both states.

Democrats have had early success, as well. Sen. Doug Jones of Alabama, the most vulnerable senator on the 2020 map from either party, has $3.1 million in the bank and can build a head of steam for his uphill reelection in the heavily red state while the Republican primary field remains unsettled. (His first GOP challenger, Rep. Bradley Byrne, has $2 million in the bank). Three other Democratic incumbents Republicans hope to target all hauled in more than $1 million: Sens. Gary Peters in Michigan ($1.9 million), Jeanne Shaheen in New Hampshire ($1.4 million) and Tina Smith in Minnesota ($1.1 million).

And Mark Kelly in Arizona, Democrats’ top recruit so far this cycle, raised $4.1 million, doubling McSally and ending the quarter with $1 million more in the bank than the appointed Republican incumbent. Republicans expected Kelly to post a massive first-quarter haul but are watching closely to see if he can sustain it in the next three months.

“Democrats are building an early advantage with grassroots support and enthusiasm that will outrun the special interests fueling Senate Republicans, who will need every cent they can get to try to defend their toxic records,” said Lauren Passalacqua, a spokesperson for the Democratic Senatorial Campaign Committee.

For Republicans, the plans for the Senate cycle are clear: Tie Democrats to their presidential contenders and try to force them left ahead of next fall. McConnell, speaking to reporters last week, framed the cycle as a “referendum on socialism.”

“We’re planning on running independent campaigns. And, if they take my advice, I think the best argument for us is [Democrats] are fundamentally trying to change America into something it’s never been,” McConnell said, citing the Green New Deal and Medicare for All. “If you want to make sure it doesn’t happen, you’ve got to elect a [Republican] Senate majority.”

Democrats, on the other hand, doubt Republicans will be able to run independent from Trump, and plan to tie incumbents to the president at every turn, particularly on health care. In Colorado, two new candidates entered the race against Gardner this week, and both tied him to Trump in their launch videos.

“By and large, this cycle is going to be a lot about whether they can get out from under Trump and there hasn’t been a lot that’s happened early on that suggests they will,” said Poersch, who leads the Democratic super PAC.

For now, the main thing missing for Democrats is candidates. Kelly is considered a top recruit in Arizona, and a slew of candidates in the primary to take on Gardner. But, so far, Democrats don’t have any top-tier candidates in Iowa, Maine, North Carolina or Georgia, where Stacey Abrams is still weighing a bid and is still being heavily recruited by Minority Leader Chuck Schumer (N.Y.) to run against GOP Sen. David Perdue, who raised $1.8 million in the first quarter.

In Texas, veteran MJ Hegar and Rep. Joaquín Castro are both considering running against Cornyn. But either candidate would face a steep fundraising gap with the incumbent, who has outraised every other incumbent senator from both parties and stockpiled $7.4 million — close to $3 million more than Ted Cruz, his Texas colleague, had at this point in 2017 before facing a surprisingly spirited and well-funded challenge from then-Rep. Beto O’Rourke.

Hegar, by contrast, has $37,000 leftover from her House campaign last year, while Castro has only $88,000 in the bank. Both would need massive fundraising success to catch up with Cornyn.

Democrats say it’s far too early to be concerned about recruitment. They have promising prospects in Iowa and Maine, and are still hopeful Abrams will turn Georgia into a top-tier race. The two candidates who flipped Republican seats last year, then-Reps. Jacky Rosen and Kyrsten Sinema, entered their races in July and September 2017, respectively. Gardner entered his own race in February of 2014, just months before the election.

“Unless you feel the need to clear the field, there’s not a lot of reasons to get in the race in January now,” said Sen. Chris Murphy (D-Conn.). “Because of online fundraising, because of the relatively small number of competitive races, you don’t need to put yourself out there as a target much more than a year ahead of time.”

Others, however, are hoping for more movement in the coming weeks. Celinda Lake, a Democratic consultant, described recruitment as “a lot of indecision” and said she thinks more candidates should enter races soon to build up the infrastructure to take advantage of the online fundraising.

“There are a lot of tactical reasons that would suggest you should get in earlier, not the least of which is building an online donor base,” Lake said.

Meanwhile, without opponents to bash, Republican incumbents are mostly focused on fundraising.

"Everybody’s taking it very seriously. I think one thing that’s different about this cycle and recent cycles has been the small-dollar contirbutions,” said Cornyn. He pointed to the $80 million O’Rourke raised in Texas last year to demonstrate that any opponent can catch fire quickly and make a race unexpectedly competitive.

“I think that’s a new dynamic we haven’t had to deal with before,” Cornyn said.

Even some Republicans in deep-red states are watching their backs. Graham, whose recent embrace of Trump shored up his GOP primary standing in South Carolina, raised $2.1 million and has $4.6 million in the bank.

Josh Holmes, a top adviser to Majority Leader Mitch McConnell, said there weren’t any blind spots where Republicans failed to hit their mark.

“I don’t see any evidence there’s anybody who had a terrible effort,” Holmes said.