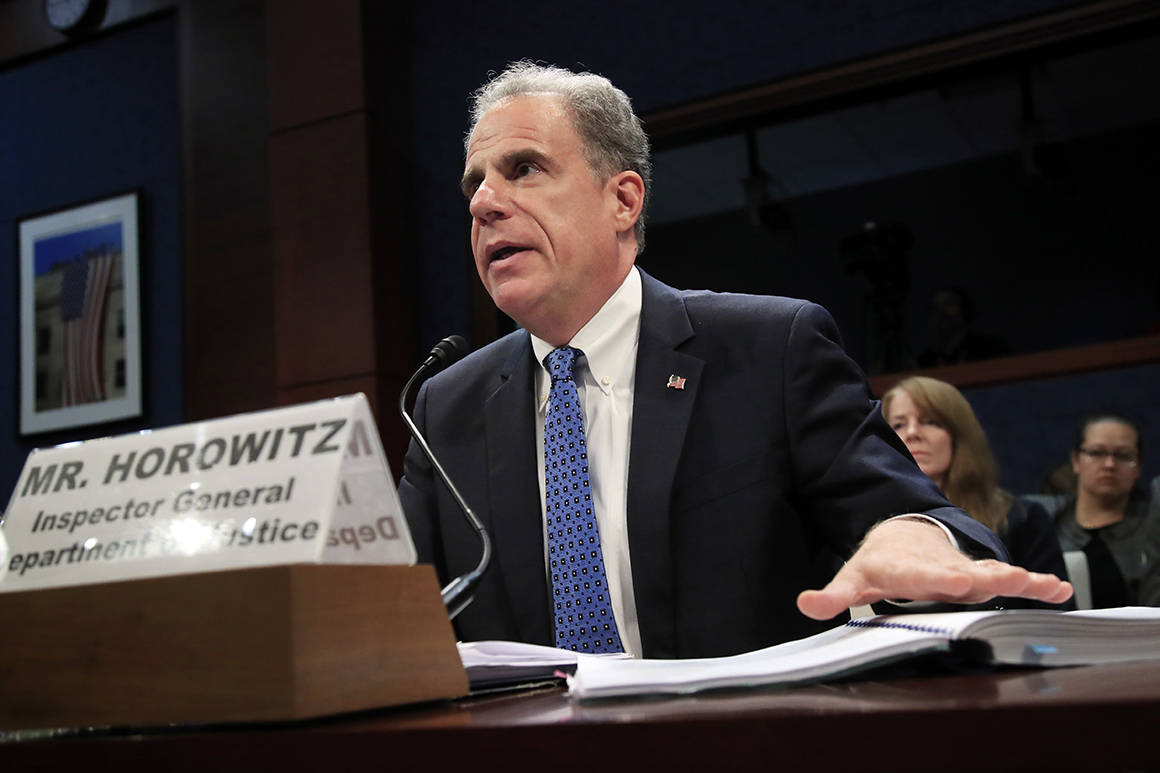 The frenzied anticipation around special counsel Robert Mueller’s full report has overshadowed another Justice Department report on the Russia probe that could land as soon as next month, and which will likely take direct aim at the former British spy behind an infamous “dossier” on President Donald Trump’s ties to Russia.

For the past year, the Justice Department’s inspector general, Michael Horowitz, has been examining the FBI’s efforts to surveil a one-time Trump campaign adviser based in part on information from Christopher Steele, a former British MI6 agent who had worked with the bureau as a confidential source since 2010.

Several people interviewed by the Inspector General’s office over the past year tell POLITICO that Horowitz’s team has been intensely focused on gauging Steele’s credibility as a source for the bureau. One former U.S. official left the interview with the impression that the Inspector General’s final report “is going to try and deeply undermine” Steele, who spent over two decades working Russia for MI6 before leaving to launch his own corporate intelligence firm.

Thursday’s planned release of the full Mueller report by the Justice Department could shed new light on Steele’s role, and the veracity of the controversial dossier he assembled in 2016, featuring explosive—and in some cases sexually lurid—charges of Kremlin influence over Trump and his associates.

And once the Mueller report is out, conservatives will look forward to the results of the Horowitz probe, launched in March 2018 while Jeff Sessions was attorney general. President Donald Trump had been calling for a parallel investigation into alleged FBI “spying” that would somehow undermine Mueller’s investigation.

Steele was hired by the opposition research firm Fusion GPS in 2016 to research Trump’s Russia ties, with funding from a law firm that represented the Democratic National Committee. He has become a villain to Trump allies who claim that anti-Trump Justice Department officials conspired to undo the results of the 2016 election, and conservatives have seized on Mueller’s conclusion that no criminal conspiracy existed between the Trump campaign and the Kremlin as evidence that Steele’s sensational dossier was a fraud.

Speaking on Fox News last month, Rep. Jim Jordan (R-Ohio), derided Steele as “the foreigner hired by the Clinton campaign to write the dossier that was the basis for this whole twisted deal.”

With his reputation on the line, Steele—who has not commented publicly on the Trump-Russia investigation—intends to rebut the Inspector General’s characterizations, if necessary, in the form of a rare public statement, according to people familiar with his plans. He declined to be interviewed by the inspector general, citing, among other things, the potential impropriety of his involvement in an internal Justice Department investigation as a foreign national and former British intelligence agent. Steele’s allies have also repeatedly noted that the dossier was not the original basis for the FBI’s probe into Trump and Russia.

A spokesman for the Inspector General’s office declined to comment.

The president and other critics of the Russia investigation have long maintained that the bureau inappropriately “spied” on the Trump campaign using unverified information provided by Steele. The FBI’s decision to seek a surveillance warrant against Trump campaign foreign policy adviser Carter Page—a warrant they applied for and obtained after Page had already left the campaign—is the chief focus of the probe by Horowitz, a Harvard-educated former federal prosecutor who has held his post since 2012.

Attorney General Bill Barr poured gasoline on those complaints last week, telling lawmakers that he believes “spying did occur” on the campaign in 2016. He also said that Horowitz’s report “will be complete in probably May or June, I am told,” and confirmed that he is conducting his own review, parallel to the inspector general, of the FBI’s conduct in 2016.

Trump has since seized upon Barr’s comments as evidence that the FBI acted improperly in 2016, even though Barr did not claim that the surveillance, approved and renewed by several federal judges, had violated any laws. “These were crimes committed by Crooked Hillary, the DNC, Dirty Cops and others!” Trump tweeted on Monday. “INVESTIGATE THE INVESTIGATORS”

Rep. Eric Swalwell (D-CA), a member of the House Intelligence and Judiciary Committees, dismissed the attacks on Steele, saying it would have concerned him more if the FBI did nothing with the information Steele gave them. “Knowing everything the FBI knew as the Russians were interfering in the election,” Swalwell said, “I would rather see them, out of abundance of caution, open an investigation and follow concerning leads than to just say ‘well this is probably nothing.’”

“I would want accountability if they didn’t do that,” he added.

The campaign adviser at the center of it all, Carter Page, had been on the FBI’s radar since 2013, when he interacted with undercover Russian intelligence agents in New York City. A trip to Moscow in the summer of 2016 further aroused the bureau’s suspicions about him, according to the Foreign Intelligence Surveillance Act (FISA) warrant the FBI submitted in October 2016, allowing the bureau to intercept his electronic communications.

Steele began providing the FBI with information about Trump’s alleged ties to Russia in 2016, but his relationship with the bureau began with soccer — a subject that has become an unexpected focus of the inspector general’s probe.

In 2010, Steele delivered information to the bureau’s Eurasian Organized Crime squad about corruption within the international soccer league FIFA, with links to Russia and its president, Vladimir Putin, that led to the ouster of longtime FIFA president Sepp Blatter and the indictment of several FIFA officials.

The inspector general’s office has concluded that Steele inflated his worth to the bureau in that case, and did little more than introduce agents to a journalist who had obtained hacked documents, according to two people who were interviewed and briefed on the matter. For the FBI to have formalized its relationship with Steele—paying him an undisclosed amount over beginning in 2013—as a result of his FIFA role may therefore have been bad judgment, the inspector general’s team has intimated. Horowitz’s probe also appears set to cast doubt on the veracity of the information Steele provided about Page that the FBI included in its application for a FISA warrant.

Steele, 54, went into hiding briefly after the dossier was published in January 2017 but has since returned to his regular “day job” in London at his firm, Orbis Business Intelligence. His defenders call him an intelligence professional with a sterling reputation who is being unfairly demonized by pro-Trump Republicans.

By 2015, however, as the FIFA investigation was ongoing, Steele was producing intelligence that appeared to rely not just on a single journalist but on high-level Russian insiders. One Steele report from June of that year, reviewed by POLITICO, cited both a senior Russian lawyer and “a close Russian confidante” of then-Deputy Prime Minister Dmitry Rogozin. The sources relayed that Russia was involved in bribing FIFA to win the 2018 World Cup, according to the report.

Steele’s defenders also note that the information he provided which made it into the FISA warrant application to monitor Page was not far off. According to Steele’s sources, Page met with high-level Russian officials while in Moscow in July 2016, including the CEO of Russia’s state-owned oil giant Rosneft. Page denied the claim publicly until pressed under oath by lawmakers in 2017, when he acknowledged meeting “senior members of the presidential administration” during his trip, as well as the head of investor relations at Rosneft. Page had originally claimed only that he went to Moscow to give the commencement address at the New Economic School.

Page told POLITICO on Tuesday that he has not been contacted by the Inspector General.

Former U.S. officials interviewed by the inspector general were skeptical about the quality of his probe. They emphasized to Horowitz that information in a warrant application need not be wholly verified, as long as the reliability of the source of the information is disclosed to the court, which the FBI did in the Page FISA case with regard to Steele. But the inspector general seemed neither well-versed in the FISA process nor receptive to the explanations, the officials said.

The inspector general is also homing in on Steele’s relationship with Bruce Ohr, a career Justice Department official who spent years investigating Russian organized crime and corruption and who has known Steele since 2007, according to two people familiar with their relationship. In July 2016, Steele told Ohr about the research he’d been doing on Trump’s alleged Russia ties, claiming among other things that a former head of the Russian Foreign Intelligence Service had stated that the spy service “had Donald Trump over a barrel,” Ohr told lawmakers in a closed-door interview last year.

Soon thereafter, the FBI began receiving Steele’s Trump-Russia memos directly. But the bureau cooled on the relationship after learning that Steele had described his Trump campaign research to reporters. (Two sources familiar with Steele’s actions insist that his research technically belonged to his clients, Fusion GPS and the Democratic National Committee, not to the FBI—so he had no obligation to keep it secret.)

Still, the Inspector General is apparently irked by Ohr’s decision to maintain contact with Steele after the bureau temporarily cut ties with the British operative in October 2016. Ohr told Congress that he felt it would be irresponsible not to hear Steele out. He also helped connect Steele with the special counsel’s office once it was up and running in May 2017, according to a person familiar with the matter. “When I receive information from Chris Steele I’m not going to sit on it,” Ohr told lawmakers. “I’ve got to give it to the FBI.”