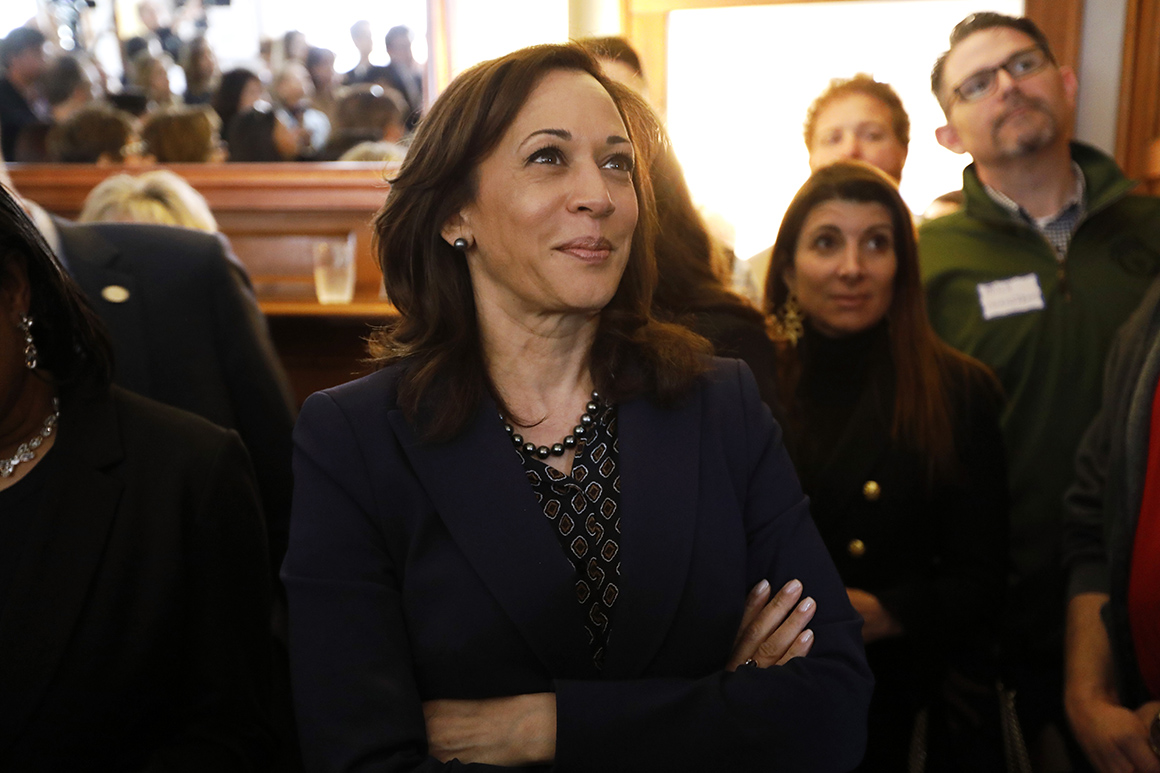 Hundreds of the biggest Democratic fundraisers in the last two presidential elections are already picking candidates for 2020 — and Kamala Harris has a significant early edge, while Pete Buttigieg and his from-scratch campaign has scrambled into the second tier.

Harris has already received donations from 176 people or couples who raised at least $100,000, and sometimes many multiples of that, for Hillary Clinton in 2016 or at least $50,000 for Barack Obama in 2012, according to a POLITICO analysis of new campaign finance disclosures and “bundler” data from the Center for Responsive Politics. While the Democratic presidential campaigns have been focused on building small-donor armies this year, bundlers mine their networks for checks to pass along to campaigns six- or seven-figures at a time, giving them a potentially massive role in a crowded primary.

Donations from these key fundraisers signals the out-of-the-gate interest the candidates are generating among many of the most wealthy and connected campaign supporters in the country. And while candidates have taken a more muted approach to raising checks from wealthy supporters this cycle as they seek to prove they have grassroots support online, they still benefit greatly big-donor support — and most are pursuing it seriously. Clinton and Obama’s bundlers raised hundreds of millions of dollars for their presidential campaigns, helped rally supporters to their cause, and participated in campaigns as surrogates and volunteers.

“It’s about whether you’re willing to get your hands dirty,” said Rufus Gifford, former finance director for Obama’s 2012 reelection campaign. “Writing the check is not good enough — [campaigns] need people to work their networks” to build a national machine of donors and volunteers to give them life, Gifford said.

Harris has received donations from more than twice as many top Democratic fundraisers as her next closest competitor, Cory Booker, who got donations from 80 Obama and Clinton bundlers in the first quarter, according to POLITICO’s review of campaign finance reports. The network helped Harris post the second-best fundraising total of any Democratic presidential candidate in the first quarter, $12 million — most of which came from donors who gave at least $200 each. Larger donors also accounted for more than 80 percent of the $5 million Booker raised early this year.

Kirsten Gillibrand (67 bundlers) and Amy Klobuchar (61) also picked up pieces of the Obama and Clinton networks. But the longtime senators were closely followed by a rising candidate, Buttigieg, who got backing from 51 bundlers despite having few fundraising connections before his campaign caught fire in March — prompting a wave of small donors to flock to his campaign, too.

Mel Heifetz, a Philadelphia-based real estate developer and philanthropist who raised money for Clinton’s campaign and donated $1 million each to super PACs supporting Obama and Clinton, donated to several candidates with whom he had existing relationships this year. Then Buttegieg caught his attention.

Heifetz received a call from Buttegieg’s husband, Chasten, after donating to the campaign and has now met with Pete Buttegieg as well. And Heifetz told POLITICO that he would spend $5 million to aid Buttegieg if he becomes the Democratic presidential nominee.

“The fact that he’s gay and is being accepted is unbelievable,” said Heifetz, who is himself gay and supports LGBTQ causes. “If it had been a straight candidate with his credentials and his background I would have supported him anyway.”

The field of experienced bundlers is still wide open for every candidate: Almost four-in-five of the Obama and Clinton fundraisers have yet to give any significant donations in the 2020 presidential race, partially because of candidates’ hesitancy to go all-out courting big money and partially because many donors want to bide their time before picking a candidate out of a crowded field. Some donors — including powerful fundraisers for Obama — are waiting to see if former Vice President Joe Biden decides to run before deciding where their loyalties lie.

While Buttegieg had built relationships with Democrats during his run for national party chair in 2017, he was still largely unknown to most Democratic donors prior to his surge in popularity this spring. His campaign is taking an “inclusive” model of reaching out to new and old party donors, campaign spokesperson Lis Smith said, encouraging donors to do outreach and fundraising of their own even if they haven’t done it before.

The donor support “tells you that people not only believe this is worth supporting, but that it has the staying power and seriousness that deserves that kind of investment,” Buttegieg said in an interview.

Some early bundler money is going in multiple directions. Minnesota businessman Bob Pohlad, who with his wife Michelle bundled money for both Obama and Clinton, donated to both Amy Klobuchar and Beto O’Rourke’s campaigns before giving money to Buttigieg.

In an interview, Pohlad said he did not know who Buttegieg was prior to his 2019 campaign and was initially impressed by his CNN town hall. He now plans to hold a small fundraiser for him during an upcoming visit to St. Paul.

Pohlad said he’s clear-eyed that Buttegieg is a somewhat improbable nominee — but he said he’s been taken in by his “message of inclusivity and reasonableness.”

“I could be his dad. I have kids Pete’s age,” Pohlad said. “But if he continues to be the way he has shown himself to be in terms of character, in terms of ideas and in terms of tone of approach, I will support him for as long as he’s in the race.”

Unlike Pohlad, a majority of fundraisers have yet to give a donation to any candidate.

POLITICO analyzed 1,924 individuals and couples whose names were on bundler lists released by the Clinton campaign in 2016 and the Obama campaign in 2012. Only 425 had made a donation to one or more candidates thus far in this presidential election cycle. The analysis included itemized donations of $200 or more that are recorded by the Federal Election Commission.

Harris, who has won statewide elections three times in California, home to many of the country’s most prolific donors, was well-positioned to seize support from many top fundraisers. Her campaign worked overtime to court wealthy supporters this spring, especially in California, at a moment when many Democrats are hesitant to be seen with rich backers.

“I’ll do anything I can do to help her campaign. She’s my number one,” said Kelly Dermody, a San Francisco-based employment lawyer who, spurred by concerns about Trump’s rise, raised more than $100,000 for Clinton in 2016. “I like where she’s going and what she stands for. If I’m able to take weekends away to do retail politics and roll up my sleeves, I will do that too.”

And fewer than half of the bundlers who gave to Harris — 81 of 176 — were based in California, according to campaign finance records, a sign her support extended beyond her home state.

Of the leading candidates for president, Bernie Sanders drew the least support from Clinton and Obama’s elite fundraisers: He received donations from only two of them — one fewer than self-help guru Marianne Williamson. Elizabeth Warren, who has sworn off closed-door fundraisers in the presidential primary, received donations from 18 people who raised big money for Clinton or Obama. 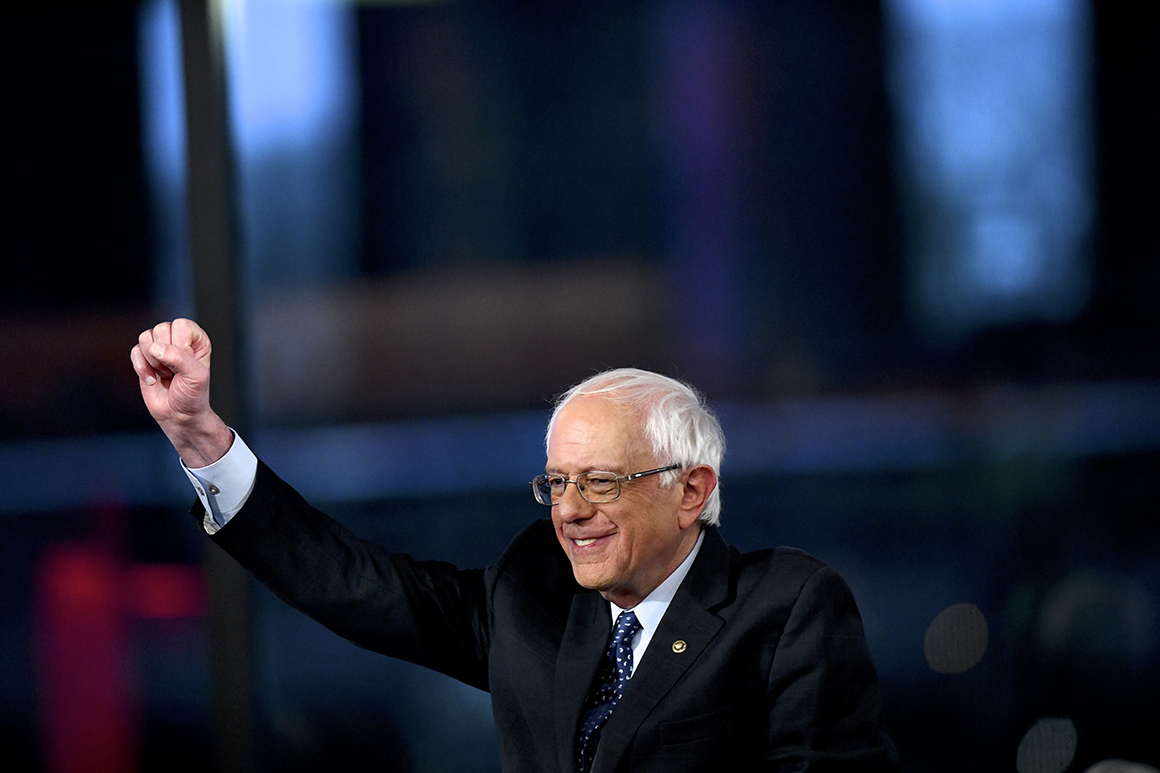 Former Colorado Gov. John Hickenlooper and Washington Gov. Jay Inslee each received support from 25 of the top Democratic fundraisers, while Beto O’Rourke — whose 2018 Texas Senate campaign was fueled by record online donations — had 38 bundlers on his first-quarter donor rolls.

In past years, some candidates publicized fundraisers and touted their bundlers alongside their grassroots supporters as signs they were running formidable campaigns. But fundraising among Democratic candidates for president has been muffled so far this year, as many Democrats try to prove their distance from special interests and wealthy donors, instead leaning on online small-dollar fundraising for support.

For many candidates, that approach may have its limits — which were reflected in the first-quarter fundraising reports, cautioned Gifford, Obama’s former finance director.

Obama raised $25 million from January through March of 2007, a bigger sum than any current candidate raised during the corresponding period this year. The money helped Obama gain status in the race as a serious contender. Sanders, who raised the most of any Democratic candidate in the field, still fell short of Obama’s total, raising $18 million during the first three months of 2019 — almost all of it from small donors giving online.

Michael Toner, former counsel to the Republican National Committee and multiple Republican presidential campaigns, predicted Democratic candidates will become more aggressive about big-dollar fundraising as they head into the summer primary debates and feel more pressure to prove they are top contenders — or to drop out.

“You have to raise enough money to compete in these caucuses, and you’ve got to have the resources to compete in a multi-front war,” Toner said. “It’s a necessary, but insufficient, condition in term of getting nominated.”