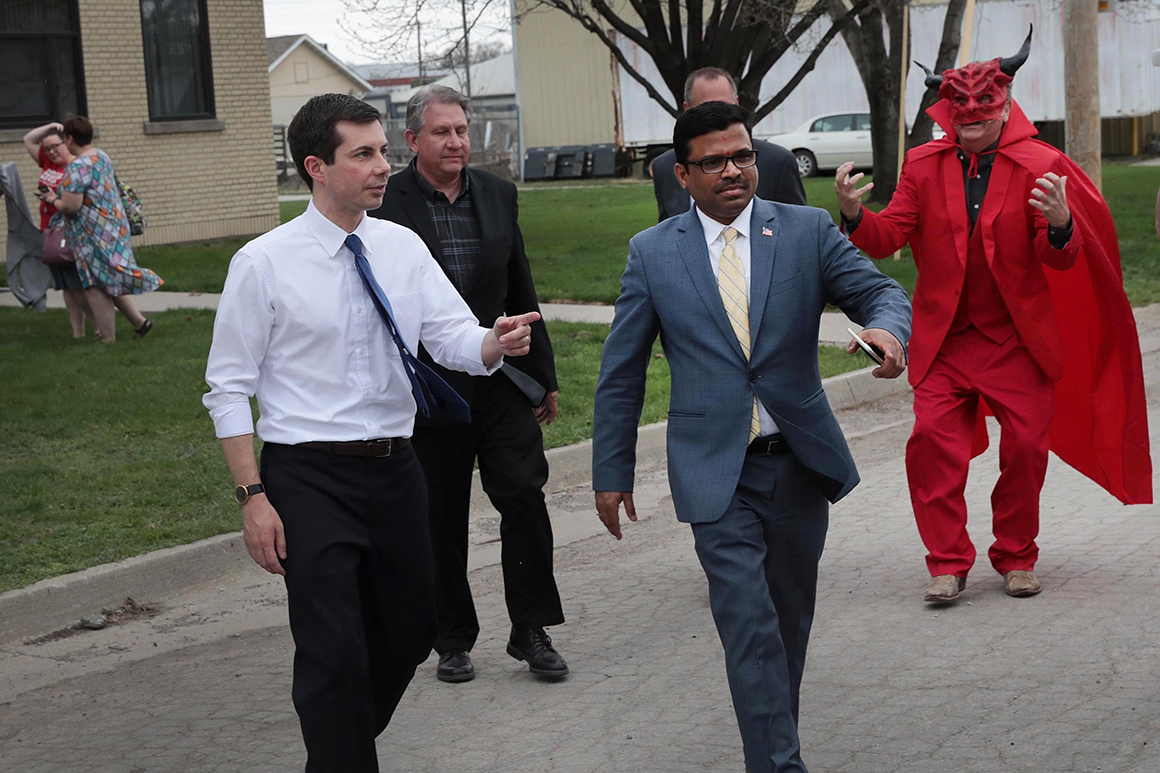 DES MOINES, Iowa — Pete Buttigieg is confronting another sign that his history-making candidacy is rising to the top tier of the Democratic presidential race: protesters.

A few anti-LGBT protesters, including religious activist Randall Terry, have interrupted the South Bend mayor, who is openly gay, at nearly all of his stops in Iowa this week — from a man shouting at him in a town hall in Dodge, Iowa to men dressed as a cross-carrying Jesus Christ and Satan outside of a meet-and-greet in Marshallville. At all three events, attendees ignored or shouted them down with chants of “Pete” and “USA.”

Buttigieg, who formally launched his presidential run last weekend, took the attacks in stride, telling the 1,600-person crowd in Des Moines Tuesday night that the “condition of my soul is in the hands of God, but the Iowa caucuses are up to you.” And those standing-room-only crowds — spilling out of union halls and into backyards — are not only a marker of Buttigieg’s viral appeal in the early caucus state, but emblematic of the historic nature of his campaign.

“It felt like the crowd got defensive for him, when most of the people here probably aren’t yet decided on just supporting Pete,” Bagniewski said. “Those protesters probably helped him get more supporters.”

Dealing with anti-gay demonstrations is “part of the good, bad, ugly and odd that can come out,” Buttigieg told POLITICO in an interview, noting that he’s dealt with protesters before but “the costumes were new” to him. “There’s always going to be stuff like this when you become a top-tier contender, and we need to be prepared to manage that sort of thing.”

In recent weeks, Buttigieg has broken out of the 2020 pack with a series of viral moments, followed by a $7 million fundraising haul and a steady creep up the national polls, where he’s now competing with several other Democrats for third place behind former Vice President Joe Biden and Sen. Bernie Sanders. Buttigieg pitches himself as a millennial, Midwestern mayor from Trump country focused on generational change.

But he’s also talked about his struggle with coming out as a gay man at 33, explaining to MSNBC’s Rachel Maddow this week that “there’s this war that breaks out, I think, inside a lot of people when they realize they might be something they’re afraid of.”

Buttigieg’s candidacy measures the distance American voters have traveled on LGBT rights. Just over a decade ago, none of the top three 2008 Democratic primary presidential candidates supported same-sex marriage. In 2006, 43 percent of Americans said they would feel enthusiastic or comfortable about a candidate who was gay or lesbian. In April, 70 percent said they’d be enthusiastic or comfortable in a new NBC/Wall Street Journal poll.

But there’s little public data on how voters feel about voting for a gay or lesbian president in individual battleground states, where Democrats must make inroads to retake the White House in 2020.

“Are people much more comfortable with a LGBT candidate, even in the Rust Belt, then they were five to 10 years ago? No question,” said a Democratic pollster, who was granted anonymity to discuss the issue candidly. “But will they vote for a male candidate with a husband in those states? We don’t know that yet.”

That possibility worries Jeanette Melhuish, a 61-year-old Democrat who saw Buttigieg in Marshalltown on Wednesday morning, because “there are some older Democrats and older Independents that won’t vote for him” for “the fact that he’s gay,” she said. “I see that as his biggest obstacle, but I hope he overcomes it.”

When asked at the Des Moines rally about what supporters should tell friends who “don’t think America is ready for a gay president,” Buttigieg quipped, “Tell your friends I say ‘hi.’”

Buttigieg said he would look to replicate what he did in Indiana, when he asked “people to evaluate me for the job I was going to do and for the whole of who I am,” he said in an interview. Buttigieg came out during his 2015 reelection race for mayor, writing that it “took years of struggle and growth for me to recognize” that being gay is “just a fact of life, like having brown hair, and part of who I am.”

“That’s all I can ask anyone to do, and it worked well in a socially conservative community,” Buttigieg said. “If we can do it there, we can do it anywhere.”

Matt McCoy, a Polk County supervisor who was the first openly gay state senator to serve in Iowa, watched the heckling on Tuesday night with surprise because “we’re so beyond that,” he said. But McCoy said that if Buttigieg uses the same approach that he did in Indiana, “he will be absolutely fine” in Iowa.

“You just talk about it, and you just don’t duck it,” McCoy said. “You do exactly what he’s doing.”

“Part of his appeal is how he deals with it — talking about it in the context of faith with no squeamishness,” said Steve Elmendorf, a Democratic donor who has supported Buttigieg. “He’s very comfortable with himself and that transcends him being LGBT.”

Strategists warned, however, that there’s a risk in wrapping his candidacy too heavily in his own identity.

“To the extent that he has to talk about himself and not voters, it can be a distraction,” said a second Democratic pollster. “But, right now, he’s become the poignant recipient of this hate, and that’s going to engender compassion and people may be more likely to check him out.”

For some voters, Buttigieg’s presence and rise in the 2020 primary has less to do with politics and more to do with role models. Lori Bell, a teacher at Fort Dodge Middle School, brought students from the school’s Gay-Straight Alliance club to see Buttigieg, so they could “see that people like them, who have gone through the same experiences they’ve gone through, can run for office,” Bell said. “That it’s different than what it was like when [Buttigieg] was a kid.”

Bell hasn’t committed to Buttigieg yet, “but I’m leaning his way now,” she said.