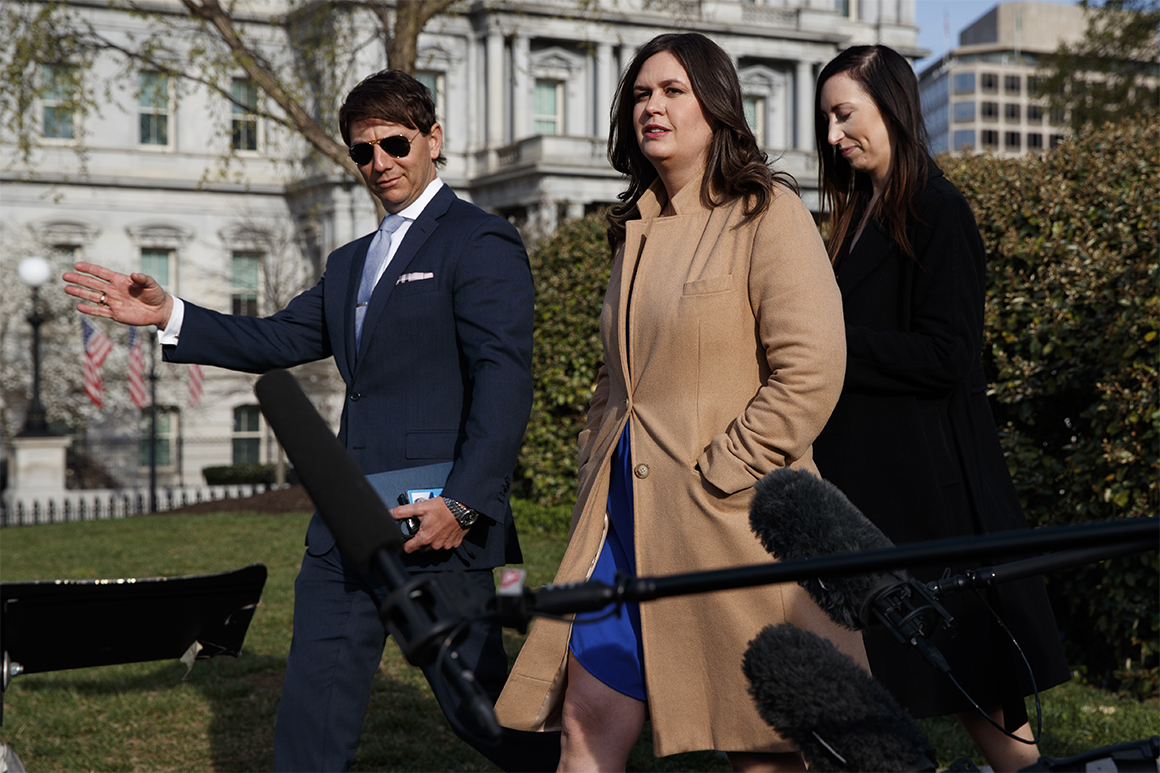 President Donald Trump’s proposal to release detained undocumented immigrants into so-called sanctuary cities, categorically dismissed by the administration days ago, inched closer to reality on Sunday, with White House officials confirming that the controversial plan was back under consideration and urging immediate action in response to a surge of Central American migrants at the southern border.

White House press secretary Sarah Huckabee Sanders said the administration was “looking to see if there are options that make” Trump’s proposal legally viable, and described it as “an option on the table” among other immigration enforcement measures.

“Certainly this wouldn’t be our first choice, because ideally we wouldn’t be dealing with the massive influx of illegal immigrants coming across the border,” Sanders told host George Stephanopoulos on ABC’s “This Week.”

“The president likes the idea, and Democrats have said they want these individuals into their communities,” she said. “So let’s see if it works and everybody gets a win out of it.”

Sanders’ acknowledgment that administration officials are revisiting the proposal follows denials from The White House and Department of Homeland Security to The Washington Post late last week that the idea was still under discussion.

But Trump on Friday contradicted his top aides and agency personnel by revealing that he was “strongly looking at” the plan, which Sanders on Sunday contended would “spread out” the “burden” of undocumented immigrants across the U.S.

“We don’t want to put all of the burden on one or two border communities, and Democrats have stated time and time again they support open borders, they support sanctuary cities,” Sanders said.

“So let’s spread out some of that burden and let’s put it in some of those other locations, if that’s what they want to see happen and are refusing to actually help fix the problem,” she added.

Sanders’ statement about sharing the “burden” of undocumented immigrants recalled the March 1964 proposal of Sen. Richard Russell (D-Ga.) to relocate African-Americans so that so much of the population was not concentrated in the Deep South. In arguing against integration in his region of the United States, Russell said: “It is only fair and right that the Negro population be spread more evenly over all sections of the nation.”

The president on Saturday evening dug in on his policy suggestion, writing on Twitter that the U.S. government had the “absolute legal right” to transport apprehended migrants to jurisdictions that limit local cooperation with federal immigration enforcement agents. It is not clear that is the case.

“We hereby demand that they be taken care of at the highest level, especially by the State of California, which is well known or its poor management & high taxes!” Trump wrote online.

Administration officials proposed the plan last November and again in February, according to The Post, as a form of political retaliation against the president’s opponents. Democratic bastions including House Speaker Nancy Pelosi’s district in San Francisco were among the targets.

While overall arrests remain below the high levels of the 1980s, 1990s and early 2000s, the number of family members intercepted at the southwest border soared in March, according to preliminary statistics from U.S. Customs and Border Protection — presenting the administration with what officials argue are unique challenges.

White House counselor Kellyanne Conway said Sunday that the onus lay with Pelosi’s caucus in the House to legislate a solution to “both a security crisis and a humanitarian crisis” at the U.S.-Mexico border, adding that “we’ve done a great deal of work” in Trump’s executive branch.

“We have an unserious Congress that is not coming to the table,” Conway told host Chuck Todd on NBC’s “Meet the Press.”

“And the Republicans failed to do their job when they were in charge, no doubt. The Democrats now are failing to come together in the House," she said.

But Rep. Bennie Thompson (D-Miss.), chairman of the House Homeland Security Committee, said Sunday that little progress could be made on any immigration compromise with the White House given the number of high-level vacancies at DHS that resulted from the president’s purge of several department officials last week.

“We’re kind of in a rudderless situation,” Thompson said on ABC.

“The individuals tasked with the responsibility of carrying forth the administration’s policy, they’re just not soundly in place for this to occur,” he added.

Kirstjen Nielsen resigned as homeland security secretary last Sunday, following the White House’s unexpected decision to pull its nomination of Ronald Vitiello to become director of Immigration and Customs Enforcement. Claire Grady, the acting Homeland Security Department deputy secretary, also departed the administration on Tuesday — another casualty of an administration exodus engineered in part by Stephen Miller, the White House adviser who is the president’s top aide on matters of immigration.

It was Miller, too, who was responsible for engendering Trump’s proposal on sanctuary cities, Rep. Jerrold Nadler (D-N.Y.), the chairman of the House Judiciary Committee, asserted on Sunday.

“We heard several weeks ago from whistle-blowers that Steve Miller came up with this before we heard about it from any other source,” Nadler told host Jake Tapper on CNN’s “State of the Union.”

“Probably Steve Miller, who seems to be the boss of everybody on immigration, ought to come before Congress and explain some of these policies,” Nadler said.