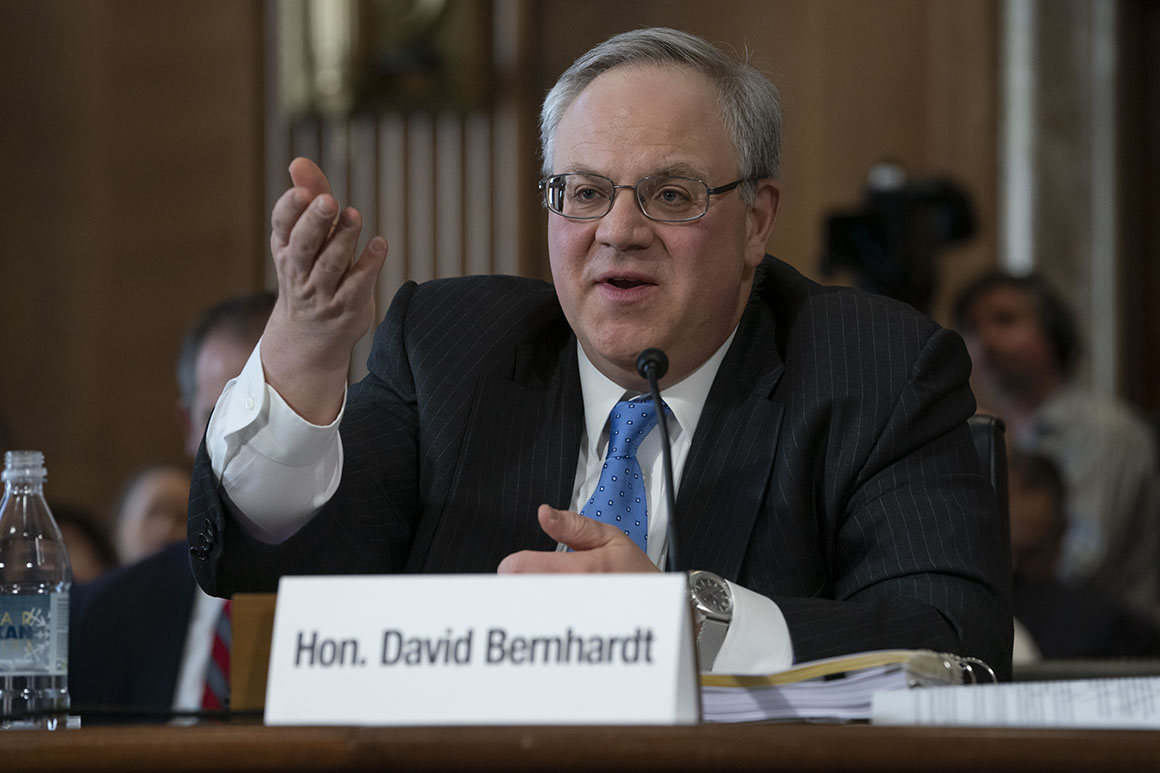 The National Archives and Records Administration gave the Interior Department until late April to address Democrats’ allegations that newly confirmed Secretary David Bernhardt may have been destroying his official calendars, according to a letter POLITICO obtained Friday.

The letter adds new pressure to a department that is facing investigations by House Democrats who question whether Bernhardt has violated federal record-keeping laws. Bernhardt’s existing daily schedule shows that the former fossil fuel and agriculture lobbyist has met with representatives of former clients who stood to gain from Interior’s decisions, but the department has released few details about his activities during about one-third of his days in office.

House Oversight Chairman Elijah Cummings (D-Md.) requested the NARA probe after Bernhardt acknowledged he does not keep a daily calendar and failed to disclose meetings with industry groups such as the American Petroleum Institute.

"This record raises questions about whether all of the Acting Secretary’s meetings are being captured and preserved in accordance with DOI’s record schedules," Cummings wrote in a previously undisclosed March 19 letter to NARA.

In a letter to Cummings dated April 1, NARA Chief Records Officer Laurence Brewer wrote that he had given Interior 30 days to respond to questions about “the alleged unauthorized disposition of Acting Secretary Bernhardt’s calendar records.”

Interior maintained in a letter to NARA on March 27 that it “is and at all times has been fully compliant with federal records laws.” NARA did not respond to questions about whether that put an end to its investigation.

The Senate confirmed Bernhardt as Interior secretary by a 56-41 vote Thursday, overriding Democrats’ questions about his ethics.

Interior earlier this month quietly released hundreds of daily reports that Bernhardt aides produced to list his meetings for most of his days as a top department official. Those schedules — which Interior calls "cards" — offer far greater detail than its previously released calendars for Bernhardt.

They reveal that Bernhardt, who was then deputy secretary, gave the keynote address last year at a gathering of oil and gas executives at the Trump International Hotel and was scheduled to dine with the board of oil company BP, among other meetings that had not been previously disclosed. Interior says he didn’t make it to the BP dinner.

But the picture is incomplete — details about whom Bernhardt met with or what he was working on are still missing for 133 of the 374 work days between when he started as deputy secretary in August 2017 and this past Jan. 31, the last day for which the daily cards are available. An analysis by the Center for Western Priorities, a conservation group critical of the Trump administration’s policies, could not turn up such details for those days in either the newly released cards or the official calendar Interior have been made public.

"It shows whatever they were talking about in being transparent is a joke," center spokesperson Aaron Weiss said. "There’s no transparency if you’re still holding at least 15 work weeks’ worth of when you were in the office."

Interior said that on the days without scheduling cards “the cards simply were not made.”

“This may have occurred because he was on travel, the person who created the cards was out sick, human error, etc.,” the spokesperson told POLITICO.

Meanwhile, a number of Democratic lawmakers and outside groups are seeking investigations of whether Bernhardt violated federal lobbying laws by continuing to work for clients after formally deregistering as a lobbyist.

Fifteen of the days left unaccounted for in the daily cards fell during the two months when Bernhardt was working on a controversial plan for maximizing water deliveries from the ecologically sensitive Bay-Delta water hub to California farmers, which included a powerful agriculture group he represented as a lobbyist for five years.

Then-Interior Secretary Ryan Zinke tasked Bernhardt with developing the plan in a memo dated Aug. 17, 2018, just days after an ethics agreement barring Bernhardt from working with a former client, Westlands Water District, expired. That plan turned into a presidential memorandum on Western water that President Donald Trump signed on Oct. 19, 2018 — which environmental groups say runs roughshod over the environmental protections that Westlands has long fought against.

But whom exactly Bernhardt consulted with during the period when he crafted the plan remains unclear, although the calendars show that he had multiple meetings on California water issues, even before his recusal expired.

Several days for which detailed cards are missing were ones Bernhardt spent on travel in California, according to his official calendar, which also includes no details about his meetings and activities during that trip. The Interior spokeswoman said four of the days were personal vacation days, although the official calendar lists some work calls on those days.

Bernhardt is already facing ethics inquiries since evidence came to light showing that he continued working to advance Westlands’ interests even after deregistering as the group’s lobbyist.

The House Oversight and Natural Resources committees requested interviews in March with four Interior officials to discuss allegations that the department had been destroying Bernhardt’s schedule at the end of each workday.

In a letter Wednesday — one day after Jordan wrote to Bernhardt criticizing the Democrats’ probe — an Interior official said the department had already sent 27,000 pages of documents to the committees. But the official stopped short of committing to an interview.

“Having produced a large volume of documents for this matter … we believe it is important to understand any remaining questions you might have as we continue to work to respond to your information needs while protecting important Executive Branch institutional interests,” wrote Cole Rojewski, Interior’s director of congressional and legislative affairs.

The schedule cards Interior released this month show Bernhardt had more meetings than previously known with fossil fuel and agricultural companies that have issues pending before Interior. The records show he met with executives from ConocoPhillips, Chevron and other energy companies two dozen times during the roughly year and a half he was deputy secretary. During the same period, his schedule shows fewer than half a dozen meetings with conservation groups.

That contrasts with just a one-week period shortly after he was sworn in as deputy secretary in August 2017, in which Bernhardt met privately with Jack Gerard, then head of the American Petroleum Institute; spoke at a meeting of the U.S. Chamber of Commerce’s energy division; and met with ExxonMobil, according to the schedules.

The week after those meetings, Bernhardt met with Interior officials to discuss a new offshore oil and gas lease program, the schedule shows.

On May 23, 2018, Bernhardt was scheduled to meet with representatives of Denver-based oil and gas company Cimarex Energy. The company’s chief executive, Thomas Jorden, sits on the board of the Independent Petroleum Association of America, a group that Bernhardt used to represent and which has boasted of its access to him.

Seven days later, Bernhardt met in his office with the vice president in charge of production in the Gulf of Mexico for oil company Shell. Interior had proposed a major rollback of safety regulations for offshore oil rigs weeks earlier, and was in the process of forming a new offshore oil lease plan that could open up waters where Shell and other companies had been interested in drilling.

Among the topics Shell wanted to discuss were “seismic permitting in the Atlantic” and “the ability of the U.S. offshore to compete with aggressive leasing programs in nations such as Brazil and Mexico,” an Interior spokesperson said. Interior’s ethics officials had approved Bernhardt’s attending the meeting, the spokesperson added.

The following week he met with Roger Kelley, an executive with the Domestic Energy Producers Alliance, a group formed by Trump supporter Harold Hamm. Bernhardt had met Kelley months earlier when Kelley visited Interior in his role as an executive with Hamm’s Continental Resources. Interior’s ethics office cleared the meetings, the department spokesperson said.

The period was capped off with Bernhardt meeting with the API on July 17 and then delivering the keynote address at the Domestic Energy Producers Alliance event held the same night at the Trump hotel.

Bernhardt also was scheduled to dine with BP board members on Sept. 26, 2018. He did not attend the dinner, an Interior spokesperson said. But two days later, Bernhardt’s schedule included a briefing on the offshore safety rules that Interior was in the process of rolling back.