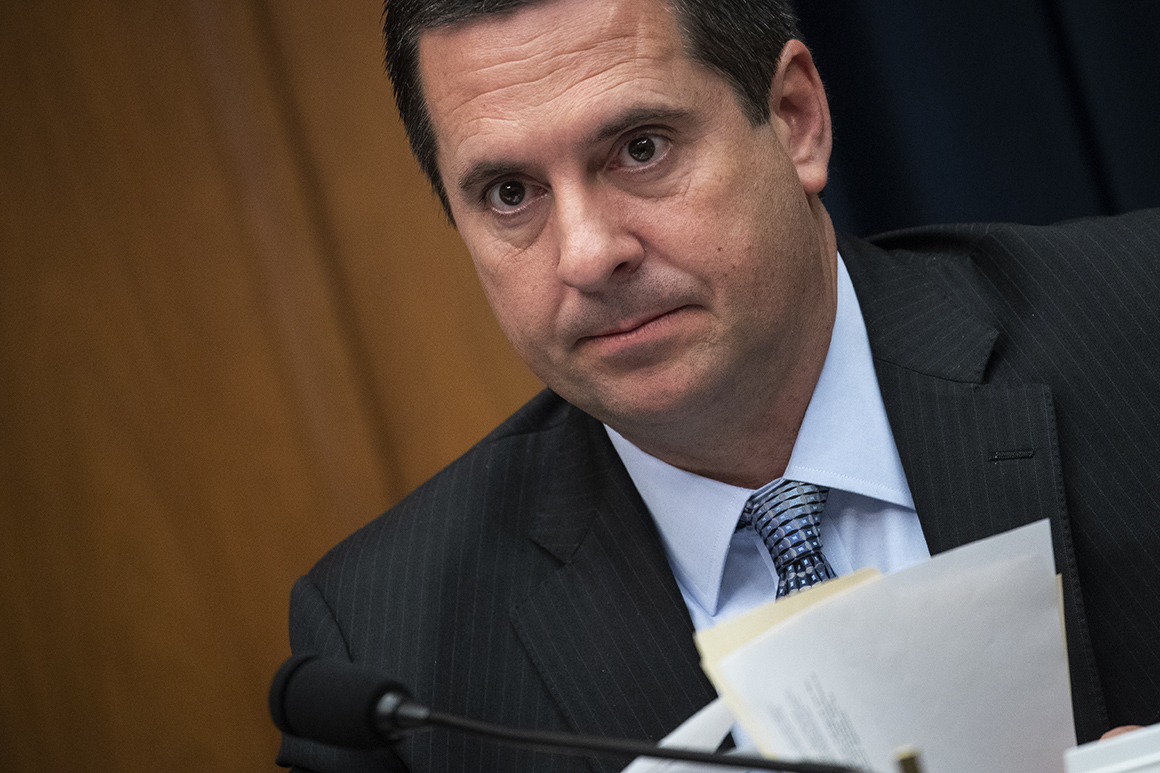 House Democrats are crying foul over a plan by the Intelligence Committee’s top Republican, Rep. Devin Nunes, to meet privately with Attorney General William Barr to push the Justice Department to pursue criminal charges against officials involved in the investigation of President Donald Trump’s 2016 campaign and Russia.

Nunes’ accusations of misconduct are aimed at a slew of former FBI and Justice Department officials, who he alleges committed crimes in their pursuit of allegations that President Donald Trump’s 2016 campaign conspired with Russians to influence the election.

Nunes has in recent days foreshadowed plans to send eight "criminal referrals" — informal requests for the Justice Department to investigate — directly to Barr. He said on Sean Hannity’s Fox News show Thursday night that he intends to meet with Barr "when appropriate" to discuss the referrals, and plans to bring fellow GOP intelligence committee member John Ratcliffe, a former U.S. attorney, to the meeting. Nunes said he wouldn’t name the targeted officials publicly but would share his recommendations with Barr.

Barr told lawmakers earlier this week that he was anticipating Nunes’ information.

"I haven’t seen the referrals yet from Congressman Nunes," Barr said during testimony to the House Appropriations Committee on Tuesday, "but obviously if there’s a predicate for an investigation it’ll be conducted.”

Nunes’ move is an escalation by Trump’s allies in Congress to pivot from Mueller’s still-unreleased findings to the conduct of the FBI and Justice Department investigators who initiated the Russia probe. Before seeing its contents, Nunes labeled Mueller’s report a "partisan document" and said "we can just burn it up," even as most of Trump’s supporters were celebrating the news — as described publicly by Barr — that Mueller "did not establish" a conspiracy between the campaign and the Russian government.

The Justice Department declined multiple inquiries about whether Barr intends to meet with Nunes and Ratcliffe. Nunes and Ratcliffe also declined requests for comment. Democrats says such a meeting would be a significant break from protocol unless they are also included.

“We expect to learn more if and when the Department of Justice receives the referrals, assuming the Department follows appropriate protocol and Barr holds any such meeting only with representatives of the majority and minority present," said a Democratic aide to the House intelligence committee.

A decision by Barr to meet alone with Nunes and Ratcliffe would further strain Barr’s relationship with Capitol Hill Democrats, who have ripped the new attorney general in recent weeks for what they say is his efforts to shield Trump from potentially damaging findings in Mueller’s report, which Barr has been reviewing for nearly a month.

Their frustration was inflamed anew this week when Barr told the Senate Appropriations Committee that he believed federal authorities spied on Trump’s campaign in 2016, a disputed premise that supported Trump’s inflammatory rhetoric about the Russia probe.

The intelligence committee aide emphasized that Nunes had yet to share any details of his referrals with Chairman Adam Schiff (D-Calif.) or other members of the Democratic majority.

"[B]ut it is clear they believe they now have an ally in the attorney general to perpetuate their conspiracy theories of ‘spying’ and their determination to investigate the investigators, no matter how misguided and damaging their efforts are to our national institutions, or the dedicated public servants who work to keep us safe," the aide said.

A senior House Democratic aide said Barr "must refuse the meeting and start down a path of redeeming his credibility," especially as he prepares to issue a redacted version of Mueller’s final report.

The issue also arises as House Republicans on another committee sent the Justice Department another criminal referral — this one for Trump’s former personal lawyer Michael Cohen. Reps. Jim Jordan (R-Ohio) and Mark Meadows (R-N.C.), two of Trump’s closest allies in Congress, sent their own referral to the Justice Department for Trump’s former personal attorney Michael Cohen, who they accused of lying to the committee during testimony last month.

Criminal referrals are ill-defined requests for investigation that don’t carry any official weight with prosecutors, except in rare circumstances. Officials on various House investigative committees described the process as a loose, informal request that prosecutors typically treat as glorified press releases. They only matter, committee officials emphasized, if lawmakers have exclusive evidence to back it up — such as a confidential interview transcript or documents obtained during a congressional investigation.

Apart from this unwritten process, the House has no formal mechanism to refer anyone for criminal investigation except through a contempt proceeding, which would require a vote of the full chamber.

Nunes’ referrals appear to rely on information already in the Justice Department’s possession. He told Hannity that five of his eight referrals will name individuals he says committed "serious misconduct in the Trump-Russia probe." He said one referral would be for a "global leaks" investigation and would name "a few reporters" — though it’s unclear if these reporters or only their sources would be the targets of such an investigation.

"I don’t think it’s that many people because I think they only have a few sources within these agencies," Nunes hypothesized.

Nunes said the other two referrals would allege conspiracies to manipulate intelligence and to abuse the FBI’s sensitive FISA surveillance process to spy on a former Trump campaign adviser, Carter Page.

Without providing details, Nunes alleged that the intelligence community began spying on the Trump campaign in late 2015 and early 2016. Then he suggested that former FBI Director James Comey committed the "ultimate spying" himself — by taking contemporaneous notes of his interactions with Trump and then after he was fired in May 2017, funneling them to The New York Times through an associate. He then said Mueller was appointed "to spy on an acting president again," though there’s no evidence to support the claim.

After initially holding out for a productive relationship, Democrats have soured on Barr, accusing Trump’s newly appointed attorney general of bottling up Mueller’s final report last month and conveying his own views of Mueller’s findings. Barr issued a four-page summary of Mueller’s bottom-line conclusions last month, emphasizing that Mueller "did not establish" a conspiracy between Americans and Russians and noting that Mueller did not reach a "traditional prosecutorial judgment" about whether Trump obstructed the investigation.

Barr infuriated Democrats by issuing his own judgment on obstruction instead, absolving the president on the matter, even though he later told Congress that Mueller had not asked him to do so. Democrats have also spent weeks demanding access to Mueller’s entire report, even elements that may be classified or part of ongoing investigations.

They’ve argued that Congress has long handled such sensitive material, even if it’s never made public, to inform their own efforts to oversee the Trump administration and protect future elections from foreign interference.