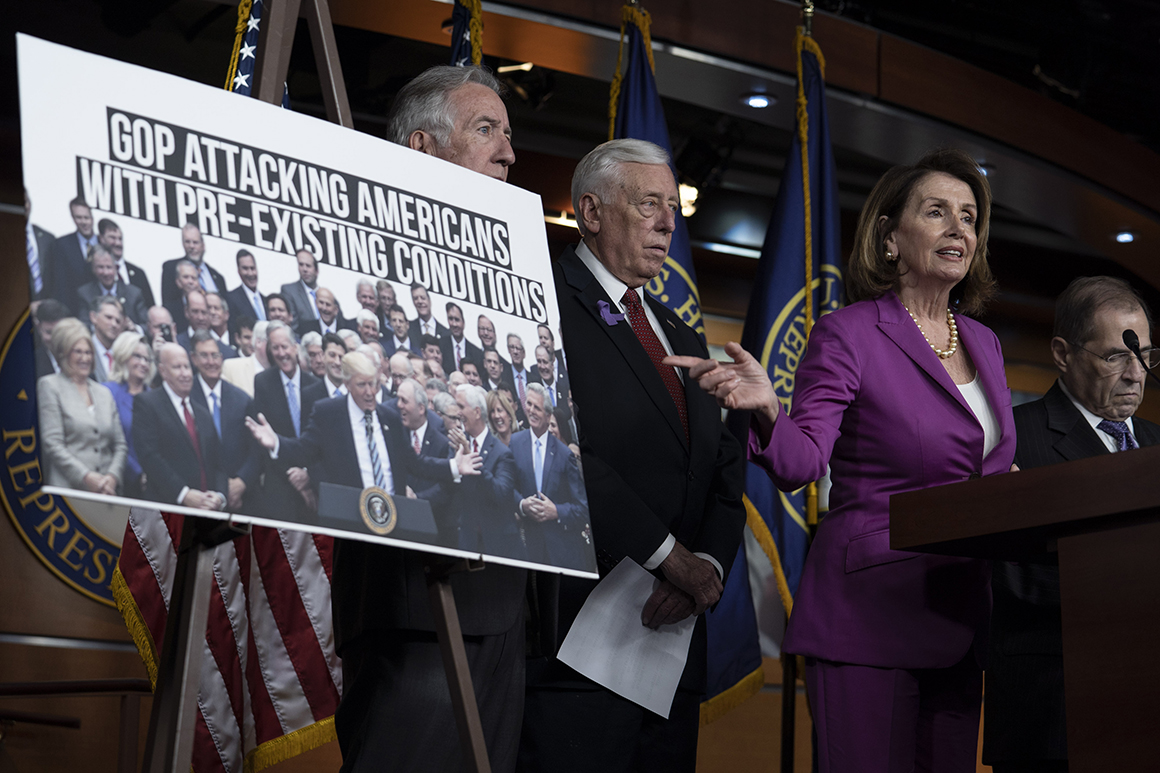 House Democrats disagree sharply over where to take the nation’s health care system, but the infighting has eased — and for that they can thank President Donald Trump.

The Trump administration’s renewed assault on Obamacare has quelled for the moment the simmering tensions over "Medicare for All" between Democrats’ vocal progressive wing and more moderate members and leaders.

Even the most ardent single-payer advocate knows it’s not happening overnight — and that in the meantime, they need to rally around Obamacare, both because they want to prevent millions of people from losing their insurance and because the Affordable Care Act and its protection for people with pre-existing conditions has become one of Democrats’ most potent political messages.

“I haven’t seen a single Democrat who isn’t committed to supporting the ACA,” said Rep. Ro Khanna (D-Calif.), a prominent and devoted supporter of Medicare for All. “And there’s nothing inconsistent with saying that we’re going to defend the Affordable Care Act to the hilt but we’re also going to fight for Medicare for All.”

Yet Democratic differences over how far and how fast to expand health coverage persist below the surface, and Republicans are eager to exploit them. The Republican-led Senate is considering a vote on Medicare for All purely to divide and embarrass Democrats — as they recently tried to do on the Green New Deal. And from the White House on down, the GOP is looking for every opportunity to paint Democrats as reckless socialists in the lead-up to the 2020 election.

But the ACA, which was incredibly divisive when the Democrats last held the House nearly a decade ago, is now the glue party leaders are hoping will hold the caucus together well into 2020.

“We’ve got to save what we’ve got,” said freshman Rep. Donna Shalala (D-Fla.), former President Bill Clinton’s health secretary and a close ally to Speaker Nancy Pelosi. “The message [from leadership] is: We need to band together now. We’re open to other discussions, but step one is to defend the Affordable Care Act."

The renewed legal battle, coupled with Trump’s recent pledges to repeal and replace the law after the 2020 elections, has been a gift to Democrats, who spent much of the year’s first three months hampered by infighting and straining to making concrete headway on the party’s top health care priorities.

House Democrats flipped 40 seats in November on vows to protect pre-existing conditions and lower prescription drug costs, a message that resonated in red and blue districts alike. But it’s proven difficult to follow through on those policies.

Now, about 100 days into power, the party has little to show for its efforts beyond passing a few toothless resolutions condemning Trump’s health agenda and a slate of bills that even Democratic lawmakers concede are “low-hanging fruit.”

Democrats have yet to agree on how to pay for the hundreds of millions of dollars their legislation would pour into shoring up the ACA and expanding subsidies for health coverage. And on drug pricing, Democrats remain split over how aggressively to tackle the issue, and how much to collaborate with Trump, who has outlined some steps of his own that break with Republican orthodoxy.

Many progressive Democrats want to force drug companies to negotiate their prices with Medicare or risk harsh penalties. Other policies are also in the mix, and Democratic leaders have sought discussions with the White House, touching off a fresh round of grumbling among the chamber’s liberals.

“We certainly have not yet delivered on our promise with reference to pharmaceuticals,” said Rep. Lloyd Doggett (D-Texas), who authored an ambitious Medicare negotiation plan that’s won endorsement from the chamber’s progressives. “I hope that we can.”

But Trump’s surprise legal attack on Obamacare has shifted the spotlight off Democrats’ struggles and back onto the GOP’s yearslong attempts to gut the law, easing pressure on top Democrats who have spent much of the year trying to keep the fractious caucus together.

The Trump Justice Department had originally backed only a portion of the Texas-led lawsuit to gut the law; it recently threw full support behind a judge’s ruling that the entire statute is unconstitutional and should be scrapped. That decision is now on appeal and could reach the Supreme Court smack in the middle of the 2020 campaign. Yet Republicans have so far shrugged off the need to develop a contingency plan if Obamacare falls.

“In the years I’ve been here, Republicans have never agreed on a health care plan. Not once,” said Ways and Means Chairman Richard Neal (D-Mass.), who has faced intense pressure from activists over his reluctance to hold a hearing on Medicare for All. “If he wants to have this battle over health care, I’m in.”

Rep. Anna Eshoo (D-Calif.), who chairs the Energy and Commerce Health Subcommittee and had heard similar criticism from the left over her ties to major drug industry donors and her biotech-heavy home district, appeared visibly relieved at the chance to turn public attention back on Republicans.

“Nice to start the day with a smile,” she said when asked about health care.

House Democratic leaders are hoping to regain their footing on health care after the April recess, when the chamber will tee up votes on its first set of drug pricing bills. And a package expanding Obamacare’s benefits and reversing major Trump health priorities could hit the floor by early summer, giving vulnerable members real legislative accomplishments to talk up on the campaign trail.

Centrist Democrats, frustrated by the publicity given to the party’s liberal wing, are counting on those actions to refocus attention toward a pragmatic agenda that plays the strengths of the swing-district moderates who flipped dozens of seats in 2018 on vows to protect Obamacare.

“You gotta love activists: They’re so passionate, they feel so strongly about it and it’s great,” said Rep. Ron Kind (D-Wis.). “But those of us who are in elected positions also have to deal in the world of reality and just what is feasible at the moment.”

Yet more disagreements on policy and strategy are certain to rear up in the months to come.

Sen. Bernie Sanders (I-Vt.) angered some Democrats just this week with a high-profile rollout of his revised single-payer bill, right in the middle of efforts in the House and Senate to focus attention on drug pricing and the Trump administration’s Obamacare attacks.

“We were winning,” one senior Democratic aide complained to POLITICO the day of Sanders’ announcement. “This is just like when we were trying to save DACA [immigration protections for Dreamers] and some Democrats started calling for abolishing ICE.”

The progressive wing in the House is also determined to keep pushing the party left, rallying support for Medicare for All and encouraging activists to pressure committee leaders to hold hearings — much to the frustration of establishment Democrats.

But just about every Democrat, from the die-hard devotees of Medicare for All to centrists from swing districts wary of single-payer, has voiced support for Pelosi’s efforts to defend Obamacare in federal court, shore up its markets, and roll back the Trump administration’s executive orders aimed at weakening the law — even if they disagree about where to go from there.

“Nancy’s great at this, keeping us together,” said Rep. Mark DeSaulnier (D-Calif.), an advocate for Medicare for All. “On health care, you can have it both ways, but it’s a question of when. And the first thing is to do no harm.”