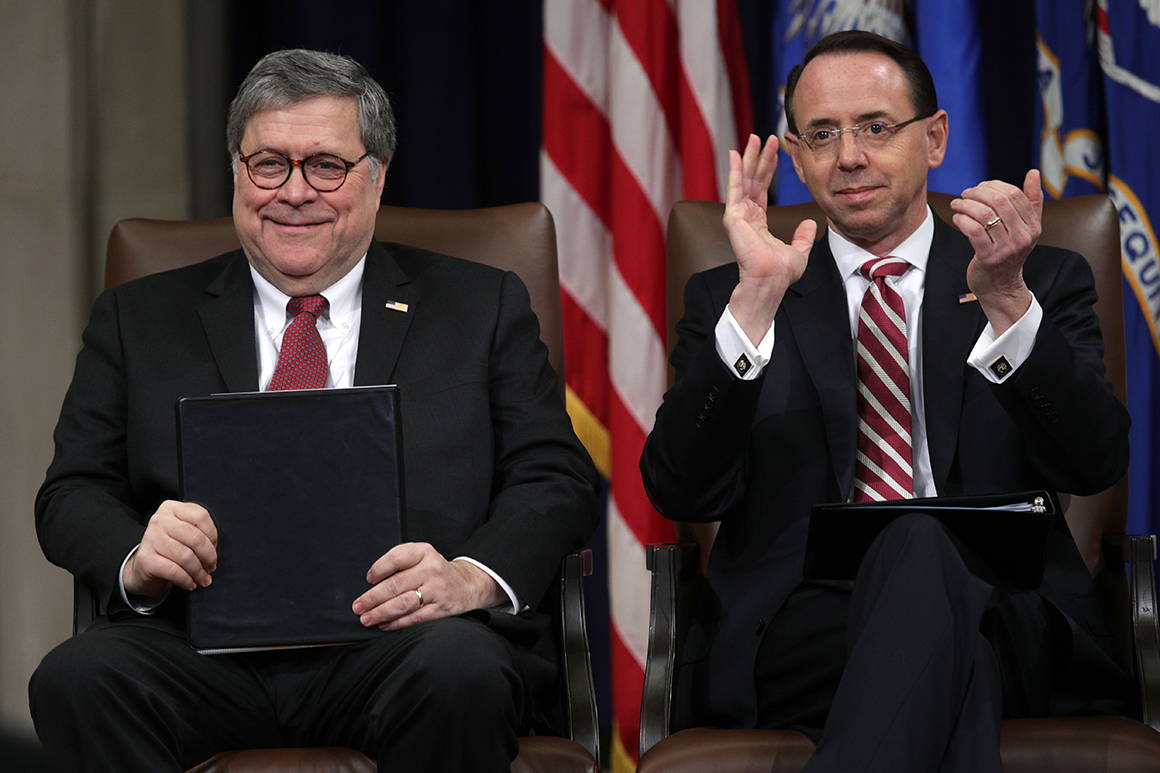 Deputy Attorney General Rod Rosenstein on Thursday defended Attorney General William Barr and pushed back against criticism of the Justice Department’s handling of special counsel Robert Mueller’s highly anticipated report, which Barr has thus far only offered his own summary of.

Democrats have lashed out at Barr, who has pledged to release a redacted version of the roughly 400-page document detailing the findings of Mueller’s probe into whether the Trump campaign colluded with Russia to interfere in the 2016 election. Last month, Barr released a summary of Mueller’s report stating that the special counsel’s team found no evidence of collusion and could not come to a conclusion on the question of whether or not President Donald Trump committed obstrucion of justice.

Member’s of Mueller’s team have reportedly disputed Barr’s characterization of the special counsel’s report, arguing anonymously that the attorney general’s framing was kinder to the president than the report itself.

“He’s being as forthcoming as he can,” Rosenstein said in an interview with the Wall Street Journal. “And so this notion that he’s trying to mislead people, I think is just completely bizarre.”

Barr, in his four-page summary of the Mueller report, also wrote that he and Rosenstein dismissed the possibility of filing charges against Trump, saying it was clear it was not the president’s “intent” to obstruct an investigation.

Rosenstein on Thursday would not tell the Journal why Mueller did not clearly answer the obstruction question in his report. In the weeks since Barr sent his letter, Democrats have accused the attorney general of mischaracterizing the special counsel’s findings to protect the president.

“It would be one thing if you put out a letter and said, ‘I’m not going to give you the report,’ ” Mr. Rosenstein said in the interview. “What he said is, ‘Look, it’s going to take a while to process the report. In the meantime, people really want to know what’s in it. I’m going to give you the top-line conclusions.’ That’s all he was trying to do.”

The report has deepened a partisan schism, as Republicans claim it means complete exoneration for Trump, while Democrats demand to see an unredacted version of the document as well as the underlying evidence.

Barr has said he will redact information that falls into four categories, including material related to grand-jury matters and the privacy of individuals not charged with crimes. Rosenstein would not say how the redaction process is going, the Journal reported, but said the public should have “tremendous confidence” in Barr.

The Journal said Rosenstein declined to comment on Barr’s testimony Wednesday, when the attorney general told senators he planned to launch an investigation of the origins of the Russia probe and said he believes the Justice Department “spied” on the Trump campaign.

Rosenstein only said “he is open to objective scrutiny and stands by his approval of the renewal,” the Journal reported.

Trump supporters have rallied around cries for an investigation into the probe’s genesis, while Democrats accuse Barr of spreading a debunked plot.

Rosenstein, overseeing the Russia probe because of then-Attorney General Jeff Session’s recusal from it, appointed Mueller as a special counselor after the president’s move to fire then-FBI Director James Comey, who had overseen the bureau’s 2016 investigation.

The deputy attorney general, the Justice Department’s No. 2 official, is preparing to leave his post, a move he has been planning for weeks but put off as the Russia investigation showed signs of wrapping up. Rosenstein told the Journal he doesn’t know what he will do next but hopes to start a new job at the end of the summer.