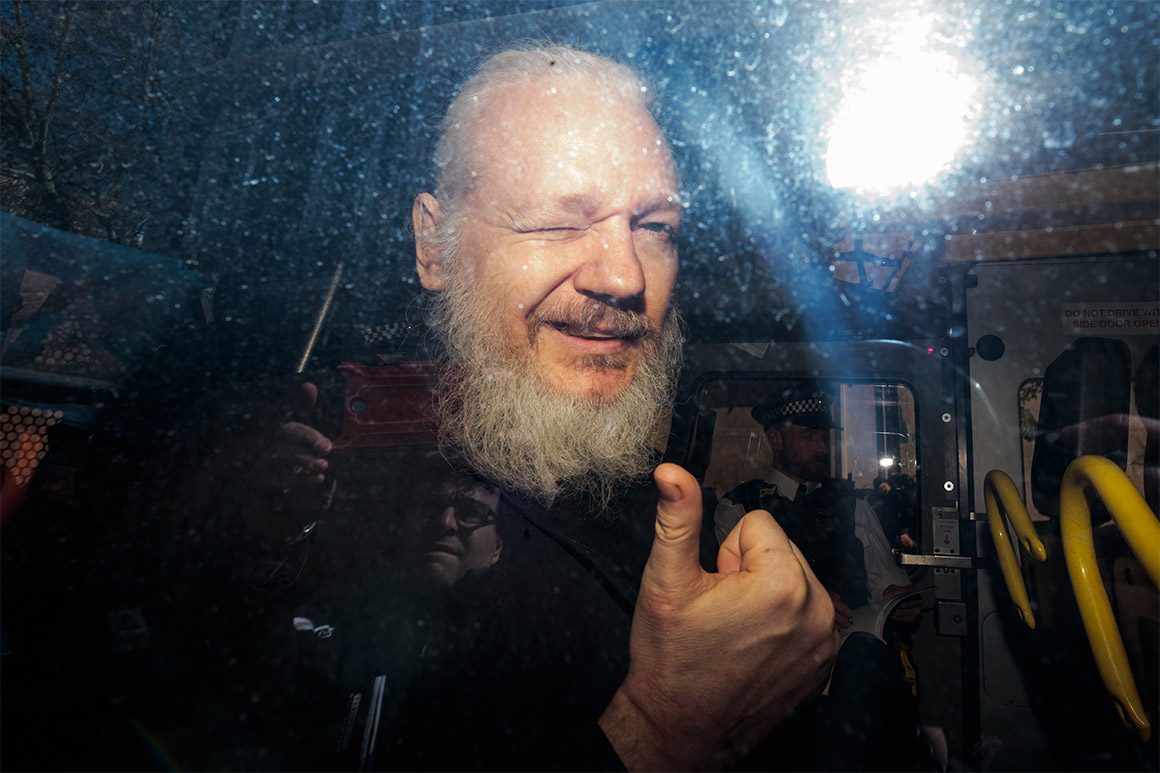 British police arrested him on Thursday at the Ecuadorian embassy in London, where he has been living in external exile since 2012. The arrest was prompted by an extradition warrant filed by the United States, which has charged him with conspiracy to commit computer intrusion.

In the immediate aftermath of the arrest, Assange partisans like journalist Glenn Greenwald have fulminated about the government’s heavy-handednesss, saying this represents a dangerous crackdown on freedom of the press. If Assange goes down this way, they warn, our constitutional freedoms are going with him.

But if you look at the indictment, on a very narrow charge of computer hacking conspiracy, it’s evident that the government stayed well clear of the dangerous notion of prosecuting a publisher for publishing. And, if anything, Assange might get exactly the fight he’s looking for, served up to him by the government he purports to loathe.

If the case plays out as expected, he’ll first get a platform in Britain to argue to a worldwide audience that it’s all a political setup. And if he loses that round, and the case does come back to the United States, he might well get the government to serve him up, by law, the kind of massive document haul he loves.

Given the broad constellation of charges prosecutors have contemplated throwing at Assange, including the Espionage Act, Wednesday’s indictment is very weak tea. Unless prosecutors bring stronger charges against Assange—something Reuters reports the Justice Department might do—the former fugitive could succeed in using British extradition proceedings to avoid U.S. prosecution.

Criminal defense lawyer Ken White was among the first to note the narrowness of the indictment. The government’s bare-bones indictment has avoided First Amendment issues by not charging Assange with publishing government secrets. Instead, it’s accusing him of computer crime—of agreeing to help former Army private Chelsea Manning hack the password on a classified government computer system containing classified information. (Manning had previously downloaded and shared classified files with WikiLeaks, which had published them.)

Did Assange actually perform the offered assistance? The indictment is cagey on this point. “Cracking the password would have allowed Manning to log onto” unauthorized computers, the indictment says. “Such a measure would have made it more difficult for investigators to identify Manning as the source,” it continues. (Emphasis added.)

The government’s belief that Assange offered Manning help with password cracking isn’t news—it was aired during Manning’s 2011 trial. As my colleague Josh Gerstein reported, prosecutors presented chat logs from Manning’s personal computer in which she asked a user named “Nathaniel Frank” for advice on cracking passwords, and that prosecutors linked that identity to an email address used by Assange. “Frank” replied that he had “rainbow tables” that could assist her.

Prosecutors probably brought a standard-issue computer crime against Assange instead of espionage charges for two reasons. Because computer crimes are punished under the law in both the United States and the U.K., extradition cases involving them are relatively straightforward. Bringing espionage charges, on the other hand, would have complicated extradition by allowing a defendant to directly invoke the “political offense exception,” arguing that the treaty signed by the United States and the U.K. stipulates that a person shall not be extradited to be prosecuted of an offense of political character. Fethullah Gulen, a Turkish dissident currently living in the United States, is prepared to shield himself from any attempt by Turkey to extradite him using this exception.

If U.S. prosecutors bring no additional charges against Assange, he will surely argue in extradition proceedings that the United States is attempting to deceive British authorities about their true motives, charging for crime A (computer hacking) when their real intention is to punish him for an unindicted crime B (helping to steal classified documents). (The existing indictment accuses Assange of conspiring to do just that, although it doesn’t level an actual charge at him over it.) He might also argue successfully that the computer charges are a fig leaf, that the United States is using the pretext of the computer crime charge to extradite him with the intention of filing espionage charges against him when he arrives in the America. Either argument could sway the British.

Even if prosecutors extradite Assange, he has other ways to thwart them. He would have the right to demand access to reams of potentially exculpatory government information to mount his defense, no matter what the charges. Are prosecutors ready to give up additional information—to hand it to lawyers for Julian Assange—just to put him away? The crime he’s presently accused of carries a relatively light sentence of five years.

The reason prosecutors have pussyfooted around charging Assange with espionage is what the Washington Post called the “New York Times problem” in a 2013 article about the Obama-era decision not to charges Assange. “If the Justice Department indicted Assange, it would also have to prosecute the New York Times and other news organizations and writers who published classified material, including the Washington Post and Britain’s Guardian newspaper,” anonymous officials told the paper.

It might be true, as worried press advocates have been saying, that the move against Assange signals a new willingness on the Trump administration’s part to set aside the currently accepted First Amendment protections and prosecute news organizations for publishing classified information. But this indictment is a long way from anything that would scare off journalists from changing the way they do their jobs. Until the Trump administration takes that leap, the First Amendment seems safe.

In 2017, I explained how President Donald Trump could learn to love leaks of classified information. Don’t leak anything to Shafer.Politico@gmail.com because I might get prosecuted. My email alerts taught my Twitter feed how to crack passwords. My RSS feed is fighting extradition to hell. Or is it heaven?