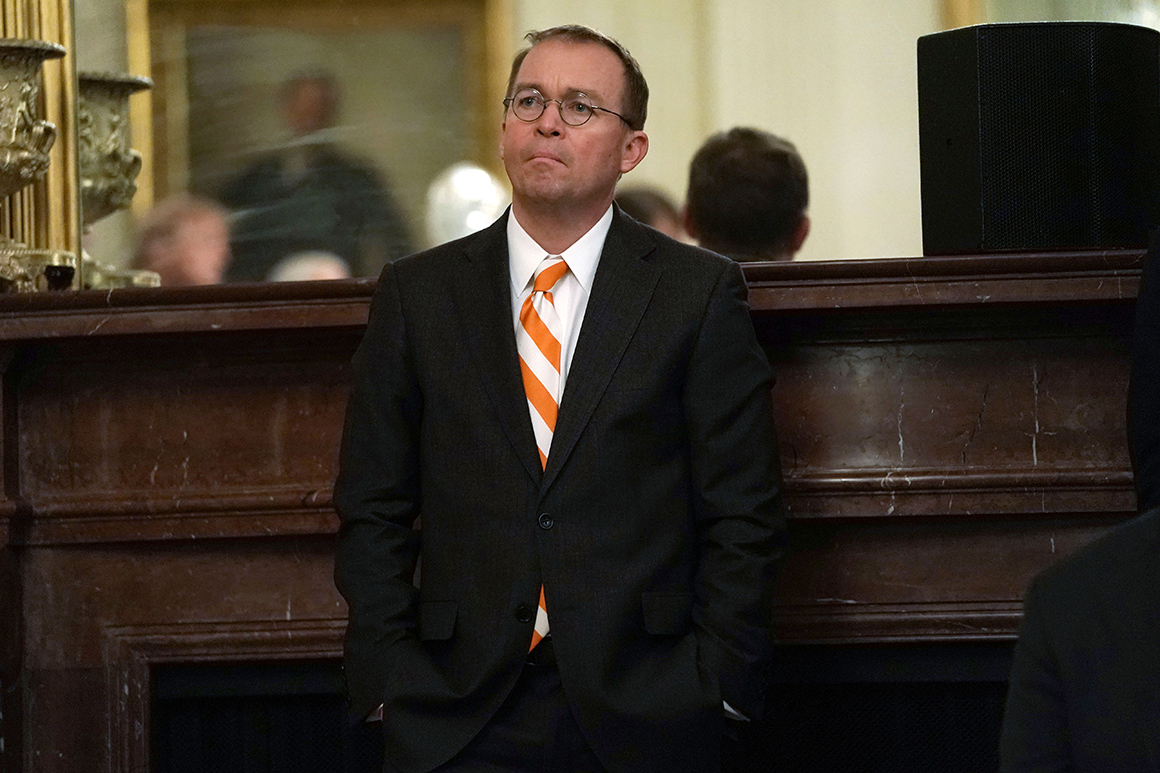 Floated for the job of Homeland Security secretary, the former Virginia Attorney General runs the anti-establishment Senate Conservatives Fund. McConnell remarked Tuesday that the group had cost the GOP seats in 2010 and 2012 by guiding the party away from more electable candidates, according to attendees at the closed-door Republican policy lunch.

Now with McConnell up for reelection and eager to protect his narrow majority, it’s Senate Republicans who are trying to take control.

In addition to confronting Trump on his purge at the Department of Homeland Security and his threat to deploy auto tariffs and keep existing levies, GOP senators hope they can persuade the president to avoid nominating Cuccinelli or Kris Kobach, another immigration hard-liner, to lead DHS. They also want Trump to drop plans to nominate Herman Cain to the Federal Reserve and are considering whether to challenge Stephen Moore’s nomination to the Fed.

“We’re trying to do everything we can to send the message before they send these people up here,” said a Republican senator who 20 seconds later lamented a separate problem: Trump’s “trade nightmare.”

It’s an unusual time in Trump’s Washington, with a Senate Republican majority that’s been at odds with the president for months now — and with GOP senators increasingly comfortable in trying to ward off what they see as Trump’s worst impulses. It’s an inflection point, with Senate Republicans weighing how hard to try to contain the president.

“We’ve been down this road so many times, it’s hard for me to measure," said Senate Majority Whip John Thune (R-S.D.) when asked about the simultaneous intraparty struggles. "It just happened to be issues that came to the surface at the same time."

“This moment is a little more stacked than probably most other moments,” said Sen. Kevin Cramer (R-N.D.), who met with Trump about his Space Force on Tuesday and sought to downplay the feuds. “The president is very good at trial balloons and pulling back.”

The tensions between Trump and Senate Republicans have raged continuously for four months, an arc that intersects neatly with when Mick Mulvaney took the reins as the president’s acting chief of staff and helped goad the president into a shutdown that lawmakers loathed — and then into a national emergency declaration that a dozen Republicans voted down on the Senate floor.

Some Republicans barely hide their feelings about Mulvaney. Asked about his role during the shutdown, Senate Appropriations Chairman Richard Shelby (R-Ala.) responded that “some people were interfering” in bipartisan negotiations.

At Mulvaney’s urging, Trump pressed Senate Republicans to put forward an Obamacare replacement plan, with the president telling reporters he would transform the GOP into “the party of healthcare.” McConnell soon made it clear his caucus would do no such thing, and the president backed off, tweeting that Republicans would wait until after the 2020 election to introduce a new health care plan.

Yet Senate Republicans are still wrestling with the Trump administration, trying new ways to blunt the administration from taking them places they don’t want to go.

Asked about steel and aluminum tariffs he wants removed before backing Trump’s new trade deal with Mexico and Canada, Sen. Chuck Grassley (R-Iowa) responded: “I’ll spend five minutes with you if the president reads what you say.”

Grassley’s concerns aren’t isolated to the president’s protectionist strategy. He’s also pleading with the White House to keep his former staffer on as head of U.S. Citizenship and Immigrations Services. Oh, and he had to rebut the president’s ruminations on wind turbines causing cancer just last week.

He’s not the only senator embroiled in multiple fights with the administration.

Sen. Mitt Romney (R-Utah) is pushing back on the sacking of DHS Secretary Kirstjen Nielsen, the Secret Service director and Immigration and Customs Enforcement nominee.

“It’s unfortunate to have so many vacancies and so little time for proper transition,” Romney said of DHS. “So it’s a very troubling setting.”

Romney also asserted that he will vote against Cain if he is nominated to the Fed, joining Sen. Lisa Murkowski (R-Alaska) and Sen. Cory Gardner (R-Colo.) in opposition. The swift anti-Cain blitz might cripple his nomination in the Senate — though Trump could go forward with him, Kobach or Cuccinelli anyway and test his sway with Senate Republicans.

The goal, though, is for Senate Republicans to stop the nominations before they are forced to vote on them.

“My preference would be to try to stabilize the situation,” Johnson said.

The Trump administration is also facing pushback on far weightier issues than personnel.

Sen. Rand Paul (R-Ky.) fumed on Wednesday after he pressed Secretary of State Mike Pompeo on whether the United States has the authority to go to war with Iran, to which Pompeo replied that he’d “prefer to leave that to the lawyers.”

“He couldn’t give me a very good answer,” Paul said in an interview afterward. “You would think the secretary of State would have an opinion on the Constitution and declaration of war.”

Paul seemed less concerned about the DHS shake-up or other personnel moves. And other Trump allies are perplexed at the efforts by some Senate Republicans to thwart the president from nominating his own favorites.

“It’s his job to pick people who share his vision. He’s certainly entitled to do that. And I hope that the Senate will give due consideration to whoever he decides to send up,” said Sen. Josh Hawley (R-Mo.), a freshman senator.

While Mulvaney’s predecessors, John Kelly and Reince Priebus, sought to restrain the president and forge constructive relationships with Capitol Hill, Mulvaney, a former tea party agitator from South Carolina, has made clear he has less interest in that.

If Kelly worked strenuously to limit access to the Oval Office and ensure he had the last word with the president, Mulvaney has adopted a different strategy. He told White House aides early on he had no intention of elbowing them out of meetings.

“Trump has drawn all the wrong conclusions from the first two years,” said Chris Whipple, the author of “The Gatekeepers,” a history of White House chiefs of staff. “We’ve seen that letting Trump be Trump is a recipe for failed government.”

Mulvaney has slowly brought in a half dozen allies, including the head of the Domestic Policy Council, Joe Grogan, a principal deputy chief of staff, Emma Doyle, and an aide with national security expertise, Rob Blair, who share access to the president and usually share Mulvaney’s views.

Since Mulvaney’s ascension, the president, often encouraged by Mulvaney, has provoked his Republican colleagues virtually non-stop. Trump appears freed by the move to push unorthodox nominees and revert to immigration and trade policies unpopular with most of his fellow Republicans.

“The president has his own way of doing things and it’s unconventional and it upsets some people,” said Sen. John Kennedy (R-La.). “This is not Olympic gymnastics where you get style points. This is results.”

Yet even Kennedy had a bone to pick this week, angry enough about Nielsen’s dismissal and the subsequent backstabbing from White House officials to denounce the moves on the Senate floor.

“I don’t like the way her colleagues treated her,” he added. “I don’t think one person, even if it’s Alexander Hamilton, can come into the Department of Homeland Security and fix the immigration problems.”