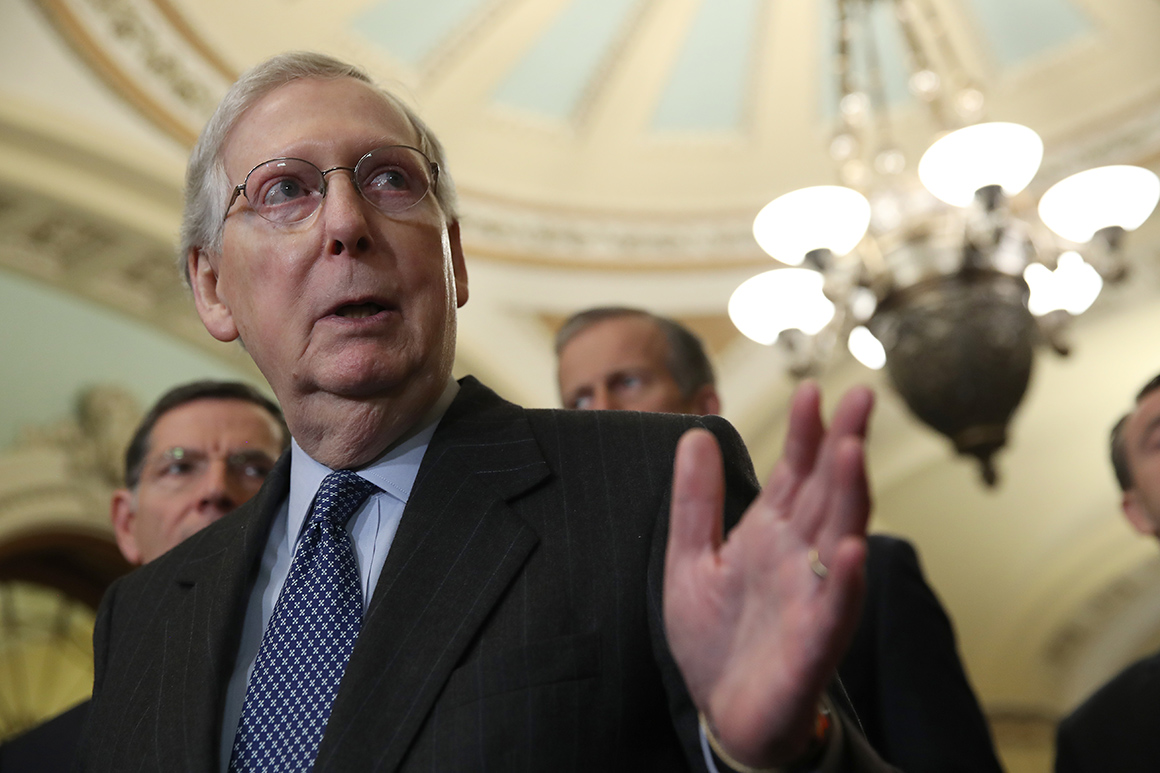 Senate Republicans, eager to exploit Democrats’ divisions on health care, want to put their legislative rivals on the spot by bringing Sen. Bernie Sanders’ “Medicare for All” bill to the floor for a vote.

Republicans used a similar tactic last month when Senate Majority Leader Mitch McConnell brought the “Green New Deal” plan from freshman Rep. Alexandria Ocasio-Cortez (D-N.Y.) to the Senate floor for a vote to highlight Democrats’ disunity and portray them as out of step with Americans. But most Democrats voted present, deeming the vote a stunt.

McConnell has not yet said whether he’ll bring the health care bill, introduced Wednesday, up for a vote, but some Republicans are hopeful he will.

“I think it deserves a full debate and a vote and see how many Democrats who are co-sponsors actually support it,” said Sen. John Barrasso (R-Wyo.), chairman of the Senate Republican Conference.

Sen. John Cornyn (R-Texas) said he hoped the bill would be brought to the floor. Senate Majority Whip John Thune (R-S.D.) noted that the decision was ultimately up to McConnell but that a vote “stakes out people’s position,” while Sen. Roy Blunt (R-Mo.) said that “we’ll see how many of the other senators running for president are co-sponsors of the bill.”

“It’s a big issue, and if they want to have debate on this, we can have one,” Blunt said.

A Senate leadership aide suggested there was openness on the part of Republicans to push for a vote. “The Green New Deal vote helped shine a light on the Democrats’ radical plans,” the aide said, “and we will be looking for future opportunities to highlight their socialist agenda.”

Although McConnell has not indicated what he’ll do on Medicare for All, he blasted the proposal Wednesday in an interview with Fox News’ Bret Baier.

“It ought to be called ‘Medicare for None,’” he said. “One hundred eighty million Americans would lose their private health insurance, that many of them have negotiated for at work. … You want to turn America into a socialist country? This is the first step.”

Senate Democrats on Wednesday brushed off the prospect that Republicans might try to corner them on a Medicare for All vote, pointing to a prior GOP maneuver that failed to land any serious blows.

“Mitch is going to do what Mitch is going to do,” said Sen. Brian Schatz (D-Hawaii), who is a co-sponsor of the Sanders bill. “If he wants to troll us, that’s what Twitter is for. I’m 100 percent sure we’ll vote present again, because it’s getting goofy.”

“I think at this point we’d probably do the same thing we did with his bogus Green New Deal vote where you vote present,” Whitehouse said, adding that calling for such a vote “would be pure political mischief.”

Sen. Richard Blumenthal (D-Conn.), a co-sponsor of Sanders’ bill, agreed that a potential vote at this point would be a clear “stunt,” but said that if given the chance, he would vote in favor of it.

The Medicare for All bill so far has 14 co-sponsors, including 2020 presidential candidates Sens. Kamala Harris (D-Calif.), Cory Booker (D-N.J.), Kirsten Gillibrand (D-N.Y.) and Elizabeth Warren (D-Mass.). The bill is among several Democratic proposals in the Senate to address expanding access to health care.

McConnell has tried to bait Democrats on Medicare for All in the past, holding a vote in 2017 on a single-payer measure aimed at creating problems for vulnerable red-state Democrats. Nearly the entire Democratic conference, as well as Sanders, sat out the vote, which failed 0-57.

GOP lawmakers in the House have for months demanded a vote on Medicare for All, confident that it would exacerbate Democratic divisions and make the party vulnerable to charges of “socialism” in the upcoming election. House progressives have embraced these calls from across the aisle, and have continued their own push for hearings and votes on the single-payer bill drafted by Rep. Pramila Jayapal (D-Wash.)

But Democratic leadership has so far ignored the calls from the right and the left to bring the policy to the floor and has focused instead on broadly popular bills to improve and shore up the Affordable Care Act.

Now, thanks to the Trump administration’s decision to change its position in an ongoing lawsuit and argue that the entire health law should be thrown out, the pressure has shifted back to Republicans, who are struggling to meet President Donald Trump’s demand for a replacement.

With Senate Republicans’ health care leaders indicating that they have yet to even begin seriously discussing a new health care plan, the GOP is eager instead to put Medicare for All up for scrutiny.

After the introduction of Medicare for All, the White House blasted the bill.

Senate Democrats expressed frustration this week that they could be put through that exercise yet again, though they overwhelmingly directed their ire at Republican leaders, not the Medicare for All advocates within their own party.

“McConnell is hellbent on doing nothing to help this country but do political votes, and it’s really starting to tick me off,” said Sen. Jon Tester of Montana, a red-state Democrat who voted against the single-payer measure in 2017. “He’s turned into the problem here when he could be the solution.”

Sen. Doug Jones of Alabama, who faces a tough reelection fight in 2020, spun the potential for a vote as a positive for Democrats who have enjoyed a clear political advantage on health care issues since the GOP’s failure to repeal Obamacare. The move would open up yet another opportunity for the party to contrast its slate of proposals expanding health coverage with Republicans’ continued lack of a coherent message.

Still, Sanders’ high-profile rollout of his Medicare for All bill comes on the heels of the Trump administration’s renewed effort to eliminate Obamacare — threatening to reopen divisions among Democrats otherwise eager to circle the wagons in defense of the ACA.

Trump in late March directed his Justice Department to throw its full support behind a legal effort to wipe out Obamacare and has since vowed to develop a new plan for replacing the health law. The surprise pivot to health care has panicked congressional Republicans eager to move on from the politically dangerous issue, which energized Democrats who ran — and won — nationwide on protecting Obamacare’s popular benefits in 2018, and believe they can do so again ahead of 2020.

Sanders’ push for Medicare for All so soon afterward prompted some grumbling that it could disrupt the party’s unity on a key issue.

“A senator can introduce a bill if he wants,” said Sen. Angus King (I-Me.), a staunch Obamacare advocate. “The question is, will Senator McConnell bring it to the floor in order to try and foment dissension?”

Sen. Joe Manchin (D-W.Va.) said he was focused on taking care of “Medicare for the some that get it right now,” noting that the program would be insolvent by 2026. He added that the Medicare for All proposal right now was “not practical at all.”

Several Senate Democrats downplayed the significance of Sanders’ Wednesday rollout, portraying it as simply part of his nascent presidential campaign before trying to turn the focus to friendlier territory.

“I haven’t heard of it. If I haven’t heard of it, then he may not be very successful in drawing attention to it,” Sen. Chris Coons (D-Del.) said when asked whether Sanders’ new Medicare for All bill risked disrupting Democrats’ unity. “Democrats are always unified in trying to prevent the president from further destroying what’s left of the Affordable Care Act. All of us agree on that.”