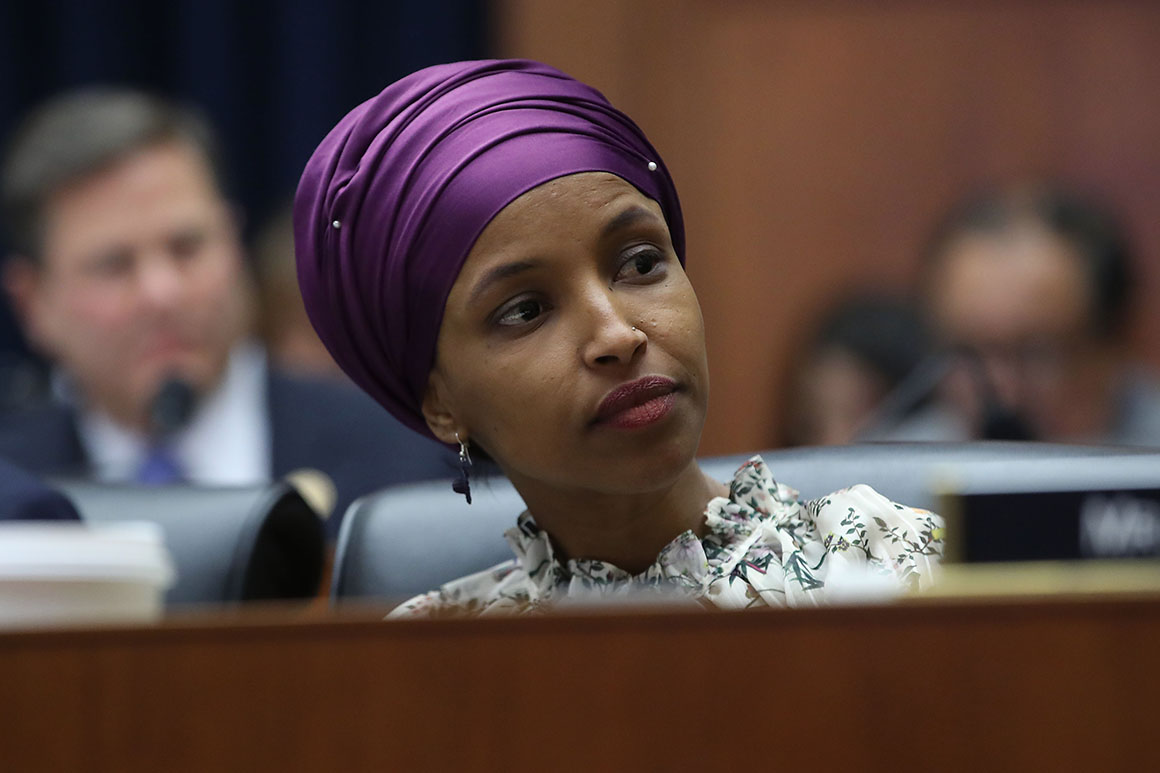 LEESBURG, VA. — Rep. Alexandria Ocasio-Cortez and other House Democrats are jumping to the defense of Rep. Ilhan Omar as she faces yet another wave of conservative attacks for her recent remarks on the Sept. 11 terrorist attacks.

“We are getting to the level where this is an incitement of violence against progressive women of color,” Ocasio-Cortez told reporters at the House Democratic retreat here Thursday.

“And if they can’t figure out how to get it back to policy we need to call it out for what it is. Because this is not normal, and this is not a normal level of political debate or rhetoric.”

The Minnesota Democrat has come under fire this week for describing Sept. 11, 2001, as a day when “some people did something,” as she described how that act of terrorism contributed to the rise in Islamophobia globally.

“Far too long we have lived with the discomfort of being a second-class citizen and frankly, I’m tired of it, and every single Muslim in this country should be tired of it,” Omar said last month at an event hosted by the Council on American-Islamic Relations. “CAIR was founded after 9/11 because they recognized that some people did something, and that all of us were starting to lose access to our civil liberties.”

Omar’s allies have said that her remarks — which were part of a 20-minute speech — have been grossly taken out of context by conservative websites. That backlash inspired an inflammatory New York Post cover on Thursday, which featured a photo of a flaming World Trade Center building with the caption, “Here’s your something. 2,977 people dead by terrorism.”

The controversy has also sparked a testy back-and-forth on Twitter between Ocasio-Cortez and freshman GOP Rep. Dan Crenshaw, a Navy Seal who lost his right eye during an IED attack in Afghanistan. Crenshaw seized on Omar’s comments, calling them “unbelievable” in a Wednesday tweet.

“First Member of Congress to ever describe terrorists who killed thousands of Americans on 9/11 as “some people who did something,” he added.

“You refuse to cosponsor the 9/11 Victim’s Compensation Fund, yet have the audacity to drum resentment towards Ilhan w/completely out-of-context quotes,” the New York freshman wrote, then urging him to “go do something” about domestic terrorism spurred by right-wing extremists.

Ocasio-Cortez also told reporters that it was “incredibly upsetting and triggering” for the Rupert Murdoch-owned New York Post “to elicit such an image for such a transparently and politically motivated attack on Ilhan.”

“It’s transparent. Frankly, this is getting to a level that’s beyond politics or partisanship,” she added.

“Let’s be clear, words matter: we were attacked by terrorists on 9/11. Thousands were murdered, too many of whom were from my district,” Rose responded on Twitter. “But actions matter too,” he added, encouraging Crenshaw to become a cosponsor of the 9/11 victims’ legislation.

“She’s getting a lot of scrutiny. I know she knows she has to be careful about what she says,” Jayapal told reporters at the Democratic retreat here on Thursday. “I also know there’s a lot of scrutiny on here that’s not on other people.”

And Rep. Rashida Tlaib (D-Mich.), another high-profile progressive freshman, defended her “sister,” saying critics of Omar were putting her life at risk by “taking those words out of context.”

“They do this all the time to us, especially women of color,” Tlaib said on MSNBC. “They do that, they take our words out of context because they’re afraid, because we speak truth, we speak truth to power.”

Rep. Katherine Clark, vice chair for the House Democratic Caucus, said on Thursday that Omar’s status as one of the first Muslim women in Congress has drawn sharper scrutiny.

“What we have seen with Ilhan Omar is she is the first Muslim woman to wear a hijab in the House of Congress and that has made her a target for some people,” Clark said in an interview Thursday.

“My understanding is that she is trying to promote that Muslim people should be addressed individually, and that she is hoping for equity,” Clark said.