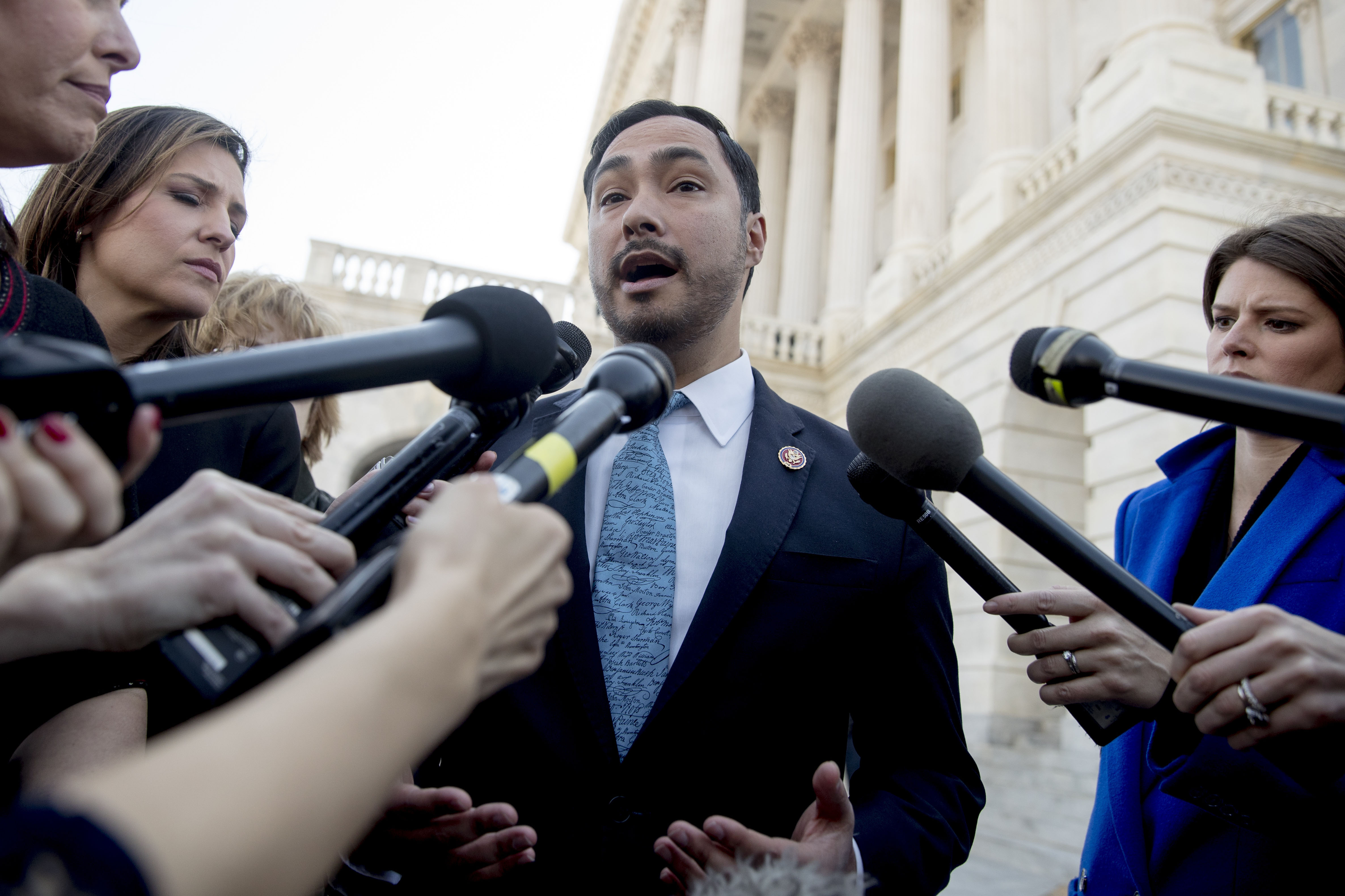 Democrats are closer than they’ve been in decades to winning statewide in Texas. But a looming clash between two of the party’s top prospects could blow their shot.

A pair of prominent Democrats — Rep. Joaquín Castro and MJ Hegar, a veteran who narrowly lost a House race last year —are seriously considering Senate campaigns, and a potential showdown between them is already dividing the party over who is best positioned to challenge three-term GOP Sen. John Cornyn.

Neither Hegar nor Castro has announced they’re running, but both have met with Minority Leader Chuck Schumer (N.Y.) to discuss it. And both have prominent Democratic supporters convinced they represent the party’s best option to turn Texas blue. But a divisive primary would likely leave the eventual nominee damaged and cash-depleted, making the uphill climb to unseat Cornyn that much steeper.

Texas has been a decades-long obsession for Democrats, who haven’t won a statewide race since 1994, a Senate race since 1988 or carried the state in a presidential race since 1976. But driven by changing demographics and voting patterns, Democrats have been inching closer.

Donald Trump won the state in 2016 by 9 points, down from Mitt Romney’s 16-point win in 2012. Then in 2018, then-Rep. Beto O’Rourke came within 3 points of knocking off GOP Sen. Ted Cruz, and Democrats picked up two suburban House seats — one near Dallas, the other in Houston — thought unwinnable just a few years earlier.

Those improving fortunes have the party itching to press forward in 2020: While most in the party don’t see the state as a key part of an Electoral College majority, Democrats are investing in six more congressional districts in their bid to keep the House. And they’re eager to field a major challenger to Cornyn, seeking to net the three or four seats in the Senate to grab control of the chamber.

"There’s no doubt that Texas is in play for Democrats in 2020. There’s so much excitement. For us to start closing the gap in 2016, then what happened in 2018 — for sure Texas Democrats are in play in 2020," said Jaclyn Uresti, who was Hillary Clinton’s state director in Texas in 2016.

So far in the Senate race, Hegar appears to be moving faster than Castro. She met with Schumer in New York in early March, right after O’Rourke announced he would forgo another campaign to run for president instead.

Hegar wrote an email to supporters last week that she was “taking a very close look” at running for the Senate race and said the incumbent had shown a “complete lack of leadership” in Washington. Her timetable for an official announcement is not yet clear, but one source familiar with Hegar’s thinking said she remains “full steam ahead” on the race.

Castro’s intentions are less clear, according to conversations with more than a half-dozen Democrats in Washington and Texas. Castro met with Schumer last week to discuss the race, according to multiple sources familiar with the meeting. Texas Monthly published a story last month quoting a source familiar with Castro’s thinking that he was “all but certain” to enter the race, which many Democrats interpreted as a hint an announcement was imminent.

But Castro has not publicly signaled what his plans are in the weeks since, leaving most Democrats uncertain if he will run — and some frustrated by his indecision.

“I’m going to kill him,” said one source close to Castro, exaggerating for effect to relate his frustration over the congressman’s equivocation.

Castro declined multiple requests to comment on his Senate deliberations outside the Capitol in the past week. His political adviser, Matthew Jones, said an announcement would be in the near future: "Joaquin will make his announcement about running for Senate on his own timeline and in a way that works best for the people of Texas and his own family."

Hegar and Castro both have significant allies pushing for them to enter the race. Leaders at EMILY’s List have called for a woman to run in Texas, and Latino Victory Fund has launched a draft effort to push Castro into the race, including endorsements from four members of the state’s congressional delegation.

Texas Democrats are fully prepared for the possibility of a primary between Hegar and Castro, and it remains possible other candidates will enter the race — including Amanda Edwards, an African American city council member in Houston. Edwards told POLITICO in an interview she is seriously considering a bid, and that Hegar and Castro’s decisions wouldn’t influence hers. She has spoken to EMILY’s List and the DSCC about the race, and said a decision could come "sooner rather than later."

“I don’t know whether there’ll be a primary, or whether Sen. Schumer can chase one of them out of the race or not,” Cornyn said in an interview, arguing there’s a split between Washington and Texas Democrats over the preferred candidate. He said a primary would force Democrats to “get to the left of each other, which would obviously be helpful in a general election.”

Some top Democrats, however, argue a primary would actually be helpful, allowing candidates to sharpen their messages and introduce themselves to a wider set of voters.

“Nobody will be hurt in a contested primary, and you would have stronger candidates come out,” said Gilberto Hinojosa, chairman of the state Democratic Party, which recently launched a war room to attack Cornyn over the coming months. “Not that I’m hoping for a contested primary, but we’re not afraid to see that.”

Other Democrats are more nervous about the prospect. A contested primary would rob the candidates of months of time to focus solely on Cornyn and would drain resources in an extremely expensive state. The primary is in early March, earlier than any other state, and would allow ample time to pivot to the general election.

But if other candidates enter the race, and no candidate reaches 50 percent, the top two finishers would meet in a runoff at the end of May, robbing them of valuable time to raise money and build support to take on Cornyn. One veteran Democratic operative, requesting anonymity to speak candidly, said even the prospect of a runoff “hurts everyone.”

Hector Nieto, a veteran Democratic consultant based in Texas, agreed that a contested primary only helps Cornyn. “In a race where you have to save your financial resources for the general election and prevent being labeled an extremest left-wing Democrat, I would hope the eventual Democratic nominee, whoever that may be, can avoid a contested primary race,” Nieto said.

Thus far, the national party isn’t taking sides. A DSCC source, who requested anonymity to discuss internal committee thinking, said, “We have not expressed a preference and are meeting with potential candidates as they think through their decision.”

Rep. Ruben Gallego (D-Ariz.) — the first vice chair on the Congressional Hispanic Caucus, which Castro chairs — said he most recently spoke to Castro about the Senate last week and thinks he “should jump in,” though he said Castro is still deliberating. “I think he would probably steamroll [Hegar],” Gallego said, pointing to the state’s large Latino population and Castro’s stronger name ID. (Castro’s brother, Julián, is running for president.)

Uresti, Clinton’s Texas state director in 2016, praised Hegar but said Castro would be the frontrunner in the race. She said the path to improving from O’Rourke’s 2018 loss was to mobilize Hispanic voters.

“Two percent broke our hearts. But where you see we had room to grow, of course, is the Latino vote,” said Uresti. “I think at the end of the day the party would unite around a candidate like Joaquín.”

Aimee Cunningham, a Texas-based Democratic donor, is a major supporter of Hegar’s from her congressional race last year, which she lost by 3 points in a district Trump carried by 13 in 2016. Cunningham acknowledged that Castro would be a formidable candidate should he enter the race but said Hegar’s background made her the strongest option next fall.

“The fact she’s a veteran and has this distinguished service record gives her a lot of credibility with voters,” Cunningham said. “She’s a terrific fundraiser and has experience raising a lot of money for a congressional race, and that’s going to be critical.”

While Castro and Hegar stalk the race, Democrats are eager to see candidates jump in sooner rather than later, given the early primary date and the need to raise significant funds to compete in a large, expensive state.

Heather Caygle contributed to this report.