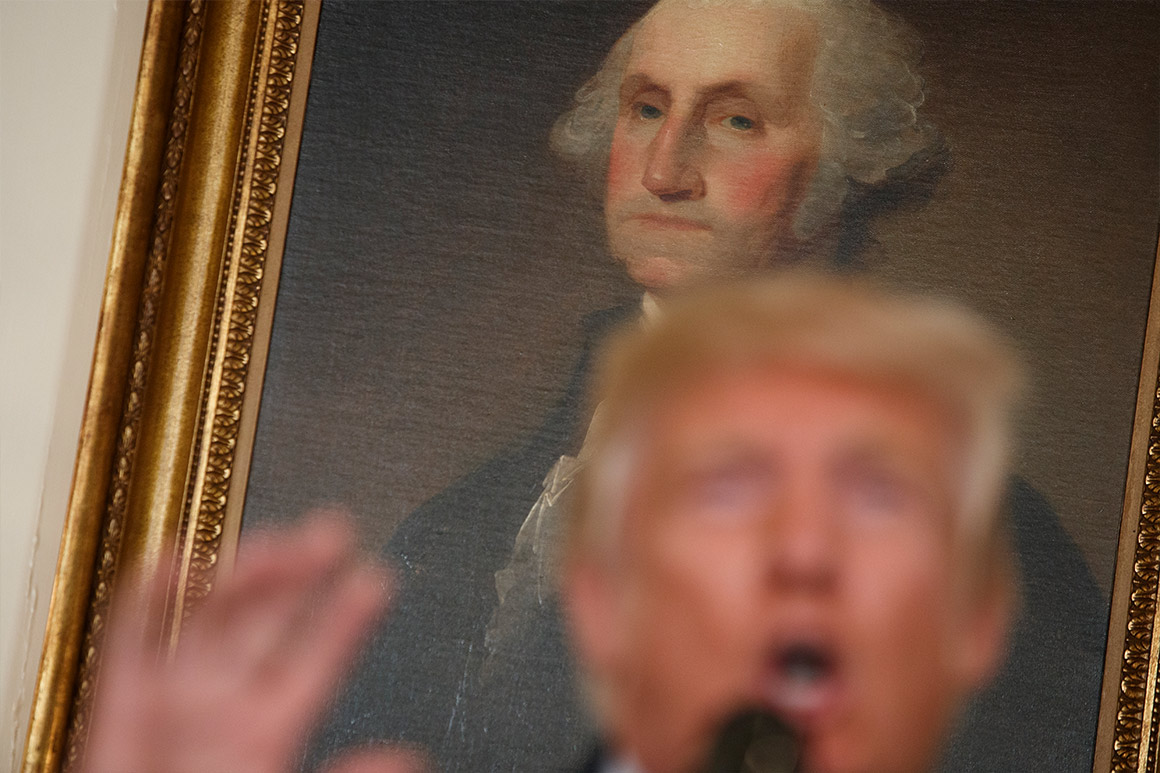 On March 4, 1797, George Washington did something that put him on a historic pedestal above Julius Caesar, Napoleon Bonaparte and every past conqueror and crowned head of Europe: He gave up power.

This wasn’t expected of him; most Americans hoped he would remain president—for life, if possible.

He chose instead to return to his farm at Mount Vernon. He yearned for home, but also to establish enduring precedents for the nation whose independence he had helped painfully win: No man is bigger than the country. The office is more important than any president. Power is a privilege to be wielded, and then handed on to another.

When Donald Trump visited Mount Vernon with the French President Emmanuel Macron last year, he reportedly commented, “If he was smart, he would’ve put his name on it. You’ve got to put your name on stuff or no one remembers you.”

There are ironies on top of ironies in the Father of Trump Tower offering posthumous advice to the Father of Our Country. But the greatest of them is that, 220 years after his death, George Washington’s name is everywhere, and remembered by everyone, largely because he chose not to maximize his own opportunities for self-promotion.

With his offhand comment, Trump inadvertently revealed a key difference between himself and Washington, though no one, friend or foe, was likely surprised. More importantly, he spotlighted the distance between merely temporal fame—essentially, name recognition in one’s lifetime—and the grail of posthumous recognition that motivates so many people in public life, as much now as in the Revolutionary Era.

Trump’s comment, while squiring Macron and his wife around Washington’s estate, no doubt reflected the truth of his experiences as a New York City real estate developer, reality-TV star and rookie presidential candidate who defied the odds—and all political norms—to win the office. In the worlds where Trump forged his reputation, few points were awarded for reticence. The opposite, however, can be true in posterity. In the long, considered judgment of history, selflessness is far more honored than self-aggrandizement.

Washington was neither modest nor lacking in ego. He was, by some measures, the wealthiest American of his age, combining his inheritance with his wife’s fortune and an extremely lucrative series of land purchases that made him proportionally far wealthier than his 44th successor. But few people today either know or care that he was so vastly rich. He’s entirely remembered for the qualities that made him an outstanding steward of a young and fragile nation: the good judgment and sense of propriety which led him to put the national interest ahead of his own.

Washington understood that institutions outlive individuals. That may not seem like a radical notion, but it’s striking how unfamiliar it was in Washington’s day. Even more shocking was the idea that one could gain power and esteem by not coveting it. After leading the American army to victory in the Revolutionary War, Washington made his first decision to retire to Mount Vernon, even though there were calls for him to be the monarch of the new nation.

Eight years later, after the failure of the Articles of Confederation showed the need for a stronger central government, Washington answered the call to become the nation’s first president. After eight successful years, he heeded his own instinct to step down. He was entirely conscious of the statement he was making. He stayed in the temporary capital of Philadelphia to attend the inauguration of his elected successor, John Adams, and then made a point of walking behind Adams as the crowd of worthies dispersed from the podium: The office is more important than any man.

The American tradition that even the most revered former office-holders must humbly stand behind their successors, recognizing that they are only guests in the house of power, is almost entirely the product of Washington’s exertions. So, too, are other traditions handed down from the Washington presidency, including the chief executive’s commitment to share power with Congress and the courts. It was one thing to sketch out such a system of government under the Constitution, but it didn’t become real until individuals – Washington foremost among them – actually chose to abide by those rules, creating a precedent we still follow today.

These concepts are now so widely accepted that they seem inevitable, like the products of natural law. They are the pillars of the American system. And even in a presidency as committed to pushing boundaries as Trump’s, they are barriers he can’t cross.

None other than King George III of England understood the force of Washington’s precedent, how in renouncing power for himself he was bestowing power on the nation he helped create. There’s an oft-told story of how the king once asked the British-American painter Benjamin West about Washington’s plans after the Revolution, to which West replied, “They say he will return to his farm.”

“If he does that, he will be the greatest man in the world,” the king supposedly replied.

It’s unlikely that the conversation was so succinct, but the American diplomat Rufus King did relate in a letter a conversation with West in which the painter described the king as saying that Washington’s ability to climb to the heights of power and then climb down “placed him in a light the most distinguished of any man living,” and that “he thought him the greatest character of his age.”

Indeed, at the tail end of the tour of Mount Vernon, a guide stationed in Washington’s study dutifully relates the story that he was the very first person in all of history to assume so much power and then renounce it. So all these centuries of reverence, symbolized by the unending stream of visitors to Washington’s home, are the product of a decision not to call attention to himself.

Two hundred and thirty years after Washington assumed the presidency, the nation is shaped by forces Washington couldn’t have imagined—not just technologies like television and social media, but a whole ethos that conflates fame and success, money and virtue, and which gave rise to a leader who literally engineered his own fame through sticking his name on every building, and every product, he could manage.

It’s hard to imagine a more different sensibility than the one that guided the young Washington when, in 1761, he inherited the family plantation. He chose to keep the name his half-brother had given it — Mount Vernon, after Lawrence Washington’s former commanding officer. There is no evidence that he ever considered Trump’s suggestion that he name it after himself.

To this day, the white mansion on a hill remains Mount Vernon, not Mount Washington. But Wikipedia reveals that there are currently no fewer than 15 Mount Washingtons in the United States.