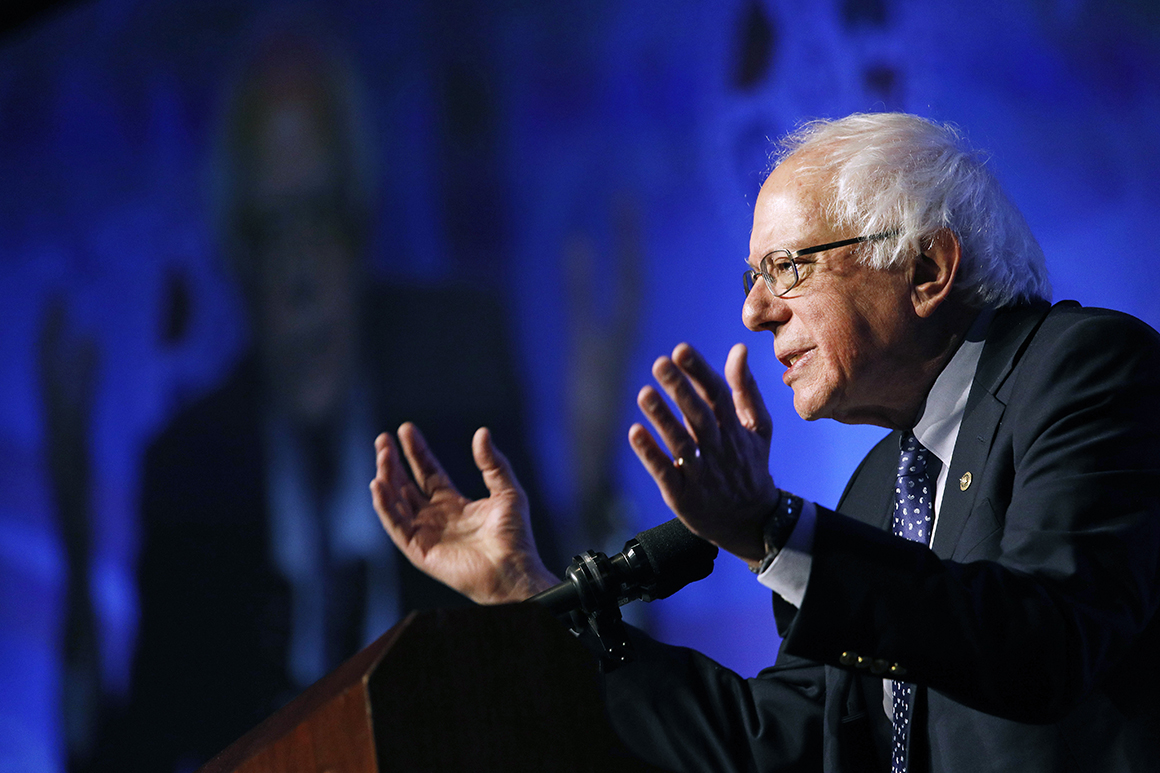 Sen. Bernie Sanders tried to stake his position as the leading progressive in a crowded presidential field on Wednesday by rolling out a "Medicare for All" plan, in the process reopening divisions among Democrats after President Donald Trump united them with his renewed assault on Obamacare.

The Vermont independent’s far-reaching plan would transform Medicare into a universal health program — an idea that’s electrified liberal voters but drawn concern over its cost. Several leading Democrats have embraced the concept of Medicare for All since Sanders first popularized it during his 2016 presidential run but have avoided offering fleshed-out plans.

Sanders’ plan is the most ambitious by far of Democrats’ slate of bills aimed at expanding health coverage, proposing a total restructuring of the the national health care system that would effectively eliminate employer sponsored insurance and other government programs like Medicaid. Democrats’ other plans would expand government coverage, but do it more slowly and rely on Obamacare’s existing framework.

Sanders’ plan doesn’t come with a price tag or specifics on what tax increases would be needed to pay for a coverage expansion that analysts project could cost upwards of $30 trillion over a decade — a sticking point critics have seized on in dismissing the concept as a pipe dream.

But in a separate document, Sanders proposed a set of ways to cover the plan’s costs including separate new progressive taxes on workers and on employers, raising taxes on the wealthy and imposing a fee on large financial institutions. He also argues that the economic benefits of a healthier population would far outweigh the up-front cost of guaranteeing coverage for all.

“Medicare for All represents a belief that our current system relies far too heavily on individuals’ ability to finance necessary and lifesaving medical care,” Sanders wrote. “Under a Medicare for All system, government would be the chief financier of health care.”

The bill largely tracks with a version Sanders introduced in 2017, laying out an expansion of Medicare over four years that would guarantee every American generous health benefits ranging from hospital care and preventive services to prescription drug coverage — all with no deductibles or co-pays.

The shift would eliminate much of the private health insurance system in favor of government-run coverage, relegating private plans to covering only a small slice of services deemed elective procedures.

“It is not a radical idea to say that there is something fundamentally wrong about the current health care system,” Sanders said during an April 6 campaign rally in Iowa. “This is a dysfunctional system whose function is to make huge profits for the insurance companies and the drug companies, and together we are going to end that.”

In a notable change from 2017, Sanders is now proposing to cover long-term care — a move that brings it in line with similar single-payer legislation in the House led by Rep. Pramila Jayapal. Advocates for the disabled criticized Sanders’ previous bill for failing to support long-term care services crucial for those with disabilities.

“Medicare for All represents a belief that our current system relies far too heavily on individuals’ ability to finance necessary and lifesaving medical care,” Sanders wrote. “Under a Medicare for All system, government would be the chief financier of health care.”

Fourteen Democrats are co-sponsoring the Medicare for All bill, including 2020 contenders Elizabeth Warren, Kamala Harris, Cory Booker and Kirsten Gillibrand — all of whom backed the legislation in 2017.

Yet Sanders still has fewer allies than two years ago, after then-Sen. Al Franken resigned from Congress and with Sen. Jeanne Shaheen dropping off the bill this year. No new senators have signed on since, an illustration of the tough road ahead for a concept that’s yet to gain much traction with the Democratic Party’s more moderate wing.

“There are a number of other bill that have been introduced in this session that were not available in the last session that are probably a more effective way to get more people onto health care,” Shaheen told POLITICO, referring to other Democratic plans that would expand coverage more incrementally. “While the Medicare for All, I think, is an important aspiration, the transition to implement that has not yet been figured out.”

Some Senate Democrats bristled in 2017 at the timing of Sanders’ rollout of Medicare for All, which came even as the party was still fighting Republicans’ efforts to repeal Obamacare and with several senators facing tough reelection bids.

And this current bill comes as the party is trying to highlight its defense of Obamacare in a court challenge brought by conservative-led states, who with the Trump administration are trying to throw out the entire law. Democratic leaders have sought to keep their conference unified behind defending Obamacare as a way to insulate themselves against Republican attacks over more divisive ideas like Medicare for All.

That’s left moderate Democrats are still wary of a plan that’s energized their base yet remains a costly, long-term goal at a time when they control one chamber of Congress and are trying to keep the focus on other aspects of their health care agenda, including bringing down drug prices.

“I don’t think it’s any surprise. This is what he believes in, and he’s running for president,” Sen. Ben Cardin. “I think the next step would be to expand affordability and access, including more competition. I think that’s the next step.”