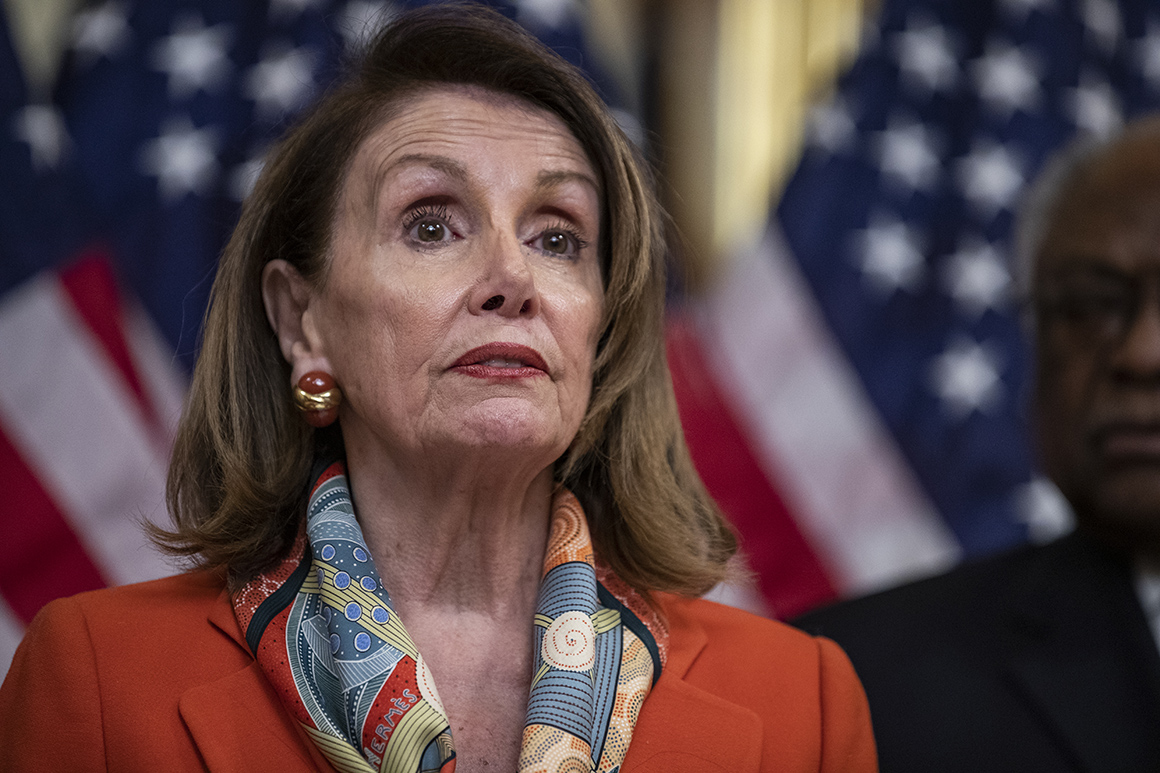 LEESBURG, Va. — Speaker Nancy Pelosi said Wednesday that Attorney General William Barr was “going off the rails,” citing his public testimony over the past two days that appeared to support President Donald Trump’s claims that his campaign was spied on by the intelligence community in 2016.

“How very, very dismaying and disappointing that the chief law enforcement officer of our country is going off the rails,” Pelosi said at the start of Democrats’ annual retreat here.

Pelosi’s comments, which followed an Associated Press interview featuring similarly harsh criticism of Barr, followed two days of appearances by the attorney general on Capitol Hill in which he said he wouldn’t provide Congress with an unredacted version of special counsel Robert Mueller’s report and raised concerns that the government was “spying” on the Trump campaign in 2016.

Pelosi characterized Barr’s actions as an “obstruction of giving the truth to the American people.” She said she had seen no information to suggest inappropriate activity by the nation’s intelligence community against the Trump campaign. Pelosi also expressed dismay at what she said was the insufficient focus of the Justice Department on preventing foreign interference in the next election.

“You would think that every resource in our country would say we want to make sure this doesn’t happen again,” Pelosi said.

In the AP interview, the California Democrat also expressed confidence that the public would see the full report from Mueller’s inquiry — not simply the redacted version Barr has said he expects to release next week — and concerns about the attorney general’s handling of the investigation into Russian interference in the 2016 election.

Earlier Wednesday, during a Senate Appropriations subcommittee hearing about the Justice Department’s budget, Barr suggested to lawmakers that he was gearing up to investigate the origins of the Mueller investigation. Barr sent a four-page memo to Congress last month to notify lawmakers that the special counsel did not find evidence that the Trump campaign conspired with Russia and did not clearly determine whether the president intended to obstruct justice.

The attorney general’s statement heightened partisan tensions ahead of the report’s anticipated release, fueling Democrats’ criticism of Barr for dismissing the possibility of filing charges against the president in his memo despite Mueller’s inconclusive investigation into whether obstruction of justice occurred.

“AG Barr admitted he had no evidence to support his claim that spying on the Trump campaign ‘did occur,‘“ Senate Minority Leader Chuck Schumer (D-N.Y.) wrote on Twitter. “AG Barr must retract his statement immediately or produce specific evidence to back it up. Perpetuating conspiracy theories is beneath the office of the Attorney General.”

The possibility of looking into the probe’s genesis, however, is certain to please Trump, who has repeatedly called the investigation a “witch hunt” that would never satisfy Democrats.

“I’ll be satisfied when we have a new president of the United States who is a Democrat,” Pelosi told The AP.

The speaker stuck to her position on impeachment, urging those calling for it to wait for the release of Mueller’s final report.

Barr has promised to release a redacted version of the full report early next week, when his team will have had sufficient time to remove top-secret grand jury information and details falling into three other categories that he outlined in his letter. Until then, Pelosi said, it is “not worth it” to seriously pursue impeachment proceedings.

“We will see it,” she said, referring to the full results of the investigation.

Barr has also said he would testify before the Senate and House Judiciary committees on May 1 and May 2 for inquiries about the Mueller probe.