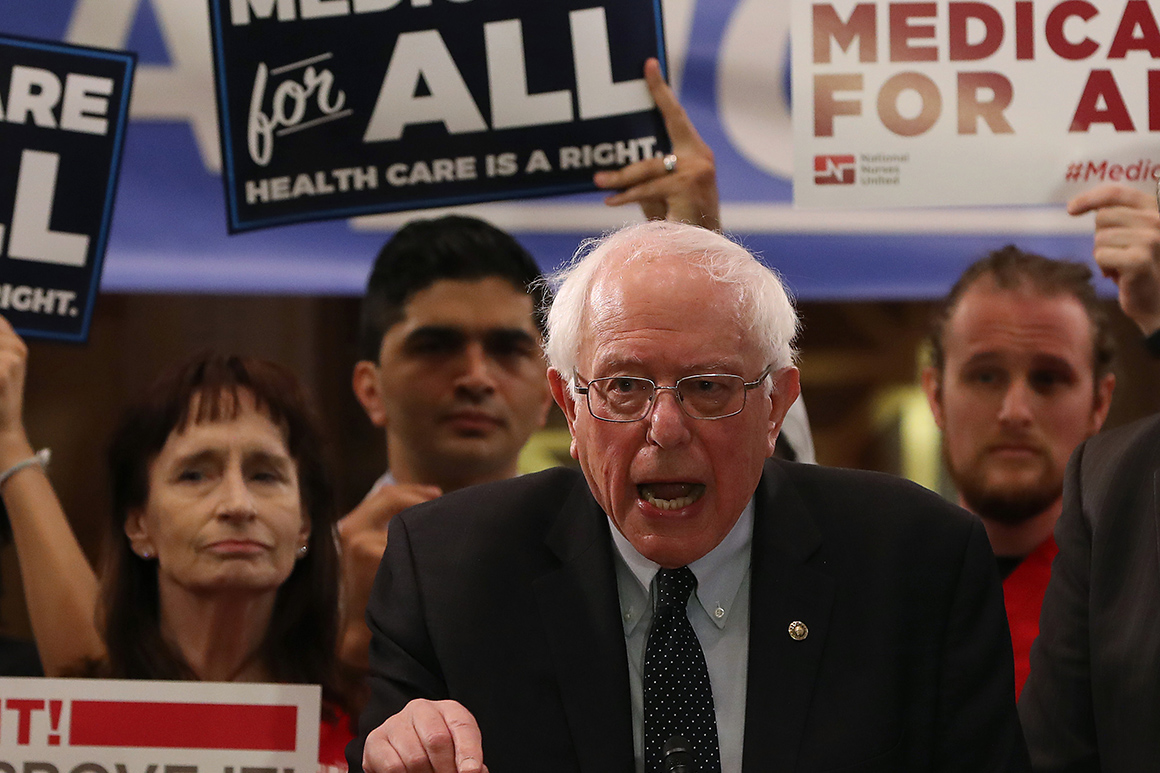 The Medicare for All bill unveiled by Sen. Bernie Sanders on Wednesday would provide universal health care coverage, swallowing both the current public programs like Medicare and Obamacare, as well as private health insurance, into one new unified system.

Progressives embrace the plan because the coverage is free, streamlined and fair. They believe it will save money by squeezing out the profit-driven model of care. Opponents counter that one-size-fits-all, government-run health care would balloon the country’s health spending and limit access to care — or both.

Medicare for All legislation in the House and Senate does more than cover people. The bills swiftly transform the entire $3.7 trillion health care system, touching on everything from building primary and rural health care capacity to addressing socioeconomic disparities to getting all health care providers to use the same electronic billing format. And they wade into some of the biggest political fights of our era, including abortion, drug prices and immigration.

Here are 14 elements of the bills that you may not know were in there.

Any “resident” of the United States is entitled to all the services covered by Medicare for All, and the head of HHS is tasked with writing rules on who counts as a resident. The legislation says that medical tourism, travel to the U.S. for the sole purpose of seeking no-charge medical care, will be banned. (Foreigners could presumably come and pay for care.)

But the bill does not explicitly rule out coverage for undocumented immigrants. That’s a touchy issue given the intensity of the immigration debate today — even a decade ago, it was the topic that provoked Rep. Joe Wilson’s infamous “You lie!” outburst during President Barack Obama’s 2009 health care speech to a joint session of Congress. (The bill text is intended to be inclusive of undocumented immigrants, even though HHS writes the final rules.)

2. The old and the young will get covered first.

People younger than 19 and older than 55 will be enrolled first in the new Medicare for All program after one year, though they can choose to remain on their current insurance during the transition period — two years in the House bill, H.R. 1384 (116), and four in the Senate version. Everyone else can buy into a Medicare for All option on the Obamacare insurance marketplaces one year after the bill is passed, and employers can also buy a public plan for their employees during this time. After the transition period ends, everyone will be automatically enrolled in the new system.

3. Abortion is covered — even if the bill doesn’t quite come out and say that.

Free coverage of “comprehensive reproductive, maternity, and newborn care” is included in the House and Senate bills. Though the word "abortion" does not appear anywhere in the text, its authors have confirmed that it’s covered. The bill also notes that restrictions on federal funding for reproductive health services — namely, the Hyde Amendment’s longstanding ban on federal funding for abortion — would not apply to the new Medicare for All Trust Fund.

The bill does not address any limit on when in a pregnancy an abortion could occur, but it does leaves room for restrictions by noting that the HHS secretary can determine what services are “medically necessary or appropriate." (The Supreme Court has upheld restrictions after fetal viability.)

Long-term services and supports — both in institutions like nursing homes and, wherever possible, in home- and community-based settings — would be covered. Medicaid already pays a big share of the cost for low-income people or people who have spent most of their savings on care. But this would be a significant expansion of government health spending, and that expense is why Congress has never been able to come up with a better system for long-term care despite the demand and aging population.

The Congressional Research Service estimated that the cost of long-term care was $366 billion in 2016 — not counting the hours put in by unpaid family caregivers, which is billions of dollars more. The House bill would cover all long-term care; in the Senate version, Medicare for All would cover home- and community-based options, and a remaining portion of Medicaid would finance nursing homes. There are some policies to be worked out here. It’s possible that some form of private long-term care insurance could still have a role for those who get institutional care under Medicaid, a congressional aide said.

The HHS secretary will choose which complementary and integrative medicine practices (sometimes called alternative medicine) to include in the benefits package, as well as what “experimental” treatments to cover. HHS would also “identify” and “overcome” barriers to incorporating such care. Some insurers now do cover some such treatments, such as acupuncture, but this would potentially broaden the scope sharply. Recommendations would draw on the advice of assorted experts in complementary medicine plus the FDA commissioner.

6. Nurse-to-patient ratios could be mandated. (House version only)

The National Nurses United labor union has been a major driver for Medicare for All, and the bill includes multiple provisions addressing one of its biggest priorities: limits on the number of hospital patients a nurse may care for at a time. Under the bill, HHS can dictate standards that may include “mandatory minimum safe registered nurse-to-patient staffing ratios and optimal staffing levels for physicians and other health care practitioners.” The bill also requires providers to report their nurse-to-patient ratios to HHS each year. Hospitals have long fought these mandates, arguing it would unnecessarily drive up costs, while the nurses unions argue that the under-staffing puts patients at risk. Only one state, California, has a staffing ratio law on the books.

7. It will be illegal for private insurance to cover what Medicare for All covers.

The bill would all but abolish the private insurance market by banning employers or insurers from offering plans that cover the same services as the national single-payer system. Many other countries with government-run universal health plans allow supplemental private insurance to cover things like dental care, but because the benefits outlined in the Medicare for All bill are so generous, private health insurers would only be able to offer supplemental services like cosmetic surgery.

The bill does, however, allow providers to enter into private contracts with patients for services that are covered by Medicare for All as long as the patient pays the whole cost out of pocket and neither patient nor provider seeks reimbursement from the government.

8. Health care institutions would be subject to “global budgeting.”

Hospitals, skilled nursing facilities, federally qualified health centers, home health agencies and dialysis centers would operate under a global budget. That’s basically a fixed fee, not unlike a block grant, that would cover all approved patient care, including drugs, devices, imaging and more. There would be a separate review process for capital expenditures, with an emphasis on more equity for underserved areas. The budget would be set by region and adjusted quarterly.

9. Doctor payments would be overhauled.

Physicians could be salaried by hospitals or similar facilities as part of the global budget, or they could get paid per service they provide, under a new federal pay scale. Federal pay-for-performance programs would end, as would value-based purchasing, the current meaningful use Electronic Health Record rules, and the other payment systems for Medicare such as the Merit-based Incentive Payment System that was part of a 2015 law overhauling Medicare physician pay.

The United States already has two examples of “socialized medicine” — for the nation’s veterans and tribal members — and those would remain untouched. Veterans and Native Americans can, however, opt to receive care through Medicare for All. Any provider already qualified to provide health care services through the Department of Veterans Affairs or Indian Health Service is also automatically approved to participate in Medicare for All.

Additionally, under the House bill, each regional office tasked with setting budgets and overseeing health care providers would have a senior official representing that area’s Native American population.

11. The government would bargain for cheaper drugs.

The government would negotiate directly with companies on the price of pharmaceuticals, medical supplies, medical technologies and medically necessary equipment. If they can’t reach an agreement, the HHS secretary can set the price at the rate the VA currently pays — typically far cheaper than private coverage. The system will also prioritize lower-cost generic medications “to the greatest extent possible” and discourage the use of “excessively costly medications,” though that’s not defined by the legislation.

In the House version, the government has an additional option. It if can’t negotiate an appropriate price for a covered drug, it can take the exclusive patent or clinical trial data and use it to manufacture the drug in-house as long as the company is given “reasonable compensation.”

12. Some would get free rides to medical appointments.

Low-income and disabled people would get free transportation to medical care — addressing what’s known as a “social determinant of health.” Some government and private health plans already cover some transport for doctors’ appointments, dialysis sessions and the like.

The thinking is that if people get timely care, they are less likely to end up in hospitals — and an ambulance costs a whole lot more than a van or car ride. But this proposal appears broader than current practice — and runs counter to CMS Administrator Seema Verma’s offer for state Medicaid programs to cut some non-emergency transportation services.

13. The two-year wait for Medicare disability coverage would be abolished.

Medicare is usually thought of as health care for people 65 and older, but it also covers younger people with disabilities who meet certain criteria. But even after qualifying for Social Security Disability Insurance, people currently have to wait 24 months for the Medicare coverage to kick in. That would no longer be true under Medicare for All.

14. It cracks down on conflicts of interest.

The conflict of interest rules are much stricter than those that govern the health care industry today. Board members, executives and administrators would be barred from being compensated by, investing in, or being on the board of "any entity that contracts with or provides items or services, including pharmaceutical products and medical devices or equipment, to such provider.”