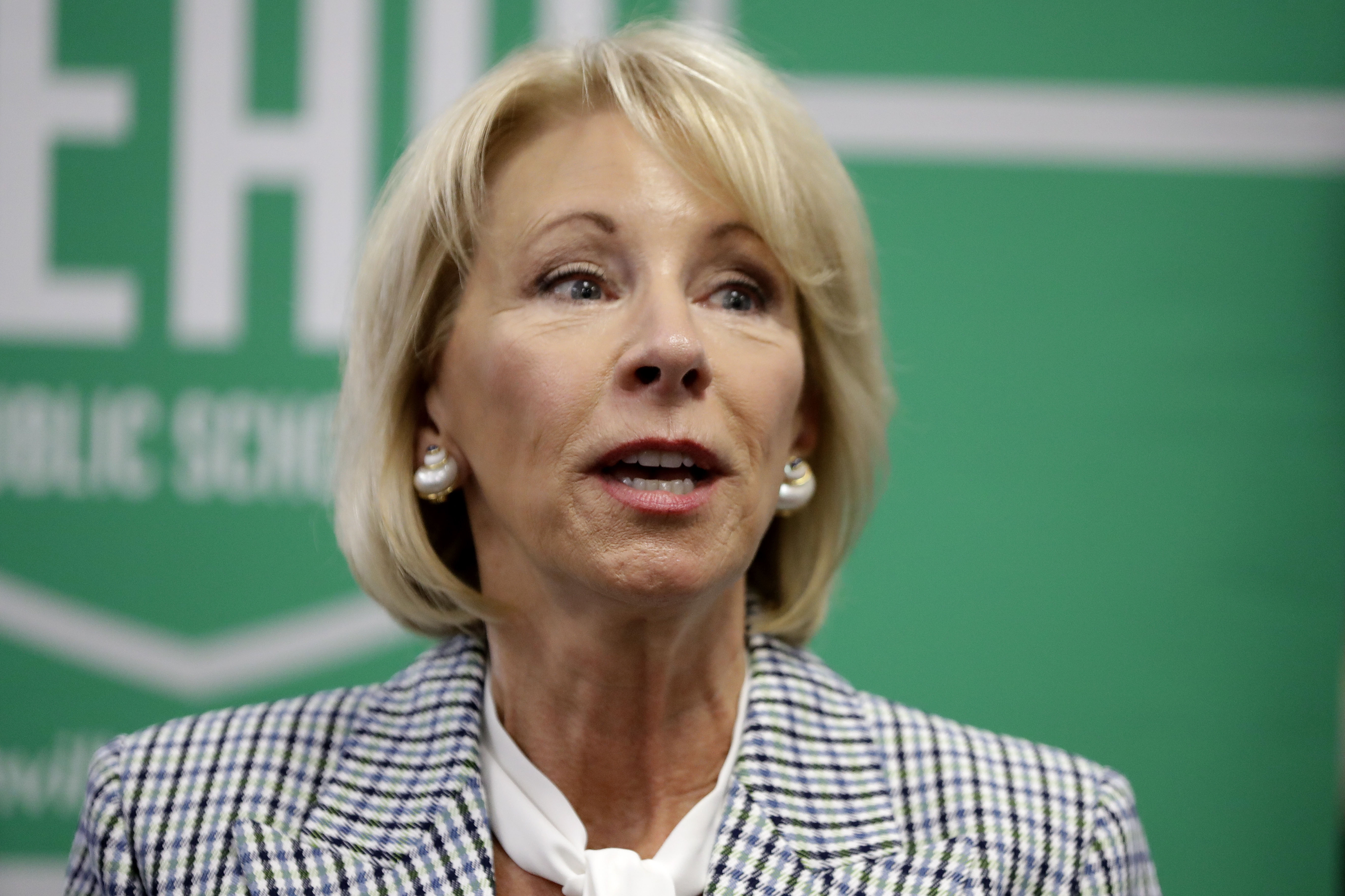 Education Department attorneys said last year that the agency could block states from using federal grants to buy guns for schools, even as Secretary Betsy DeVos claimed she was powerless to do so, according to an internal agency memo released by House Democrats on Wednesday.

The 14-page memo was displayed during a tense back-and-forth between DeVos and a freshman lawmaker and former teacher, Rep. Jahana Hayes (D-Conn.), during an education committee hearing. It was the first time DeVos has appeared before the panel since Democrats took control of the House.

DeVos announced last year that she would not stand in the way of states that wanted to use federal education grants to buy guns after Democrats implored her to prohibit such purchases. She said at the time that “Congress did not authorize me or the Department to make those decisions.” President Donald Trump had touted the idea of training and arming teachers after 17 people were slain at Marjory Stoneman Douglas High School in Parkland, Fla.

But on Wednesday, Hayes grilled DeVos over the internal department memo that said the secretary did have the power to bar her agency’s funding from being used to buy guns.

DeVos in response said that federal grants to states for student support services under Title IV of the Every Student Succeeds Act require states decide how to use those funds. “We have totally respected that particular setup,” she said. “We have not advocated for or against.”

Hayes pointed to emails from DeVos’ staff that discuss the decision memo on the department’s interpretation of the law. Democrats on the House Education and Labor Committee released a copy of the memo, which they said they obtained from a “third party source.”

“In light of the contents of this memo, you have the ability to make a decision,” Hayes told DeVos. “Your silence is a decision. You have the authority to say that we cannot use federal funds to arm teachers.” She pressed DeVos on whether she would use that authority.

“This is a matter for states and local communities,” DeVos said.

“You have the authority to do it,” Hayes responded, holding up the memo. “Read your memo.”

DeVos responded: “Congress has the authority to make that decision.”

Liz Hill, a department spokesperson, said that the document “was not a decision memo presented to the secretary and we can’t verify the authenticity of the document.”

She added: “The law is very clear that this issue is for states to decide and the secretary has been very clear she is leaving it to the states.”

The question of whether DeVos should block states from buying guns was thrust into the spotlight last year when The New York Times reported that the Education Department was weighing a decision on the issue. The department had received requests from Oklahoma and Texas on whether they could use federal funds to train and arm “school marshals.”

Democrats at the time accused DeVos of violating the intent of the federal education grant program, which they said was never meant to help arm teachers or school districts.

Democratic lawmakers sought but failed to include language in an Education Department spending bill last year that would prohibit states and schools from using federal dollars to purchase guns. Rep. Rosa DeLauro, (D-Conn.), the chairwoman of the House appropriations subcommittee overseeing education, has said she plans to renew that fight this year.

Trump administration officials last year sought to downplay that they were making any new decision on the issue, saying they were merely restating existing flexibility that states have to use federal education grants.

But the newly disclosed memo reflects an apparently robust discussion and debate within the Trump Education Department on guns. It says that the Education Department had not previously considered whether it could fund the purchase of firearms in schools and that the relevant federal law was silent on the question.

“If the Secretary were to permit the use of Title IV, Part A funds for the purchase of firearms, it appears that it would be the first time a Federal agency has authorized the purchase of weapons for school personnel without specific statutory authorization,” the memo says. “It is reasonable for the Secretary not to allow this use of funds absent specific Congressional authorization, and it is unlikely that this interpretation would be subject to a successful legal challenge.”

The July 16, 2018 memo, written by Jason Botel, a Trump political appointee, ultimately recommended a “compromise” solution under which the Education Department allowed funds to be “used to train school staff on the use of guns” but prohibited funds from being used to actually purchase guns.

Such a middle ground position, Botel wrote, “would support one necessary component of arming school staff but not expose the Department to the political liability were the funds to be allowed to purchase weapons themselves.”

But someone appears to have selected the most permissive option on guns. The version of the memo released by the committee contains a handwritten “x” next to “YES, funds may be used to purchase firearms for teachers and to train teachers on the use of firearms.” It wasn’t clear who made that marking. The memo was addressed to Kent Talbert, a senior adviser to DeVos.

A set of emails back and forth among DeVos’ advisers that discuss the memo and how they should address the issue of funding guns in schools were obtained under the Freedom of Information Act by a coalition of groups that favor tightening federal gun laws.

The coalition, led by Democracy Forward, sued the Education Department last year to turn over those documents. They include the Giffords Law Center to Prevent Gun Violence, Southern Poverty Law Center and the American Federation of Teachers.

“Betsy DeVos can’t hide from the truth any longer, and she can’t keep ducking her responsibility to help keep our schools safe,” Adam Skaggs, the chief counsel at the Giffords Law Center, said in a statement. “The gun violence epidemic has made students afraid to go to school and left parents wondering if they’ll see their children at the end of the day, but Secretary DeVos has just thrown up her hands and said ‘Not my job.’”

Nicole Gaudiano contributed to this report.