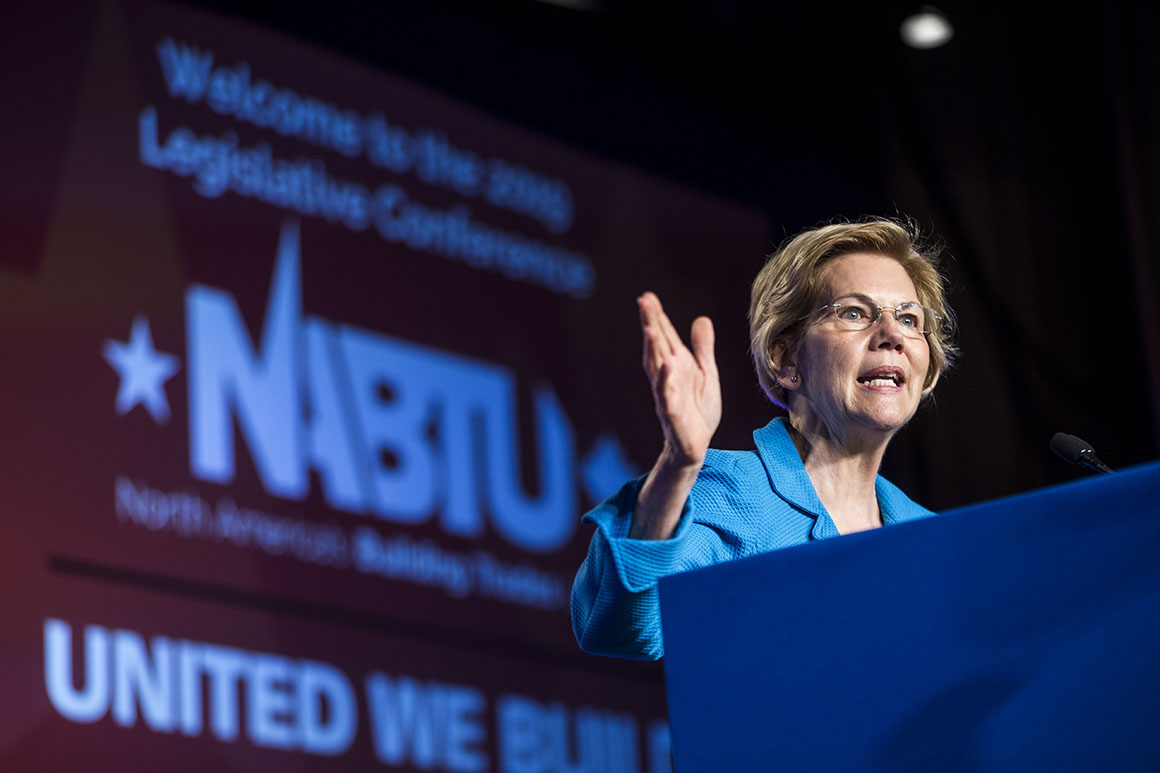 Nearly half the field of Democratic presidential candidates addressed union leaders Wednesday in Washington, seeking to outdo one another on their working-class credentials.

For Sen. Elizabeth Warren (D-Mass.), it was having a union crane operator as a brother. For former Colorado Gov. John Hickenlooper, it was getting laid off as a geologist and starting anew as a brewpub owner. For Sen. Amy Klobuchar (D-Minn.), it was her grandfather saving money in a coffee can to send her father to college, and her father’s struggle with alcoholism later in life.

“I saw him sink to the lowest valleys because of his struggles,” Klobuchar said. “He got three DWIs, and it was on the third DWI that he finally had to go and get treatment.“

“Because of his work, because of people that worked with him,“ she said, “just like people work with you, he was pursued by grace, and his life changed.”

In speeches at the North America’s Building Trades Unions conference, nine current and prospective candidates highlighted their alignment with unions on trade, infrastructure and strengthening organized labor. They also sought to demonstrate their ability to attract rank-and-file workers with homespun folksiness and real-world grit.

The majority of candidates — who collectively have spent decades in Washington — eschewed their experience on Capitol Hill in favor of earlier accomplishments on the local level. Sen. Cory Booker (D-N.J.) spoke of his home state and working with unions as Newark mayor.

Warren, who lives in Cambridge, Mass. and used to teach at Harvard, discussed growing up in Oklahoma.

“You are my kind of people,” Warren said. “I grew up out in Oklahoma in a paycheck-to-paycheck family, so I come from a family that honored hard work.”

“When I was growing up my daddy had a lot of jobs, and he ended up as a janitor,” Warren added. “My mom worked a minimum wage job at Sears.”

Many of the candidates avoided taking direct jabs at President Donald Trump. The NABTU membership is viewed as more conservative than other unions, despite endorsing Hillary Clinton in 2016. A number of major unions are waiting longer to make endorsements is 2020, burned by members who supported Sen. Bernie Sanders (I-Vt.).

“We lost the last election, but I was one of those guys sitting there saying, ‘Hey, I’m not happy with how he ran, I’m not happy with the demeaning and the degrading language, but maybe when he comes into office he’s going to come right out of the blocks and do what we know needs to be done,’” Booker said.

One prospective candidate, former Virginia Gov. Terry McAuliffe, did strike a more combative stance toward Trump. McAuliffe noted how he once wrestled an alligator to raise money for former President Jimmy Carter‘s campaign.

“Of all the candidates running, how many have actually wrestled a 280-pound, eight-foot alligator for a political contribution for $15,000?” said McAuliffe, who added he’s close to making a decision on whether to run. “If I can wrestle and alligator, I can sure as hell wrestle Donald Trump.”