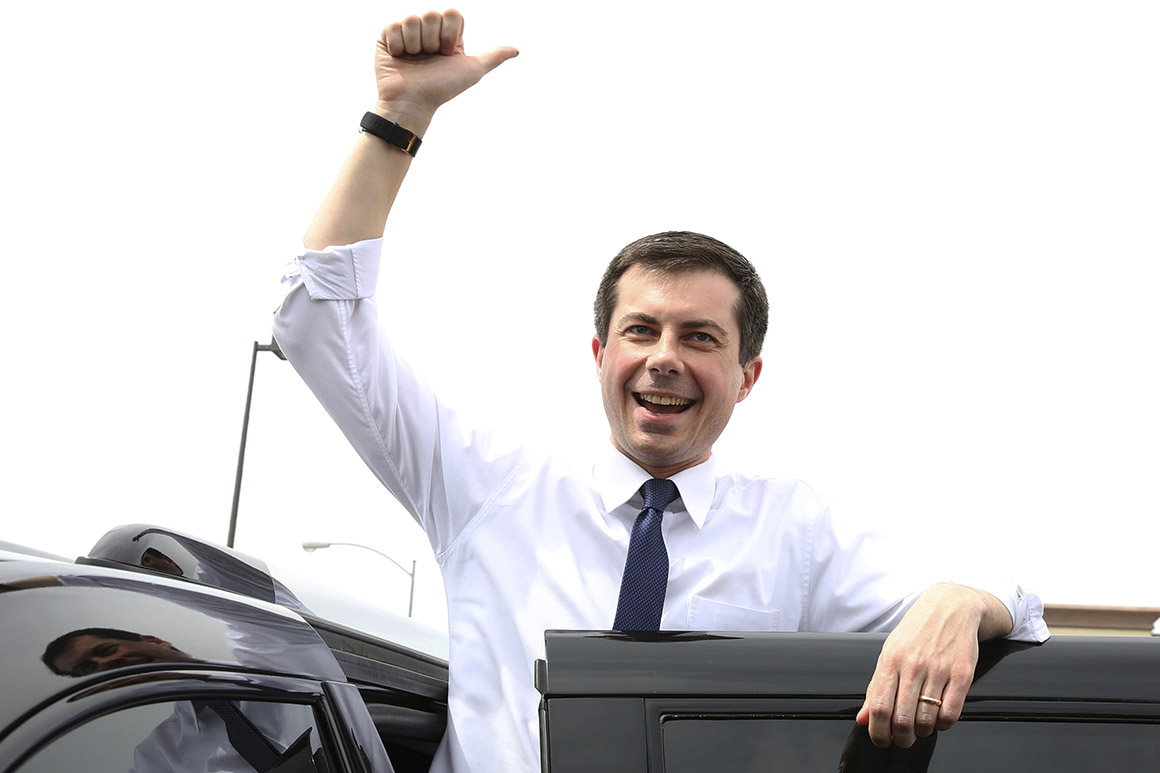 He’s called the Green New Deal a “sound framework” for confronting climate change. He’s called for abolishing the Electoral College and has endorsed the idea of single-payer healthcare. And he’s openly gay.

But Pete Buttigieg is getting rare praise from some unlikely voices — conservatives.

Right-leaning pundits and politicians have taken notice of Buttigieg’s rising popularity, an ascent that began in early March after the South Bend mayor’s widely heralded CNN town hall performance, which garnered a sprinkling of compliments from Republicans. In the time since, a number of conservatives have shown a growing interest in Buttigieg and at times offered positive remarks about the Democratic candidate, a treatment quite the opposite of what most of the mayor’s primary challengers are receiving from the GOP.

Conservative commentator Ben Shapiro, for instance, called Buttigieg “nice and refreshing” for his willingness to engage with those on the other side of the aisle.

New York Times columnist David Brooks described Buttigieg as “smart, modest and self-effacing,” portraying the gay millennial veteran with degrees from Harvard and Oxford as a deft politician with a unique background who could surprise people.

Newt Gingrich, former GOP speaker of the House, said Republicans should start paying attention to the mayor, who “may be the unknown outsider who grows into authenticity.” A Commentary op-ed celebrated the so-called libertarian ideals Buttigieg brought to the race.

Even talk show host Rush Limbaugh, an avid Trump supporter, said after watching Buttigieg’s town hall that he saw “no radicalism” in the “personable” candidate, whom he said would “make mincemeat” out of his primary challengers in a debate.

The comments come despite severe policy disagreements. With grand plans that include a proposal to overhaul the Supreme Court and plans for automatic voter registration, Buttigieg is far from the most moderate Democratic contender.

That’s true, said Shapiro, who has stated he will almost certainly vote for Trump in 2020. Republicans aren’t swayed by Buttigieg’s policy. Some simply find him interesting or likable.

“There is a big sense that he, unlike a lot of the Democrats, is actually not ensconced in the belief system that says everyone who disagrees with him is a bad person,” Shapiro said in an interview with POLITICO, adding that he’s asked the mayor to appear on his radio show but hasn’t received a response yet.

Lis Smith, Buttigieg’s communications adviser, acknowledged that his campaign has noticed the buzz from the GOP. It hasn’t affected their strategy, she said, though she added Buttigieg will at some point during the primary make appearances “with outlets that traditional Democrats ignore.”

That’s not to say Buttigieg shies away from statements that could alienate conservative voters.

“It’s very clear where he stands on issues, where he stands as an unabashedly progressive Democrat,” Smith said. “It’s more a matter of his style and approach, that he treats people with respect and he doesn’t engage in the cheap shots that have come to dominate Washington in recent years.”

It’s unclear if Republicans’ salutes to Buttigieg are earnest or attempts to siphon support from Democratic front-runners — probably a little bit of both, Washington Examiner Executive Editor Seth Mandel said.

Nor is it clear if rank-and-file conservatives feel the same as the pundits as they watch the mayor of a mid-sized Midwestern city try to make the jump into the nation’s highest office. Buttigieg has a background in business and the military, regularly attends church and lacks enemies in the national political arena — all qualities that could appeal to right-leaning voters.

There’s a good chance that may not matter this election cycle, Shapiro said.

“I don’t think he’s got a real path to the nomination,” he said, noting that big names like Joe Biden, Bernie Sanders and Kamala Harris will likely secure large blocs of the party’s voters.

Mandel concurred, though he said clearly Buttigieg is “a rising star in the Democratic Party, so he’s not going away anytime soon.”

“In fact, the primary is probably his biggest obstacle,” he said. “He’s the sort of candidate that probably is more formidable in a general election than he would be in a knock-down, drag-out primary.”

Buttigieg has touted his ability to work across the aisle in Indiana. He had a cordial working relationship with former Republican Gov. Mitch Daniels rooted in the pair’s common goal to boost the South Bend region’s economy.

In his memoir, “The Shortest Way Home,” Buttigieg recounts a day in 2016 when he called then-Gov. Mike Pence’s community-focused economic development plan “visionary,” and Pence paid back the compliment by saying South Bend was “so blessed to have an energetic, innovative, forward-looking, creative mayor.”

Whether this commitment to bipartisanship can translate to the federal level is another challenge altogether. On the campaign trail, Buttigieg has been a vocal attacker of Pence, who the mayor has condemned vehemently for signing Indiana’s Religious Freedom Restoration Act in 2015 — a piece of legislation that drew national controversy from people arguing it could be used to discriminate against LGBT individuals — and for a number of federal policies enacted during his tenure as vice president.

Buttigieg has taken some shots at other individuals and blocs on the right, too. In a “Meet the Press” interview Sunday, he said he received backlash for saying he was frustrated by the “hypocrisy” of evangelicals who used religion to justify voting for Trump despite the president’s sexual ethics, referencing the hush-money payments made to adult film actress Stormy Daniels during the 2016 campaign.

As the Buttigieg buzz continues to grow, some of the president’s GOP advocates have started to launch attacks at the Democratic wildcard candidate — perhaps a sign that they aren’t completely ruling out his chances.

In just the last two weeks, Buttigieg announced he’d raised more than $7 million in his first months on the campaign trail and leapfrogged other 2020 contenders in a handful of polls. Media coverage of the mayor boomed, and people scrambled to explain why his candidacy suddenly seemed to have gone viral.

Fox host Laura Ingraham spent much of an eight-minute segment on Buttigieg last week bashing the media for elevating the young candidate.

“As they did with Obama, the media is attempting to take a novice with limited experience and wrap him up in a warm, fuzzy personal narrative,” she said.

She also warned voters not to be “fooled by the carefully curated public image,” railing against Buttigieg’s progressive policy stances.

“The ‘cool fact’ that ‘cool Pete’ speaks seven languages doesn’t change that socialism doesn’t work in any of them,” Ingraham said.

The Washington Examiner last week published an article that labels Buttigieg’s father as “a Marxist professor” who, it implied, influenced the politics of his son.

Limbaugh picked up on the article, claiming Buttigieg grew up “learning Gramsci, Marx and Engels” instead of about the U.S. founding fathers, demurring from his relatively positive characterization of the mayor made just a few weeks prior.

“Keep an eye on the guy,” Limbaugh warned, “because he’s somebody that can make a lot of people think that he is what he isn’t.”

Buttigieg hasn’t even officially announced his presidential bid yet — he plans to do so Sunday in South Bend. With the primaries a year away, there is plenty of time for the Buttigieg’s time in the spotlight to be one that comes and goes, a phase experienced by many candidates over the years. But there’s also still time for him to be one of the few initial outsiders that climbs to the front of the pack, not all that unlike Trump’s rise on the right three years ago.

“He worries me from a Republican standpoint,” Hewitt said, likening the mayor’s ability to hold the attention of an audience to that of the man he’s hoping to unseat.

Smith, on the other hand, painted the Buttigieg boom as a reaction to Trump’s ascent, not some sort of replica of it.

“After the horror show in Washington, where you have a president who engages in gross political attacks against his opponents, people maybe are looking for something completely different,” Smith said.

At this early point in the campaign, she added, the chatter from conservative pundits — positive or negative — “doesn’t keep us up at night.”