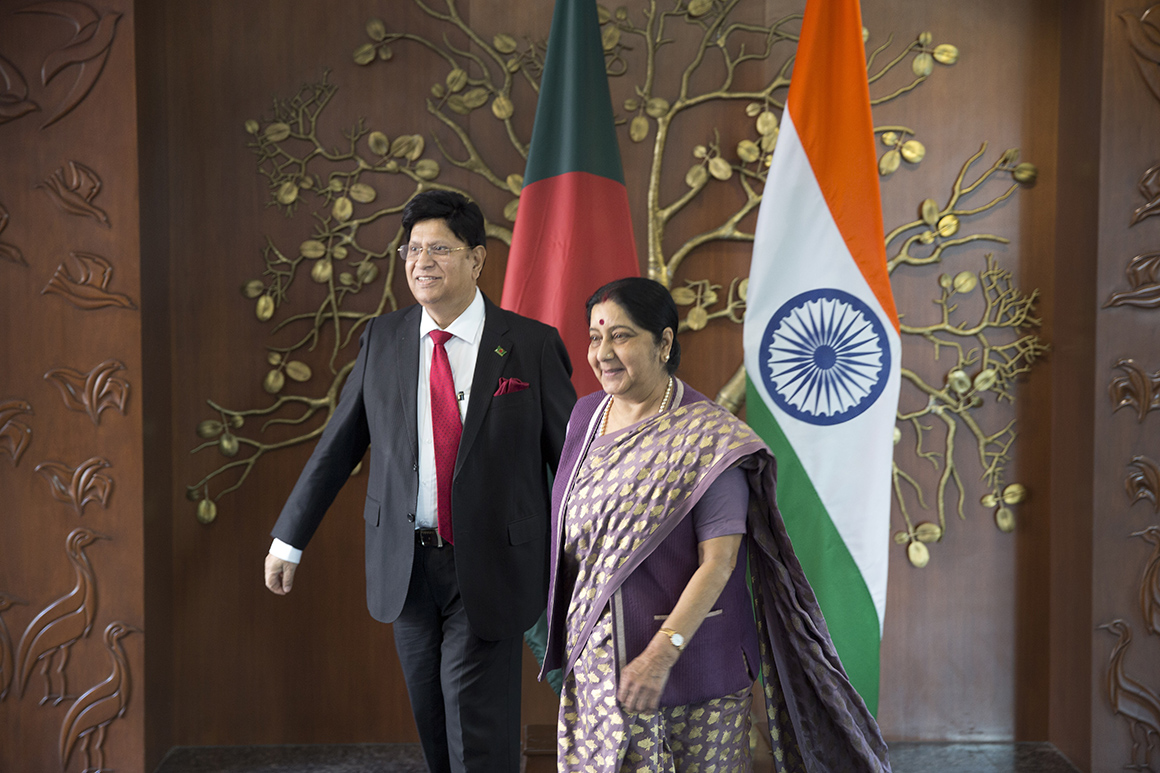 The United States needs to raise pressure on Myanmar to resolve a massive refugee crisis following what many officials and human rights researchers around the world believe was an act of genocide, a top foreign diplomat urged this week.

In an interview with POLITICO in Washington, Foreign Minister A.K. Abdul Momen of Bangladesh also called on President Donald Trump, whom he called a “magic man,” to abandon his desire to limit immigration to the United States, noting that the country was built on the “toil and blood” of expatriate communities.

“He should follow the values and principles of the United States of America,” said Momen, who added that Trump should not build a “wall” on America’s southern border. “America is great because it is the home of all the persecuted people. The Trump administration should be broad-minded rather than a narrow looking inward.”

Bangladesh has been dealing with an influx of hundreds of thousands of Rohingya Muslim refugees since late August 2017, when a crackdown by the Myanmar military killed numerous members of the long-persecuted minority group and forced others to flee their homes.

Bangladesh has tried to push Myanmar, also known as Burma, to take the refugees back. But Myanmar’s pledges to do so have failed to result in anything significant. And many of the Rohingya are refusing to return, fearing even more persecution from a country that has stripped them of their citizenship and legal rights for decades.

Momen praised the Trump administration for giving hundreds of millions of dollars in aid to help the Rohingya now in Bangladesh. But he said Washington should ask its Asian allies, such as Japan, to step up their contributions as well, even if it meant irking China, a major ally of Myanmar.

He also said the U.S. should impose more sanctions on Myanmar military leaders and others to hold the country accountable for its actions against the Rohingya.

“The U.S. can do more,” Momen said, adding that the U.S. should also do some “trading” with China so that it will support United Nations moves aimed at helping the Rohingya.

The foreign minister noted that U.N. officials, among others, have used terms like “genocidal intent” in describing what Myanmar’s Buddhist-dominated military did to the Rohingya.

“All the indications are that it is close to a classic case of genocide,” said Momen, who spoke to POLITICO on Tuesday.

But the foreign minister declined to say whether he believes that the Trump team should also declare what happened to the Rohingya a “genocide” — a term that in theory could have legal consequences. “This is their decision,” Momen said, repeatedly sidestepping the question.

The Trump administration has declared the Rohingya crisis an “ethnic cleansing,” a term with little meaning in international law. The administration also previously declared that Christians, Yazidis and other groups were the victims of genocide at the hands of the Islamic State terrorist group in Syria and Iraq.

However, Secretary of State Mike Pompeo, who met Momen this week, has refused to take a position on whether the Rohingya Muslims faced a “genocide” or “crimes against humanity.” He has insisted that the situation is complicated and that he’s still looking into it.

But it is still unclear why Pompeo is taking so long — he’s been at Foggy Bottom for nearly a year and the Rohingya exodus from Myanmar happened months before he took over. One potential explanation is that he may worry that accusing Myanmar of genocide will further push the country into China’s arms.

During recent hearings in the House and the Senate, including one on Wednesday, lawmakers have pressed Pompeo to take a position on the issue. In December, the House overwhelmingly passed a resolution declaring the Rohingya crisis a genocide.

In mid-March, a State Department official, Michael Kozak, startled human rights experts when, in response to questions about Myanmar, he declared that a genocide designation is a “messaging management tool” that “has no legal effect.“

It was an odd claim given that genocide is a crime defined under international law and that, in theory at least, countries have a duty to try to prevent it.

“The usual reason you say something like that is you’re trying to call attention to it,” Kozak told reporters. “Our feeling is we’ve called plenty of attention. What we’re trying to do now is to get people to take action and put more pressure on.“

Myanmar has downplayed or denied the allegations of genocide, claiming that it was only cracking down on terrorists within the Rohingya population. Experts, however, say such elements are few among the Rohingya and pose little threat to the Myanmar government. They warn, though, that without a resolution to the refugee crisis, radical elements could emerge among destitute Rohingya refugees.

Momen said Bangladesh has an overall good relationship with the Trump administration and appreciates that the U.S. doesn’t interfere too much in his country’s internal affairs.

He praised Trump for winning the 2016 U.S. presidential election.