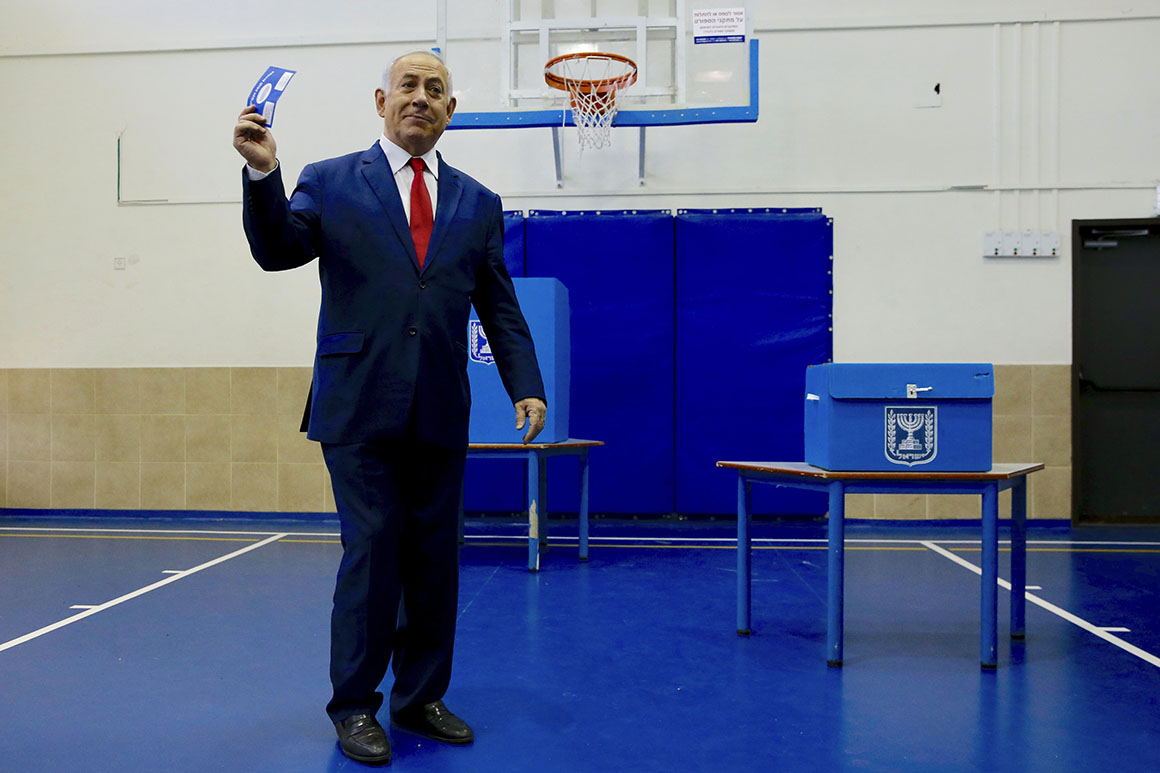 JERUSALEM — Israeli Prime Minister Benjamin Netanyahu and his main challenger, former military chief Benny Gantz, were locked in a neck and neck race Tuesday as exit polls showed no clear winner in an election that was seen as a referendum on the long-serving leader.

With final results hours away, the early indications were that Netanyahu suffered a setback by failing to score a decisive victory. The 69-year-old prime minister’s fate is clouded by a series of corruption investigations.

Two Israeli TV stations showed Gantz’s Blue and White Party with a narrow lead over the Likud. Channel 12 TV had Blue and White with 37 seats to Likud’s 33 seats, while Kan TV put Blue and White ahead 37-36. Channel 13 had the two parties deadlocked with 36 seats apiece.

With both parties far short of a majority in the 120-seat parliament, they would have to search for smaller ideological allies to cobble together a majority.

The Kan and Channel 13 polls projected Likud and its hard-line allies to have the upper hand in being able to form a coalition, while a Channel 12 showed them with 60 seats apiece.

The mixed results provided each side with an excuse to declare victory.

“We won! The Israeli public has had their say!” the Blue and White party said. “These elections have a clear winner and a clear loser.”

Tap to unmuteIt urged the Israeli president, who is charged with selecting the prime minister, to “call on the winner to form the next government. There is no other option!”

“I thank the citizens of Israel for the trust. I will already begin building a right-wing government with our natural partners tonight,” he said.

Yohanan Plesner, a former lawmaker and head of the nonpartisan Israel Democracy Institute, called the close and conflicting exit polls “an unprecedented situation.”

“We’ve had elections before where he didn’t know the results but here it is even messier,” he said.

Several parties, including the Arab Balad list and the ultranationalist “New Right,” were on the cusp of winning the needed 3.25% of the votes to enter parliament. The fate of these small parties could play a key role in determining who becomes prime minister.

The election included several other surprises. Exit polls all projected the iconic Labor party, which ruled the country for its first 30 years, tumbling to single digits in the parliament.

Zehut, an iconoclastic party that combined an ultranationalist ideology with libertarian economic positions and calls for the legalization of marijuana, had appeared poised to emerge as the Cinderella story of the election. But the exit polls showed it falling short and not entering parliament.

The election has emerged as a referendum on his 13 years in power, with the existential questions facing Israel rarely being discussed in the campaign.

Netanyahu has been the dominant force in Israeli politics for two decades. His campaign has focused heavily on his friendship with President Donald Trump and his success in cultivating new allies, such as China, India and Brazil.

But corruption scandals have created some voter fatigue, and in recent days Netanyahu has vowed to annex Jewish West Bank settlements if re-elected — a prospect that could doom already-slim hopes of establishing a Palestinian state alongside Israel, which he has wavered on.

In Gantz, he encountered the rare opponent who can match his security credentials. Along with two other former military chiefs on his ticket, Gantz has attacked Netanyahu for failing to halt rocket fire from the Hamas-ruled Gaza Strip. The telegenic Gantz, who has been vague on key policy fronts, has presented himself as a clean, scandal-free alternative to Netanyahu.

As Tuesday wore on, Netanyahu delivered increasingly impassioned pleas for support via Facebook.

In videos, he repeated his signature warning that if supporters failed to vote for Likud, they’d wake up to a “leftist” government led by Gantz. Netanyahu said such a scenario is backed by the centrist party’s “secret deal” with Arab factions.

His tactics, however, had the effect of siphoning seats from his nationalist allies.

Arab turnout was seen as a major issue.

Netanyahu’s campaign against Arab politicians, together with the new alliance with anti-Arab extremists and the passage of last year’s contentious nation-state law, which enshrined Israel as the homeland of the Jewish people alone, have deepened calls for an election boycott in Arab communities.

The Palestinian issue has been largely sidelined in a campaign that has been long on scandal and short on substance. While Gantz has expressed an openness to resume contacts with the Palestinians, his positions were vague and did not express support for Palestinian independence.

“They want their occupation to be endless,” he said.

Even if re-elected, Netanyahu could have a difficult time governing. Some of his allies have indicated they will no longer back him if formal charges are filed.

Israel’s attorney general has recommended indicting him on bribery and breach of trust charges in three separate cases. Rivals have also begun to question a deal in which Netanyahu reportedly earned $4 million on a German submarine sale to Egypt by owning shares in one of the German manufacturer’s suppliers. Netanyahu denies any wrongdoing and says the accusations are part of a liberal media’s orchestrated witch hunt.