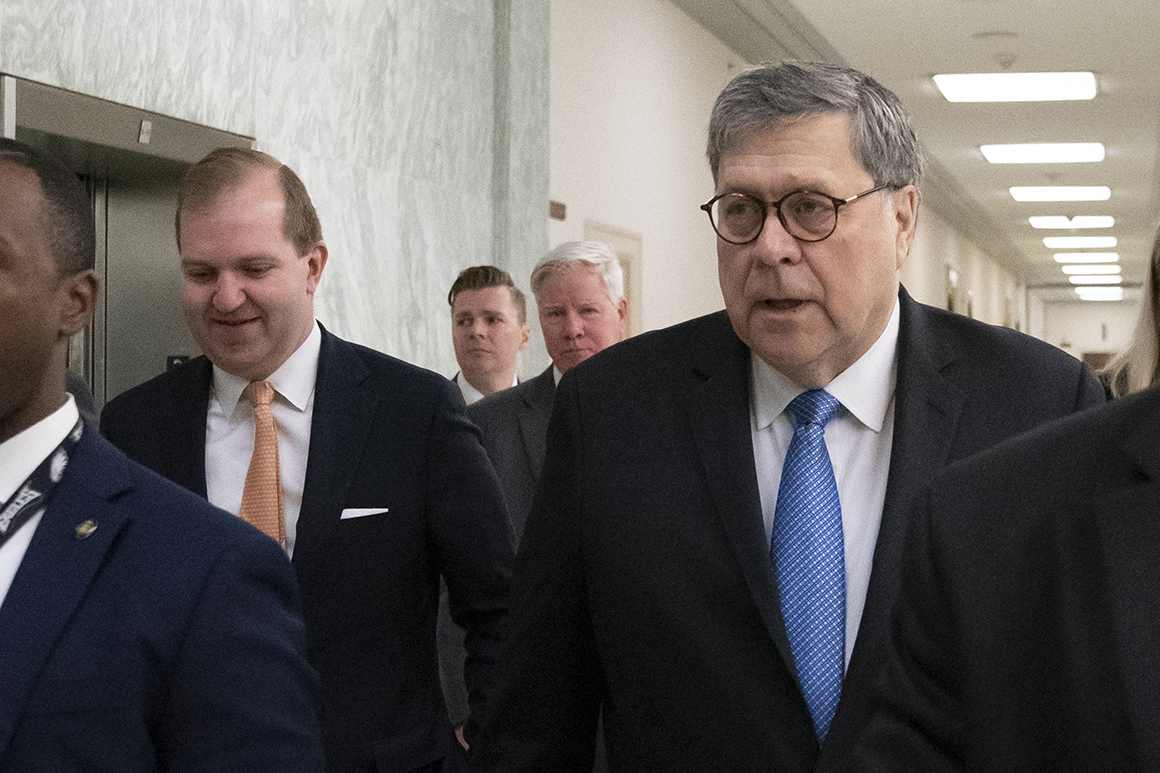 Barr’s appearance, ostensibly to advocate for the Justice Department’s budget, is already slated to feature a raft of questions about his handling of Mueller’s report, which Democrats have panned as an effort to protect Trump from damaging information contained in it. Barr has revealed little of what Mueller found but issued a four-page memo summarizing its conclusions, indicating Mueller "did not establish" that the Trump campaign conspired with Russians to influence the 2016 election.

Though Barr noted that Mueller made no decision on whether to charge Trump with obstructing the investigation, the attorney general, in his memo, announced his own decision to absolve Trump of any allegations of obstruction, prompting howls from Democrats that the move was an effort to whitewash damaging information Mueller found.

Democrats on the appropriations subcommittee questioning Barr intend to press the attorney general on how heavily he’ll redact the report before releasing it to Congress and the public.

Barr’s testimony took on added urgency in light of recent news reports that members of Mueller’s team were frustrated with the attorney general’s summary, claiming it doesn’t accurately represent their 22-month investigation into Russian interference in the 2016 election and potential Trump-Russia collusion. Democrats plan to lean heavily into Barr’s decision-making process in crafting the summary.

Barr told lawmakers recently that he was aiming to release a public version of the report by mid-April. Democrats have demanded that Congress be given the opportunity to see the full, unredacted report and all of its underlying evidence and grand jury information.

Rep. Nita Lowey (D-N.Y.), the chairwoman of the full Appropriations Committee, will also use her opening statement to home in on what she called Barr’s “unacceptable handling” of the report.

“All we have is your four-page summary letter, which seems to cherry pick from the report to draw the most favorable conclusion possible for the president,” Lowey will say. “In many ways, your letter raises more questions than it answers. “I must say, it is extraordinary to evaluate hundreds of pages of evidence, legal documents, and findings based on a 22-monthlong inquiry and make definitive legal conclusions in less than 48 hours. Even for someone who has done this job before, I would argue it is more suspicious than impressive.”

Lowey also plans to hammer Barr on his 2018 memo — written months before he became attorney general — arguing that Mueller’s obstruction investigation was “fatally misconceived.” According to Barr’s four-page summary, Mueller presented evidence on both sides of the obstruction question, but Barr said the evidence was insufficient to determine President Donald Trump’s “intent.”

Rep. Robert Aderholt of Alabama, the top Republican on the panel questioning Barr, said he was concerned that the Mueller report would dominate the hearing and that Democrats would use Barr’s presence as an opportunity to attack Trump.

The attorney general’s appearance on Capitol Hill is expected to generate protests from advocates for the report’s full public release. Demonstrators affiliated with Public Citizen intend to gather outside the House office building where Barr is set to testify.