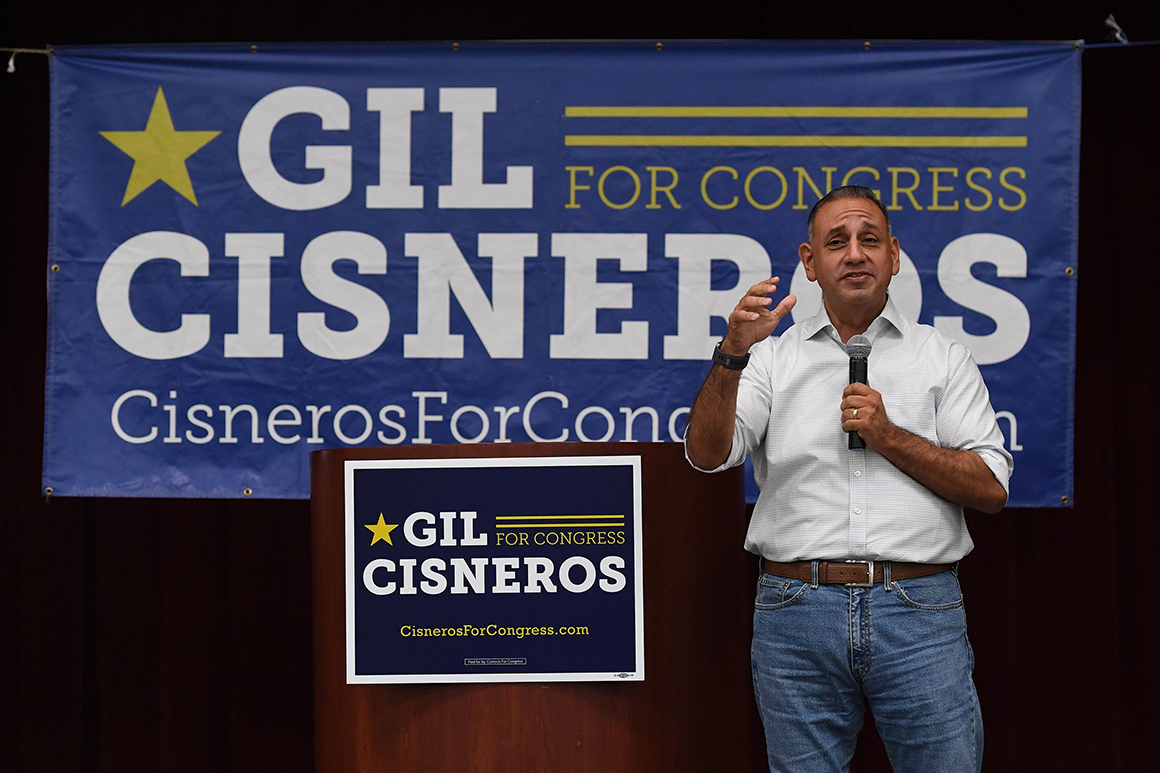 When former Navy officer Gil Cisneros mounted his campaign for retiring Rep. Ed Royce’s House seat in Southern California, he found a clear way to distinguish himself from his Republican rival.

While Young Kim, a former state lawmaker, took in donations from high-profile corporate PACs, including those of Chevron, ExxonMobil and Koch Industries, Cisneros, a Democrat, vowed not to accept any such money.

“We need to get rid of corporate special interest money in politics,” Cisneros said at a candidate forum last year.

But less than six months after winning election in a former Republican stronghold, Cisneros is not exactly keeping his distance from corporate special interests in Washington.

Four lobbyists — who represent major corporate clients including AT&T, Comcast, Microsoft, Pfizer, Verizon and Wells Fargo — hosted a fundraiser for Cisneros late last month at a townhouse on Capitol Hill, according to a Democratic Congressional Campaign Committee list of fundraisers obtained by POLITICO.

The lunchtime fundraiser, hosted by Ingrid Duran and Catherine Pino of D&P Creative Solutions and Dean Aguillen and Moses Mercado of Ogilvy Government Relations, brought in about $15,000 for Cisneros’ reelection campaign, according to a person familiar with the total. The listing for the event noted, “Cisneros for Congress gladly accepts money from non-corporate PACs.”

The event didn’t violate Cisneros’ pledge to swear off corporate PAC money. But it illustrates a larger trend of Democratic lawmakers who have promised to steer clear of corporate PACs allowing the same corporations’ lobbyists to write them personal checks — and in some cases even host fundraisers for them.

Cisneros is one of 43 House Democrats — nearly a fifth of the Democratic caucus — who’ve pledged not to take corporate PAC money, according to End Citizens United PAC, which encourage Democrats not to take such contributions. So have eight Democratic senators as well as Sen. Bernie Sanders, an independent who’s running for president in the Democratic primary.

Two of the lobbyists who hosted the Cisneros fundraiser also hosted one last month for Rep. Xochitl Torres Small (D-N.M.), another freshman who’s sworn off corporate PAC money, according to an invitation obtained by POLITICO.

“Rep. Axne does not take corporate PAC donations, but we are still very hopeful that our friends will show up to help in whatever capacity they can,” Mike Goodman, a Cornerstone senior vice president, wrote in an email, which was obtained by POLITICO. “She is a rising star in a very important state.”

The invitation noted that “Congresswoman Axne accepts noncorporate PAC contributions” and asked for checks up to $2,800 for those attending as individuals or $5,000 for those paying through PACs.

And Mark Kelly, a Democrat running for Senate in Arizona, is one of a dozen congressional candidates running this year who’ve already promised not to take corporate PAC money.

“This campaign is about the people of Arizona, not corporate PACs and the mess they’ve created in Washington,” Kelly said in a statement on his website. “I won’t take a dime of corporate PAC money, and I’ll only answer to Arizonans.”

But Kelly held a fundraiser late last month hosted by five lobbyists at the offices of the lobbying firm Capitol Counsel, which represents ExxonMobil, JPMorgan Chase, Lockheed Martin and other big corporations, according to an invitation obtained by The Intercept.

Spokespeople for Cisneros, Torres Small and Axne didn’t respond to requests for comment. Neither did a Kelly campaign spokesman.

While a handful of members of Congress have refused to take corporate PAC contributions for years, there are more now than ever before as the issue has become a progressive litmus test.

Some lawmakers who’ve taken the pledge have defended their decisions to reject corporate PAC money while accepting money from lobbyists and other PACs.

“I’ve never thought that the lobbyist definition was particularly meaningful,” said Rep. Tom Malinowski (D-N.J.), who was once a lobbyist himself for Human Rights Watch, a nonprofit.

Malinowski has made a point of meeting with representatives of corporations even though he doesn’t take their PAC money. “I just want to be able to evaluate their requests on the merits,” he said.

But Democrats on K Street are frustrated by what they view as arbitrary restrictions on which kinds of money lawmakers will take and which kinds are forbidden, according to interviews with a half-dozen Democratic lobbyists.

While Democrats who’ve taken the pledge are allowed to accept contributions from trade association PACs, for instance, End Citizens United PAC has circulated a list of 43 trade group PACs whose corporate ties might make accepting such money problematic for those Democrats. The list, which was obtained by POLITICO, includes the PACs of lobbying groups such as the American Bankers Association, the American Hospital Association and the National Association of Chain Drug Stores. One lobbyist dubbed it the “trade association naughty list.”

“There’s no end to it,” said Steve Elmendorf, a well-known Democratic lobbyist. “Next year somebody else is a demon.”

Democrats’ rush to reject corporate PAC money falls heaviest not on lobbyists like Elmendorf, who has continued to write personal checks to Democrats who won’t take such contributions, but on in-house Democratic lobbyists for big corporations. Some of those lobbyists have found it harder to mingle with House Democrats when they can’t attend fundraisers by writing a corporate PAC check to get in the door.

“It’s certainly limited our ability to get to some of these members,” said one Democratic in-house lobbyist for a Fortune 500 company with a corporate PAC.

To compensate, Democratic lobbyists have stepped up meet-and-greet events held at lobbying firms and corporate offices in Washington at which lobbyists don’t have to write a check to attend. And they’re trying to persuade congressional candidates and members of Congress who haven’t yet sworn off corporate PAC money ot to take the plunge.

“We are trying to educate Members about the importance of employee-funded PACs to the campaign finance system,” Catherine McDaniel, the president of the National Association of Business PACs, a trade group for corporate PACs, said in a statement.

Lobbyists point out that corporate PACs are funded by companies’ employees and executives, not companies themselves, which are banned from donating directly to candidates or PACs. (They’re allowed to give to super PACs, though.)

Lawmakers who have chosen to forgo corporate PAC money counter that it’s the companies that decide how the cash is spent.

When employees donate to “a corporate PAC, they don’t determine where their money goes thereafter,” freshman Rep. Dean Phillips (D-Minn.) said in an interview.

Freshman Rep. Kim Schrier (D-Wash.), for instance, has a staffer who helps evaluate whether each trade group that wants to contribute to her campaign will be allowed to do so. She decided to accept contributions from trade groups representing apple and wheat growers, which have a substantial presence in her district, but drew the line at the sugar industry, she said in an interview.

“I came down on the ‘no’ side for sugar, because I’m a pediatrician and my general inclination is that sugar’s not so good for myself,” she said.

Several Democratic lobbyists see more than a little hypocrisy in how lawmakers are adhering to their pledges.

One Democratic candidate running last cycle who refused to take corporate PAC money nevertheless approached executives at a Fortune 500 company and asked them to write personal checks to his campaign, according to a Democratic in-house lobbyist for the company with direct knowledge of the incident.

“It is a ridiculous double standard,” the lobbyist said.

An in-house lobbyist for another company said he’d encouraged executives not to give to Democrats who won’t take corporate PAC money. “Our position thus far is if you don’t feel like our employees’ money is good enough for you, our executives’ money is not, either,” the lobbyist said.

Schrier, the Washington state congresswoman, said her fundraising consultant would prefer it if she took corporate PAC money but that she isn’t going to change her mind.

“If that is really going to make the difference of winning the next election, it’s OK,” she said. “I think the people of my district are smarter than that.”